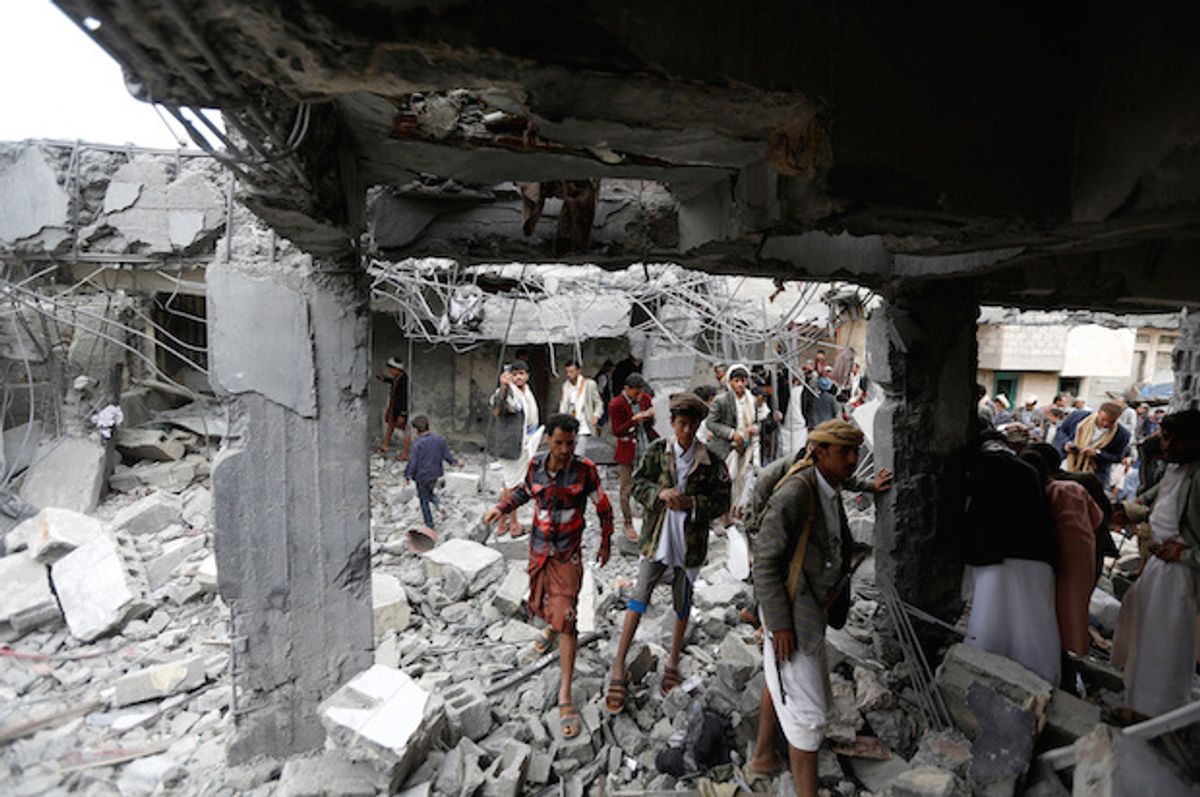 Yemenis gather at a building destroyed by Saudi-led air strikes in the northwestern city of Amran, Yemen on Sept. 8, 2016 (Reuters/Khaled Abdullah)
--

The pressure on the Obama administration to stop selling weapons to Saudi Arabia is mounting.

Senators from both sides of the aisle introduced a joint resolution on Thursday, hoping to block a large U.S. arms deal with Saudi Arabia.

Murphy warned in a statement that the "war in Yemen, funded by the U.S., has become a disaster that is making our country less safe every day."

“Thousands of civilians are being killed, and terrorist groups inside the country, like al Qaeda and ISIS, are getting stronger," he added. "Until the Saudis' conduct changes, the U.S. should put a pause on further arms sales."

The arms deal they are hoping to block includes $1.15 billion worth of tanks and other military equipment. It was announced by the Pentagon in August.

Since President Obama took office in 2009, the U.S. has done more than $110 billion in arms deals with Saudi Arabia. Amnesty International has condemned the Obama administration for its "astounding," "vast flood of weapons" to repressive regimes in the Middle East, accusing the U.S. of "hypocrisy."

“Selling $1.15 billion in tanks, guns, ammunition, and more to a country with a poor human rights record embroiled in a bitter war is a recipe for disaster and an escalation of an ongoing arms race in the region,” Paul said.

On the same day the senators introduced the resolution, the U.S.-backed Saudi-led coalition bombed an apartment building in Amran, Yemen, north of the capital Sanaa. At least nine civilians, including four children, were killed in the attack, and five more were injured.

“In Yemen, a Saudi coalition of fighters is unjustly killing civilians while at the same time not doing enough to address terrorism," Sen. Franken said in a statement. "This is dangerous for the Middle East, for our other allies and for our nation."

Murphy also took to Twitter to condemn the arms deal.

"Currently, weapons we provide to Saudi Arabia are being used to wage a war in Yemen that has killed civilians and aided our terrorist enemies," he wrote.

"The war in Yemen has become a disaster," the Connecticut senator warned.

This is not the first time U.S. lawmakers have tried to take action to block such arms sales.

Salon reported in April on S.J.Res.32, another joint resolution sponsored by Murphy. This legislation would limit the transfer of air-to-ground munitions to the Saudi monarchy. Since it was introduced, however, it has not gone anywhere.

"Sen. Murphy is still pushing for his other resolution as well — however that was slightly different in that it wasn’t pegged to one specific weapons sale, it was more general about air-to-ground munitions sales going forward," Harris said via email.

"The previous one placed conditions on futures sales, where today’s resolution would halt the previously noticed sale," he noted.

Salon has reported on Rep. Lieu's many attempts to raise concerns about U.S. support for the brutal war in Yemen.

Since March 2015, a coalition of Middle East countries led by Saudi Arabia, the richest country in the region, has pummeled Yemen, the poorest.

The U.N. has repeatedly said the coalition is responsible for approximately two-thirds of civilian casualties. It has documented coalition attacks on a slew of civilian areas, including hospitals, schools, refugee camps, markets, civilian homes and more.

A minimum of 10,000 Yemeni civilians have been killed or wounded in the war, according to the U.N. humanitarian coordinator.

The U.S. and U.K. have sold many billions of dollars worth of weapons to Saudi Arabia, and have supported the coalition with intelligence and other forms of military assistance. American and British military personnel were even in the command room with Saudi bombers, and had access to a list of targets.

Oxfam applauded the senators' new resolution. “For well over a year the people of Yemen have lived under constant bombardment, facing a humanitarian crisis that only continues to grow. The $1.15 billion arms sale to Saudi Arabia put into motion by the Obama administration only adds fuel to the fire," Oxfam America senior humanitarian policy advisor Scott Paul said in a statement.

"Today, Congress has taken a positive step towards easing the burden for Yemen’s people," he added. "Oxfam fully supports the joint resolution introduced by Senators Paul, Murphy, Franken and Lee to stop the sale of these weapons to Saudi Arabia. Congress’ silence would signal to the Yemeni people that US support for the Saudi-led coalition in Yemen is unconditional – no matter how cruel the parties’ methods of warfare or how unwilling they are to make peace."

The international humanitarian organization noted that more than 14 million Yemenis are going hungry, and one in three Yemeni children under five years old is suffering from acute malnutrition.

It warned, "As long as the Saudi-led coalition continues its campaign in Yemen this humanitarian crisis will continue."