How to be a man like Willy Wonka: Gene Wilder's signature role was my role model of masculinity

Cultured, playful, clever and confident, Willy Wonka always had a plan — exactly the kind of man I wanted to be 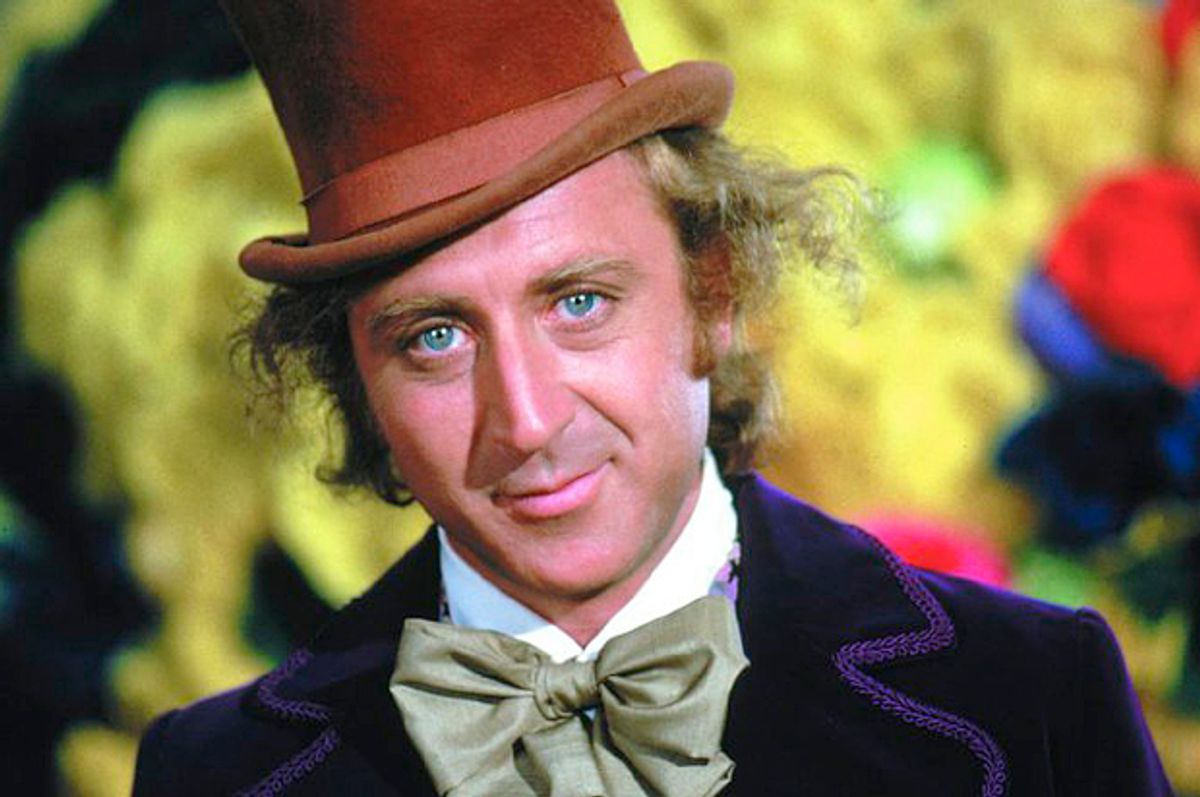 When I learned Gene Wilder had died, I felt the loss of not just some admired celebrity but of something like a father figure. Or perhaps not exactly Gene Wilder the actor, but Wilder as Willy Wonka. And maybe not precisely a father figure so much as an unrealized ideal of masculinity. An unconventional claim, I guess, so let me explain.

At some point every boy wonders how one goes about being a man and what sort of man he’ll be. Our culture, American culture specifically, sends out some pretty weird signals to boys. I’d like to think we’re getting better at it, or at least more aware, and that toxic masculinity is becoming less prevalent than it used to be. Still, one only has to look at popular language for examples of how we encourage boys to deny their more whimsical natures: “Man up,” we say, meaning toughen up, don’t allow any emotion to get in the way of what needs doing. Set aside those softer, “feminine” emotions. Our heroes still tend to be rugged individuals who solve conflict via violence.

I’m no psychologist but I have always assumed the father’s presence is especially influential, especially needed, during those pre-adolescent years when the testosterone starts to kick in, when the question of what-makes-a-man stirs up into a kid’s mind as a conscious issue. Perhaps it seems to me “especially needed” at that age because during those years in my own life my father wasn’t there to provide guidance. He was incarcerated, and I had to seek examples on my own.

My father wasn’t a violent man or a drug user or some burglar sporting poorly made tattoos so much as a country boy who came to the city in the '60s to start a family and make good money. He found that a man willing to transport packages from one place to another without questioning people he considers friends could make some solid extra cash. When one of those friends found himself in trouble with the law he could lessen his punishment by pointing out all the other friends. Suffice to say that through my middle and half of high school years, my father became a voice on the phone every Sunday evening, a handmade gift card in the mailbox every birthday, and sometimes there in the flesh for an hour or two at a steel table in a large sad room surrounded by numerous other felons and their families, whose children looked as shy and uncertain and sometimes even bored as I felt. Even at that impressionable age I understood it was pointless to look around that room for suitable heroes; the Clyde Barrow-type has never held any romance for me.

Like most kids in the '70s I’d seen "Willy Wonka and the Chocolate Factory "several times on TV, usually around Christmas or Thanksgiving. And like most kids I thought the movie pure magic — probably the height of cinema, with the animated "Rikki-Tikki-Tavi" running a close second. And my father left us a parting gift before he began his sentence: a rare piece of new technology called a VHS player. He had picked it up either by winning a golf tournament or a bet or by chancing upon a great deal. Its origins changed depending on his mood and my mother consistently asserted she didn’t know honestly and pointed out that “sometimes with your father it’s just pointless to ask.” The VCR came with a couple of tapes already: "Fantastic Voyage," with Raquel Welch fascinating in a body suit for reasons I didn’t quite understand, and "The Day the Earth Stood Still." Also included was a blank cassette for recording, and "Willy Wonka and the Chocolate Factory" was our first. We could watch it as much as we liked. We could fast-forward past the commercials. My brother and I became so familiar with the movie that we could speak the lines with the inflections of the actors and sing along with the Oompa-Loompas.

But it was Wilder’s Wonka who demanded my full attention; he may well have been the most fascinating man on the planet. More than the wish to undergo the adventure as Charlie Bucket, I wanted to become like Willy Wonka. A wit and musical; clever as Odysseus; light on his feet, intelligent and knowing — a cultured man who never denies the opportunity for bedlam (“A little nonsense now and then is relished by the wisest of men,” he pronounced, and the line steeped itself like an arrow to my heart). Perhaps most importantly, he is always in control, outwardly confident no matter what transpires. Every little thing he does, we learn, has purpose. That a full-grown man still possessed a boy’s dreamy mind, that a childlike imagination could be limitless when matched with adult know-how, made magic in my 10-, 12-, 13-year-old eyes. I was unaware of any other man like that.

As for his masculinity — as opposed to being merely entertaining — perhaps it’s worth recalling that there was a period in the ’70s and even early ’80s when male sexiness wobbled somewhat from the standard suave hunks, when Woody Allen and Steve Martin were considered sexually appealing, and even People magazine once identified Alan Alda as the Sexiest Man Alive.

Wilder as Wonka was playfully seductive. His own man and a man-with-a-plan, a plan his followers learned only on a need-to-know basis. From that opening scene in which he appears as a fumbling cripple, only to fall forward and somersault with the grace of a ballet dancer in greeting the crowd, reality is put into play, a funhouse in which nothing is as it seems. Wonka’s the pied piper to children and adults alike; his character echoes that of the philosopher-poet, the artist, not to mention the mythical trickster figure — simultaneously giving voice to convention and bourgeois norms even as he subverts them. This leads to some of his most worthy quotes, such as when Mrs. Gloop or Mrs. Teevee implore their host to take control of the latest moment of chaos, and he responds in that unenthusiastic deadpan tone, “Help. Police. Murder,” or “Stop. Don’t. Come back.” His rascal grasp of language inspired mimicry, and many times my brother and I tried for sentences that echoed his “So much time and so little to do. Wait a minute. Strike that. Reverse it. Thank you.”

The rebel poet and pied piper; he’s like Jim Morrison, only with all the light let in. Or mid-’70s David Bowie, if you discard all the cocaine, exuding technicolor instead of the Thin White Duke’s monochromatic aesthetic.

But in retrospect maybe it’s worth asking: Is that light actually let in or does it merely bounce off a hard mirror surface? As a boy I took it for granted that each kid who failed his or her moral lesson suffered nothing more than shame: surely Veruca Salt luged down the garbage chute on one of the incinerator’s off-days, and Mike Teevee and Violet “You’re turning violet, Violet!” would be restored to their normal selves by the helpful Oompa Loompas. Yet when I reflect on their fates as an adult, it’s clear there’s no textual reason for assuming so. Maybe I’m wrong and those felons in the big house did manage their pull on me and Wonka is actually a dangerous lunatic, callously single-sighted in pursuit of his goal to identify an heir pure enough to deserve his ultimate gift at movie’s end. So long as we’re looking down this road why not question the entire role of those Oompa-Loompas: What’s going on there, Wonka? Are they the magical and mysterious Greek chorus that Wonka saved from the pernicious kinds? Or is this a prime example of the colonizer exploiting the natives, a stark portrait of the greedy capitalist taking advantage of disorganized labor? Wonka could be seen as an irredeemable megalomaniac, considering how he explains to Charlie his reasoning behind the entire thing:

Who can I trust to run the factory when I leave and take care of the Oompa-Loompas for me? Not a grown-up. A grown-up would want to do everything his own way, not mine.

Such ramifications never occurred to my boy-self watching. My eyes remained on Wonka and his wonder. Like Wonka, I wanted to be at ease in all situations; to pronounce lyric aphorisms, ready always with a clever line; I wanted to dance or dream or sing or indulge in nonsense whenever whim took hold. Through Willy Wonka I intuited what it meant “to be your own man,” one who doles out respect to men, women and children so far as they earn it. I even liked the funny hat.

But anatomy is destiny, as the saying goes, and you’re either clever and witty or you’re not; it can’t be faked. (I didn’t know then that most of Wonka’s great lines were quotations from Shakespeare, Wilde and poet Arthur O’Shaughnessy, among others.) It’s difficult to inhabit the Wonka ideal when nature has built you like a small-scale defensive end, picking up nicknames like “Lil’ Tank” and “Arnold Dwarfenegger.” (I topped out at 5 feet 8.) Most of my teens and early 20s passed on soccer fields, in swimming pools, in the gym and locker room. To quote poetry or sing hymns to pure imagination, to express sensitivity to the arts beyond Top 40 or classic rock wasn’t encouraged by my peers; to be articulate from the heart or on matters greater than sport or base instinct made your sexuality suspect (and thus your manhood), and quickly I learned that to be accepted I needed to temper such interests to time alone. I kept my personal Wonka-ness as just that — personal — and wouldn’t quite embrace my idiosyncrasies and feel comfortable in my own skin — to be my own man — until well into my 20s. A late bloomer.

Still, the ideal of Wilder’s Willy Wonka remained within me, and without the impression of his example at that uncertain age I have to wonder whether the 48-year-old man I am today would be profoundly different from who he has turned out to be. Gene Wilder made it to 83. That seems like a long life. So much time and so little of a man he made of himself. Wait a minute. Strike that. Reverse it. Thank you.

Kirby Gann’s most recent novel, "Ghosting," was named a Best of Year by Publishers Weekly and flavorpill.com. A freelance editor and book designer, he is also Series Editor of Ig Publishing's Bookmarked titles — brief books in which authors address, in any way they desire, a classic work that proved formative to their writing. His most recent stories appear in Ploughshares and Post Road. Gann and his wife Stephanie live in Louisville, Kentucky, where he is on faculty at the low-residency MFA Program at Spalding University.