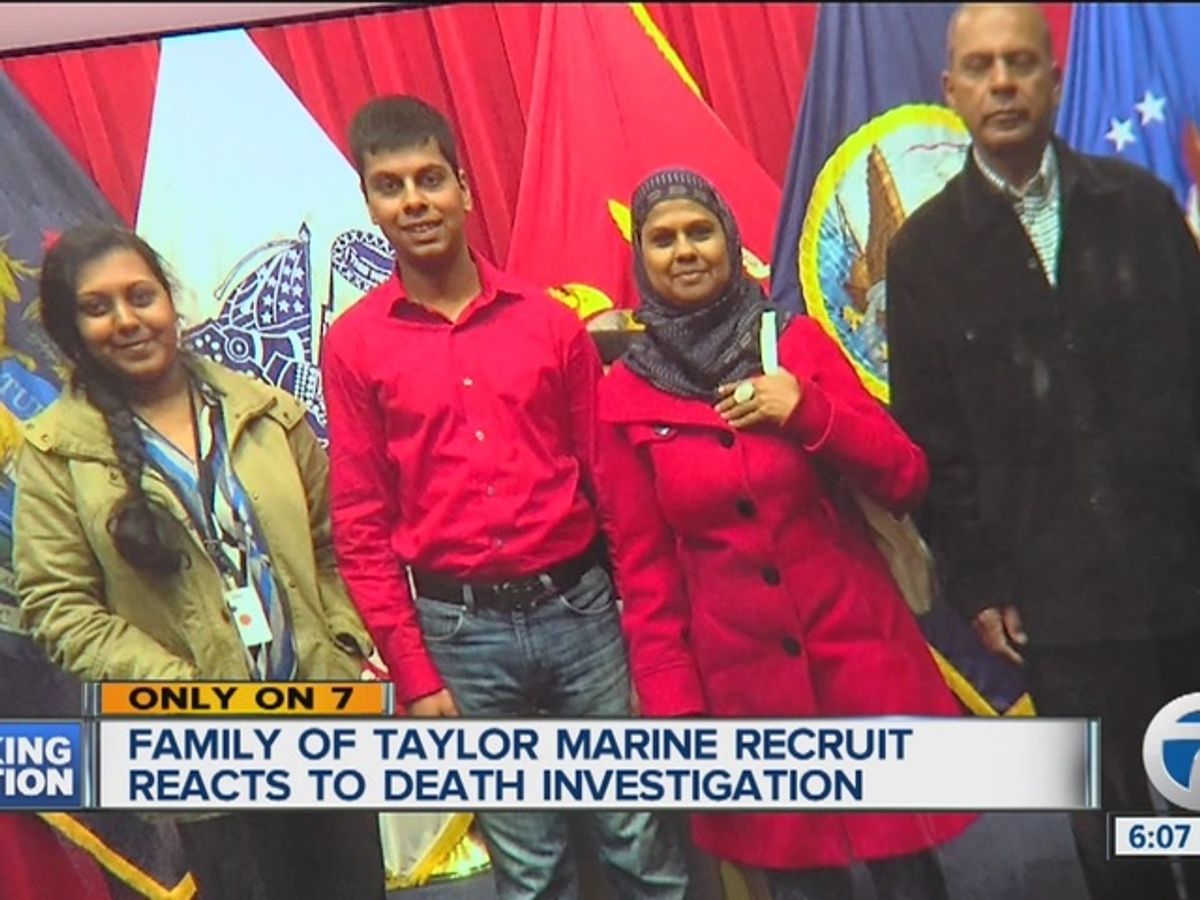 Twenty year-old Pakistani-American Muslim Raheel Siddiqui left his robotics and engineering program at the University of Michigan and arrived at Parris Island as a U.S. Marine Corps recruit on March 7. By March 18, he had leapt 40 feet to his death after enduring anti-Muslim hazing and physical abuse. Now, up to 20 Marines face criminal charges or administrative action after three investigations found multiple violations of policies and procedures at the key recruiting outpost.

The young recruit from Taylor, Michigan, wanted to be a jet mechanic in the Marines, and eventually an F.B.I. agent. But Siddiqui had been just 11 days into his training with Kilo Company, known unofficially as “The Thumping Third” for its rough treatment of recruits and drill instructors alike, when he jumped to his death off the third floor of a Marine barrack on March 18. He death was ruled a suicide, but Siddiqui's family insisted from the beginning that the former high-school valedictorian would not have taken his own life unless under extreme duress.

On April 4, the Siddiquis’ congresswoman, Debbie Dingell, wrote a letter to the Marine Corps commandant demanding answers, asking if hazing had been a factor in the young recruit's death. On Thursday, the Marines released a redacted investigative report by Maj. Gen. James Lukeman of the service's training and education command in Quantico, Virginia. Dingell released a statement saying she had met Thursday with Marine Corps Commandant General Robert Neller and learned that 20 personnel could face court proceedings or administrative discipline as a result of the internal investigations.

Investigators found Marines operating with impunity in an environment lacking in supervision and proper leadership, according to the Wall Street Journal, who spoke with Marine officials who described details of the completed investigations. Siddiqui had reportedly threatened to kill himself within a week of his arrival on Parris Island as part of the 3rd Recruit Training Battalion after enduring islamophobic hazing from one unnamed drill instructor in particular. The young recruit had no history of mental illness before joining the Marine Corps. The Washington Post summarized what the internal investigations found:

Siddiqui was set to speak to the mental-health unit on base and a recruit liaison service the day following his claims but recanted them before speaking to the unit. The next day, Siddiqui was evaluated by the mental-health unit and returned to training. According to officials, however, Siddiqui claimed sometime before returning to training that he had been abused by his drill instructors — a claim that was ignored by higher-ups in Kilo Company.

The Wall Street Journal also reported that the unnamed instructor had previously been accused of putting another Muslim recruit in a dryer:

At one point, he accused the recruit of helping perpetrate the Sept. 11, 2001, attacks and then switched on the machine, causing the 6-foot, 157-pound recruit to spin around inside, an investigation of the 2015 incident found.

According to those Marine officials, at least one other recruit heard the nearly two-hour episode from the nearby barracks quarters and recounted that the drill instructor could be heard asking that recruit: “Why are you even here? You’re gonna kill us the first chance you get, aren’t you, you terrorist? What are your plans, are you a terrorist?”

Marine officials fired the three most senior Marines in charge of Siddiqui's unit and removed from duty each of the other commanders and senior enlisted leaders identified for possible charges or administrative punishment.