The phantom earpiece phenomenon: Why presidential candidates are consistently accused of cheating during debates 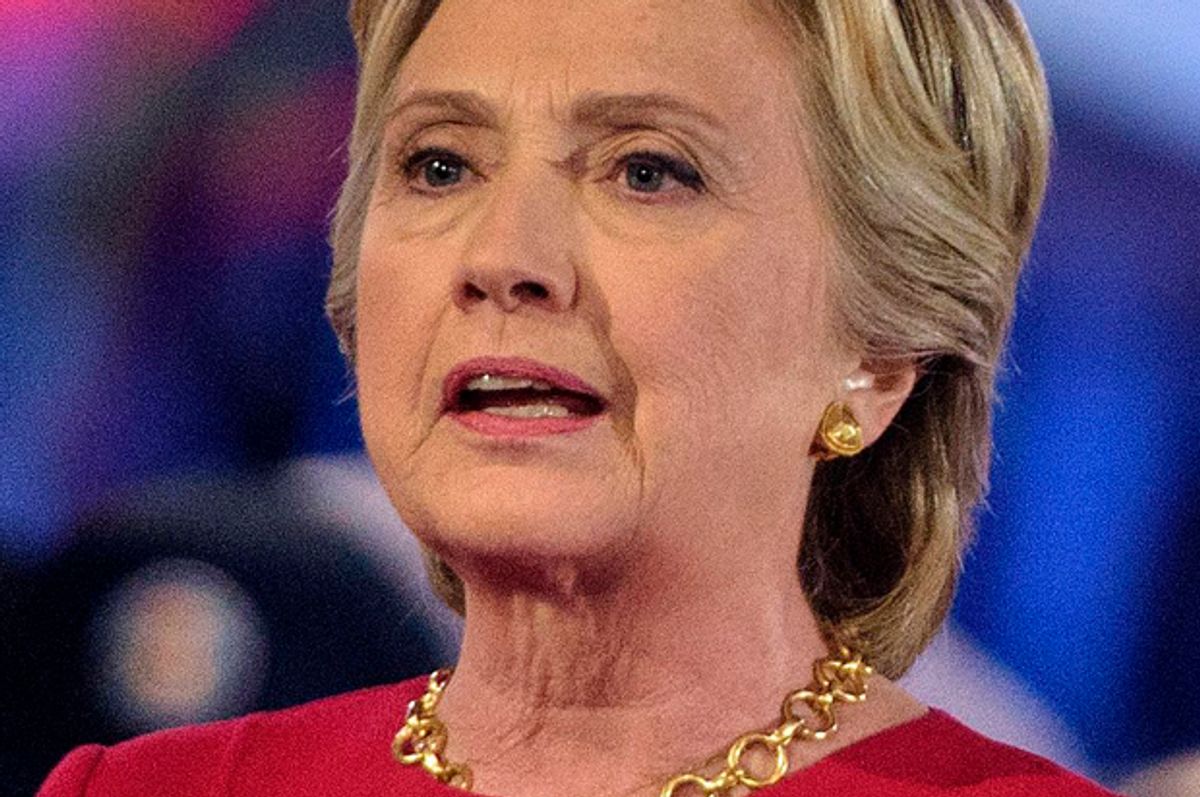 The banner headline on the Drudge Report the morning after Wednesday’s presidential forum screamed “HILLARY AND THE EAR PEARL.” The story it linked to was from Infowars.com, the website of radio host Alex Jones, a crazy person who believes the government has a special tornado weapon and used it to attack Oklahoma in 2013. Citing a tweet from actor and right-wing troll James Woods, Infowars wondered if Clinton had been “wearing an earpiece during last night’s presidential forum,” as indicated by pictures that “appeared to show Hillary with some kind of flesh-colored device embedded inside her ear.”

So was it a flesh-colored earpiece as Infowars insisted? Or was it a pearl-colored earpiece as Drudge claimed? No one can say, but the ad hoc investigative group of conspiracy theorists and crackpot celebrities seems pretty convinced that Hillary Clinton had someone secretly feeding answers into her ear during the forum. The “evidence” was convincing enough that Donald Trump’s son — the elephant-butchering one, not the off-Broadway “American Psycho” one — tweeted out a link to the Infowars story.

So congratulations, everyone: we’ve officially reached the “Presidential Candidate Cheats Via Secret Radio Technology” stage of the 2016 election. It’s arrived a bit early this year, but this conspiratorial story line has become a recurring fixture of presidential campaigns thanks to the internet’s inexhaustible capacity to prey on gullibility and partisan reflexes.

The “secret earpiece” story made its first big splash in the latter stages of the 2004 presidential election, when blogger Joseph Cannon noticed an odd bulge in the back of George W. Bush’s suit jacket during an early October debate. “Bush seemed to have a wire, or an odd protrusion of some sort, running down his back,” Cannon wrote. “Apparently, Fearless Leader used an earpiece during the confrontation.”

The speculative accusation might have remained confined to the liberal blogosphere had it not been for the efforts of the website you’re reading at this moment, Salon.com, which published half-skeptical write-ups of the circumstantial evidence surrounding the Bush “wire” and contacted NASA scientists for image analysis of the “Bush bulge.” From Salon, the story jumped to The Washington Post and The New York Times, which managed to obtain derisive denials from Bush campaign staffers. The “bulge” even became the centerpiece of a David Letterman riff. Fervent speculation aside, no direct evidence was ever produced indicating that Bush was wired during his debate with John Kerry. After Bush won re-election a month later, the issue receded back into the shaded corners of the internet.

Almost exactly four years later, as a young Democratic senator from Illinois took to the debate stage, it was the conservative blogosphere that found itself on secret earpiece patrol. During the Oct. 7, 2008, presidential debate, blogger Ann Althouse wrote that she had “noticed that Obama was wearing an earpiece” and posted a photo of the alleged device in Barack Obama’s ear. She quickly reconsidered her analysis and recognized that she was looking at light reflecting off Obama’s ear but left open the possibility that a secret earpiece might still exist: “Just because the thing I saw wasn't there doesn't mean there wasn't something there that I didn't see.”

The 2012 election was largely free of any prominent earpiece speculation, though some chain emails bounced around, accusing Obama of wearing an earpiece and having a suspicious Bush-like suit bulge. That cycle’s primary example of overwrought “he’s a cheater” attacks were directed at Republican contender Mitt Romney, whom liberal bloggers accused of consulting crib notes during the first debate with Obama (Romney was actually holding a handkerchief).

The relative lack of earpiece mania in 2012 has been more than compensated for in 2016, with this ridiculous story about Hillary Clinton’s clandestine listening device featured prominently on one of the world’s most heavily trafficked political websites and endorsed by the son of the Republican nominee. Other Clinton-related conspiracies have proved to be remarkably persistent this cycle (her allegedly failing health being the most prominent among them). So there’s an excellent chance that this one will stick around, too.

The question that arises from all this is why the “earpiece” phenomenon keeps popping up election after election, in defiance of consistent debunking and a lack of evidence to support the allegations. “These sorts of beliefs are dependent on if you have a conspiracy worldview, and then on your partisanship,” said Joseph Uscinski, a professor of political science at the University of Miami who’s written extensively about political conspiracy theories. “People point fingers at the other side.”

Basically, if you’re already predisposed to believe that a candidate from the other party is going to cheat, then you’re more likely to take at face value an allegation that he or she cheated during a debate. When someone presents you with grainy screen captures of George W. Bush or Hillary Clinton and claims that they show telecommunications equipment hidden on their bodies, your partisanship enables you to bridge the sizable gap between the poor evidence and the firm conclusion that someone offstage was whispering into the candidate’s ear.

These cheating allegations tend to take the form of a secret earpiece simply because that’s really the only way someone participating in a nationally televised presidential debate could conceivably cheat. “It’s just like when Hillary Clinton goes on [“Jimmy Kimmel Live”] and opens the pickle jar,” Uscinski explained, referring to a humorous feat of strength that Clinton performed to mock questions about her health and that conspiratorial conservatives claimed was rigged. “The only way she could have cheated in that test . . .  was to have a preopened pickle jar. It’s sort of obvious that if people are going to be predisposed to thinking that cheating was taking place, that would be the method in which it would be done.”

I don’t know whether Matt Drudge and Donald Trump Jr. actually believe that Clinton was wired up during this week’s president forum, but they’re nonetheless legitimizing that idea in the minds of people who are already apt to believe it.