On the eve of the 15th anniversary of 9/11, the Aleppo gaffes show we have learned nothing

The foggy aftermath of Gary Johnson's "What is Aleppo?" gaffe revealed how little U.S. policymakers know about ISIS 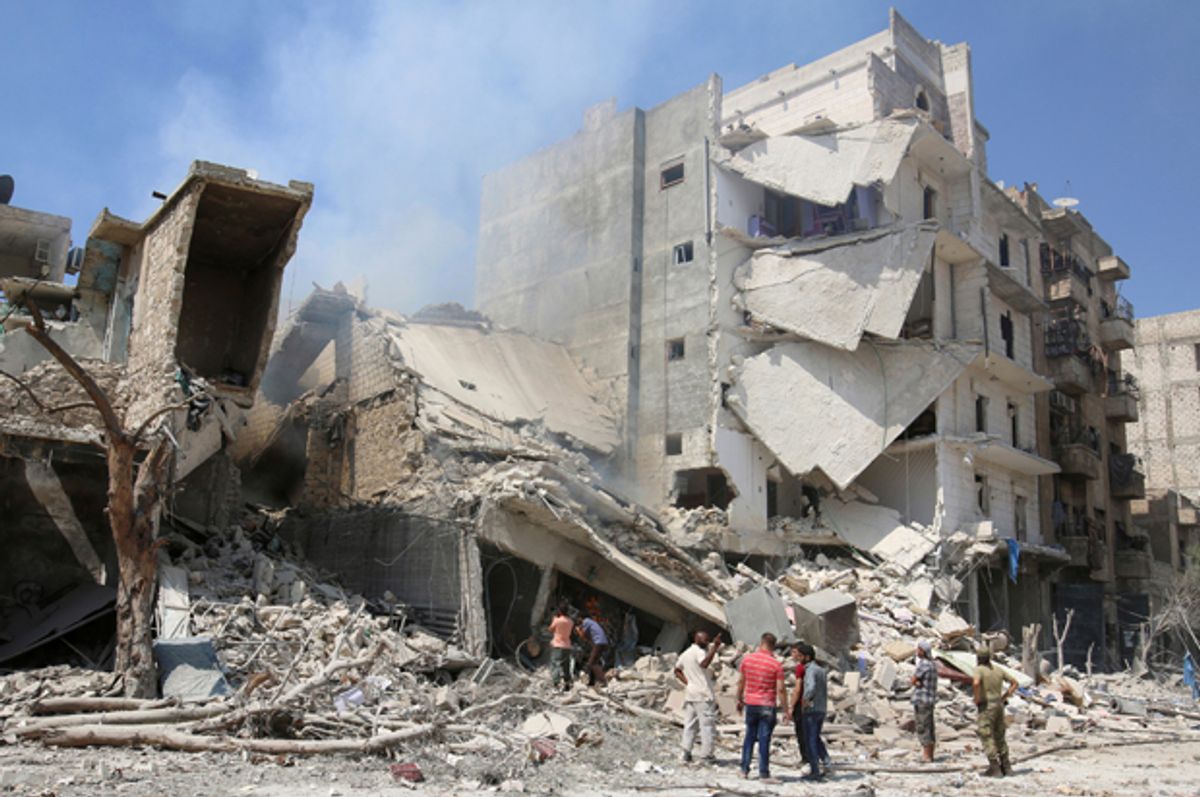 The 2016 campaign story of the week seemed to be Gary Johnson’s blunder during an MSNBC interview when he shockingly asked, “What is Aleppo?” That story, though, is really only the tip of the iceberg. The real story is the response to his gaffe. Quick to jump on the third-party presidential candidate for being woefully unprepared, political insiders and the media made a far worse error — the exact sort of error that led to our disastrous response to the 9/11 attacks.

Johnson couldn’t answer the question about what he would do about Aleppo. It’s bad news that a presidential candidate, even one from a third party with no shot of winning, could not recognize the name of one of the major cities in civil war-stricken Syria. This suggests that Johnson simply isn’t following the news related to one of most significant international crises today.

He later corrected his gaffe by saying he thought Aleppo was an acronym.  But the good news, is that Johnson didn’t pretend to know what it was. He didn’t just make something up or blather something incoherent as we might expect Republican presidential nominee Donald Trump to do.

Johnson confessed ignorance, which shows a degree of integrity.

Not so with the corporate media and political insiders.

The New York Times committed the most egregious of the media mistakes. It chided Johnson for being wrong, then got it wrong itself. It started by describing Aleppo as the “de facto capital of ISIS." (That would be Raqqa.) The Times then corrected that gaffe to state that Aleppo was the capital of Syria. (It is actually Damascus.) The Times finally changed its description of the city to simply be a “war-torn Syrian city.” As Salon's Ben Norton reported, “There were five revisions to the Times story from 9:18 a.m. to 12:18 p.m. EST.”

On corporate TV news media, Joe Scarborough of MSNBC brought on Christopher Hill, the former U.S. ambassador to Iraq, who had fun mocking Johnson but also incorrectly identified the city: “But the capital of ISIS — very much in the news, especially in the past two days, but for last two years. And for him to draw that kind of blank — and, by the way, boy was that a blank stare on his face.” To make it worse, he wasn’t corrected.

Both the corporate media and the political insiders it covers were simply wrong about basic facts regarding ISIS and the Syrian civil war. Not a little wrong — completely wrong. What’s worse is that these mistakes then go on to shape public perceptions. They fuel ideas about whether we should have “boots on the ground” in Syria and how we should handle the threat of ISIS.

But if we have no clue what these threats even are, how can we possible come up with a reasonable response?

The attacks on the United States on 9/11 were a tragedy, but our response to them was a full-blown catastrophe. Even more important, our response was based in large part on a lack of knowledge of the basic players and a mistaken sense of geographical connections.

Consider that George W. Bush — who in 1999, as the Intercept reminds us, failed a pop quiz about the names of global leaders — ordered the disastrous invasions of Afghanistan and Iraq based on a series of mistaken associations and false “intelligence.” Now there seems to be significant evidence that many members of the Bush administration had been well aware that they were promulgating lies – but they were also surrounded by a team willing to accept the lies as truths.

The Bush administration was enabled by representatives of a corporate media all too happy to swallow their lies and ramp up the public for the war effort. As Raymond Bonner reported for The Atlantic, after the 9/11 attacks “journalists were swept up in the national feelings of fear and outrage — and failed to do their job.”

Recall from media coverage and political spin efforts the almost immediate association made between the 9/11 attackers, al-Qaida, the Taliban and the Afghan people.

Yet not one person on the 9/11 flights was Afghan or affiliated with the Taliban. The majority of the attackers were from Saudi Arabia. But those facts didn’t stop the association between Afghanistan and 9/11.

The rush to connect the Taliban with al-Qaida led to the worst possible outcome, since rather than negotiate with the Taliban, the United States pursued an aggressive push for war. As Foreign Policy Journal reported, members of the Taliban showed significant interest in handing over bin Laden; they just needed to be given a chance to do so while saving face.

Meanwhile, the U.S. media reported that the Taliban were intransigent. CNN, for instance, “reported that the Taliban [were] ‘refusing to hand over bin Laden without proof or evidence that he was involved’ in the 9/11 attacks.” But the truth was, as Abdul Salam Zaeef, an ambassador to Pakistan, explained, “deporting him without proof would amount to an ‘insult to Islam.'” But, “we are ready to cooperate if we are shown evidence,” he added. That interest in cooperation was absent in the media and political rhetoric because the truth of a collaborative Taliban didn’t match the desire for war.

The links between 9/11 and the Iraq War display an even greater breakdown in knowledge. CNN later reported that Bush and his team made 935 lies to the U.S. public in the two years from 9/11 to the start of the Iraq War. Those lies got media coverage, which then led to a massively misinformed public.

In 2003 the Program on International Policy Attitudes at the University of Maryland found that a significant number of U.S. citizens linked Saddam Hussein, the former Iraqi president, to 9/11 and al-Qaida to Iraq. There was also widespread misinformation about hidden “weapons of mass destruction” having been found in the country after the U.S. invasion, when they had not been. Twenty-five percent of those surveyed thought there was worldwide support for the war. Only 30 percent of those surveyed had none of these misperceptions.

It probably comes as no surprise that Fox News viewers scored the worst on misperceptions, with 80 percent of this group having at least one false belief about the war.

Both right after 9/11 and today political leaders and the media are too often misinformed on key facts central to issues being discussed. It’s not that they don’t know; it’s that they are wrong.

Thus, there is a significant gap between expressing Gary Johnson-like lack of knowledge and Christopher Hill-like mistakes. As scholars Brendan Nyhan and Jason Reifler have pointed out, there's a huge difference between being uninformed and misinformed. Folks who are uninformed can learn. Those who are misinformed are wrong. Nyhan and Reifler explained that misperceptions are extremely difficult to correct. It is far harder to change false beliefs than it is to educate someone in the first place.

As we consider the 15th anniversary of the 9/11 attacks, we must realize that the problem is not just that so much public discourse is clueless; it's that it is delusional. It’s not simply that we don’t know; it’s that we make things up then act on false information.

Before we have a chance at coming up with a good answer about we should do about Aleppo, we need to make a commitment to getting the facts right. We certainly blew it after 9/11 and could argue that those mistakes have only worsened the crisis in Syria. If we want to honor the lives lost due to the 9/11 attacks, we should start by getting the story straight.

(Editor's note: An earlier version of this story incorrectly stated that Richard Grenell also implied that Aleppo is controlled by ISIS.)