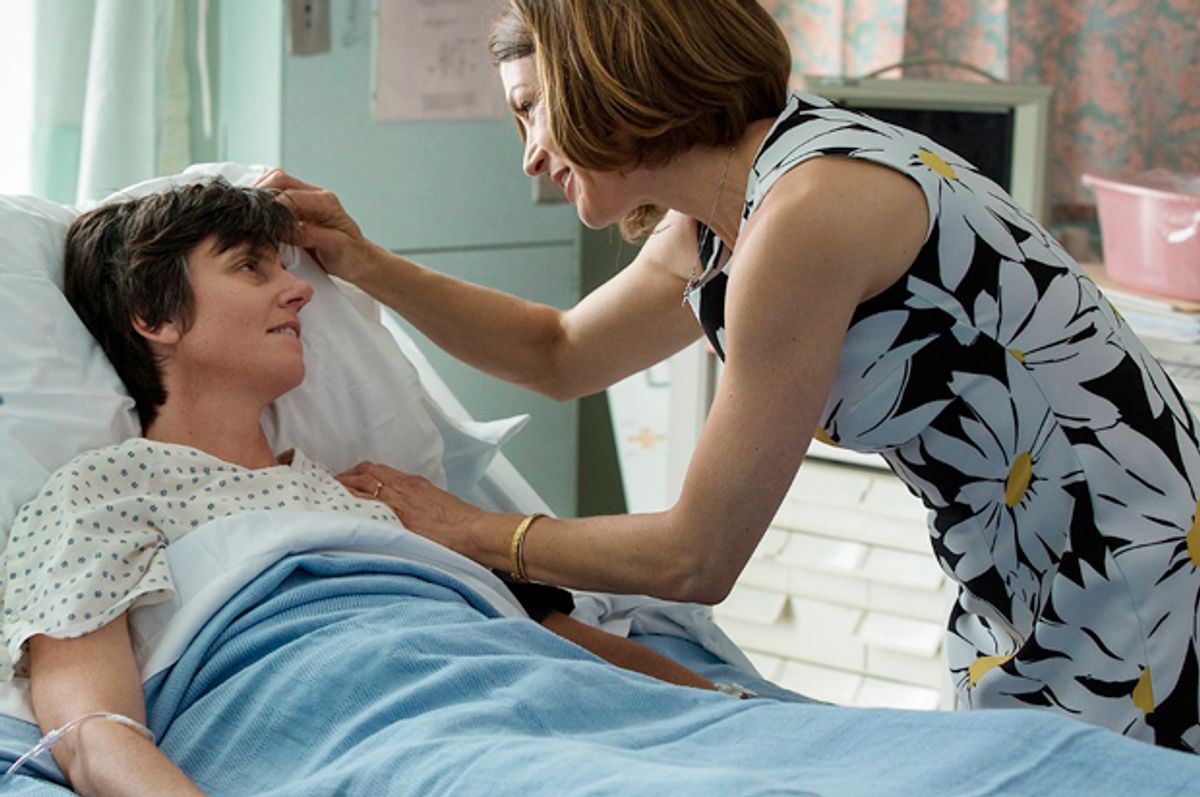 Tig Notaro and Rya Kihlstedt in "One Mississippi" (Amazon)
--

Hybridized genre titles such as “dramedy” or “tragicomedy” are often used by networks and producers out of sheer laziness. That’s understandable if you’re a creative who has made a decent, if not excellent, half-hour comedy series that is oddly devoid of laughter, or an hour-long drama heavy on the punchlines and physical humor. It’s not quite a comedy, and it’s not really a drama, so . . . “dramedy!”

Here’s the thing about “dramedies” or “tragicomedies” or any other genre chimera that can make a viewer feel stabby at hearing it: These terms are often abused as catch-alls to explain away a show’s triteness, masking why episodes don’t quite work. As such, when Amazon dubbed Tig Notaro’s “One Mississippi” a “traumedy,” efforts to refrain from rolling my eyeballs nearly caused me to pop a vessel.

But after watching the six-part first season of “One Mississippi,” which is currently streaming on Amazon Prime, it’s clear that Notaro has earned the right to the term. With “One Mississippi” and the upcoming “Fleabag” debuting on September 16, Amazon Prime is (perhaps inadvertently) establishing itself as the home of the heartbreaking half-hour.

These new shows also elucidate the value of concise storytelling and explain why shows clocking in at under 30 minutes are such hot commodities this season. Part of the trend has to do with lower production costs, but creatively speaking, a quality half-hour allows writers to engage in unorthodox storytelling through the paradigms of idiosyncratic personalities.

“Mississippi” and “Fleabag” are intentionally very funny, even as they steadily submerge the viewer into deeply uncomfortable emotional territory. Both Notaro’s Tig and the unnamed protagonist of “Fleabag,” played by Phoebe Waller-Bridge, are masters of the witty rejoinder, answering the gentle, strange and occasionally dull people around them with patience or sarcasm that lets the viewer in on the joke. Getting to know these characters can be incredibly entertaining but, like the pets each keeps at arm’s length in their respective shows, they’re best experienced in limited doses.

“One Mississippi” heavily harvests Notaro’s life story to spin a plot informed by loss, family dynamics and the secrets that can arrest a family’s psychological growth in amber. In real life, Notaro is a comedian who became famous for turning a trio of horrible events in her life into an unforgettable set at Los Angeles’s Largo in 2012. Within a short span of time, Notaro nearly died of a gastrointestinal infection from the bacterium C. difficile, experienced the sudden death of her mother and was diagnosed with cancer in both breasts.

Comedian Louis C.K. happened to be there on the night she riskily turned her nightmare into confessional genius and persuaded her to release it to the public. That C.K. executive produces “One Mississippi” is not at all surprising; the show’s low-key cinematic feel is one of his calling cards.

Yet “One Mississippi,” co-created with Diablo Cody, is without a doubt Notaro’s baby. The stand-up comic is an expert in finding the comedy in quiet discomfort, pausing during her sets long enough to leave the audience hanging on a delicate lace of anticipation before ripping it with a punchline.

That energy pervades “One Mississippi,” which shows Tig as an introverted radio host beloved in her small Mississippi hometown of Bayou Saint Lucille, brought back home when an accident leaves her mother on life support.

Even the outsized characters in Bayou Saint Lucille feel genuine, though a sizable portion of humor originates from Tig’s interactions with her tightly-wound stepfather Bill (John Rothman). Tig’s re-entry into Bill’s perfectly organized sphere causes predictable friction; the man’s life is so regimented that his bodily functions are on an internal timer, and he seems to care more about the well-being of his cat than the humans in his family.

But Tig’s brother Remy (Noah Harpster) alleviates that tension by maintaining a good nature, although his life has stagnated. Death has a way of unearthing family secrets, and as an assortment of messy truths surface from under the muck, Tig begins to question how well she knew her mother (portrayed in flashbacks by Rya Kihlstedt) at all.

Each of “One Mississippi’s” characters has scars, both external and internal. The real Notaro owned her post-bilateral mastectomy by famously performing part of a set topless. But the fictionalized Tig undresses with her back to the bathroom mirror and displays an aversion to intimacy, cringing at the affectionate overtures of the girlfriend she left back in Los Angeles (guest star Casey Wilson), even as she pins unrealistic hopes on shallow flirtations.

Tig has another reason for retreating into an emotional shell, explored in later episodes. Although the character revisits that pain, she doesn’t live in it, and she also comes to appreciate her own flaws and the frailty of the souls around her. Even the robotic Bill becomes lovably human in his demand of procedure and precision; control can be a potent bulwark against the unpredictability of despair.

“One Mississippi” also exemplifies the difference between employing tragedy to incite a story’s action and looking at the way trauma folds itself into life like chopped nuts into a foamy batter. That ingredient defies being ignored, and occasionally a rogue hard edge opens new wounds, awakening old ones with a dull throb.

Tig’s homeward journey is lighter than that of “Fleabag’s” hyper-sexual protagonist, who never tells us her name but fondly breaks the fourth wall to share asides that are often at odds with her interactions with other characters.

“Fleabag” began as Waller-Bridge’s one-woman play in the 2013 Edinburgh Festival Fringe, where it won an Olivier Award and a Stage award for the actress and was praised for its examination of feminism and modern sexual mores.

Expanded into a full series, the actress plays a single Briton barely keeping afloat her guinea-pig-themed café. When she’s not wasting her time behind the counter or running after the place’s furry mascot, she’s hooking up with an assortment of men she uses as convenient props, whether to date or to stroke her ego.

There’s nothing hot about this woman’s sexual escapades; one sequence gleans its hilarity from having her hot-and-cold boyfriend walk in on her pleasuring herself to President Obama giving a speech. (About what, she could not tell you.)

The fact that the viewer knows more about her family — her sister Claire (Sian Clifford) and drunk brother-in-law (Brett Gelman), her best friend Boo (Jenny Rainsford), her emotionally distant father (Bill Paterson) and her shrew of a stepmother (Olivia Colman) — than we do about her speaks volumes.

“Fleabags'” loose and free attitude toward sex is comical, to a point. Waller-Bridge makes the viewer complicit in her ribald adventures and wry, seen-it-all attitude as she moves through the streets of London like a confident shark, but even this is a costume that peels away to reveal the ruin underneath. That truth emerges bit by bit with each passing installment, and the cruel genius of the series is only revealed in the first season’s final moments.

This serves less as a moral commentary than a bleak view into what happens when our hunger for fulfillment leads us to devour the meager sustenance on another’s plate. And like “One Mississippi,” “Fleabag” ends in a place of truth, even hope, though all indicators point to both shows’ stabilized situations eventually, predictably falling apart.

Such is the nature of living with trauma, of course — which would be impossible to do if we didn’t search for the laughter inside of the pain.