The last 9/11 survivor: What my dog remembers about that day 15 years ago

The more time passes, the more connections we lose to 9/11. The author's deepest one, who has four legs, remains 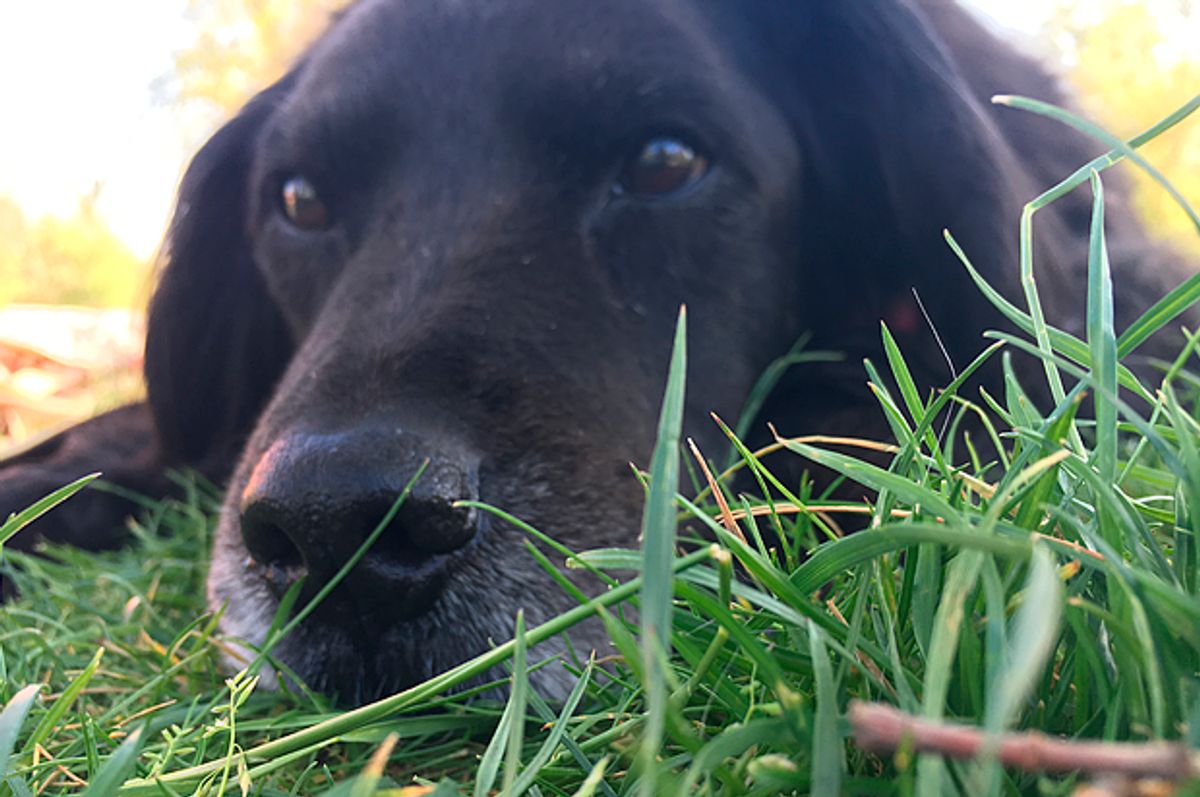 It seemed like he knew before the rest of us did. Around 8:45 that morning, he was pacing the living room, sticking his nose out the window, sniffing the air. Maybe he recognized that smell of dust, ash, burning metal and melting plastic. Maybe he heard the planes and recognized something different about them — too close. He’d already been out that morning, but he wanted to go again. He kept checking in with us; he paced and whined until we leashed him and took him downstairs and, after we did, he wanted to go a different direction than usual — not east to Central Park, not west to Riverside Drive, but south.

We didn’t get that far: His human caretakers had jobs, responsibilities and soon, when we heard what was happening from one of our neighbors down the block, an unbelievably horrific reality to grapple with. And even if we had made it all the way downtown, the police would have stopped us long before we got to the site. Still, as he rests beside me, I wonder how much he understood. And even now 15 years later, when he shivers at the sound of fire alarms, when his ears twitch at sirens, I wonder how much he remembers.

Let’s be clear: I don’t think his senses are more acute than those of any other dog. He’s not an unusual animal — perhaps a bit more strong-willed than most, perhaps a bit more tolerant of people and a bit less tolerant of other dogs. Perhaps his sense of separation anxiety is more extreme. But really, he’s just a 60-pound mutt — a mix of black Lab and chow, according to the East Harlem city shelter where we rescued him, a “Liverpool Mongrel” according to the British exchange student who met him on 106th Street while she was stranded in New York during that second week of September.

I’m sure just about every one of those dogs that he used to fight, play with or avoid sensed something different in the air on those days — not just the smell or the sounds, the conversations their owners would have on the sidewalk, in the park and in the dog run: about a friend who was still missing, about a neighbor who’d somehow made it down 102 flights of stairs in Tower 2. I’m sure they grasped some of the meaning behind the sensitive but probing questions that people sitting on park benches would ask as we walked by: “I haven’t seen your wife in a few days. Is she all right?”

Probably most dog owners who were in New York during 9/11 would tell a similar story of how their pets behaved, how their dogs seemed more attentive and alert. And if those animals could talk, who knows? Maybe they would say so, too: Prince, the proud yellow Lab who could be heard throughout the neighborhood barking for his tennis ball; Maddie, the sweet springer spaniel who never met a person she didn’t like; Lucy, the greyhound mix fond of opening up purses and eating lip balm; Jackson, who liked to wrestle on the Great Hill in Central Park; Buber and Fig, the best Frisbee-catching dogs I’ve ever seen; Train, the German shepherd who’d grab onto my dog’s collar and refuse to let it go until the two animals were pulled apart.

There are only a couple of differences between those dogs and this one — what they saw, what they remembered and the fact that he’s the only one still here: 80 years old, 87 or 112 and counting, depending on the online dog age calculator you use. In dog years, he was only 7 in 2001. Today he can’t walk anywhere near as far as he used to; his breathing becomes labored on the way to the park, especially when it’s hot outside. But still, he’s here.

In April he couldn’t make it around the block and fell when I tried to get him up the stairs. The throat surgery helped, but he’s still not spry. He likes to go for drives, but it’s tough to get him in the car. I don’t know if he can’t swim anymore or if he’s scared to, but when he gets to the water, he just steps around a bit, then stands and stares. He can see all right and his appetite’s still big, but there are fewer foods he tolerates. But he’s still here.

I don’t know what to attribute his survival to — good genes? The raw food diet? The fact that he seldom goes off-leash? Just plain luck?

He’s fragile now, but he’s a survivor. He has his chin on a paw and licks the air while I consider how many dogs were in New York on that day and are still here. Earlier this year, the last of the 9/11 search and rescue dogs died at the age of 16. This dog is in his 17th year now; maybe he’s one of the very last ones.

But then again, I suppose there’s nothing unusual about that. Every year, it seems, there’s a story of some last survivor remembering, some last survivor passing away. In 2011 Frank Buckles, the last American to fight in World War I, died at 110. “Longevity has never bothered me at all,” he once joked to a reporter in Knoxville, Tennessee. “I have studied longevity for years.”

On Feb. 28 of this year, Delmer Berg, the last surviving American volunteer in the Spanish Civil War, died at 101. “It bothers me a little that at 99 you’re going to die any minute because I have a lot of other things I want to do,” he told a New York Times Magazine interviewer in 2015.

Someday there will be more last survivors — of World War II, the Holocaust, Korea, Vietnam and, yes, 9/11.

I leash up the dog to take him down to the pond. It takes us a while to get there, and when we do, he stands there watching mayflies dart about on the surface of the water. Those mayflies rarely live longer than one day; in all likelihood, none of them will be here tomorrow. In Alley Pond Park in Queens, there is a tulip tree estimated to be older than the United States of America itself. It was there during the American Revolution and on the morning of the second Tuesday of September when American Airlines Flight 11 and United Flight 175 flew overhead.

My dog is still standing in the water, watching mayflies: Every one of us is the last witness of something.