The PATRIOT Act's ugly legacy: The US normalized xenophobia after 9/11, and planted the seeds for Trump's rise

After 9/11, the George W. Bush administration decided I was dangerous, based on nothing more than where I was born 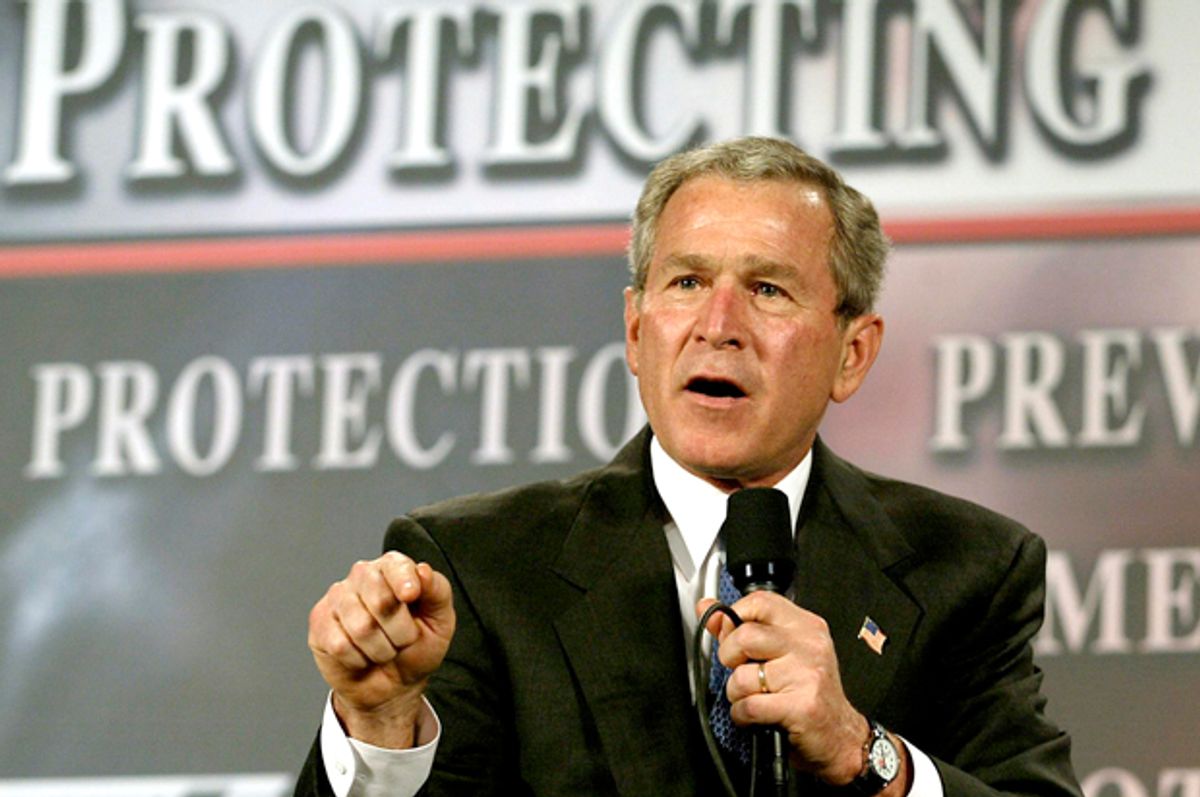 On the morning of September 11, 2001, I was asleep. Never being one for early rising unless I had to, I would be asleep for at least another two hours if my mother hadn’t called to tell me to turn on the TV. Minutes after her call, my phone rang again, this time a friend bringing me news of the event. My television was on, and by then, both towers of the World Trade Center had been hit.

Confused, stunned, speechless news anchors in New York City, wide-eyed with shock, were trying to sputter together coherent sentences that would sum up what they had seen happen live on their studio monitors. The country watched in real-time as the murder of nearly 3,000 Americans was carried out, in broad daylight, by a group of men with box cutters and pilot’s licenses from flight schools in Florida. As the day went on, speculation had already begun in the media that the United States was under terrorist attack. The last event of such proportions had happened six decades earlier, on December 7, 1941, when Japan bombed Pearl Harbor and pushed America into entering World War II.

In the aftermath of Pearl Harbor, President Franklin D. Roosevelt issued Executive Order Number 9066, part of which stated: “By virtue of the authority vested in me as President of the United States, and Commander in Chief of the Army and Navy, I hereby authorize and direct the Secretary of War, and the Military Commanders whom he may from time to time designate, whenever he or any designated Commander deems such action necessary or desirable, to prescribe military areas in such places and of such extent as he or the appropriate Military Commander may determine, from which any or all persons may be excluded, and with respect to which, the right of any person to enter, remain in, or leave shall be subject to whatever restrictions the Secretary of War or the appropriate Military Commander may impose in his discretion.”

With the attack on Pearl Harbor fueling longstanding racism against Japanese and Japanese-American residents in the West Coast, eventually between 110,000 and 120,000 people of Japanese ancestry, including U.S. born citizens, were relocated to internment camps along the Pacific coast. About 62 percent of those interned were U.S. citizens. While it was not written into 9066 that only persons of Japanese ancestry were to be targeted, the Secretary of War and the Military Commanders interpreted the order’s implicit sense of urgency as a call for the most extreme measures, and acted accordingly, in violation of the Constitution.

On October 26, 2001, George W. Bush signed into law the USA PATRIOT Act, which was short for “Uniting and Strengthening America by Providing Appropriate Tools Required to Intercept and Obstruct Terrorism.” In Bush’s words, the law was intended to “enhance the penalties that will fall on terrorists or anyone who helps them.” From the start, the PATRIOT Act faced its share of legal challenges. There were fears among many in legal communities around the country that it violated civil liberties and rights.

The PATRIOT Act personally affected me twice: first, when I saw a list of countries around the world that were put on a terror watch list and a second time when I received a letter to appear in person to be fingerprinted.

Among the countries on the Department of Homeland Security’s list was Bangladesh. And the list was more than just a seemingly innocuous catalog of nations: They were states where the majority of the population was Muslim, and citizens of those states who were in the United States and were not American citizens were being summoned to present themselves to be fingerprinted and entered into a database. I was still a citizen of Bangladesh at the time, and there was Bangladesh, alphabetically near the top of the watch list. As a citizen of a country billed by the DHS as a potential breeding ground of terrorists, because over 90 percent of Bangladeshis are Muslim, if I failed, or refused, to submit to the fingerprinting, it would suggest guilt or, at the very least, the existence of some nefarious secret I was trying to keep covered.

One of the first stories I covered for the paper where I was working at the time was an evening of readings of poetry, drama and various other spoken word performances bringing awareness to the growing targeting of Arab, Middle Eastern and Muslim men. The PATRIOT Act was being enforced. The rule of law was being executed. Just as it had been served when I, along with thousands of others across the United States, submitted to racial profiling.

In the U.S., brown-skinned men, men of Arab, Middle Eastern and South Asian descent, became the very image of the enemy. Despite the Saudi royal family’s decades-long close relationship with U.S. presidents and intelligence agencies, the name of Osama Bin Laden, one of the royal family’s many scions, meant nothing to the general American populace. Within weeks of the attacks, Osama Bin Laden became a household name across America. And after the attacks, Bin Laden’s position in U.S. foreign policy tactics in the Middle East went from key ally to Public Enemy Number One.

Four days after 9/11, a former airplane mechanic, who once worked for Boeing, murdered a man in Arizona. The victim was a Sikh man whose beard and turban meant to his killer that he was a terrorist, and the killer in his patriotic rage sought revenge.

The PATRIOT Act, like 9066, never specified whom to target, but the FBI, CIA, NSA and other local, state and federal authorities chose to go with their own interpretations, which echoed those of FDR’s Secretary of War and Military Commanders.

Following the debacle of the 2000 election and the Florida re-count fiasco that haunted it, I was attuned to the unfolding drama, but knew nothing about the former Texas governor and eventual “winner” to get excited about either way. Little did I know in 2000 that, in the light of Bush’s later perjury and illegal invasion of Iraq, getting sober, in my opinion, would remain his most commendable and noble achievement. The man I came to know as president, and whose history I slowly learned, was a spectacular failure in life, and eight years of his presidency left the country broken, the tremors of which are being felt to this day.

Bush declared his “war on terror,” calling it a crusade against the forces of evil. A Christian leader using the word "crusade" to declare war on a Muslim state had historical implications that were seemingly not on Bush’s radar. He then directed this declaration of war on Iraq, which had nothing to do with the 9/11 attacks, and marshaled the powers of his office, and that of the U.S. intelligence community, to craft one of the biggest fabrications of the early 21st century, selling it wholesale to the American public, with no little amount of help from the mainstream media: Saddam Hussein had weapons of mass destruction. For that reason Iraq had to be bombed, and Hussein, yet another product of U.S. foreign policy in the region, had to be removed from power.

America is now in the post-9/11 era. That has different meanings for different people, different groups. In one way or another, everyone is affected. 9/11 re-defined America; it revitalized old cycles.

A little over a year ago, the blustering, bombastic re-appearance on the national political scene of a narcissist real-estate billionaire had me, along with much of the rest of the country, laughing. The same man that had launched the so-called “birther” narrative, challenging President Obama’s American citizenship and thereby his qualification to be commander-in-chief, had, while stoking the latent racially-motivated angst of those that eventually became his “base,” declared his intent to run for the White House. And still, I, and vast numbers of Americans, kept laughing.

When Donald Trump’s verbal attacks on immigrants, Muslims and others began, they were thought to be the death-knell of his short-lived display of megalomania, his disgraceful exit, right there on national TV for the country to wave goodbye to with boos and cheers. When it didn’t happen — after he had declared Mexicans and Mexican-Americans “rapists,” slammed John McCain’s service record and POW years, ridiculed a reporter with a disability and, in November 2015, issued a statement placing a ban on all Muslim immigration and travel to the United States — the laughter stopped. Mine went out faster than a candle-flame in a hurricane.

Trump reached into a dark side of the American psyche that had been dormant. The droves of Americans that responded to his rhetoric led him all the way to the Republican nomination. And they responded to Trump the way they did not because they suddenly thought they found a “savior” — maybe so, but not entirely — but because they’re the other, extreme arm of the divide America had turned into as a result of 9/11, specifically on the shoulders of the “you are with us, or you are with the terrorists” decree George W. Bush directed at other countries.

Trump’s rise, and the revitalized xenophobia, racism and nationalist hysteria that has been nurtured by it, goes back much further than a year and a few months. The GOP has been setting this stage for him since at least 1980. The post-9/11 resurgence of xenophobic nationalism in the form of Islamophobia and anti-immigrant hostility has been the GOP nominee's real trump card, whether he has the ability to see it or not. Fifteen years may have passed, but in many ways that decade and half was prologue to where we are now.

The insidious and demoralizing narrative unleashed by the powers that be in the aftermath of 9/11 set the stage for Donald Trump. Law-abiding people are supposed to jump to clear their names and denounce the actions of murderers just because they share with them a faith or a nationality. That is not proving devotion to America. It is allowing ignorance to determine an image I have to fit and redo every time the cycle of xenophobia and racism recur.

Dissent, instead of being lauded as a touchstone of patriotism, is being raged at as treason. The suffocating mess of toxicity that has been the 2016 election year has re-appropriated the “with us or with them” brand of patriotism cultivated by George Bush. Instead of being deeply worried about a growing militaristic image, masses of Americans are lauding, unconditionally, whatever martial stance the country is taking. And the dissenters are being demonized, while hate crimes against Muslims are on a new rise. It feels as though fifteen days haven’t passed, let alone fifteen years.

What the PATRIOT Act left undone might easily be reinstated by a new name, called the rule of law, and enforced, this time far more militantly than before. Whether it’s given the full scope of Executive Order 9066 is a matter of deep conjecture . . . not one to laugh or scoff away.

As for images, here is one I’m happy to spread around: resister, critic, dissenter.

I wasn’t guilty back then, and if required again to give my fingerprints in violation of my Constitutional and civil rights, I will refuse.