In the show's third season, flu strikes Pawnee, but Leslie — of course — doesn't let sickness stop her on the job 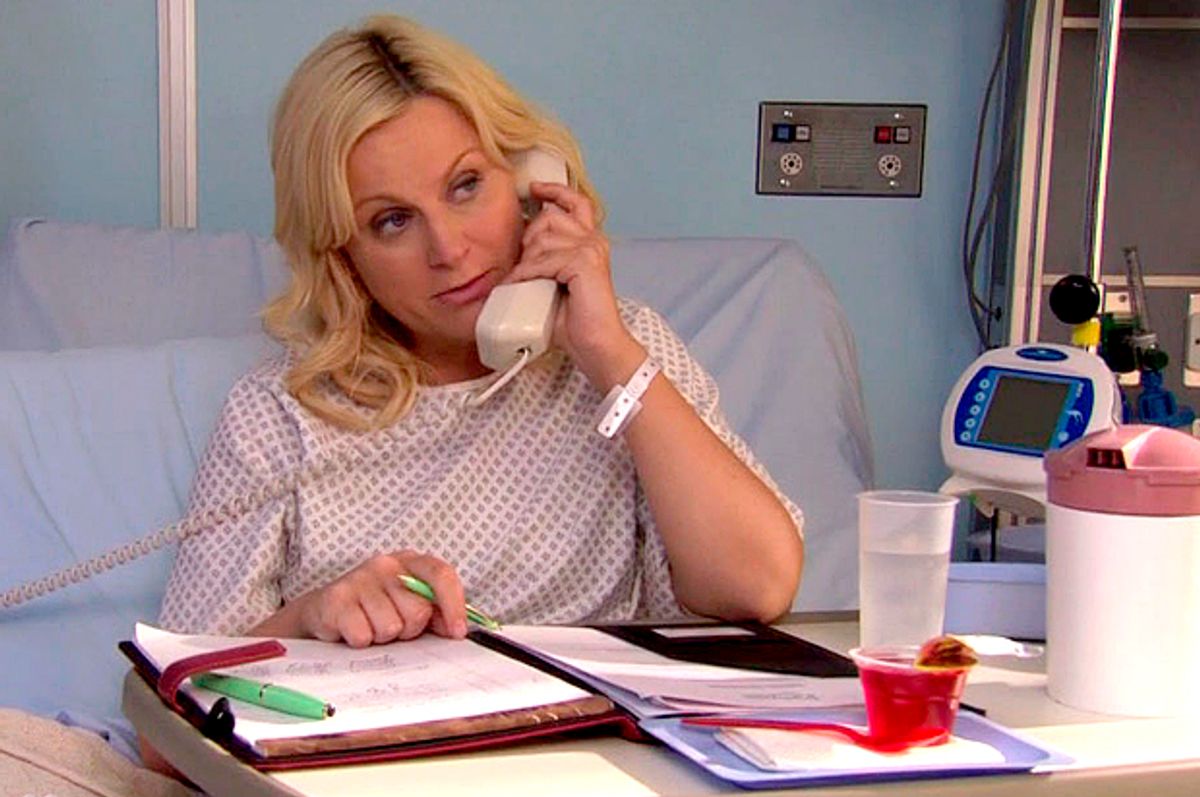 Hillary Clinton’s health is the non-scandal that will never die. Throughout the course of her presidential campaign, the Democratic nominee has been rumored to have a heart condition, Parkinson’s, HIV, asthma, lupus and multiple sclerosis and is allegedly prone to fits of seizures. The fact that Clinton happened to have come down with pneumonia, a highly treatable illness, would then seem to be the least of her problems.

The former secretary of state appeared at a Sept. 11 memorial on Sunday, despite her condition. Clinton, feeling overheated, left the service early, stumbling as her team of Secret Service agents and staffers helped her walk to her van. A momentary glimpse of the 68-year-old, who would be the second-oldest president in U.S. history, has fanned the flames of fears that she might not be, as CNN’s Stephen Collinson wrote, “fit for the considerable physical demands of the presidency.”

“Her campaign is also confronting new questions over transparency after it kept details of her condition quiet for two days,” Collinson said.

John Dickerson, an analyst for CBS News, claimed that it was another indication the candidate has a problem with honesty. “I think it’s problematic,” Dickerson said.

“There will be a lot of questions about ‘Let’s see her full medical records,’” he added.

The incident, however, is far from an indication that Clinton is untrustworthy and someone who would lie to the American public about everything, including her own health. Instead the so-called flap is remarkably reminiscent of the determination of Leslie Knope, the fictional small-town version of Hillary Clinton portrayed by Amy Poehler on NBC’s “Parks and Recreation.” Like Clinton, Leslie understands that she doesn’t get a day off, especially when there’s work to be done.

That’s not a portrait of tainted governance. This is what leadership looks like.

“Parks and Recreation” spent six years prepping audiences for a Hillary Clinton presidency. The NBC show follows Leslie Knope, a fictional employee of the parks department in Pawnee, Indiana. When the show debuted in 2009, Leslie was portrayed as driven and idealistic, believing that government can work for the common good. Early episodes also showed her to be aloof and a bit buffoonish. “Parks and Rec” was created by Mike Schur, who served as the co-executive producer of “The Office,” and it showed. Leslie 1.0 was designed in the Michael Scott template, someone who wants to be liked but alienates those around her.

When Ann Perkins (Rashida Jones) meets Leslie for the first time during the show’s pilot, she describes her future best friend as “doofy but sweet.” This point is underlined in the following episode when Leslie proposes that the department canvass to garner support for a planned project — filling in a pit to build a community park. Her co-worker, Mark (Paul Schneider), warns that it’s “too soon” to do so.

The initiative bombs. A Pawnee resident whom Leslie meets complains that a park near her house would be noisy. Leslie responds, “Would it change your mind if 9 out of 10 meth users said the exact same thing?” That same woman shows up to the forum and eviscerates the proposal, lambasting the fact that the parks department has pushed the initiative forward “without a single environmental impact study.” “Let’s take a stand,” she says to applause. The takeaway is that because Leslie didn’t listen, her can-do spirit goes only so far.

When the show’s second season debuted, “Parks and Rec” retooled the character, who critics considered one of the weakest parts of the show. Schur and his writers wisely let Leslie be good at her job, even when it meant fighting bureaucratic hurdles or butting heads with her boss, the libertarian Ron Swanson (Nick Offerman). If Leslie works passionately to make the public sector better, Ron wants to tear it apart.

Throughout the show, Leslie’s ambition is portrayed as one of her strongest suits, a quality that makes her willing to go the extra mile for those around her. It makes her a good friend and a great leader, the kind of person who will stay up all night to meticulously color-code the office binders. Her inability to let go sometimes leads to trouble: When a maintenance worker discovers that Leslie has been dating one of her co-workers, Ben (Adam Scott), she gives him a gift certificate in exchange for his discretion. As an ethics committee later scolds, this technically constitutes bribery.

Television often has a way of apologizing for women’s ambitions, couching female drive in a disclaimer. Fox’s “24” is the rare program that allowed a female president, Allison Taylor (Cherry Jones), to get elected to office. On “Veep” and the short-lived “Commander in Chief,” Selina Meyer (Julia Louis-Dreyfus) and Mackenzie Allen (Geena Davis) play vice presidents who ascend to the Oval Office after the chair becomes vacant. (One president dies; the other resigns.)

What so special about “Parks and Rec” is that it portrays Leslie’s imperfect ambition to do good without apology — and allows her to succeed. The finest indication of that theme is the Season 3 episode “Flu Season,” one with striking parallels to Clinton’s current political predicament.

“Parks and Rec” revels in showing its characters battling sickness — whether it’s viral or a result of bad decisions. In “The Fight,” Tom Haverford (Aziz Ansari) throws a party for Snakehole Lounge, the club he co-owns, and the parks department workers get wasted on Snake Juice. “Flu Season,” however, finds the park department battling influenza, after both Leslie, April Ludgate (Aubrey Plaza) and indestructible million-dollar man Chris Traeger (Rob Lowe) get sick. Leslie, true to form, insists on going to work anyway. She even locks herself in her office to avoid being sent home by her bosses.

That’s not just Leslie being a workaholic. The department has to prepare for a pitch meeting to local businesses, in order to entice them to sponsor the upcoming Harvest Festival. Ben says that he can handle it, but Leslie knows that if she’s not the one giving the speech, the event won’t happen. “I have to get ready for the Chamber of Secrets,” she says, adding, “If this meeting does not go perfectly, then the Harvest Festival is going to be over before it began.”

Unlike the previous edition of the character, Leslie 2.0 knows what she’s doing. After she’s forced to go to the hospital, she escapes and goes to the meeting against the wishes of her co-workers. Leslie looks the part — dressed in a brown, Clinton-esque pantsuit — but she’s also running an extremely high fever and experiencing hallucinations. She claims that the floor and the ceiling have changed places. But as Leslie explains, she didn’t show up because she doesn’t trust Ben to do a good job. “The Harvest Festival is my project,” she says. “It’s my career on the line, and I need to make sure that I’ve done everything I can do make it work.”

The meeting is a stark contrast to the botched town hall in Season 1. During that event, a stumbling Leslie asks Mark to take over in order to bail her out. “Mark Brendanawicz knows the answer to every question,” she says. “He’s amazing, and congratulations for hearing him speak.”

This time, however, it’s Leslie who saves the day. Seemingly against all odds, she nails the presentation, and Ben is shocked. “That was amazing,” he tells the camera, befitting the fourth-wall breaking, mockumentary-style format that Schur patented on “The Office.” “That was a flu-ridden Michael Jordan at the '97 NBA finals. That was Kirk Gibson hobbling up to the plate off of Dennis Eckersley.” Ben realizes, though, that he shouldn’t have been surprised. “That was Leslie Knope,” he adds.

The most important part of Clinton’s stumble on Sunday isn’t her woozy exeunt from the memorial. It’s how quickly she bounced back. After taking refuge at her daughter’s apartment to recover, Clinton was seen smiling and waving for the press — right back to doing her job. “I’m feeling great,” she told reporters.

On one hand, the image of Clinton soldiering on is an indication of the enormous pressure that the candidate is under to appear infallible and camera ready, so much so that she’s not even allowed to get sick without it becoming a major scandal. On the other, it’s a reminder what a dogged presence she can be more than a decade after the 9/11 attacks showed a more vulnerable side of Clinton than we’re used to seeing. In the years following the tragedy, the junior senator would become a “tireless advocate for first responders,” at WNYC reported, incensed that the Bush administration knew that an attack was possible and did nothing.

The Clinton that emerges from these dual portraits — whether in sickness or in mourning — isn’t a profile of a liar and career deceiver who is so crooked that she won't even tell us when she's ill. They speak to the character of someone with courage and tenacity, who refuses to give up no matter what.

In its six-year run, “Parks and Recreation” allowed a female politician to be good at what she does, even when it ails her. It seems we have yet to do the same.