“We wanted to bring awareness of the pipeline. It grew and grew, and more people would join," said one activist 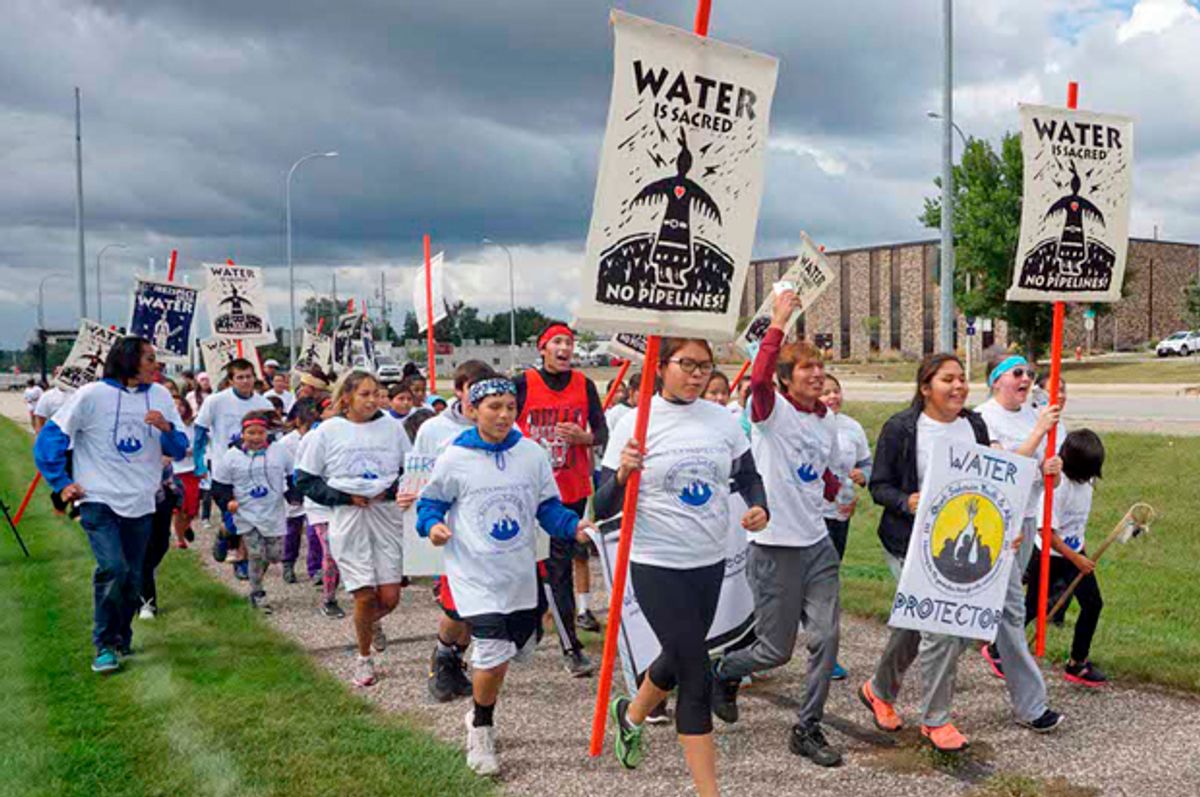 "We run —  for our sisters. We run — for our brothers. We run — for our water. One Nation!” Bobbi Jean Three Legs yelled as she ran on Friday, repeating the military-style call-and-response that motivated her fellow Oceti Sakowin Youth Runners during their Run for Peace near Bismarck, North Dakota.

Three Legs, 24,  is one of the creators of a series of protest runs opposing the Dakota Access Pipeline close to her home on the Standing Rock Sioux reservation near Cannon Ball, North Dakota.  The chant was echoed for miles by a group of young Native Americans and others who have joined them from around the world in support.

Three Legs — a founder of the Native advocacy group ReZpect Our Waters — has lately been a powerful voice on behalf of her people, who have been fighting since early April to prevent further development of the Dakota Access Pipeline under their water source, the Missouri River.  She, along with other young people she has connected with, has revived a traditional Native American relay-running style called the “crow hop” as a way of getting their message across.  In a crow hop run, a series of messengers cover two-thirds of a mile to a mile on foot and then trade off with another runner, who in turn runs the same short distance.  Resting runners were once carried on horseback, but the Oceti Sakowin protestors have the modern convenience of vehicles to transport those in an “off” part of the relay. In so doing, the runners are able to cover hundreds of miles a day.

Historically, the fastest men in a tribe were made messengers, and used to convey important news in Indian Country.

A victory in the Standing Rock Sioux’s very visible fight was delivered on Friday by the Obama Administration, which intervened on the tribe’s behalf to temporarily halt laying pipe under the river.  And Three Legs and her group were a big part of spreading the word on foot (called the “moccasin telegraph” by many Native people) and social media about the challenges to her people’s water supply. She learned about the crow hop from tribal elders, long a resource for passing down stories and information.

“We got an idea from the elders to make our bodies uncomfortable…to deliver an important message," Three Legs said. “The craziest thing about it was that when the youth came on the run, they really didn’t know that they were gonna do the whole trip. Some of them ended up running the whole time with us.”

Since the spring, the ReZpect Our Water group has run several relays, the first a short distance of 11 miles as a trial through the Wakpala, South Dakota community. “We were going to different communities in Standing Rock and getting people to be aware of what we are facing, and that water is where we live and get everything from…so we did a baby relay run,” she said. “The next run was 500 miles and had 14 coordinators. It was good to find out that before we were split up onto reservations, we were all one people.”

After a disappointing scheduled meeting in Omaha with Army Corps of Engineers leader Colonel John W. Henderson, to which he did not show, ReZpect Our Water quickly planned a nearly 2,000-mile relay run from their home in North Dakota to Washington, D.C.  The Oceti Sakowin Youth Relay Runners departed Standing Rock on July 15, carrying a petition with 140,000 signatures against the pipeline.

The run was long and grueling, but a testament to the history of Native peoples’ spiritual practice of running, especially when delivering important messages. It helped them connect with the natural world, and improve their lives. In modern times, running clubs and programs are a mainstay in some Native American schools because the discipline of running has been effective in building self-esteem and cultural pride, while stemming the attrition rate of high school drop outs, teen pregnancies, and drug and alcohol abuse.  One such program, Wings of America, is well known in Native communities.

Shaun Martin, Chinle High School Athletics Director in Chinle, Arizona and a former Wings coach – who is an accomplished ultra runner – explained the role of running in Navajo culture, for one.

“Running is a huge part of life and our beliefs: with most of Native America and indigenous tribes, it’s tied to culture in some shape or form. Our young brothers and sisters are still utilizing that belief system,” said Martin by phone from his office. “Congruently, they are modeling the circular system, where everything comes back around.” He pauses. “It’s amazing that they are using running...We are going back to our traditional ways and beliefs, but we are doing it with modern conveniences like social media…still, the act of running remains the same.”

Navajo people always run to the east, just before the sun rises; traditionally, they get up before dawn to meet and honor the ancestors and other holy beings from the spirit world. “We run east to meet these holy people, and as we are running, we are celebrating life, we are celebrating all the blessings we are given, we celebrate the negatives/hardships we have learned from. We celebrate the obstacles,” explained Martin. Like he and his fellow Navajo, the Oceti Sakowin Youth Runners also ran east – conveying their message of peace and environmental import through towns, villages, and cities. On Aug. 7, they ran through Union Square in New York City, where passers-by joined them at a loping pace and echoed their chants of “Mni Wiconi!” (Water is Life!)

“Even though we didn’t have thousands behind us, we wanted to do it anyway,” said  Three Legs. “We wanted to bring awareness of the pipeline. It grew and grew, and more people would join. When we would go through the communities, we would see youth and kids and elders, and it was cool because they would see us running and come out and support it.”

Watch the video below about the event and the petition, courtesy of RezPect Our Water.