That sinking feeling: Why the bankruptcy of shipping giant Hanjin has so many companies worried

When South Korea's Hanjin Shipping went down, it showed that the whole global transport industry could be in touble 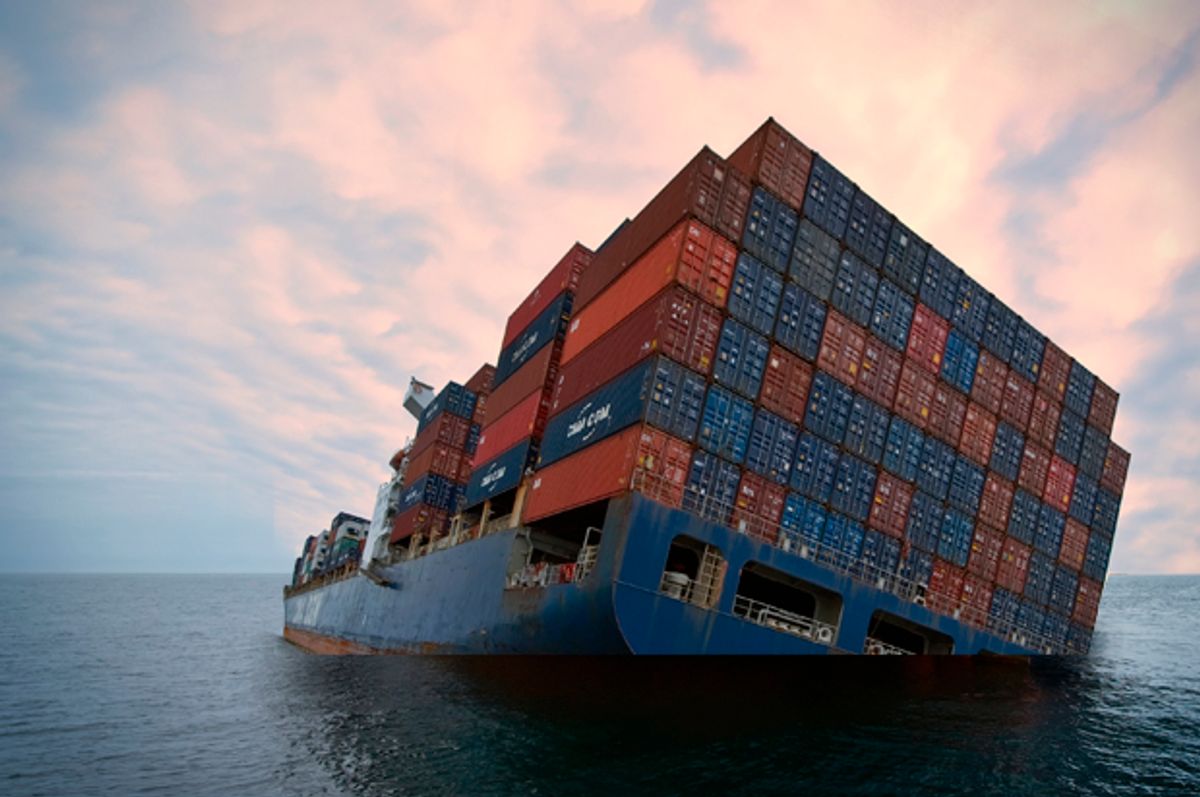 As South Korea’s Hanjin Shipping Co. sank into bankruptcy, the global transport industry has been thrown into disarray. The immediate effects have rankled U.S. retailers, which are waiting for their holiday season merchandise, as well as the many exporters anticipating higher shipping fees. The problem that torpedoed Hanjin, the world’s seventh-largest container shipper, and that imperils the rest of the industry is that it was too bullish and built too fast. Now it's at the mercy of a supply and demand imbalance — too many ships, not enough cargo.

Currently, more than 80 massive Hanjin container ships are in limbo — either en route or anchored near their destinations, unable to offload their cargo because terminal operators fear Hanjin won’t be able to pay them. As a result, $14 billion worth of goods are languishing in a maritime limbo. At least eight Hanjin ships have been seized as of Friday. Four vessels parked off Long Beach, California, have been prevented from entering or leaving the port, including one that was taken by U.S. marshals after a fuel supplier filed suit against the freight company.

Meanwhile Hanjin isn't going down without a fight. It's negotiating with its creditors to try to prevent more of its ships from being seized in asset forfeiture while simultaneously trying to allay terminal operators' concerns about being paid — and the rest of the industry is watching closely.

“The Hanjin bankruptcy is a mega-event for the maritime industry, for all interests, not just for the cargo its ships are carrying, but also for terminal operators and longshoremen,” James Mercante, head of admiralty, transportation and maritime insurance practice at Rubin, Fiorella and Freidman, a New York-based insurance law firm, told Salon. “You’re going to see hundreds and hundreds of insurance claims and litigation surrounding this going on for well more than a year.”

Hanjin accounts for about 3 percent of shipping containers globally. It's big enough that U.S. retailers are worried that delays will shorten the busy holiday shopping season as they wait for goods to arrive. And U.S. exporters now anticipate a 50 percent hike in shipping fees, according to Peter Friedmann, executive director of the U.S. Agricultural Transportation Coalition.

“When a large carrier suddenly ceases operations and removes approximately 20,000 to 25,000 containers per week of capacity from the global supply, there is a sudden shortage of supply,” Friedmann told Salon via email.

The Hanjin bankruptcy is just the first major disruption for an industry that is in trouble and expected to lose at least $6 billion this year. Maersk Line, the world’s biggest shipping company, lost $114 million in income in the first six months of the year; this contrasts with its having a profit of $1.22 billion in the same period of last year. Revenue fell 20 percent, to $10 billion. Most of Maersk’s rivals have reported double-digit declines in revenue this year.

The seeds of this crisis were sown a decade ago, when shipping companies went on a buying spree, ordering bigger fuel-efficient ships as oil prices were climbing. Ship builders, port operators and container lines were all eager to receive the bounty of China’s ravenous demand for everything from iron ore to designer handbags. Today, the global economy is sluggish, and the slowdown in China coupled with recessions in Brazil and Russia are pushing global growth down.

This could result in further consolidation, like Matson’s $469 million acquisition of Horizon Lines last year. With the industry-wide decline expected to continue through next year, there’s a real possibility of further disruptions as other freight lines file for bankruptcy. Global freight rates dropped nearly 10 percent last year, according to Drewry Shipping Consultants. Meanwhile, a Moody’s analysis published over the summer estimates that global container-shipping capacity increased 8.6 percent.

In the short run, the disruption in the flow of goods caused by Hanjin's bankruptcy should work themselves out soon, according to Ben Hackett, founder of maritime industry consultant Hackett Associates.

“I don’t think the cargo traffic disruption will last very long,” Hackett told Salon. “Hyundai [Merchant Marine] is already picking up a lot of the outbound cargo that’s ready to ship from Korea. I think most of Hanjin ships that are out at sea will dock by the end of the month.”

The question is: What then?

Suddenly, a slew of companies that have taken the shipping industry for granted are watching with concern. According to industry analysts, the only way to fix the oversupply of ships is with an unprecedented culling of the fleet that would scrap older vessels. But that could take years.