The Clinton BS Files: Hillary probably does not kill cats to intimidate her husband's enemies

Kathleen Willey accused the Clintons of covering up a sexual assault . . . and of stalking, murder, and cat-icide 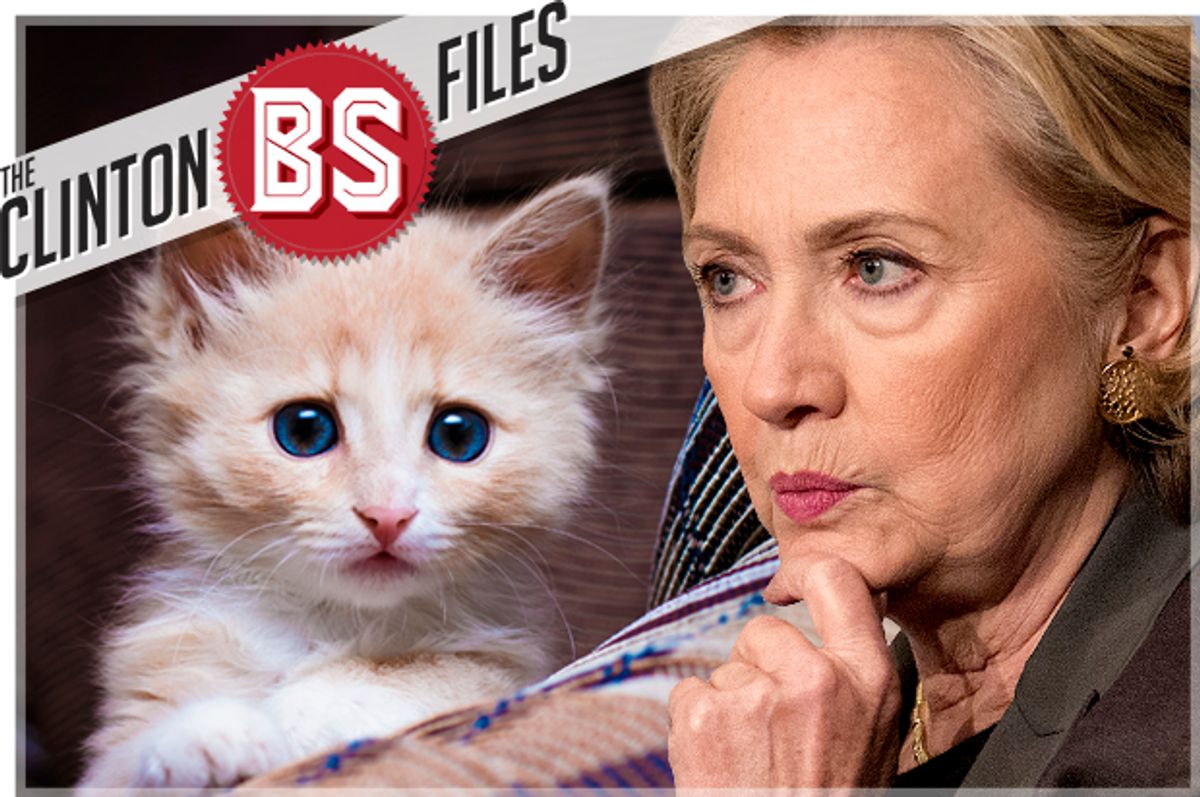 One of the favorite "gotcha" gambits that conservatives have been running about feminists during this election season is throwing up a bunch of conspiracy theories about Bill Clinton's being a sexual predator and saying feminists are required to accept this because we're supposed to "believe women."

In the real world, of course, what feminists mean by "believe women" is that reports of sexual abuse should be treated with the same seriousness that we treat reports of any other crime: We trust the reporter and investigate, instead of blowing off rape accusations on the assumption that women are born liars, as happens in police departments every day.

But being trusting doesn't mean that you are required to believe women in the face of overwhelming evidence that they are lying, any more than we are expected to keep believing in someone who falsely reported a car being stolen. Most feminists accept, for instance, that the women in the Duke lacrosse case or Jackie from Rolling Stone's infamous University of Virginia story fabricated their experiences.

This critical distinction matters quite a bit in the case of Kathleen Willey, one of the right's favorite accusers to drag out in an effort to shame feminists for supporting Hillary Clinton. With the assistance of Roger Stone, a dirty tricks expert who has been working tirelessly on behalf of the Donald Trump campaign, Willey has been out there, pushing her long-standing allegations that Bill Clinton sexually assaulted her when she was a White House aide in 1993.

The campaign has had mild success. Willey's allegations about being groped have been reported in the Daily Beast, Slate and Jezebel after the Trump campaign spent a week pushing this narrative. What was missing — likely cut for space not out of any maliciousness — was the context of Willey's accusations.

Willey hasn't just accused Bill Clinton of groping her against her will. Willey has also launched a cornucopia of accusations about both Clintons — that they've stalked her, stolen from her, vandalized her things, sent "thugs" to intimidate her and even that they murdered her husband and framed it as a suicide.

Oh yeah, and Willey also floats the theory that the Clintons have it out for her pets.

In her book "Target: Caught in the Crosshairs of Bill and Hillary Clinton" — published by WND Books, a subsidiary of the right-wing conspiracy theory site WorldNetDaily — Willey suggests that the Clintons hired people to run an intimidation campaign against her during the Starr investigation, in which she was asked to testify about her claims that Bill Clinton groped her. Willey goes on to claim the man asked about her tires, which had been vandalized some months back, and about the well-being of her children. She continues as follows: Two days after her deposition, Willey writes, she found a small animal skull on her porch, which she assumed was her dead cat.

"Investigators recovered a small animal skull in Willey's yard and sent the evidence to the FBI labs for analysis," Newsweek reported in 1998. "Tests showed it belonged to a raccoon."

But Willey tries to sow suspicion about these results:

She then recounts the death of another cat, named Blarney, whom she found dead on her porch:

So not only are the Clintons cat-killers, but they have secret poisons that are undetectable in an autopsy.

While on her 2007 book tour, Willey went on Fox News' "Hannity & Colmes" to reiterate her claims that the Clintons killed her cat. Alan Colmes confronted her, pointing out that the skull was a raccoon skull. She reiterated her claim that it "was put there by somebody." At that point, Colmes kept pressing:

Colmes: Do you have any evidence of anybody purposely putting it there and who that might have been?
Willey: Did I see anybody do it? No. But — I did not see anybody do that.
Colmes: You think the Clintons would be involved?
Willey: Yes, I think Bill and Hillary Clinton.
Colmes: They themselves, a president of United States would be involved in putting an animal on your porch?
Willey: I think Hillary — I know that Hillary and Bill Clinton participated in hiring people like Jack Palladino, like Terry Lenzner, like Palladino out in California to intimidate me, Juanita Broaddrick, Paula Jones, Gennifer Flowers, and others that I can't name.

Sean Hannity swooped in to rescue her, but at this point, the obvious credibility issues had been raised.

Colmes also confronted Willey about another bizarre story. In 1998, Time reported that sources, including Willey's friend Julie Steele, had recounted a story about Willey's lying to a boyfriend, Shaun Docking, about a pregnancy.

"She wanted to get back at him for Fourth of July plans gone awry, Steele told the FBI," Time reported. "The plot grew more serpentine. Shortly after her announcement, Willey told Docking, who at 30 was 18 years her junior, that she would have an abortion. Then, on the morning of the 'scheduled' procedure, she informed him she had changed her mind. Not long after, Willey had Steele call Docking and tell him she had suffered a miscarriage."

In 1999,  the Nation reported that investigators had confronted Willey with this story, and she denied it. The investigators then interviewed Docking, after which they confronted her again. The second time, she admitted she had lied.

"Following that first immunity agreement, Willey gave false information to the FBI about her sexual relationship with a former boyfriend, and acknowledged having lied about it when the agents confronted her with contradictory evidence," independent counsel Robert Ray concluded in a 2002 report.

In May Trump accused Hillary Clinton of being her husband's "enabler" who "would go after these women and destroy their lives." He was being purposefully vague, but his right-wing audience caught the reference. He was winking at Willey's accusations that the Clintons stalked her, killed her husband and killed her cats.

It's always possible, of course, that Willey is telling the truth about Bill Clinton's having groped her. But the pileup of fantastical details and her history of manipulative lying fits what we know about false sexual-assault reporters, who often eschew the typical rape narrative in favor of outlandish stories that garner the most sympathy.

And Willey has a sympathetic audience with the paranoid right, which now controls the Republican Party through Trump. These are folks that will believe any story, no matter how preposterous, about the Clintons — that they're murders and gangsters who have evaded detection while running an international crime syndicate, even though they have been subjected to more government and media scrutiny than anyone else in politics today. If you believe that, then believing that they're cat killers is just another thing to throw onto the bullshit pile.