An open letter to the Commission on Presidential Debates: Bring on instant replay! 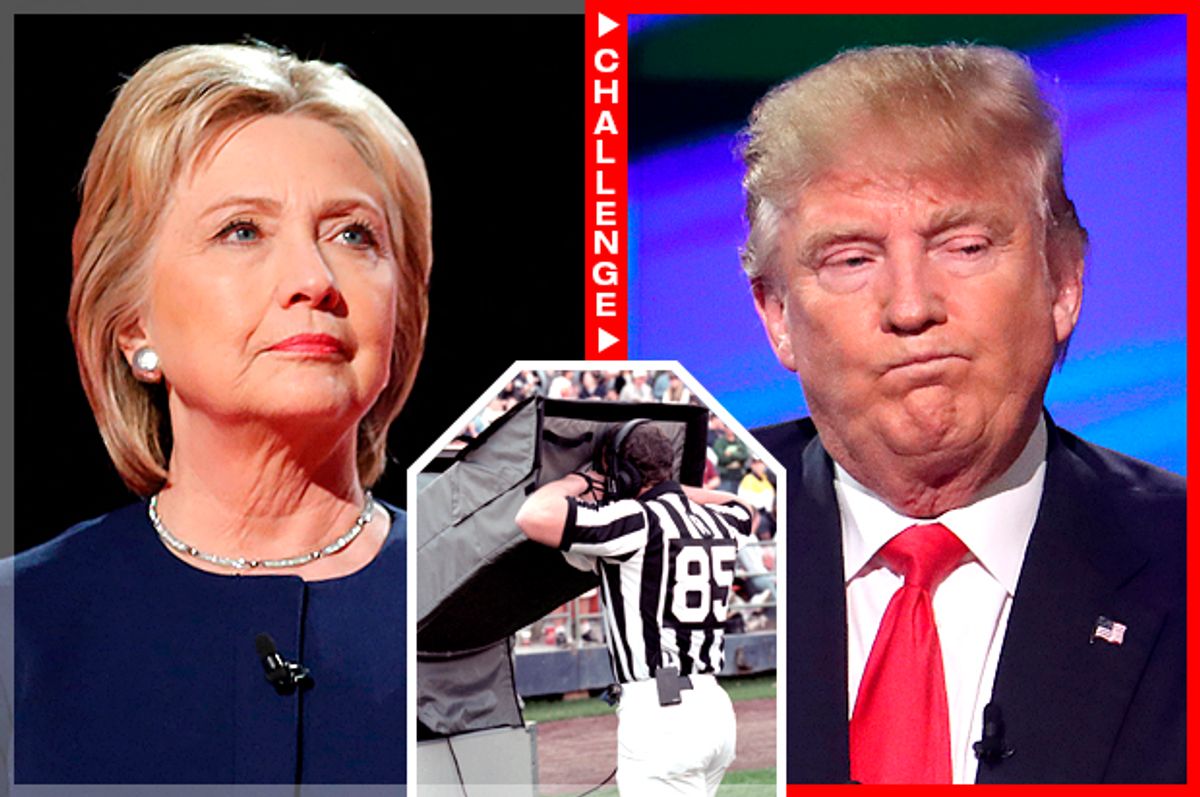 As you gentlemen undoubtedly know, Week 1 of the 2016 NFL season concluded with its usual and unusual fanfare: roaring crowds, jammed parking lots, overserved fans, heartfelt renditions of “The Star Spangled Banner” (with some players kneeling, others raising their fists and an entire team locking arms) and several exciting games decided by just one point.

While each contest this past weekend had its own series of questionable plays, viewers were at least assured a baseline sense of accuracy and “truth” in the outcome. That’s because there’s a system in place to examine and confirm every score, turnover or controversial play. The NFL has tweaked its instant-replay rules over the years in an effort to offer a sense of transparency to fans, casual fantasy players and big-time bettors following the action in Vegas. Although there probably always will be some plays that will generate partisan debate, the NFL has basically brought “fact-checking” into its games through the use of instant replay.

Doesn’t the most important contest in the country deserve the same treatment? After working in Silicon Valley for the past decade, I have learned that digital technology can take democracy to a new level. Today facts, videos, photos and public documents are all readily available online for anyone to see. When presidential candidates Hillary Clinton and Donald Trump appeared on last week’s prime-time forum with NBC’s Matt Lauer, America’s collective BS detector started to sound — loudly.

Almost immediately, the electorate and the media began to question whether the moderators of the upcoming presidential debates can hold the candidates to a basic standard of truth.

Therefore, since the future of our country and the world is at stake, I propose that the Commission on Presidential Debates change course and reform a clearly antiquated debate system and bring it into the information age. Specifically, I urge you, as heads of the commission, to leverage the technology built in this country by immigrants and the children of immigrants to perform real-time fact-checking on stage during the debates.

Here is my proposal: During the first presidential debate on Sept. 26, the moderator, NBC’s Lester Holt, should go about his business as usual, sitting in front of the candidates and posing questions — but be joined by a team of fact-checkers from Factcheck.org, a project run by the nonpartisan Annenberg Public Policy Center (itself part of Donald Trump’s alma mater, the University of Pennsylvania). Just like in professional football games, each side would be given two challenges. The candidates could then use them over the course of the 90-minute debate. If one heard a “lie” during the other’s response, he or she could press a button that would illuminate a red light at his or her podium. Once the other side finished its response, the moderator would allow the candidate who “threw the red flag” to explicitly challenge the statement at issue.

Members of the fact-check team would then go to work to determine the veracity of the answer and relay their findings to the moderator. If the challenger were to be correct, then he or she would still have two challenges and the candidate whose statement was found false, well, would be shown to be a liar in front of the whole country. If, however, the challenge were to be unfounded — and the speaker’s statement is determined to be factually sound — then the challenger would lose one of his or her challenges and be shown as ill-informed.

The candidates wouldn’t be the only ones who could issue a challenge, however. Just like how the NFL automatically reviews plays during the last two minutes of a half, the debate moderator and the fact-checkers could weigh in on any possible mistruths after the closing remarks and make the call without a candidate’s being able to respond.

So careful what you say, Mr. Trump and Secretary Clinton, because under this scenario you would not have the final word — the truth would.

Although it’s no game-show gimmick, this new format would make for riveting political theater and has the potential to bring in more than the 100 million expected debate viewers. Most important, though, those who tune in could expect to hear verifiable facts, even if only on a few nights.

I have bounced this idea off a few colleagues and business leaders and their response has been the same: They love it but it would take way too long! This seemed to be a fair point, so I decided to test it. I took the subject of immigration and the proposed Great Wall of Mexico. I wanted to see what each candidate’s record or position was on securing America’s southern border.

Trump has changed and restated his proposed policy of deporting 11 million immigrants in dizzying fashion. During his Fox News discussion with Sean Hannity, his proposal to grant amnesty came back on the table. Yet during his speech days later in Phoenix, it wasn’t.

Sourcing these facts required mere microseconds in a YouTube search. It took me 0.75 seconds to find on Google what Secretary Clinton had said during her acceptance speech at the 2016 Democratic National Convention: “We will not build a wall.” A second search that took another 0.54 seconds, however, turned up a Senate roll call vote on Sept. 29, 2006, when then-Senator Clinton voted for what is known as the Secure Fence Act of 2006. This bill authorized the allocation of $7 billion to build and fortify a 700-mile fence across all of Arizona’s border with Mexico, as well parts of those of California, New Mexico and Texas. So basically, this fact-check took about 1.2 seconds of searching and a few more seconds of reading.

Given what happened last week at the Commander in Chief Forum hosted by NBC News (my former employer) in front of a live audience of veterans and families of veterans, I decided to focus on the much-scrutinized topics of email servers and Iraq. Secretary Clinton's assertion that she took her use of the private email server “very seriously” and "did exactly what I should have done” stood somewhat in contradiction to what FBI Director Comey said on July 5, when he clearly observed about Clinton’s staffers, “There is evidence that they were extremely careless in their handling of very sensitive, highly classified information.” In other words, if challenged, Secretary Clinton would have lost this round of fact-checking.

Trump has claimed that he was against the 2003 invasion of Iraq from the very beginning. In this case, I consulted Factcheck.org, which described a Sept. 11, 2002 appearance by Trump on “The Howard Stern Show” when the host asked Trump if he supported a war with Iraq, and Trump responded, “Yeah, I guess so.” The YouTube video of this segment is like the replay that clearly shows that the ball came out before the knee touched the ground — it doesn’t lie.

Working in media and technology, as we do here at Salon, I fully recognize that this concept, like any innovative idea, needs beta-testing. A director at Factcheck.org told me, “Holding candidates accountable for making false statements is an admirable goal, but live fact-checking is a dangerous thing to do.” He cautioned, “I would be wary of it and, in general, use it only if the statement in dispute already has been thoroughly researched and proven clearly false.”

That’s a high bar, of course, and perhaps that’s just as well. The 2016 debates are only a couple of weeks away and we have some more work to do to get this concept ready for primetime. But an interim step could be taken immediately. Both CNN and MSNBC have begun using a fact-check crawl at the bottom of the screen during their coverage of speeches.

This is a great first step, one we would like to see the commission mandate for all the networks carrying the debates, so that the viewing public could see the record set straight in real time. I am not naive enough to think that these actions would stop the deceptive remarks, but it would certainly make the candidates think twice about it — for once.

Note: A phone message left yesterday to the commission was not returned.