Mel and Sue are leaving the tent: Can "The Great British Bake Off" still rise without these key ingredients?

The funny hosts are the leavening in the amateur baking competition show, and the job is trickier than it looks 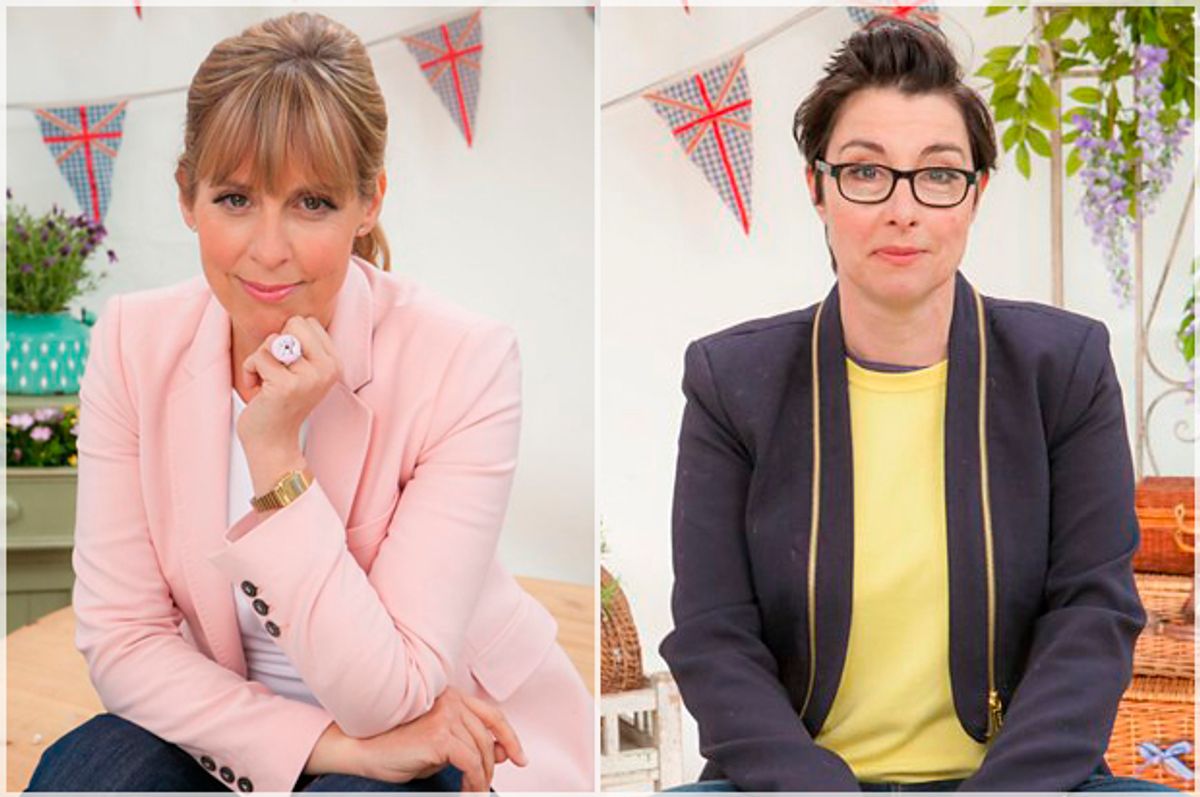 A good bake, to borrow a phrase from “The Great British Bake Off’” judge Mary Berry, requires an understanding of chemistry, a sensitivity to flavor balance and texture, and a respect for precision. This is part of the reason why there are many more home chefs than devoted bakers. Cooks can improvise; so can bakers but only after flawlessly executing a specific master recipe.

Without the elements’ being in proper proportion and at the right temperature, doughs don’t adequately rise, cookies don’t properly crisp and the flavor disappears. Proper adherence and execution to recipe is the difference between confection perfection and a cake wreck.

Knowing this may shed some light on why “Bake Off” fans on social media all but lost their cookies at Tuesday’s news that hosts Mel Giedroyc and Sue Perkins are quitting. Their departure follows yesterday’s news that the series would be departing BBC, where it has aired for seven seasons, for Channel 4 beginning next year.

The typical TV consumer may be excused for wondering why people are making such a fuss over the loss of a pair of hosts featured on a public television culinary series. Reality hosts come and go from unscripted shows all the time, regardless of how iconic they are or closely associated with a show’s brand they may be. But Giedroyc’s and Perkins’ exit feels a bit different, in that their one-of-a-kind partnership and meshing of temperaments is integral to the show’s winning formula.

Part of the emotional spike over Giedroyc's and Perkins' joint decampment can be attributed to fan loyalty. The women are loyal friends and familiar faces to U.K. viewers as the comedy team Mel and Sue. Their spectacular on-screen amity has won the pair its own subset of followers within the “Bake Off” faithful.

“Bake Off,” known to American viewers as “The Great British Baking Show,” recently completed its third season on PBS. The series flouts a number of unscripted television conventions, beginning with the fact that it is upbeat, genteel and populated by contestants who support and respect one another. By reverently focusing on the process of baking, “The Great British Bake Off” or “Baking Show” fosters a new appreciation for the creativity and focus required to execute biscuits, cakes, puddings and breads impressive enough to pass muster with experts.

Each individual operates under the pressure of time limits while navigating an unpredictable environment. It’s hard to get all your ingredients to optimal room temperature when the room happens to be under an open-air tent in Berkshire’s Welford Park. The unscripted competition’s viewership on PBS is smaller than that in its home nation, where the sixth season finale attracted some 15 million viewers and an audience share of 55 percent.

Perkins’s bawdy double entendres, Giedroyc’s saucy retorts and the pair’s signature challenge cook-off chirp — “On your marks, get set, bake!” — reflects the “British Bake Off’” lighthearted approach to very serious displays of skill and inventiveness. If Berry and her fellow judge, celebrity artisan baker Paul Hollywood, act as the binding agents in this mixture, Giedroyc and Perkins are the leavening that makes “Bake Off” peculiarly fulfilling television. There is conflict on the show, but it's of the internal variety as each contender attempts to wrestle her ambitions into the prescribed time restrictions. The tension can be thick, but Mel and Sue do (did? sniff) their part to dissipate it with encouragement and playfulness.

American viewers may consider themselves fortunate to be one season behind their U.K. counterparts, in that we still have another cycle of Mel and Sue to savor. (Note: This paragraph has been corrected since the story's original publication, thanks to an eagle-eyed reader.)  It’s a safe bet British fans will be just fine as well. When a show strikes gold with a format as solid as “The Great British Bake Off,” it’s likely to keep on humming.

Then again, it would be neglectful not to mention CBS’ “The American Baking Competition,” and ABC’s “The Great Holiday Baking Show,” two wan attempts to translate the “British Bake Off” format into series fit for American palates. Berry came stateside to judge ABC’s version, and Hollywood evaluated CBS’ competition, but both shows failed to impress, in no small part due to the ineffective mélange of hosts and judging personalities. In effect, neither had their Mel and Sue.

One point this show drives home is that there are many ways to create differently delicious versions of the same cake. It's also true that substitutes exist for pretty much any ingredient in any recipe, but that doesn't mean the finished product will taste the same as the original version. Otherwise we’d all be going gluten-free.