President Obama chides media on treatment of Clinton and Trump: "We can't afford to act as if there's some equivalence here" 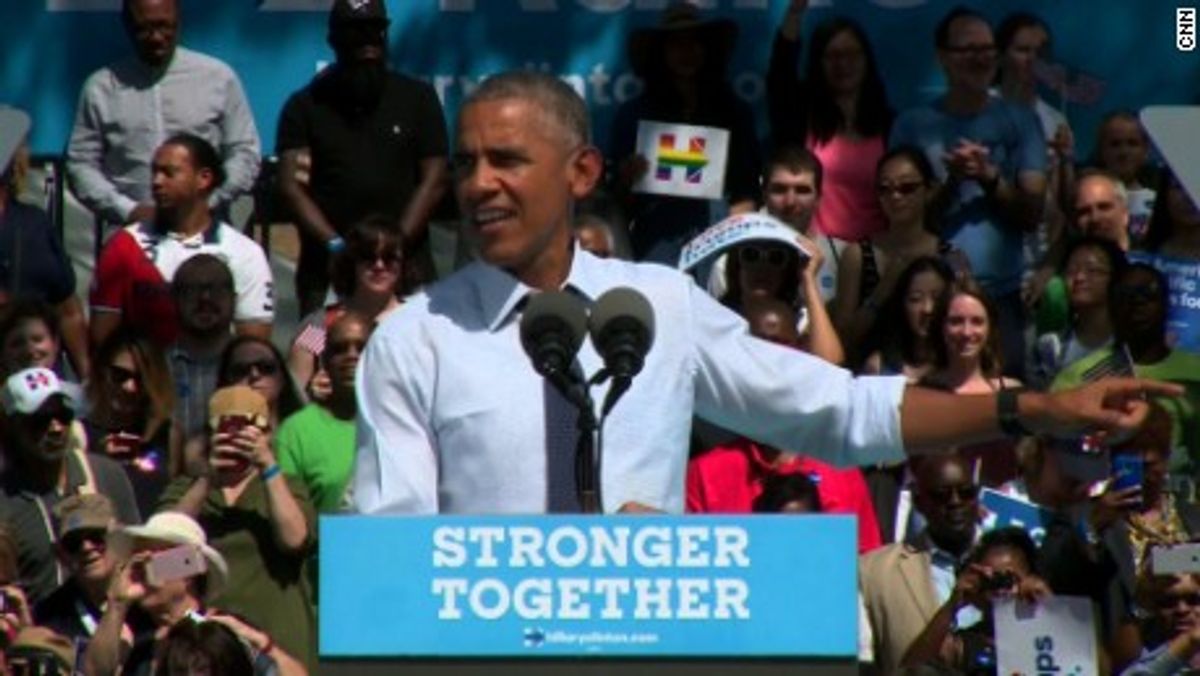 With less than four weeks to go until voting registration closes in Pennsylvania, President Barack Obama hit the campaign trail in Philadelphia for his first solo rally on behalf of Democratic presidential nominee Hillary Clinton on Tuesday.

In front of the steps of the Philadelphia Art Museum made famous in the film "Rocky," the president came out swinging strongly against Clinton's Republican rival Donald Trump, explicitly naming the birther turned White House aspirant for the first time while chiding the media for giving him a pass on his inflammatory rhetoric.

"You want to debate who's more fit to be our president?" Obama said."One candidate who's traveled to more countries than any secretary of state ever has, has more qualifications than pretty much anyone who's ever run for this job and the other who isn't fit in any way, shape, or form to represent this country abroad and be its commander-in-chief."

Obama continued, "So somehow as things go on because we've become so partisan, our standards for what's normal have changed. And Donald Trump says stuff every day that used to be considered as disqualifying for being president. And yet because he says it over and over and over again the press just gives up and they just say, well, yeah, OK."

Critiquing the coverage Trump has received in comparison to Clinton, Obama said, "You can't grade the presidency on a curve." The president noted, "This is serious business. And when we see folks talking about transparency. You want to debate transparency? You’ve got one candidate in this debate who's released decades worth of her tax returns. The other candidate is the first in decades who refuses to release any at all."

Obama also said, "You want to debate foundations and charities? One candidate's family foundation has saved countless lives around the world. The other candidate's foundation took money other people gave to his charity and then bought a six-foot-tall painting of himself."

“He had the taste not to go for the 10-foot version,” Obama cracked.

“America’s got a lot of businessmen and women who have succeeded without hiding their taxes returns, or leaving a trail of lawsuits, workers who didn’t get paid, people feeling like they got cheated,” Obama said.

Pointing to Trump's repeated assertion that he was opposed to the war in Iraq despite having supported an invasion in 2002 in a Howard Stern interview, Obama provided the fact-check that has often been missing from prominent media figures: "Well, actually, he wasn't," Obama said.

"But they just accept it," the president said about media organizations. "So the bottom line is, is that we can not afford suddenly to treat this like a reality show. We can't afford to act as if there's some equivalence here. To be president, you have to do your homework and you have to know what you're talking about and you've got to apply steady judgment even when things don't go your way and you've got to make the tough calls even when they're not popular."

Added Obama: "Even when they take years to pay off and you have to handle criticism without taking it personally, just brushing it off. And then go ahead and get the job done. And that's something I learned."