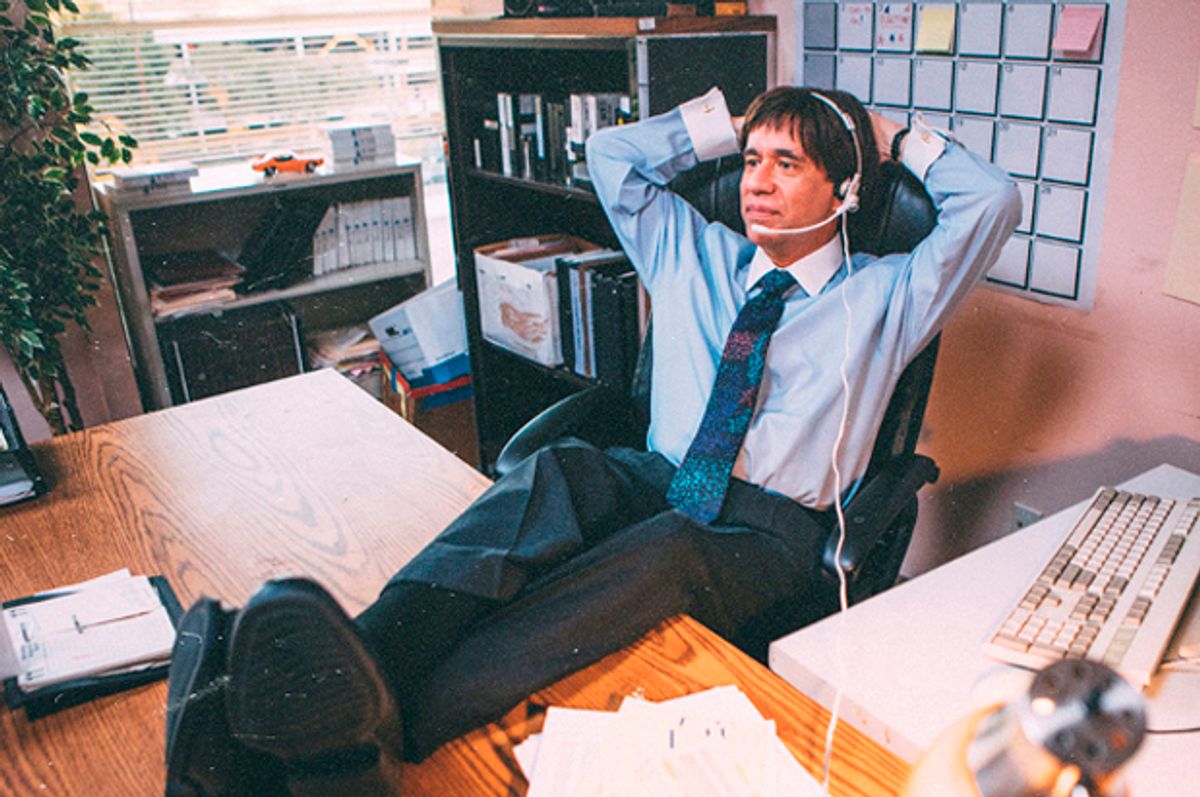 Last week Hillary Clinton summed up Donald Trump’s latest campaign antics by saying, “Every day that goes by, this just becomes more and more of a reality television show. It’s not a serious presidential campaign.”

This was not an earth-shattering revelation by any stretch. Nor is Clinton the only person to make this observation about Trump. Rather, what the former host of NBC’s “The Apprentice” has done is make his place in the 2016 presidential campaign into watercooler fodder, possibly overriding anticipation for the new fall shows or the Emmys.

Putting Trump’s and Clinton’s campaign styles into a larger context, however, is probably more beneficial than simply enduring the increasingly loopy new cycle that his antics are creating. The 2016-2017 television season officially launches next week, and for viewers who prefer thoughtful entertainment with their politics, this one may be just as important as the news.

A number of politically relevant series are either debuting or returning to the schedule, offering shorter-term comfort with a touch of historical framing. In addition to Sunday night’s return of Showtime’s straight-shooting weekly doc series “The Circus,” this week brings the debut of PBS’ “The Contenders: 16 for ’16,” which kicks off on Tuesday night at 8 p.m. This and the “Frontline” election-year examination of the candidates, “The Choice 2016,” arriving Sept. 27 at 9 p.m., do their part to illuminate the intricate machinations of the political process, although “The Choice” tends to be a lot more sobering than just about anything else.

Given the anxiety surrounding this election, many prefer filtering the ever-morphing and expanding lunacy through a comic lens. Thank heavens, then that TBS’ “Full Frontal with Samantha Bee,” returned with new episodes on Monday night. Bee’s searing political analysis adds quotable sensibility to the ludicrous cacophony blaring back to us from the campaign trail. While “The Daily Show with Trevor Noah” has kept watch, Bee has been terribly missed during her hiatus. (Her HBO counterpart John Oliver also serves this purpose beautifully, but “Last Week Tonight” won’t return until Sept. 25.)

All these shows are genial escorts to guide us through the litter-strewn carnival ground that is the 2016 presidential campaign. The humor and insight on “Full Frontal” and “The Circus,” in particular, can serve as both balm and warning.

“The Contenders,” meanwhile, offers an educational, albeit shallow, wade through past presidential campaigns that marked shifts in how such battles are mounted and run. Episodes also remind us that some things have not changed that much over the years: There’s still value in styling oneself as a candidate who isn’t beholden to the establishment and who makes off-the-cuff remarks — even those not based in fact. And female candidates continue to be subjected to a double standard, one likely to stand even if we do elect a woman to the highest political office in the country.

The first episode of “The Contenders,” “Chisholm/McCain — The Straight Talkers,” illustrates these ideas by looking at the very different political lives and campaigns of former New York Rep. Shirley Chisholm, who became the first black candidate to seek the presidential nomination in 1972, and Arizona Sen. John McCain, who ran for president in 2000 and 2008.

I suppose that’s one way of unearthing common ground between these two. Another is to point out that although Chisholm handled her campaign with utmost seriousness, the establishment laughed her off because she was a black woman with Oval Office ambitions. McCain, maverick though he was, is a white male who was anointed by the Reagan administration, who had prominence on the national stage before he decided to run for president.

At a time when the civil rights and feminist movements were still fighting to win equality in everyday settings, Chisholm’s declared candidacy was considered to be symbolic at best.

Chisholm’s campaign was underfunded from the beginning and never truly supported by white feminists or black male politicians; the most prominent, California Rep. Ron Dellums, eventually abandoned her for the party’s apparent nominee George McGovern. “Women are under a different kind of scrutiny than men,” Chisholm observed, a concept with which Clinton has some familiarity.

None of these were obstacles for McCain to overcome. Even his status as a maverick won him plenty of respect in his unsuccessful bid for the Republican nomination in 2000. Where it came back to bite him was in 2008, when he flipped a number of his most important positions in order for the establishment to see him as a palatable candidate. By then he had been very much bought, was entirely willing to be bossed and ran on his predecessor’s platforms, promising security and promoting his military expertise. By then the country was sliding into a recession and yearning for generational change. Enter Barack Obama.

Looking at the opening episode of “The Contenders” as an allegory for the Clinton campaign (though Watson never says as much), “Dean/Buchanan: The Flamethrowers” may shed some additional light on why so many voters are willing to label Trump, an inexperienced, unfiltered boor, as "anti-establishment" and profess to value that he says what he’s thinking. In very different ways, presidential candidates Howard Dean and Pat Buchanan spoke to a similar level of anger and disillusionment. Dean even got some mileage by allowing his passion to erupt forth at campaign rallies — until his famous “yee-ah” broke loose and did him in.

The strongest aspect of “The Contenders” is its array of interviews, particularly with the candidates at the heart of each profiled campaign. It’s interesting to observe Dean, Buchanan and McCain looking back on their respective experiences with honesty and dispassionate clarity; this adds a level of intimacy the usual (and quite useful) array of academics and former political peers wouldn’t be able to provide. (Chisholm passed away in 2005.)

Noteworthy for different reasons are former senior Bush adviser Karl Rove's additions to the conversation, in that he portrays the part of the oily operative to the very last. (Asked for thoughts regarding Dean’s imploded campaign, Rove chortles for a moment before offering, “We could have had a lot of fun with him.”)

Though Watson recently told critics that “The Contenders” is designed to appeal to political junkies and newbies alike, less politically inclined viewers may be best served by the eight-episode series, produced by the host’s company OZY Media.

It is less of an in-depth examination of these campaigns than a drive-by, reminding us that these past historical chapters took place and the people who wrote them existed. Future episodes compare the campaign stories of  vice presidential candidates Geraldine Ferraro and Sarah Palin; and presidential contenders Michael Dukakis and Mitt Romney, Gary Hart and Jesse Jackson, Ross Perot and Ralph Nader, and Barry Goldwater and Ronald Reagan.

Uniquely muddy as this presidential campaign season has been, parody may be a more effective coping tool. IFC’s “Documentary Now!” has that angle pretty well covered with Wednesday’ season premiere, “The Bunker,” debuting at 10 p.m.

Like many of IFC’s originals, the mockumentaries featured in “Documentary Now!” can be too precious and narrowly appealing, drawing the keenest appreciation from film nerds. But what else can a person expect from a series that exists for the express purpose of lampooning nonfiction cinema? The genre is having its moment right now, but many of the docs Fred Armisen and Bill Hader spoof are decades old. When faux host Dame Helen Mirren welcomes us to the show's 51st season as opposed to its second, one almost believes her.

Even so, “The Bunker” has a special currency in this run-up to November’s election, in part because the documentary on which it's based, 1993’s “The War Room,” followed James Carville and George Stephanopoulos as they successfully steered Bill Clinton’s 1992 campaign to the White House.

A person doesn’t need to have seen “The War Room” to get a kick out of “The Bunker,” though the former is currently streaming on Hulu. You only have to know who Carville and Stephanopoulos are to appreciate Hader’s distillation of the former into his “Bunker” version Teddy Redbones, partner to Fred Armisen’s “Boy Hunk of the Beltway” Alvin Panagoulious.

That nickname, by the way, is better than the ones assigned to Redbones. “They always write the same stuff about me,” Hader quips in his character’s deep-fried drawl. “Mississippi Machiavelli, or . . . succubus, or uh, what’s the other one? Suspected arsonist. But you know what’s the one thing they leave out? Undefeated!”

The pair hooks up with the floundering gubernatorial campaign of a former city councilman and hapless numbskull, Ben Herndon, who is competing the well-funded and completely qualified incumbent Tom Lester for no justifiable reason. Like other “Documentary Now!” episodes, much of “The Bunker” comedy is gentle, although some of its better gags are unintentionally reminiscent of real-world campaign insanity. Panagoulious and Redbones even manage to gin up a death threat. The truly odd part is, although “The Bunker” version is more innocent than real world events, it’s mordantly funny because it could be true.

The fact that the real presidential election is stranger than “The Bunker” fiction or light nonfiction could be more than enough political entertainment for most. Polls and voter habits indicate that most Americans have made their selections at this point anyway. Unlike the endless news chatter presently masquerading as a reality competition’s aftershow, “The Contenders” or “The Choice” won’t necessarily tell us what we want to hear. But they may arm us with the knowledge we keenly need to understand the gravity and significance of the selection set before us, even if at least one of these candidates refuses to take this business seriously.