"Wilco is not your average assignment": Guitarist Nels Cline on how the band changed his life — and how much he changed the band

Salon talks to Cline about Wilco's chemistry, "Schmilco" and how long he waited to learn all the band's "baggage" 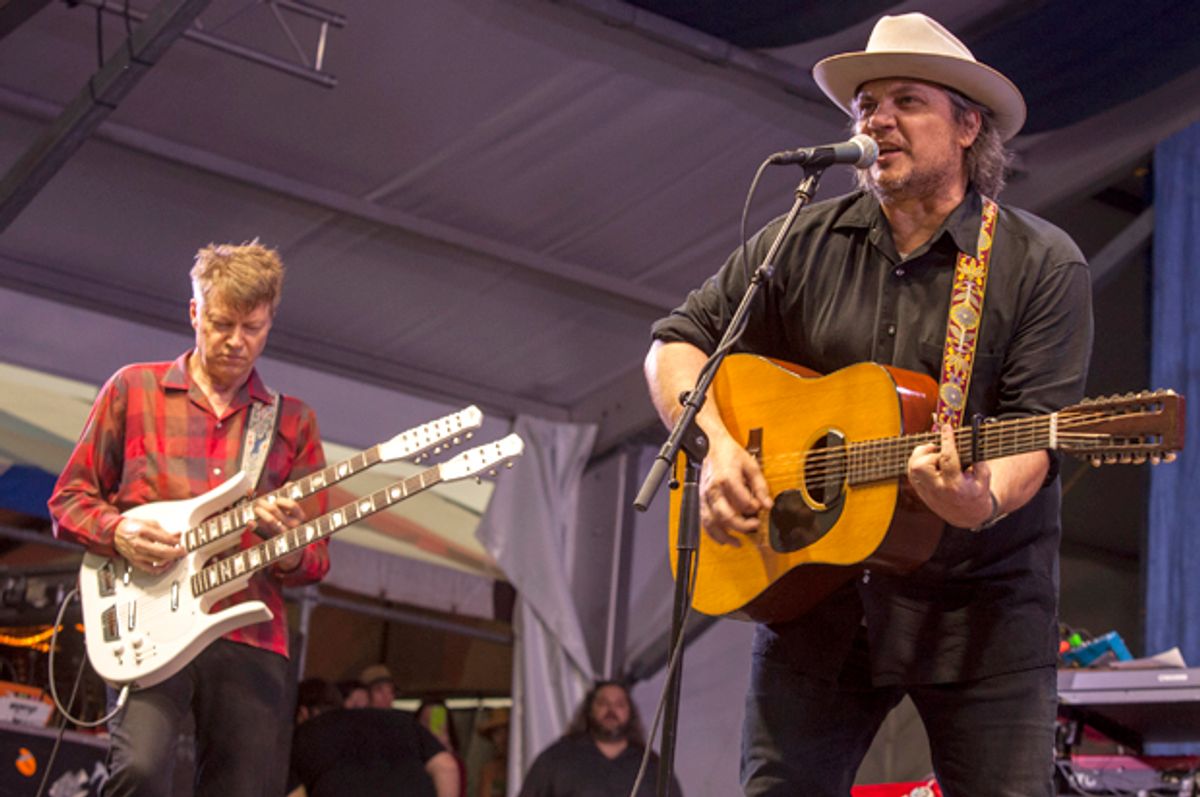 Wilco is a band that’s nearly impossible to predict. The new Wilco album, “Schmilco,” shows the band’s acoustic, introspective side and it has arrived a year after the spontaneous, fuzzed-out record “Star Wars.” Some of both albums, different as they are, came from the same sessions.

We spoke to Nels Cline, the long-revered experimental guitarist who joined the band shortly before 2006’s “Sky Blue Sky.” (He also appeared on the band’s live album, “Kicking Television.”)

As productive as this onetime alt-county band had been, its staff changes and lead singer Jeff Tweedy’s personal demons — chronicled in the movie “I Am Trying to Break Your Heart” — made the group a very unstable unit. With Cline’s arrival, Wilco settled down significantly, and its lineup has been unchanged since.

Cline also just released a two-disc jazz album, “Lovers,” which is heavy on standards and understated playing that recalls Jim Hall’s. It ranges from the classic “Beautiful Love” to a song from Henry Mancini’s “Breakfast at Tiffany’s” score and Sonic Youth’s “Snare Girl.”

Cline spoke to Salon from his home in New York. The interview has been lightly edited for clarity.

Let’s start with the new Wilco album: On an initial listen, it's a more subdued, introverted record. Some of it was put together when you did “Star Wars,” I think.

Give me a sense of what it was like to play those songs, what the experience of connecting with those numbers was like.

Some of those songs I didn't actually know would end up being on two different records because [Jeff Tweedy] was writing them mostly at the same time. It didn't surprise me, you know: There was a time when even during the making of “The Whole Love,” where there's so much diverse material, that Jeff was thinking like, Wow, I don't know if this should be two different records or whatever.

So I think that quite often we're working on materials that seem at first in . . . rough form to be perhaps disparate, and then [they become] joined together as one record with the exclusion of a bunch of songs.

So there're always many outtakes. In the case of the “Star Wars” and “Schmilco” material, I think, Jeff kind of knew ahead of time that he was going to separate them into material that was what I would like to term more low-key but not down tempo. Where his singing is more dulcet, it’s not full-voice singing, and it's more based around him playing acoustic guitar. And that “Star Wars” would be this, for the most part, seriously rocking kind of record.

And I think early on in the process we started working on the “Star Wars” stuff first, and then we started attacking that [“Schmilco”] material [next] because we kind of knew that was the next record for him.

But I think they both share one similar aspect which is they're both very compressed traditional rock 'n' roll-length records. They're very direct. And they're sort of to the point. And there are very few overarching alarm bells for importance because Jeff, I think, is trying to steer around that. I mean, interestingly to me, “Wilco Schmilco” was the working title for this record for a long time, and I was surprised it ended up being the title when all was said and done.

But I think that in a way that would lead one to believe that it's kind of an almost humorous, sort of frivolous record, when I find it personally to be quite the opposite. I find it to be lyrically one of Jeff's best records and actually quite lyrically direct compared to “Star Wars,” which is actually quite impressionistic lyrically.

So I think it's just his way of steering around expectations and and portentousness.

Right, you don't have any 12-minute “Cortez the Killer”-like heavy songs on this one.

[Laughs] No they're all pretty classic song lengths.

Though if you wanna do one like that — I think your fans would be interested — and you cover, I don’t know, “Like a Hurricane” and Richard Thompson's “Sloth,” you could stretch everything to 15 minutes of guitar jams.

Humorously, perhaps: There’s always a moment before we began a new record where Jeff says, "Man, we should just do like really angry all-instrumental record."

These things never happen. But, there is that sort of underlying  kind of possibility that you never know. And I think Jeff being a you know, a savvy and also kind of self-challenging individual . . .  and the band being pretty flexible, don't rule it out. [Laughs]

That's the funny thing about Wilco. Your fans don't really rule out anything; I don't quite ever know what you guys are going to deliver and that makes it exciting to see you live and to have a new record drop. It's like, What're they going to do this time?

I mean it's certainly an aspect of the band. . . . It's Jeff’s songwriting acumen that attracted me to joining Wilco.

Before you joined Wilco, you had a strong reputation among jazz people and fans of experimental music. You were well-respected and well-liked. And then you get a call from Jeff, 12 years ago. I think it was after “A Ghost Is Born.” Am I right about that?

So after that, and before “Sky Blue Sky,” you get a call from Jeff Tweedy asking if you wanted to join a band that's pretty famous and pretty beloved. And there's also been a lot of pain and turmoil. And I can't think of too many other examples of a new guitarist joining such a major, well-established band. Maybe Mick Taylor joining the Rolling Stones.

Well, for a lot of us, Wilco is one of the big bands of the last 20 years. So to add a major voice to a band like that was a pretty big deal. I mean, the Beatles never did that. So what was it like for you to get that call?

Well I won't lie, I mean, there was an aspect to me joining Wilco that had to do with survival because I was . . . You might think that I was doing great because I was releasing records and playing with a bunch of people on the West Coast. But I was not doing great.

Right, you were still in L.A. at this point.

Yeah, and just driving up and down the coast playing with people, doing whatever I could do. . . . And I wasn't interested in doing anything but the music that I was doing. But it was also very difficult to be doing that.

That said, Wilco is quite a different proposition because I had turned down a couple [of] things that probably would have at least paid my bills but they just didn't seem interesting. But Wilco is not your average assignment, you know.

I knew if I did it, it would be kind of a life changer — which of course it was. But beyond what you said — you used that word “beloved” — I guess I kind of knew that, but I don't think I got the extent to which people were obsessing about everything that Wilco did and everything that Jeff does. And I'm glad I didn't watch the movie 'til I had been in the band about eight years.

Or seven years. Just because the baggage, it's not musical. So I'm only really interested in what I could musically bring to the orchestra.

Right, and I think that you were more in an experimental subculture at that point.

Well, yeah, I mean most of my life, that’s what I was doing. I did play in rock bands leading up to that; I played in the Geraldine Fibbers. I played with Mike Watt, which is how I met the Geraldine Fibbers. I played in a rock band in Los Angeles for the same five people for eight years called BLOC, which was immediately signed and dropped from a major label.

But not in a job or kind of workmanlike way.

You were sort of like any artist trying to make a living balancing it all. Like “I wanna do things that interest me musically, but I also need to pay the rent.” And you're sort of doing that dance and it’s not clear to you that things are going your way commercially even if you’re still excited artistically.

Yeah, and to be honest, I was not getting any younger. I was almost 50 years old when I joined Wilco.

So I was like 48 years old and thinking that I was delusional to think that I would someday actually be able to make a living playing music without constant stress and worry.

And so the interesting thing about Wilco, besides its beloved nature or its artistic vastness and the existence of possibilities, is that they also ended up from the very beginning offering to assist me to do my own stuff more lucratively. So they started helping me to actually be a more successful improviser, to further my own ideas because the idea is that whatever we are doing outside the band is not only gonna make me happy, but will bring something aesthetically back to the band, which I think is absolutely true and quite unique.

Yeah, that doesn't happen very often. It sounds like you didn't have to wrestle with the integrity question because you're joining this popular group. And not only were you able to bring something to them. You were able to keep doing things on the side.

Yeah, I'm the old man of the band. You can't teach the old dog that many new tricks.

There have been a lot of shifts in the Wilco story. You've injected musically a kind of experimental and unpredictable spirit into the band. But as an organization Wilco has actually settled down and become calmer. Do you think that you've had anything to do with that?

No, I mean, if you listen to “Yankee Hotel Foxtrot” and you take that to “A Ghost is Born,” there's already an experimental bent in the band. I think personally that what I have added to the band in terms of that, possibly is a little bit overstated at this point.

I don't know why stability occurred but I think it's a combination of things. The first thing, straight up I would say that it's a good combination of people.

We have not only musicians who really love each other and get along and are enjoying what we're doing, but we're older. The pitfalls of rock and roll life do not loom large and affect the music.

I think that the combination of great chemistry and maturity is what has kept this band of these six individuals together for 12 years now. We're loving what we're doing, and we never know what's gonna happen next. We never know what the next phase is gonna be. And Jeff is really savvy and artistically challenges himself and the rest of the world. He's very smart and, I think, besides his great songwriting he's an excellent leader.

Even my own band has been going for over 20 years now. You know, I'm sort of the kind of guy who would stay with something, which is very kind of un-jazz of me. I like it and I guess it's true. I grew up with band mythology and I still dig it.