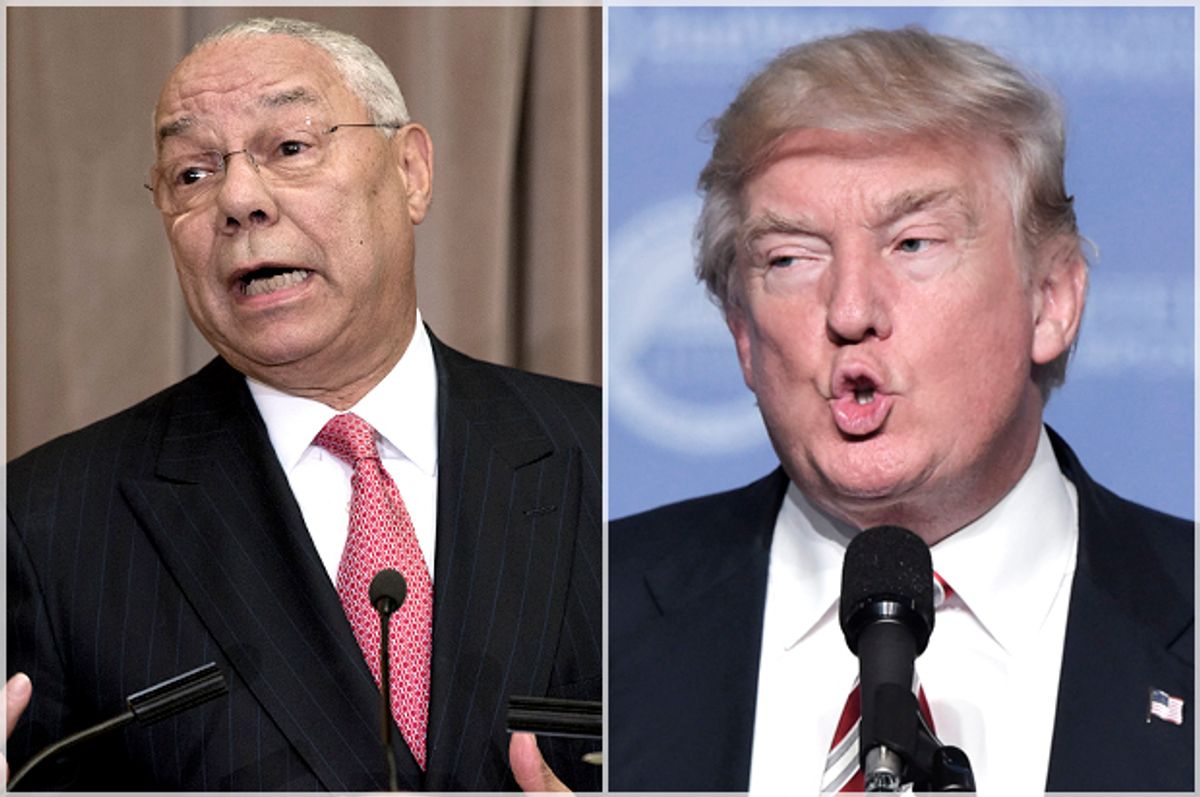 A website that U.S. security officials have suggested may be tied to Russian intelligence services released a series of hacked emails from former Secretary of State Colin Powell that offer insight into the prominent Republican's thoughts on such hot-button issues as Hillary Clinton's private email server, the GOP investigation into the attacks in Benghazi, Donald Trump's presidential campaign and the handling of the invasion of Iraq.

BuzzFeed first reported on the emails leaked by DCLeaks.com on Tuesday evening. The Republican retired four-star general has confirmed that the emails are real. A spokesman for Powell confirmed his email had been hacked, but he had “no idea who did it and no further comment at this time,” according to CBS News.

"The hackers have a lot more," Powell told NBC News.

Last December, Powell wrote to CNN host Fareed Zakaria to complain of the network's coverage of the GOP candidate: "You guys are playing his game, you are his oxygen"

In a June 17, 2016, email to a former aide, however, Powell seemed to have changed his tune on Trump's viability a bit, arguing that the GOP nominee "is in the process of destroying himself, no need for the Dems to attack him," according to BuzzFeed. "Paul Ryan is calibrating his position again," Powell said of the speaker of the House who had only recently decided to endorse Trump at the time of the email.

“You know you’re in trouble when Jerry Springer even thinks it’s over the top,” Powell once wrote of his party's presidential primary. “Let’s not make this a reality show,”said Powell, who endorsed President Barack Obama in 2008 and 2012,.

“He takes us for idiots,” Powell wrote in a subsequent email to the same former aide, Emily Miller, on August 21. "For him to say yesterday that within four years he would have 95% of blacks voting for him is schizo fantasy," Powell wrote, adding, "And (former Fox News chief Roger) Ailes as an adviser won't heal with women."

The former chairman of the Joint Chiefs of Staff slammed Trump for spurring what he called the "racist . . . birther" movement. “He can never overcome what he tried to do to Obama with his search for the birth certificate,” Powell wrote.

“Yup, the whole birther movement was racist,” he argued. "That's what the 99% believe. When Trump couldn't keep that up he said he also wanted to see if the certificate noted that he was a Muslim," Powell wrote in the August email.

"As I have said before, ‘What if he was?’ Muslims are born as Americans everyday.”

Most notable, Powell described Trump as a "national disgrace and an international pariah.”

"He appeals to the worst angels of the GOP nature and poor white folks," he wrote in another email.

Powell offered sharp criticism of Democratic presidential candidate Hillary Clinton as well, not mincing any words in his private emails. Powell appeared to be very frustrated with the former secretary of state in a number of the emails.

"Everything HRC touches she kind of screws up with hubris.” Powell wrote to his business partner Jeffrey Leeds.

“I didn't tell Hillary to have a private server at home, connected to the Clinton Foundation, two contractors, took away 60,000 emails, had her own domain,” Powell said in a Feb. 4 email to former Reagan White House chief of staff Kenneth Duberstein.

“Sad thing,” he continued, “HRC could have killed this two years ago by merely telling everyone honestly what she had done and not tie me to it.”

Powell lamented in his exchange with Leeds, “I told her staff three times not to try that gambit. I had to throw a mini tantrum at a Hampton’s party to get their attention. She keeps tripping into these ‘character’ minefields.” Powell explained that had tried to settle the matter by meeting with Clinton aide Cheryl Mills in August 2015, but Clinton’s “minions” keep “making a mistake trying to drag me in, yet they still try.”

Plus, he wrote, "Hillary's mafia keeps trying to suck me into it."

Clinton sought Powell’s advice at a dinner on June 16, 2009, at former Secretary of State Madeleine Albright’s house, according to emails released by Democratic Rep. Elijah Cummings released earlier this month. Powell gave Clinton “written guidance on why and how [he] had been doing it.”

Powell wrote of the entire scandal in a leaked email, “Dumb. She should have done a ‘Full Monty’ at the beginning.”

“Benghazi is a stupid witch hunt," Powell wrote about another Clinton-related scandal. In a email exchange with his State Department successor Condoleezza Rice, Powell chided the ongoing GOP investigation into the 2012 attack. "Basic fault falls on a courageous ambassador who thoughts Libyans now love me and I am ok in this very vulnerable place.”

“But blame also rests on his leaders and supports back here. Pat Kennedy, Intel community, DS and yes HRC," Powell wrote, referring to Clinton's initials. "DS" is not identified.

On the Iraq War

Rice is at the center of another leaked email exchange that sheds light on the Bush administration's handling of the 2003 invasion of Iraq. The two former secretaries of state both criticized Secretary of Defense Donald Rumsfeld of the George W. Bush administration after journalist Bob Woodward disputed Rumsfeld’s argument that he had always been skeptical of creating a democracy in Iraq.

According to BuzzFeed, Powell initiated the 2015 exchange by emailing Rice, who was the national security adviser at the time of the Iraq invasion, with a link to Woodward’s comments.

“First, we didn’t invade Iraq to bring democracy — but once we overthrew Saddam, we had a view of what should follow,” Rice responded. “If Don and the Pentagon had done their job (after claiming the rights to lead post-war rebuilding — things might have turned out differently).”

She added, “Don should just stop talking.” Rice continued, “He puts his foot in his mouth every time.”

Powell said in response, "The boys in the band were brain dead.”

And Powell wrote, “Doug and Paul claims they had a plan (turn Iraq and our Army over to Chalibi) and leave.” He  appeared to reference Bush administration officials Doug Feith and Paul Wolfowitz as well as the late Iraqi politician Ahmed Chalabi, who died last year.

“43 knew what had to be done,” Powell continued, referring to Bush, “specifically rejected the Chalibi crowd and as you say the boys in the band were brain dead.”