U.S. boosts military aid to Israel to $3.8 billion per year in largest package in U.S. history

U.S. is giving $38B over the next 10 years, while Israel expands illegal settlements on occupied Palestinian land 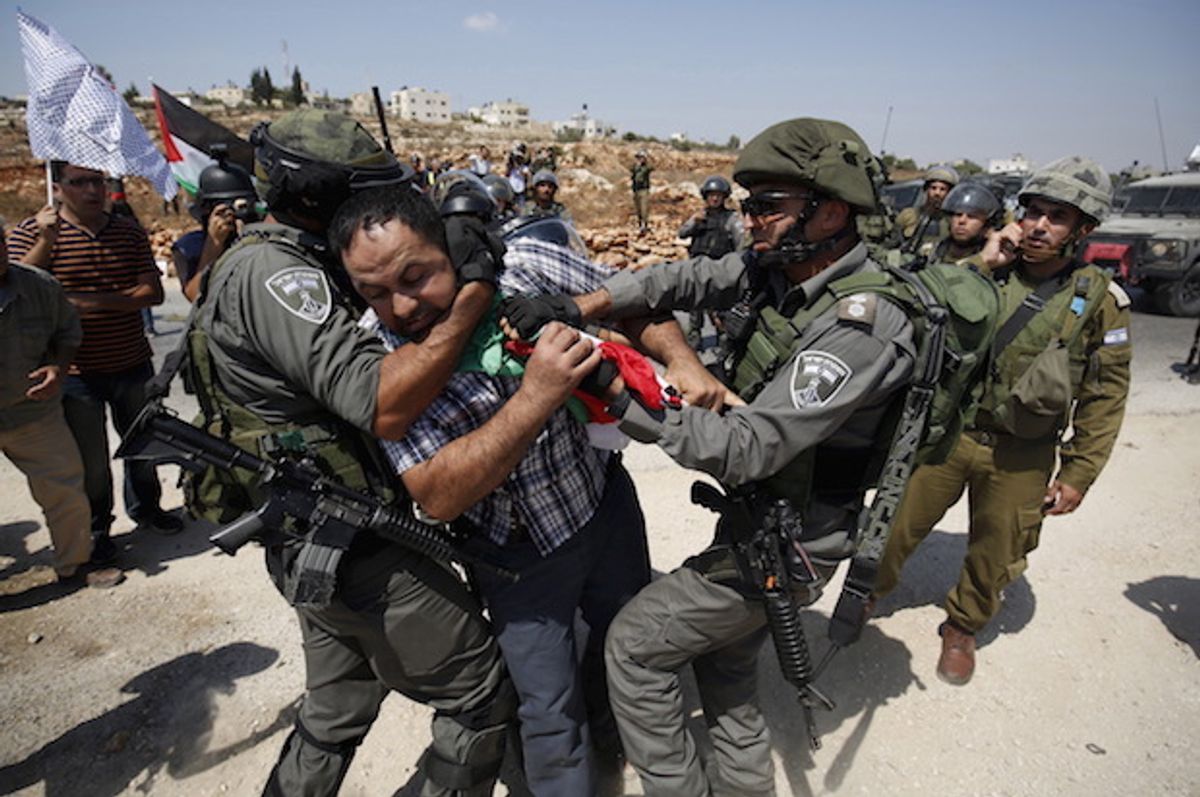 Israeli forces detain a Palestinian protester during a demonstration against illegal Israeli settlements in the occupied West Bank village of Nabi Saleh, near Ramallah on September 4, 2015 (Reuters/Mohamad Torokman)
--

The Obama administration is breaking records, boosting military aid to Israel to an unprecedented $3.8 billion per year.

Under a new 10-year deal, called the Memorandum of Understanding, the U.S. is providing Israel with $38 billion of military aid from 2019 to 2028.

The U.S. State Department stressed that the new agreement is "the single largest pledge of bilateral military assistance in U.S. history.‎"

The deal comes at a moment while Israel is rapidly expanding illegal settlements in the occupied Palestinian territories. Violence also continues to escalate under Israel's military occupation, which has continued unabated, in contravention of international law, since 1967.

"I'm delighted to join you as we reaffirm the unbreakable bond between the United States and Israel," she said. She noted the "ironclad bond" has been maintained "across parties and administrations."

"This marks a significant increase over our existing funding," Rice stressed. "At a time when we're tightening our belts across the board, with the harmful sequestration spending cuts set to return in just a couple of years, this MOU nonetheless greatly increases our military assistance commitment to Israel."

"And that's not an accident; it's a reminder of the United States' unshakeable commitment to Israel's security," she stressed.

In the past eight years, the U.S. gave Israel nearly $24 billion in military aid. At least $3 billion was spent on the Iron Dome, Israel's missile interception system.

The bulk of the new aid package, $33 billion, will be foreign military financing funding. The other $5 billion is for missile interception systems like the Iron Dome.

The second-largest recipient is Egypt, which takes in approximately $1.5 billion. Together, Israel and Egypt receive roughly 75 percent of U.S. foreign military aid.

In her speech, Rice said a lot about Israel's security, but said little about Palestinians, who have lived under illegal Israeli military occupation for nearly 50 years. She only briefly mentioned the Palestinians at the end of her speech; in two short sentences, she called for a two-state solution to the conflict.

Rice said nothing of the occupation, nor did she acknowledge the continued expansion of segregated settlements on occupied Palestinian land, which the U.N. has made clear are illegal.

The social justice group Jewish Voice for Peace, one of the fastest growing U.S. Jewish organizations, with more than 60 chapters and 200,000 members and supporters, released a statement condemning the agreement.

“Just a few months after Palestinians in the occupied territories began their 50th year living under repressive Israeli military rule, the United States is once again committing to a decade of increased military aid to Israel, despite that country’s deplorable human rights record," said Rebecca Vilkomerson, executive director of Jewish Voice for Peace.

"The main beneficiaries of this unprecedented amount of aid will be not just the Israeli military, but also the U.S. arms industry," she stressed.

“At a time when the U.S. claims to oppose the expansion of Israeli settlements built illegally on occupied Palestinian land, increasing the military aid package is rewarding destructive Israeli behavior that violates longstanding official US policy and international law. As a result, the U.S. is effectively underwriting Israel’s occupation and apartheid policies towards the Palestinians," Vilkomerson added.

Rice boasted in her speech that the U.S. is delivering the F-35 fighter jet to Israel — making Israel the only nation in the Middle East that has it. The funding increase, Rice noted, will help Israel update its fighter aircraft fleet and buy more F-35s and F-15s. The military aid will also allow the Israeli military to bolster its ground forces.

"This funding has permitted Israel to acquire the world's most advanced military capabilities," Rice said. She emphasized that it will ensure that Israel can "preserve its qualitative military edge."

"Since the day he took office, President Obama has consistently provided Israel with all of the support it needs," Rice added. "We are proud that no other administration in history has done more for Israel's security."

Yousef Munayyer, a political analyst and executive director of the advocacy group the U.S. Campaign to End the Israeli Occupation, also blasted the agreement. He pointed out that, mere days before the Memorandum of Understanding was signed, "the State Department slammed Israel's settlement building, destruction of Palestinian homes, land seizure and displacement of Palestinians, and stated bluntly that these actions raise questions about Israel’s intentions toward peace."

"Juxtaposed, these events highlight the abject failure of the United States to put its money where its mouth is when it comes to Israel policy. Is it any wonder that Netanyahu feels he can persistently bite the hand that feeds him and get away with it?" Munayyer added, referencing Benjamin Netanyahu, Israel's hard-line right-wing prime minister.

In her speech, Rice also honored former Israeli President Shimon Peres, who had a stroke and was hospitalized this week. Rice noted that it has been 23 years since the Oslo Accords were signed between then-U.S. President Bill Clinton and then-Palestinian leader Yasser Arafat.

In 2010, a video of Netanyahu speaking in 2001 in private to a group in an illegal settlement in the occupied West Bank was leaked. The tape shows the present prime minister bragging, "I de facto put an end to the Oslo accords," by using deceptive political tricks to seize Palestinian land.

The only way to deal with the Palestinians is to “beat them up, not once but repeatedly, beat them up so it hurts so badly, until it’s unbearable,” Netanyahu added in the leaked video.

Munayyer lamented that, “With this commitment, the United States is once again giving Israel a stamp of approval for a military occupation that just entered its 50th year, and what amounts to an Israeli military dictatorship that rules over millions of Palestinians who have no right to vote in the state that rules their lives."

He added, "President Obama may point to this as an example of his efforts to support Israel despite his difficult relationship with Prime Minister Benjamin Netanyahu, but in the long run history will record that Obama helped support and prolong Israel's apartheid policies, even as the world was increasingly turning against them.”