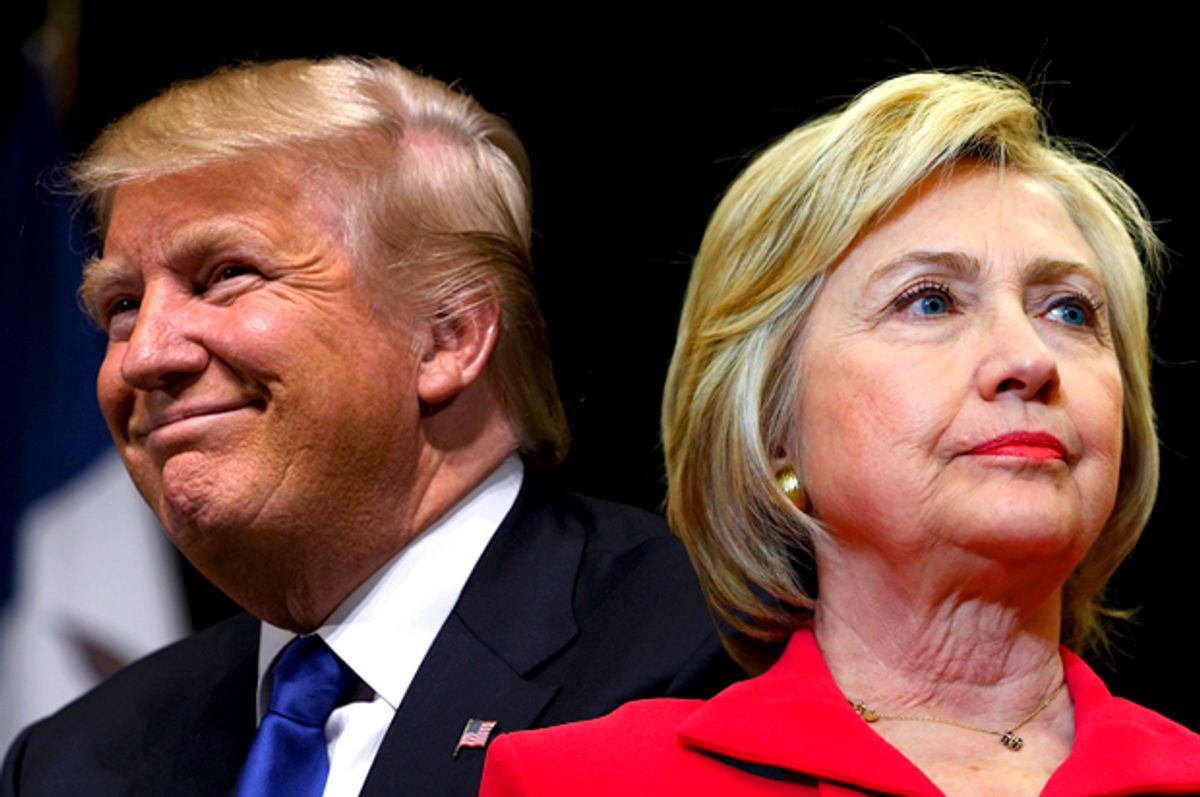 For those who survived Gamergate, a 2014 dustup over the place of women in the video-gaming world, the 2016 election is instilling a deep and unpleasant sense of déjà vu. It's not just that Republican presidential nominee Donald Trump and his acolytes are playing to the same grievance about "social justice warriors" who dare to think that white men should share power with women and people of color. It's that Trump and his men are using the same tools as the Gamergaters: gaslighting, projection, working the refs and leaning heavily on often subconscious double standards that allow white men to have more benefit of the doubt than others.

What's really terrifying is that for a surprisingly long time Gamergate worked: For months, anti-feminists in the tech world were extremely effective at undermining feminists and creating the illusion that a bunch of bullies might have legitimate grievances. Eventually, most witnesses to Gamergate woke up and saw it for what it was. I have no doubt the same will happen with the Trump campaign. Even if many people don't get it right now, history will remember the campaign as a black mark on our democracy, forged in bigotry.

But there's a real chance now that the grand awakening won't happen until after the election, and if that happens there's a very good chance Trump will win and we will be screwed. Which is why it's useful to revisit Gamergate and think long and hard about how it is that bigots manage to manipulate large crowds and even the media into minimizing the dangers that bigots represent.

While there had been already been some harassment of feminist gaming critics, Gamergate really took off in 2014, when a young man named Eron Gjoni was dumped by his girlfriend: video-game developer Zoe Quinn. Rather than gracefully accept the end of the relationship, Gjoni wrote a nearly 10,000-word screed in which he painted Quinn as a slut and accused her of trying to manipulate men with her sexuality.

The strategy worked. With her success in the industry and her willingness to reject a man, Quinn tickled misogynist anxieties about ambitious, disobedient women. Soon she was awash in thousands of harassing messages and forced to leave her home out of concerns for her safety.

Bigots and reactionaries rarely admit their unsavory motivations. So as the harassment campaign grew in size, with more ambitious and outspoken women added as targets, a justification was needed to distract critics. Gamergaters seized on Gjoni's insinuations that Quinn had exchanged sex for positive game reviews.

There was no evidence of such a thing, of course, but by raising questions, the bigots had their cover story. This was about "ethics in journalism" not misogyny. Targets seemed to be chosen strictly on the basis of feminist views, not any evidence of unethical behavior. But the hand-wringing about "ethics" and "corruption" and demands about "raising questions" worked. Many media representatives and other gatekeepers were cowed into trying to treat Gamergaters as people with legitimate concerns about corruption, instead of participants in a misogynist witch hunt.

"You are a young man who loves video games and hates their increasing corruption by money and hype," David Auerbach of Slate wrote in what was supposed to be a criticism of Gamergate but ended up reinforcing the notion that people go after a woman's private sex life because of ethics in journalism.

"An animosity lurks between the press and its readership that really is unique to video games," Erik Kain of Forbes wrote, as if Gamergates had genuine concerns about journalistic ethics that led them to harangue Quinn about the number of sex partners she has had.

The South by Southwest conference in March, in some bizarre bid for balance, allowed a pro-Gamergate (anti-feminist) panel, apparently to mollify Gamergaters who were worried that the addition of anti-harassment programs to the lineup needed balancing.

By the time the panel actually took place, however, most members of the media had woken up. The insinuations of corruption being used to justify Gamergate had never had a real shred of proof and eventually most journalists admitted that the whole thing was just an old-fashioned anti-feminist witch hunt.

Which brings us to 2016 and the Republican candidate, Trump. He is a misogynist and a bigot and these beliefs animate his campaign. But Trump knows well enough to throw up a bunch of distractions, confident in his ability to manipulate journalists into ignoring the real story (what a corrupt, bigoted, waste of space he is)  and go chasing after non-scandals about his feminist opponent.

The Gamergaters had muddied the waters for months with false allegations that Quinn had bought good game reviews with sex. Similarly, Trump runs around insinuating — his favorite phrase is "something is going on" — that there's some dark scandal lurking around Clinton.

Trump insinuates that her health is failing or that the Clinton Foundation is a slush fund. And members of the media, under pressure to appear "neutral" and "balanced" are led along by the nose, dutifully blowing Clinton's minor illness way out of proportion and publishing breathless headlines insinuating corruption in the Clinton Foundation, even though the reporting shows the opposite.

Meanwhile, Trump's well-documented corruption receives much less coverage in the media than the non-scandals around Clinton. Similarly, Quinn received far more interrogation for her innocent, short-lived fling with a Kotaku writer than Gjoni did for his abusive, stalking behavior, even though the latter is a matter of public record that any fool with two eyeballs can see.

This election is Gamergate all over again. With Gamergate, the real story was one about misogyny and harassment, but for months efforts to discover if Gamergaters had a legitimate grievance distracted from the true issues at stake. The real story of this election is that an over-the-top bigot like Trump is able to amass such a following, but the media is becoming distracted by evidence-free insinuations and non-scandals about Clinton.

And it's working. Even though Clinton is basically honest and Trump tells nutty lies at every turn, voters are starting to judge him as more trustworthy. The witch hunt strategy is effective, especially when media gatekeepers just lie down and let it happen.

But this time, it's not just video-game culture that's at stake but our very democracy. There's less than two months to go until Election Day, so representatives of the media better figure this out faster than they did with Gamergate, or this country could be in serious trouble.