Poll panic is here! Yes, Trump is closing, but here's why it's meaningless

This week's polls may suggest Trump is inching closer to the White House, but the truth is he remains miles away 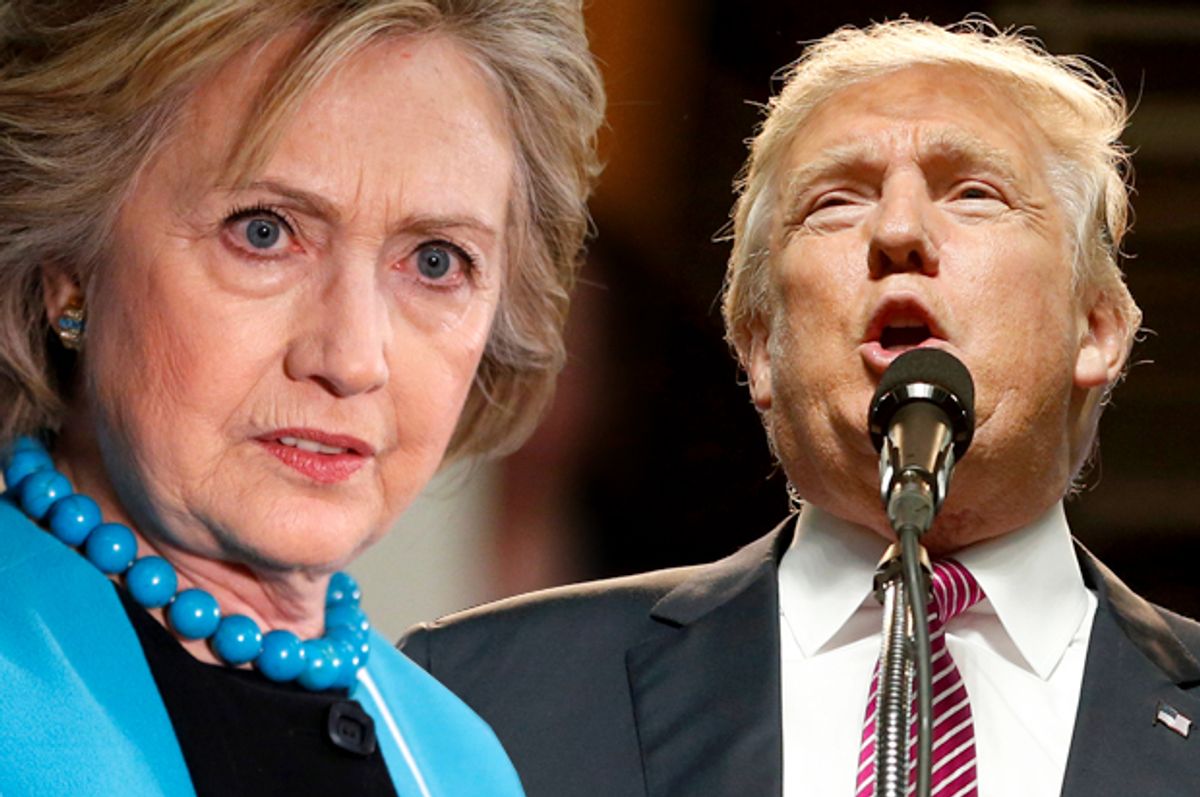 As you read this, pollsters are preparing to release surveys conducted over the past weekend and its immediate aftermath, when Hillary Clinton made her accurate but perhaps poorly phrased comment about Donald Trump’s “deplorable” fans, then nearly passed out at a 9/11 memorial service in New York before revealing she had been trying to “power through” a case of walking pneumonia. This allowed the media to start reporting on rumors about her health, which had previously been the province of the right-wing fever swamps from which Trump has drawn much of his support and campaign staff.

In other words, the news of the moment will likely result in some polls at both the national and swing-state level that do not look good for Clinton. Hey, look, it is already happening!

These polls will add to an already vibrant chorus of grumbling about Clinton's inability to demolish Trump. Certain political writers who will tell you that the carrot-colored real estate mogul has “momentum.” Hey, look, that too is happeningalready happening!

This would all be a lot more frightening if the narrowing polls had not been totally predictable, independent of any caterwauling from the media about health scares and Kinsley gaffes (what journalist Michael Kinsley called politicians' statements that are truthful so therefore not really mistakes). For we have now come to the Great Tightening, that point of every recent presidential election cycle when the candidates see their numbers in national and swing-state polls inch closer to each other. Predictably, this is being followed by the Great Freakout, when supporters of the leading candidate set their hair on fire and run through the public square screaming for water.

But this weekend’s stumbles by Clinton are also why articles that claim Trump has “momentum” tell us nothing more than that the writer had a quota to fill for the day. Momentum is an overrated concept in national elections at the presidential level, especially this late in the game.

In 2012, for example, Republican nominee Mitt Romney was supposed to have momentum after he performed much more strongly in his first debate against Barack Obama than most people expected. During this year’s Democratic primaries, Sen. Bernie Sanders was said to have momentum when he won the Michigan primary and again when he won Wisconsin a few weeks later.

But nothing about Romney's debate performance or Sanders' primary victories changed anything about the underlying factors that had Obama and Clinton in the lead in those two races. Demographically speaking, the built-in advantages for Obama – his incumbency, the Democratic Party’s general edge in a national vote – were still there after the debate, and Romney was not likely to erase them. In the case of Sanders, the states that voted in the weeks after Michigan and Wisconsin were demographically much more favorable to Clinton. She won them, and eventually the nomination.

In the current race, Clinton still has the edge, thanks to the underlying factors. A generic Democratic candidate still has a natural majority in some of the largest, most electoral-vote-rich states. She still has strong on-the-ground organization and voter-turnout operations in battleground states. The Trump campaign is nowhere close to catching up with the number of operatives on the ground and state campaign offices to drive them.

Yes, the polls have tightened in some of the swing states and may still tighten more. Yes, this is affecting the down-ballot races to the point where it may impact the Democrats’ chances of retaking the Senate. Yes, that will hurt Clinton’s legislative agenda if she wins. Yes, if you assume everything lines up perfectly for Trump, he still has a slightly less narrow path to victory than he did last week.

But the presidential race was always going to be competitive, much as liberals might have laughed like stoned hyenas when it became clear the GOP was going to nominate Donald Trump. The electorate is so polarized and the parties so ideologically rigid that any Republican candidate always starts with a floor slightly north of 40 percent of the vote. Any Democrat was always likely to be just a few points higher than that. The onus was always going to be on the GOP candidate to run a perfect campaign to catch up, something Trump has proven incapable of doing.

It is possible the stakes for a loss feel higher this year. That is partly because we may have forgotten how high they felt in, say, 2008, when Sarah Palin had a shot at being a heartbeat away from the presidency. It is also partly because Trump is a genuinely dangerous person — a racist demagogue who knows less than nothing about governing, legislating, diplomacy, foreign policy, economics. The list goes on. He is a narcissist with no empathy for anyone not named Donald Trump, and he’s got skin so thin he’s liable to order an invasion of China if Panda Express forgets to include a fortune cookie with his takeout order.

We should all be genuinely horrified that this xenophobic Creamsicle has any shot at all at winning the White House. But he is still much more likely to lose than win, no matter what the polls and the media tell us over the next couple of weeks.