More dangerous than Trump: Why we should fear Mike Pence for refusing to call David Duke "deplorable" 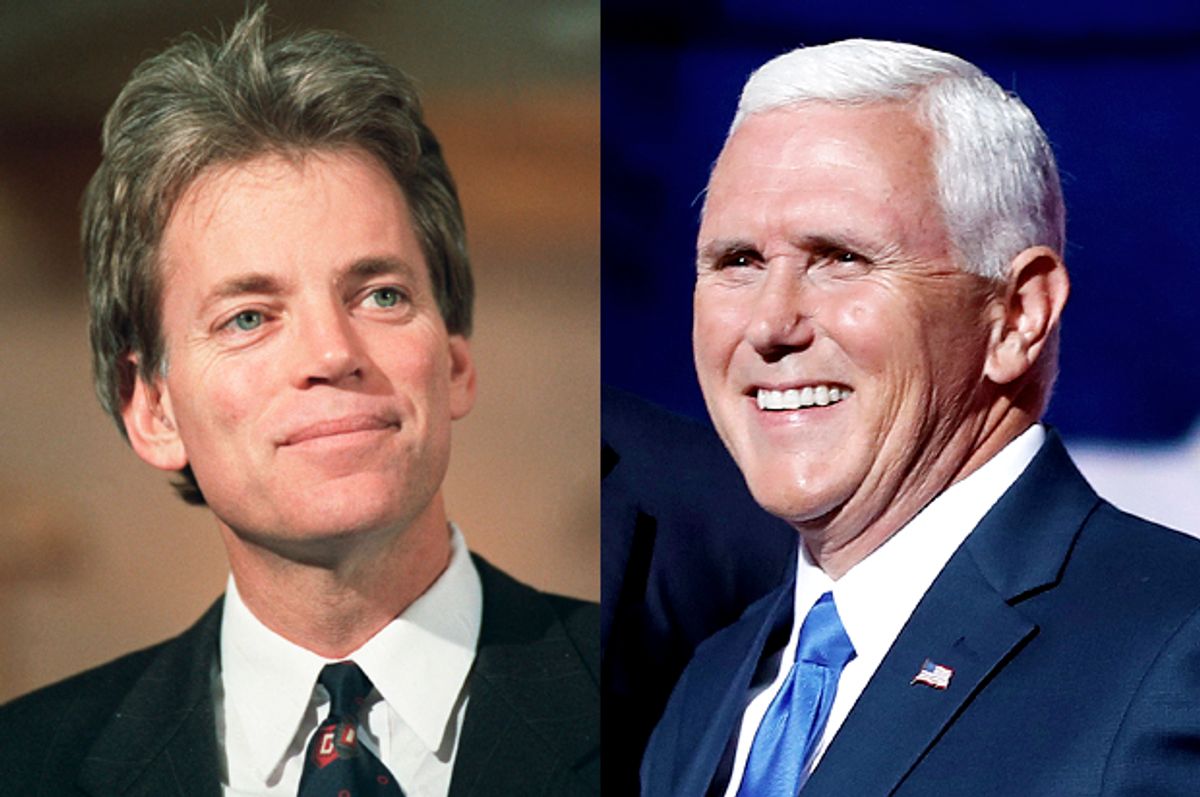 He said, "I'm not in the name-calling business.” Pence continued, “We don't want his support and we don't want the support of the people who think like him.”

Following a meeting with House Republican leaders the next day, Pence again refused to describe David Duke as “deplorable.”

This was not an error. Pence’s refusal to call an unapologetic white supremacist such as David Duke “deplorable” is a strategic choice and message.

It is one that David Duke and his ilk heard loud and clear. Duke explained to Buzzfeed that:

It is true that 2016 is the political year of Donald Trump.

He has dominated the American corporate news media with at least $3 billion in free coverage. Trump is a fascist who has normalized a type of nativist, racist, bigoted, misogynistic and juvenile politics that is usually confined to the margins of the country’s public discourse.

Trump is a political performance artist who is remarkably entertaining: As a reality TV star and student of professional wrestling, Trump is an expert at the staged and spectacular event. His political rallies are “safe spaces” for violence, rage, vitriol and hatred. In all, these events are human zoos and political rodeos for angry white Americans who feel that they have lost “their country” and yearn to “make it great again.”

It is also true that Trump's candidacy represents a nadir in modern American politics. It is Mike Pence and what is signaled by his refusal to describe Duke as “deplorable,” however, that has the potential to do the most harm to the country in the long term.

Politics is a copycat game. In this game, political entrepreneurs try to gain personal power and influence by leveraging and manipulating the grievances, needs and wants of various groups of people. Trump’s ability to win more votes than any Republican presidential primary candidate in recent American political history demonstrates that there is a ready and eager audience for “old-fashioned” white racism and bigotry.

The assertive influence over Donald Trump and the Republican Party of the alt-right — a moniker that's really just a rebranding effort for overt white nationalist and white supremacists, which already have an outsized influence over right-wing politics — is an additional reminder that mining white racism has historically resulted in political gold for (white) American politicians.

The United States’ changing racial and ethnic demographics also present a fertile moment for the politics of white rage, racial resentment and a sense of embattled whiteness and white privilege. Moreover, toxic hegemonic white masculinity became enraged by the election of the United States’ first black president, Barack Obama. It may be pushed over the edge into a full-on apoplectic fit if Hillary Clinton becomes president.

While he may be vanquished in a landslide by Clinton, there are many tens of millions of Americans in the Republican Party and right-leaning independents who support Trump and his particular brand of fascist Herrenvolk politics. This is a public whose desires will not be ignored.

The corporate news media prefers a narrative in which political change is described as a “revolution,” the result of a “crisis,” or with outcomes that are somehow “surprising.” In reality, politics is a marathon and not a sprint: Long-term political change is often incremental.

To that end, Trump’s rise to power over the Republican Party is the product of at least five decades of white identity politics under the Southern strategy and a right-wing news-entertainment-disinformation machine that systematically lies to and manipulates its audience.

Trump’s ascendance is also a reflection of a Machiavellian dynamic whereby Republican elites and other policymakers foment a state of economic, political and social misery for “red state” America, dishonestly blame “big government” and “minorities” for the troubles and then promise to solve the very problems they actually created.

If Trump’s political moment is to have enduring power, he is unlikely to be its torchbearer. While entertaining, Donald Trump is ultimately too bombastic, hostile and unpredictable. It will instead be “reasonable” and “measured” professional politicians like Pence who repackage Trump’s fascism and white nationalist politics for more mainstream consumption.

In the political horror movie that is the 2016 presidential race, Trump is the fiend who wields a chainsaw or ax, hacking, slashing and killing unsuspecting travelers and teenagers at a campsite or as they walk down the side of desolate highway. By comparison, Pence is the gentleman serial killer. He wears a business suit, is charming and appears to be relatively harmless. Trump gives cheap thrills and frights. But ultimately it is “respectable” Republicans like Pence who are far more dangerous to the American body politic because they can steadily operate in plain sight, preying on a largely unsuspecting and vulnerable public.