"Repeal this blank check for endless war": Lawmaker demands end to 9/11-era Authorization for Use of Military Force

15 years after casting a lone vote against the AUMF, Rep. Barbara Lee is pushing for its repeal 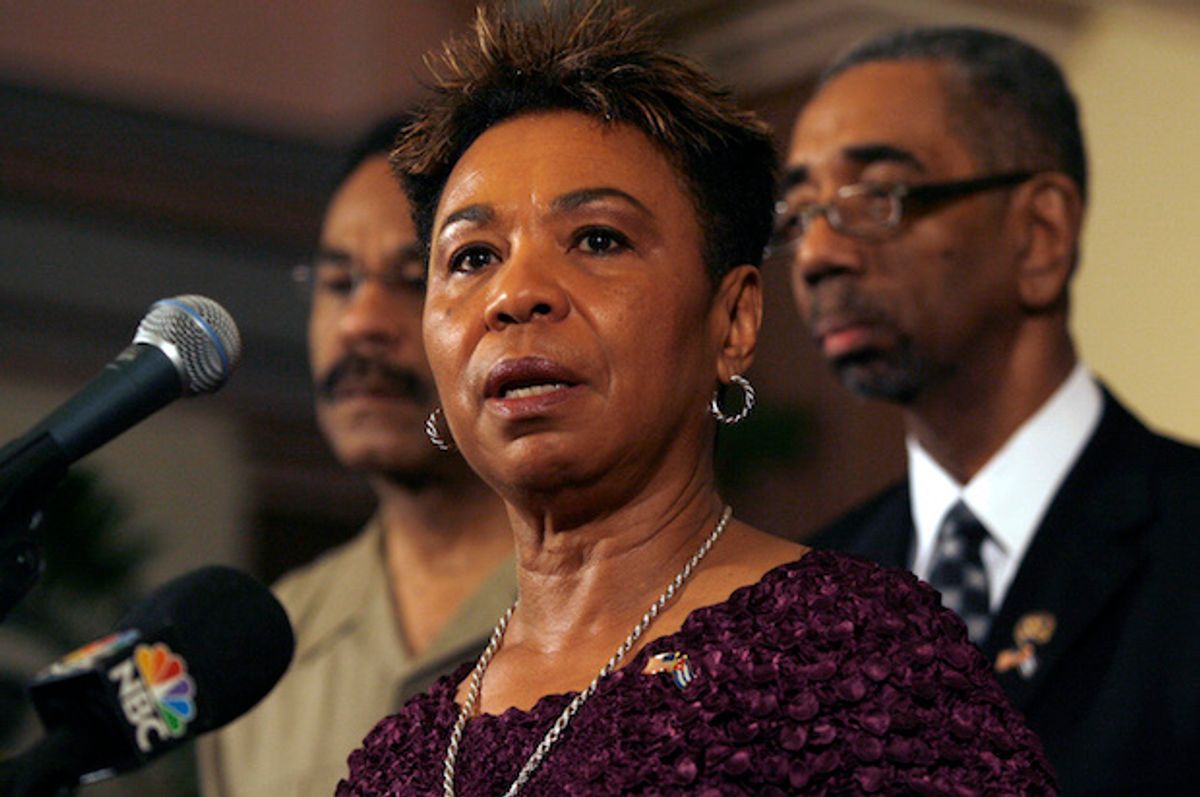 Since its passage three days after the attacks, the Authorization for Use of Military Force, or AUMF, has been used at least 37 times to wage war in at least 14 countries, without any oversight from Congress. This is according to a study by the Library of Congress, commissioned by California Rep. Barbara Lee.

On Sept. 14, 2001, Rep. Lee was the sole member of both chambers of Congress to vote against the AUMF. Every single senator present voted for the authorization, 98 to 0. In the House, 420 representatives were for it, with Lee representing the lone voice of opposition.

"I am convinced that military action will not prevent further acts of international terrorism against the United States. This is a very complex and complicated matter," Rep. Lee said in a powerful speech on the House floor.

"Our country is in a state of mourning. Some of us must say, let’s step back for a moment. Let’s just pause, just for a minute, and think through the implications of our actions today, so that this does not spiral out of control," she cautioned. "As we act, let us not become the evil that we deplore."

"Fifteen years ago, Congress gave up its Constitutionally-mandated responsibility to give the American people a voice in matters of war and peace," Lee told Salon.

"The American people deserve better; it’s past time to restore this constitutional power," she added.

"We continue building bipartisan support to repeal this blank check for endless war," she told Salon. "We are working to educate members about the dangers and costs of these perpetual wars."

Staff in Lee's office noted that the congresswoman has introduced several pieces of legislation in an effort to try to amend or repeal the AUMF.

In March 2015, Lee introduced H.R. 1303, a bill that states that the AUMF "has been used to justify an open-ended authorization for the use of military force and such an interpretation is inconsistent with the authority of Congress to declare war and make all laws for executing powers vested by the Constitution in the U.S. government." The bipartisan legislation, which has five co-sponsors, calls for the authorization to be repealed. It made little progress in the House.

Hoping to repeal the authorization, Lee has also offered several amendments, including one to a Department of Defense appropriations measure, which received 146 votes for fiscal year 2017, and the National Defense Authorization Act, which received 138 votes.

"That’s certainly an improvement from one," James Lewis, Lee's communications director, said optimistically in an email to Salon.

Lewis said Lee is concerned about "the costs and consequences" of the United States' many wars. "She’s reflecting on the loss of our servicemembers and the war costs — more than $1.7 trillion since 2001," he said.

"There is also a dimension of this on our national security, such as Gitmo becoming a recruiting poster," Lee added, referencing the Guantánamo Bay prison, where the U.S. government's abuse of detainees (many held without charge or formal trial) became a symbol for Islamist militants.

After her lone vote against the AUMF, Rep. Lee was barraged with death threats. Fearing for her safety, she hired bodyguards. Now, however, Lee says her lone vote has been vindicated by history.

Pulitzer Prize-winning journalist Glenn Greenwald published a column on the 15th anniversary of the 9/11 attacks titled "Barbara Lee’s Lone Vote on Sept. 14, 2001, Was as Prescient as It Was Brave and Heroic."

The California congresswoman was also interviewed on Democracy Now this week. "I voted against that resolution 15 years ago because it was so broad that I knew it was setting the stage and the foundation for perpetual war. And that is exactly what it has done," she said.

Rep. Lee noted that before the invasion of Iraq, she had introduced a resolution calling for a delay in the authorization for the use of force in Iraq until U.N. inspectors determined if there actually were weapons of mass destruction in the country. Yet she received just 72 votes on the proposed amendment.

In August, the Obama administration launched a new war in Libya — just five years after participating in the NATO bombing campaign that destroyed Libya's central government. President Obama relied on the military force authorization to justify the new war.

"I am deeply concerned about the expansion of U.S. airstrikes in Libya. The U.S. military continues to become more engaged in the Middle East, despite the lack of a Congressional debate or specific authorization," Lee said in a statement condemning the new war, which was launched with little media coverage.

Added Lee: "The American people and our brave men and women in uniform deserve a public debate on this war, including the costs and consequences to our national security and domestic priorities. They deserve a Congress with the courage to debate the war that we are asking them to fight."

She said, "We must stop relying on an outdated and overly broad authorization that was passed nearly 15 years ago. Our military experts are clear: there is no military solution to this crisis."

Today Rep. Lee is optimistic that a campaign is slowly growing inside Congress to repeal what she called a "blank check for endless war." Lawmakers are even joining from the other side of the aisle.

In May, Lee hosted a bipartisan press conference with Republican Reps. Thomas Massie, Walter  Jones and Scott Rigell. The congresspeople called for a new military force authorization for the Middle East, one that would allow Congress to approve wars proposed by the White House.

Progress is slow, but things appear to be shifting.

"There really hasn’t been debate and the [Overseas Contingency Operations] account, black box budgeting and Pentagon’s inability to pass an audit make it even worse," Rep. Lee told Salon.

She added, "The American people deserve to know the costs, in blood and treasure, for these wars."