The general of gossip: Colin Powell's leaked emails depict a juvenile busybody rather than an elder statesman 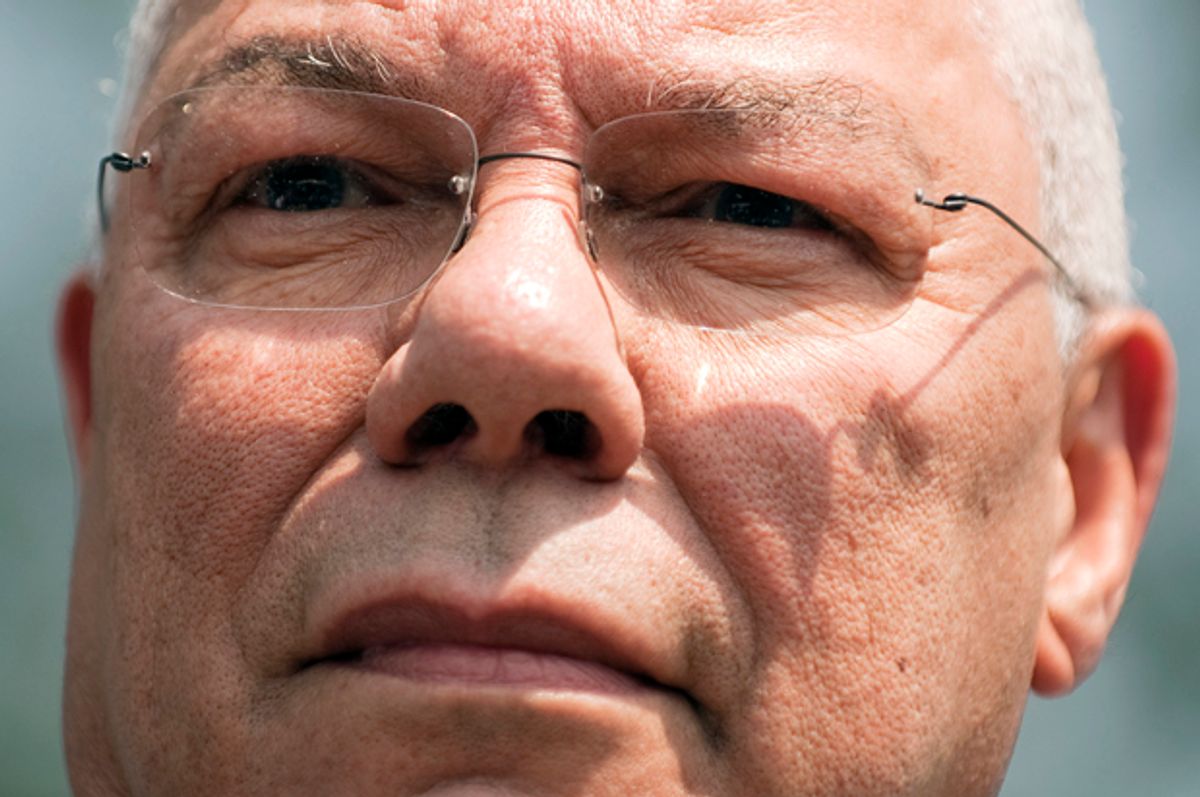 Who would have ever thought that underneath his staid, sedate elder statesman image that General Colin Powell was a catty Real Housewife of the Potomac? If the emails that were hacked and released to the press this week are any indication, he's quite the backbiting gossip, with nasty opinions of just about everyone he knows.

For instance, his old friends the Cheneys were probably upset to read what Colin really thinks about them:

“[The Cheneys] are idiots and spent force peddling a book that ain’t going nowhere.”

Meow. And this about Cheney, Rumsfeld and his old boss George H. W. Bush:

“One day when we both have had too many drinks we can discuss why [President George W. Bush] tolerated [Donald Rumsfeld] and why Dick [Cheney], a successful SecDef, was so committed to Don. I must say I gagged as [President George H.W. Bush] praised him as the ‘best’ at the statuary hall unveiling.”

Gag him with a spoon.

And that Hillary Clinton is such a total screw up:

“Everything HRC touches she kind of screws up with hubris.”

And she's just such a loser:

"I would rather not have to vote for her, although she is a friend I respect. A 70-year-old person with a long track record, unbridled ambition, greedy, not transformational, with a husband still dicking bimbos at home (according to the NYP)."

"Hillary has not been covering here [sic] self with glory. For good reason she comes across as sleazy."

She's actually 68 but it's clear he thinks the decrepit crone is on her last legs:

"On HD tv she doesn't look good. She is working herself to death."

He's quite the petty bitch for a four-star general, isn't he?

(And you would think he'd show some empathy for poor old Bill's reported "dicking" after his own indiscretion was splashed all over the New York Post as well.)

But while he may like totally gag at the idea of voting for that old bag, it's Donald Trump who really makes him want to hurl:

“To go on and call him an idiot just emboldens him.”

“Trump has no sense of shame.”

"Trump is a national disgrace"

"I am back from Bohemian Grove. Surprise, surprise. I sat next to Stephen Harper a couple of time and had a nice discussion. Grove attendees know that Trump is a disaster. Most will vote against bit quite a few will not vote for Hillary and will vote for a third party candidate."

(If you're not familiar with Bohemian Grove, it's an exclusive gathering in California of the most important men in the world each July. No women allowed, natch.)

And he was really upset at the news media for giving The Donald so much free time. It's all about the ratings like that time when Trump got all mad at Fox and Ailes "sent Megyn Kelly off to get over her period."

You might think that since Powell feels so strongly about Trump he would endorse Clinton as he did President Obama if only out of patriotism. But it doesn't look likely. And that's because what really has the general's panties in a bunch is the fact that Hillary Clinton cited his advice to her about how to deal with emails when she joined the State department. He was fit to be tied that they even mentioned his name because he so didn't tell her she should use private email and it's just so exasperating that she told the FBI that she had talked to him about it. It's like she was trying to say that he was just like her and, oh my God, that's just so bogus.

Unfortunately, last week members of congress released an email that was among those requested from the state department which showed that he did tell her  how he used personal email to circumvent the rules so they wouldn't be subject to Freedom of Information requests. Ooopsie.

Colin Powell has a long history of being in the middle of scandals and wriggling out of any responsibility for them. From his involvement in the My Lai massacre, to Iran Contra, to personally blocking President Bill Clinton's promise to allow gays to serve openly in the military, to his infamous testimony before the UN that led to the Iraq war, Powell's fingerprints are on the wrong side of history and the truth time and again and he's always got some excuse as to why it wasn't his fault. Clinton should be overjoyed that this mean cheerleader isn't rooting for her team.