Here's who will win — and who should win — Sunday night, and why 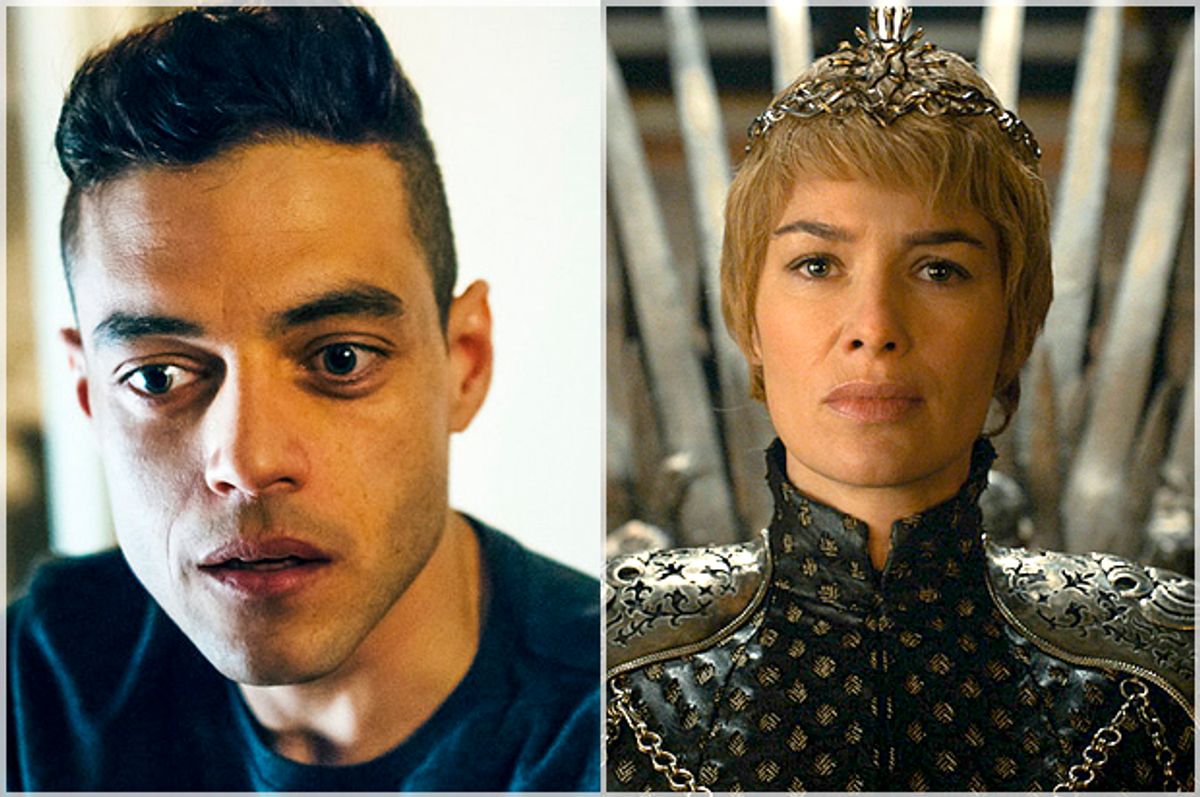 Among people who care about television, the Emmys have long been a reliable source of faint hope and frequent disappointment. We sidle up to each awards ceremony cautiously, thinking maybe Television Academy voters will do right by us this time. More often than not, however, the Emmy Awards show leaves us angrily massaging our temples while the end credits are rolling.

Remarkably the 68th Emmy Awards has bucked that trend by serving up a strong roster of nominees in just about every major category. This makes the odds fair to excellent that Sunday night’s telecast (airing at 7 p.m. ET and 4 p.m. PT on ABC) with be worth watching for reasons beyond evaluating its host Jimmy Kimmel.

Then again, heed that ancient saying about old habits: Those of Emmy voters have deeper roots than an old growth forest. While predicting the outcomes could be trickier this time around owing to the presence of potent first-time nominees, including worthy veterans that finally busted into the ranks (hooray for “The Americans!”), a few wrinkly voting patterns may prevent those contenders from going home with some much-deserved hardware.

Upsets also are a given on awards nights, and Emmy voters tend to deliver a few huge whoppers. All of which is to say, let us pray these predictions are right and wrong in the best possible ways.

This is one of the stronger races and one that could test the longstanding Emmy truth about repeat winners: Voters love them. Not always, though, which is why “Black-ish” has a shot in this category after its incredibly strong second season. Selina Meyer endured a marvelously brutal run on Season 5 of “Veep,” though, and the fact that her tumble occurred during a contentious election year is likely to set the show up for a repeat win in this category.

Who Should Win: “Black-ish”

Who Will Win: “Veep”

That “The Americans” broke into this category is a feat to be celebrated, and near universal critical acclaim may have inspired voters to consider it closely. But USA’s “Mr. Robot” has generated a lot of heat among the industry and viewers, which would give it the edge — if not for a certain series resurrecting a dead hero, presenting a full-scale battle that was a technical marvel and, oh yes, putting a number of powerful ladies on top for once, including television’s most beloved evil queen.

Which Should Win: “Mr. Robot”

Which Will Win: “Game of Thrones”

Pause for a moment to appreciate the creative wealth on display in this category. Every single one of those contenders were must-sees, and if you haven’t watched a couple of them, correct that mishap immediately. Though Season 2 of “Fargo” pulled a handy trick by outshining its excellent predecessor (no small accomplishment), another FX series magnetized viewers with its story, phenomenal performances and John Travolta’s stunning eyebrows.

Which Should Win: “Fargo”

OUTSTANDING MADE FOR TV MOVIE

Television’s miniseries fortune did not trickle down to the made-for-TV film realm. Do you think “A Very Murray Christmas” would be here if that were not the case? With that in mind, the choice is abundantly clear that the race is really between HBO’s entries. And between those two, one of them stars Bryan Cranston.

Which Should Win: “All the Way”

Which Will Win: “All the Way”

OUTSTANDING LEAD ACTOR IN A LIMITED SERIES OR MOVIE

Idris Elba is the clear winner here, in the land of fantasy. Among the Brits, Tom Hiddleston would have a pretty strong shot if not for the presence of Courtney B. Vance, who made Johnnie Cochran flesh and blood for viewers in a way that the 24-hour news coverage of the actual O.J. Simpson murder trial never did. If Vance’s FX co-star doesn’t split the vote, he could win this award. Emmy loves it,  however, when great actors disappear inside their impersonations of historical figures. Voters also adore HBO and Bryan Cranston.

Who Should Win: Courtney B. Vance

Who Will Win: Bryan Cranston

OUTSTANDING LEAD ACTRESS IN A LIMITED SERIES OR MOVIE

Another impressive category, but if you watch Sarah Paulson’s portrayal of Marcia Clark, there’s not much of a contest here.

Who Should Win: Sarah Paulson

Who Will Win: Sarah Paulson

OUTSTANDING LEAD ACTOR IN A DRAMA

This is where wishes could crash hard into reality: Matthew Rhys’ performance went above and beyond his already strong work in “The Americans,” but Rami Malek’s Elliot Alderson is so intense that at times one worries about how his work on “Mr. Robot” is affecting his mental health.

Who Should Win: Matthew Rhys

Who Will Win: Rami Malek

Potential Upset: Kevin Spacey because every year an award goes to a nominee with a name that outdoes his or her actual work. Spacey’s turn on “House of Cards” was about as exciting as Lunesta but, well, you never know.

OUTSTANDING LEAD ACTRESS IN A DRAMA

Nominees: Taraji P. Henson in Fox’s “Empire,” Claire Danes in Showtime’s “Homeland,” Robin Wright in Netflix’s “House of Cards,” Viola Davis in ABC’s “How to Get Away with Murder,” Tatiana Maslany in BBC America’s “Orphan Black,” Keri Russell in FX’s “The Americans”

Emmy, please give the award to Taraji Henson for no other reason than the fact that she is a delicious public speaker. Who are we kidding; that’s not going to happen. What could happen is that voters may finally be swayed by Tatiana Maslany’s mind-boggling execution of different characters within the same body or Keri Russell’s cool spy act. What’s likelier to happen is that they’ll reward Spacey’s co-star, whose performance shone particularly bright in contrast with the dullness of his.

Who Should Win: A toss-up between Tatiana Maslany and Keri Russell

Who Will Win: Robin Wright

OUTSTANDING LEAD ACTOR IN A COMEDY

Aziz Ansari memorably held up a prop book titled “Losing to Jeffrey Tambor With Dignity” when his name was read during the Golden Globes nominees call. He actually lost to Gael Garcia Bernal of “Mozart in the Jungle” — which was a crime — but fortunately that can’t happen this time. Meaning, he will most likely lose to Jeffrey Tambor along with four of his fellow nominees.

Who Should Win: Jeffrey Tambor

Who Will Win: Jeffrey Tambor

OUTSTANDING LEAD ACTRESS IN A COMEDY

Tracee Ellis Ross is a knockout on “Black-ish,” balancing a lightness in her humor with a lovely maternal warmth. But Julia Louis-Dreyfus is a repeat winner. (See the observation about “Veep” in the Outstanding Comedy Category.)

Who Should Win: Tracee Ellis Ross

Who Will Win: Julia Louis-Dreyfus

OUTSTANDING SUPPORTING ACTOR IN A COMEDY

Anyone fortunate enough to experience Louie Anderson’s mind-bending portrayal of Christine Baskets knows that he deserves this one, without question. Then again, Tony Hale has won twice for “Veep.” Why not make it a three-peat?

Who Should Win: Louie Anderson

Who Will Win: Tony Hale

OUTSTANDING SUPPORTING ACTOR IN A DRAMA

In a different season, this award would be Peter Dinklage’s to lose. Jonathan Banks, though, gave a strong showing on “Better Call Saul,” and it would be terrific to see him clinch the trophy in this one. In fact, the only thing he didn’t do was come back to life, lead the charge in the Battle of the Bastards and make us mourn the loss of a CGI giant.

Who Should Win: Jonathan Banks

Who Will Win: Kit Harington

OUTSTANDING SUPPORTING ACTRESS IN A COMEDY

Judith Light showed a gorgeous vulnerability on “Transparent” while also making viewers completely annoyed with her character. Allison Janney, in contrast, is the main reason “Mom” is one of the most underappreciated comedic treasures on broadcast TV.

Who Should Win: Judith Light

Who Will Win: Allison Janney

OUTSTANDING SUPPORTING ACTRESS IN A DRAMA

Emmy could give the dowager countess her due one last time for “Downton.” Or it could do what we all know it should, and crown Lena Headey for making a coup look as easy and scrumptious as sipping wine at happy hour.

Who Should Win: Lena Headey

Who Will Win: Lena Headey

OUTSTANDING SUPPORTING ACTOR IN A LIMITED SERIES OR MOVIE

Without question, Sterling Brown’s work on “The People v. O.J. Simpson” puts him near the top of the list in this category. If Emmy wants to give something to “The Night Manager,” however, handing a win to Hugh Laurie is an elegant and defensible way to do so — especially since he never won an Emmy for “House M.D.” despite having been nominated seven times.

Who Should Win: Sterling K. Brown

Who Will Win: Hugh Laurie

OUTSTANDING SUPPORTING ACTRESS IN A LIMITED SERIES OR MOVIE

Regina King's formidable performance on “American Crime” deserves notice. But out of all the categories in which “Fargo” scored nominations, Jean Smart’s fearsome portrayal of mafia boss Floyd Gerhardt gives the mini its best shot at a win in this one.

Who Should Win: Regina King

Who Will Win: Jean Smart