It hurts to be right: How Scott Walker proved Citizens United wrong 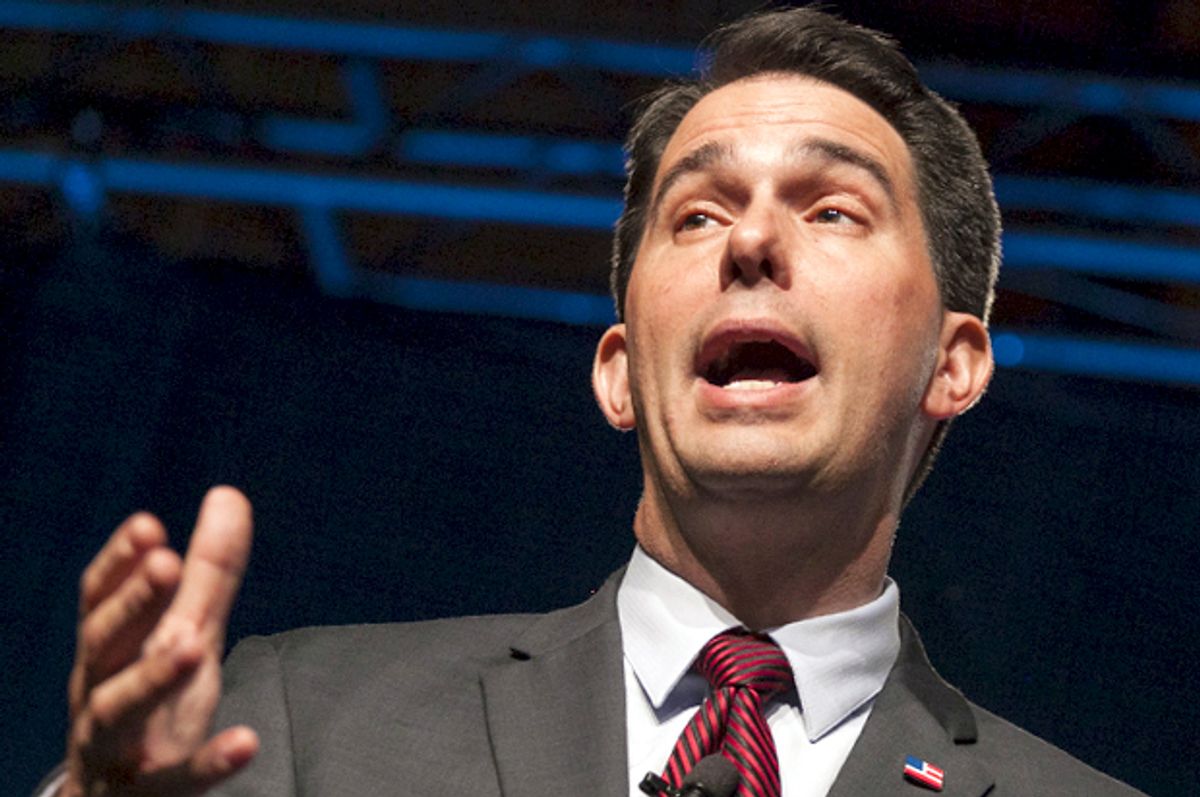 We now have a rare glimpse into the inner workings of a broken campaign finance system.

The Guardian this week published 1,500 previously unreleased emails and financial documents leaked from a now-halted investigation into alleged campaign finance violations by Wisconsin Gov. Scott Walker and his allies.

The leak raises questions about a highly controversial decision to shut down the probe last year by the Wisconsin Supreme Court. Four of that court’s seven justices were elected with $10 million in support (more than the jurists spent on their own campaigns) from Wisconsin Club for Growth and Wisconsin Manufacturers & Commerce, two of the “independent” groups that Walker was accused of illegally coordinating with.

It also raises questions about whether the emails will affect the U.S. Supreme Court, which has been asked to review the Wisconsin decision, and could announce whether it will do so in the coming weeks.

What the emails reveal is both shocking — and unsurprising.

The leaked documents confirm campaign finance reformers’ worst suspicions about political “dark money” and the legal rulings that unleashed it into our elections. And they prove the assumptions underlying the U.S. Supreme Court’s Citizens United decision were incredibly naïve.

That 2010 decision allowed corporate entities to spend unlimited amounts on elections, helping to unleash a tide of “dark money” — election spending by groups that don’t publicly disclose their donors.

In Citizens United, the justices predicted that unlimited corporate spending wouldn’t “corrupt” politicians because it would be totally independent of candidates. But the Wisconsin documents show how many “independent” expenditures are actually controlled behind-the-scenes by candidates’ campaigns.

And, although the court in Citizens United said campaign finance disclosure laws would provide citizens with all the information necessary to “see whether elected officials are ‘in the pocket’ of so-called moneyed interests,” these documents demonstrate that citizens are routinely left in the dark about who is bankrolling their representatives, thanks to corporations and wealthy donors secretly funneling their contributions through phony “social welfare” groups which disguise the identities of their funders.

Most importantly these documents show “dark money” is really only “dark” when it comes to the public’s knowledge. The politicians who benefit from undisclosed election spending know exactly where their financial support is coming from.

In the case of Scott Walker, the leaked documents show that, in the months before his June 2012 recall election, his calendar was packed with meetings with potential donors. Shortly after those meetings, checks of up to $1 million appeared in the account of the Wisconsin Club for Growth, a social welfare nonprofit backed by the Koch brothers that does not disclose donors — and that, under the terms of the Supreme Court precedent, should be independent of the candidates it supports. Yet, the documents show, Wisconsin Club for Growth was actually controlled by Walker’s campaign manager.

Talking points prepared for Walker told the governor to advise donors to give to the Club “in support of your recall,” and to “stress that donations to Wisconsin Club for Growth are not disclosed” and to emphasize “that you can accept corporate contributions and it is not reported.”

The memo lines of some of the checks to Wisconsin Club for Growth reflected why donors gave to this supposedly “independent” group: “Because Scott Walker asked.” Other checks reflected how donors perceived the governor’s relationship with the group; one memo line read “501c4-Walker.”

Keep in mind that donations directly to Walker’s campaign must be disclosed. Corporations cannot donate at all. And that’s why the coordination scheme is so problematic: by Walker’s campaign working with the Club for Growth, controversial donors and corporations were offered a way to evade transparency laws and prohibitions on corporate donations.

Donald Trump was one of those donors. Walker met with Trump for 45 minutes at his Fifth Avenue office in New York City, and that same day Trump wrote a check for $15,000 to Wisconsin Club for Growth.

As he ran for president a few years later, Trump boasted about his donations to Walker. Yet he never gave to Walker’s campaign; he only gave to the Wisconsin Club for Growth.

“I will tell you that our system is broken,” Trump famously declared. ” I give to everybody. When they call, I give. And do you know what? When I need something from them two years later, three years later, I call them, they are there for me. And that’s a broken system.”

Some donors to the Wisconsin Club for Growth didn’t have to wait that long.

“The documents reveal previously unknown donations to [Wisconsin Club for Growth],” the Wisconsin State Journal notes, “such as $750,000 from companies associated with Harold Simmons, the billionaire owner of NL Industries, which produced lead used in paint before such paint was banned, given in three checks … in April and December 2011 and January 2012.”

Simmons’ company faced millions in lawsuits in Wisconsin over alleged lead poisoning of children. But as Walker and legislative Republicans enacted legislation to block those kids from accessing the courts, the public never knew the company that stood to benefit from the bill’s passage had secretly poured three-quarters of a million dollars into Wisconsin elections.

An attorney for a boy poisoned by lead paint, Peter Earle, said he was “trembling with rage” at news of the company’s previously undisclosed contributions.

“What I see is a corrupt morass of government in Wisconsin that has been fueled by corporate money,” Earle said. “How can people have faith in a system like that?”

This was not an isolated example. Past disclosures revealed that the CEO of an out-of-state mining company called Gogebic Taconite secretly gave Wisconsin Club for Growth $700,000 in advance of the recall elections. Then, after Walker won the election, his top legislative priority for the next session was enacting a mining bill drafted by Gogebic Taconite.

During the heated debate over the controversial bill,Wisconsinites never knew about the secret $700,000 donation, which was 22 times greater than the roughly $32,000 that the mining company had disclosed in donations to Wisconsin candidates in 2011 and 2012.

Similarly, the public didn’t know that the CEO of Menards Hardware had secretly given $1.5 million to Wisconsin Club for Growth. Walker personally raised at least $1 million from Menard, which came in the form of a corporate check.

It was certainly advantageous for Walker to keep the identities of these donors a secret. That secrecy allowed his administration to push those donors’ agendas with minimal scrutiny from the press and public — and that was by design.

The Gilkes memo sets out for Walker some of the “red flags” associated with Simmons and other potential corporate donors “so you are aware of what you might need to defend in terms of contributions from donors when these are disclosed.”

Despite being subject to the looser rules that apply to “independent” political committees, the state Club for Growth was effectively indistinguishable from Walker’s campaign. Donors gave it at Walker’s request, wrote “Walker” in the subject line of their checks to WiCFG, and Walker then wrote thank-you notes to those donors — and pushed their agendas into law. Walker’s campaign consultant, R.J. Johnson, then apparently controlled how WiCFG spent the money secretly raised.

In fact, the documents reflect that Walker’s team viewed past independent spending efforts by groups like the US Chamber of Commerce and the Republican State Leadership Committee as being of limited value, according to a March 29, 2011 email from Johnson to Walker and Gilkes. So they hatched a plan to draw donors away from the RSLC and give directly to a constellation of groups that Johnson ultimately controlled. Because these groups were under the control of Walker’s campaign, they could guarantee that the spending was of maximum value to the campaign.

“I am more convinced than ever that we cannot put our fate in the hands of others,” Johnson wrote. “The only way to succeed is, as Reagan said, ‘trust but verify.’ Verification is we control the resources,” and to achieve this, Johnson declared, “the Governor will be raising 5 million plus under Wisconsin control.”

This vast coordination scheme — spurred by Johnson’s desire for “control” over the money spent in the state, and to keep donors to his plan hidden from the public — gave rise to the “John Doe” investigation into the Walker campaign, led by Republican and Democratic prosecutors with support from the state’s nonpartisan elections board.

The Wisconsin Supreme Court shut the investigation down, arguing that Walker’s involvement with the groups was legal because their efforts weren’t political: Their groups’ ads didn’t expressly state “vote for” or “vote against” a candidate. The absence of those magic words, the court held, made the ads “constitutionally protected” even though to most laypersons’ eyes they were unmistakably supporting Walker.

As we’ve previously observed, “For now, the Wisconsin example provides a sobering look at a deregulated campaign finance landscape: where voters are left in the dark, secret donors get special treatment and politicians and donors can flout the law and buy the judges they need to get away with it.”