Cue the free trade debate as Ford, like other US automakers, is going to Mexico in search of cheap labor 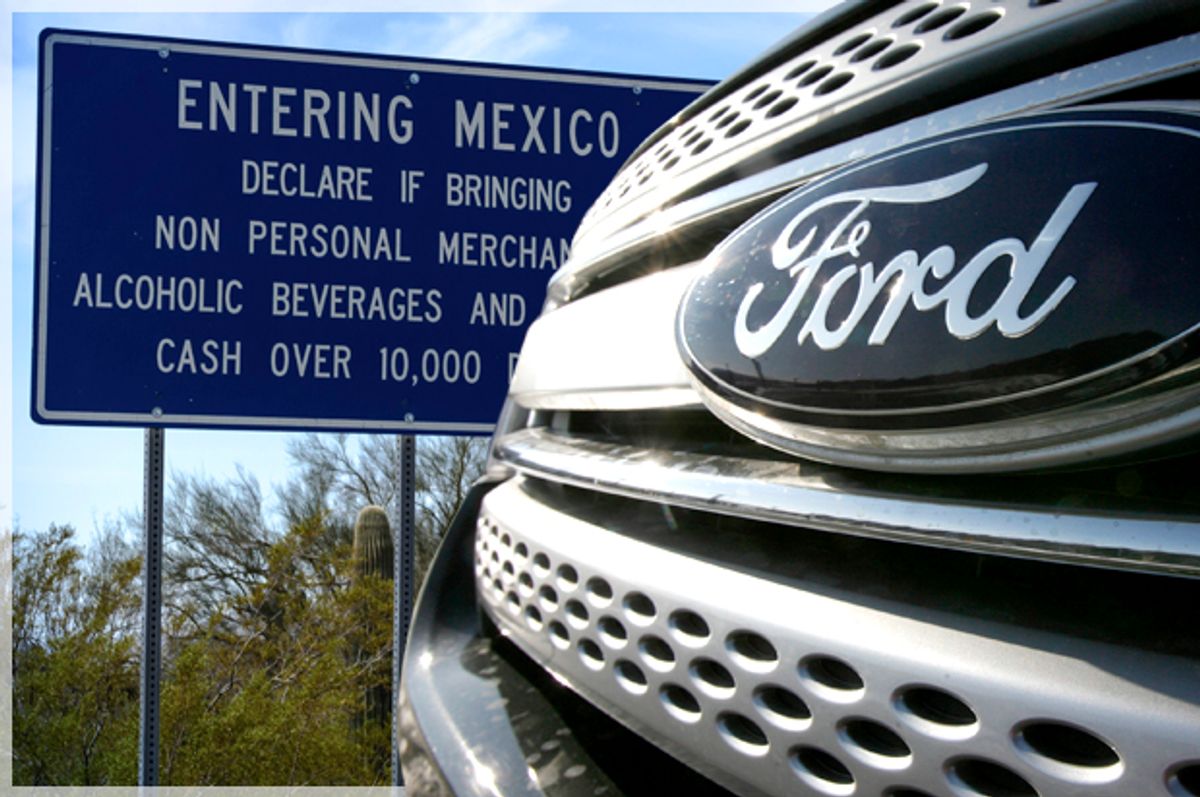 In speech after speech, Republican presidential nominee Donald Trump has decried companies sending jobs abroad to low-wage countries, calling it a profound betrayal of the American worker. And despite having profited from his Trump branded Chinese-made cufflinks and dress shirts woven in Bangladesh, the real estate mogul has pledged to crack down on labor outsourcing if elected.

But Trump’s threats have not discouraged American auto companies from setting up factories south of the U.S. and then sending finished vehicles north.

On Wednesday, Ford Motor Co. CEO Mark Fields announced further efforts to take advantage of Mexico’s low-cost labor force, telling investors at an event near Detroit that Ford would soon shift all  the company’s U.S. small-car production to Mexico by 2018.

The announcement elicited a harsh response from Trump. Speaking at an event in nearby Flint, Michigan, Trump called Ford’s decision “horrible” and continued his attack on Thursday, accusing the maker of F-150 pickups and Mustangs of plotting to fire all its U.S. factory workers. Ford fired back by pointing out that it now has in the U.S. 85,000 employees, a 50 percent rise over the past five years, while its Mexican workforce stands at 8,800.

“Our home is here,” said Ford spokeswoman Christine Baker. “We will be here forever."

Despite Trump’s efforts to make Ford a pariah of labor outsourcing, the automaker and its rivals have continued to pour billions of dollars of investment into Mexico, taking advantage of the country’s proximity to the U.S., its 44 free-trade agreements and, most important, its low-cost labor: hundreds of thousands of factory workers earning just a small fraction of what auto workers in America would.

Twenty-two years after the signing of the North American Free Trade Agreement, promises made by its proponents that the measure would narrow the wage gap between Mexicans and their northern partners haven’t been fulfilled. Mexican manufacturing wages are lower than they were a decade ago, and the number of Mexicans living below the poverty line has increased in recent years, according to the World Bank.

“Mexico is willing to maintain a policy of wage suppression,” Tony Payan, director of the Mexico Center at the Baker Institute for Public Policy at Rice University in Houston, told Salon. “The promise was that the advantage of Mexico’s lower labor costs would eventually disappear as Mexicans’ wages rose. That has not happened. The Mexican government continues to rely on having very, very cheap labor.”

Factory workers in Mexico earn a lot more than the country’s minimum daily wage of $3.50, pulling in roughly $8 to $10 an hour, including benefits, according to the U.S. Center for Automotive Research. But that’s far lower than the $16 to $19 an hour for the lowest paid U.S. autoworker.

The practice of Mexican companies’ keeping their wages relatively low has made the nation more competitive than other developing countries (especially China) and paid off, both in terms of foreign investment and job growth. According to the Mexican Association of Automobile Manufacturers, Mexico attracted $14.6 billion worth of investment from global automakers from 2012 to 2015, including $5 billion from General Motors in 2014, $2.5 billion from Ford last year and $1.36 billion of co-investment by Nissan and German auto giant Daimler in 2014.

And last year the number of auto industry jobs in Mexico rose to 675,000, an spike of 40 percent since 2008, according to the Center for Automotive Research. By next year, Mexico will overtake Canada next year as the largest vehicle exporter to the United States, according to market analyst IHS Markit. In 2014 Mexico displaced Japan as the No. 2 exporter to the U.S., a position the Asian country had held since the 1970s.

The news that Ford is shifting its small-car production to Mexico comes five months after the automaker announced plans to build a $1.6 billion small-car plant in the northern state of San Luis Potosí.

“Ford is putting production where it makes the most sense logistically, which is closer to where the demand is,” Rebecca Lindland, senior analyst for Kelley Blue Book, said in an email to Salon. “There is much more demand for small cars in Mexico and Latin America than there is in North America.”

But here's the thing about the move that's likely to get lost in the rhetoric: It won't cost any U.S. jobs. American workers affected by the shift of production to Mexico are being reassigned, Ford has said. Roughly 3,000 workers building the Focus and C-Max at Ford’s Wayne, Michigan, plant will be shifted to producing larger, more profitable vehicles. The company is expected to build the greatly anticipated new Ford Bronco SUV and Ranger small pickup in Wayne. Automakers including Fiat Chrysler and General Motors have also said they’re focusing U.S. production on higher-profit-margin trucks and SUVs while redirecting small-car production t0 Mexico.

So while American automakers aren’t abandoning the U.S., the world’s second-largest and most profitable car market, it’s also true that American manufacturing jobs now are paying less on average. Carmakers have also turned to a controversial two-tiered wage structure (including new workers who are paid less to do the same job as higher-paid ones) and increasingly relying on temporary employees who are easier to let go.

And as has been the case since the years just after NAFTA’s adoption, Mexico’s lower-wage, but equally skilled factory workers are ready for all the work the global auto industry can throw their way.