"The runway is dead — long live the runway!": Why fashion shows still matter

New York Fashion Week sparked talk about the end of runways shows, though rumors of their demise are exaggerated 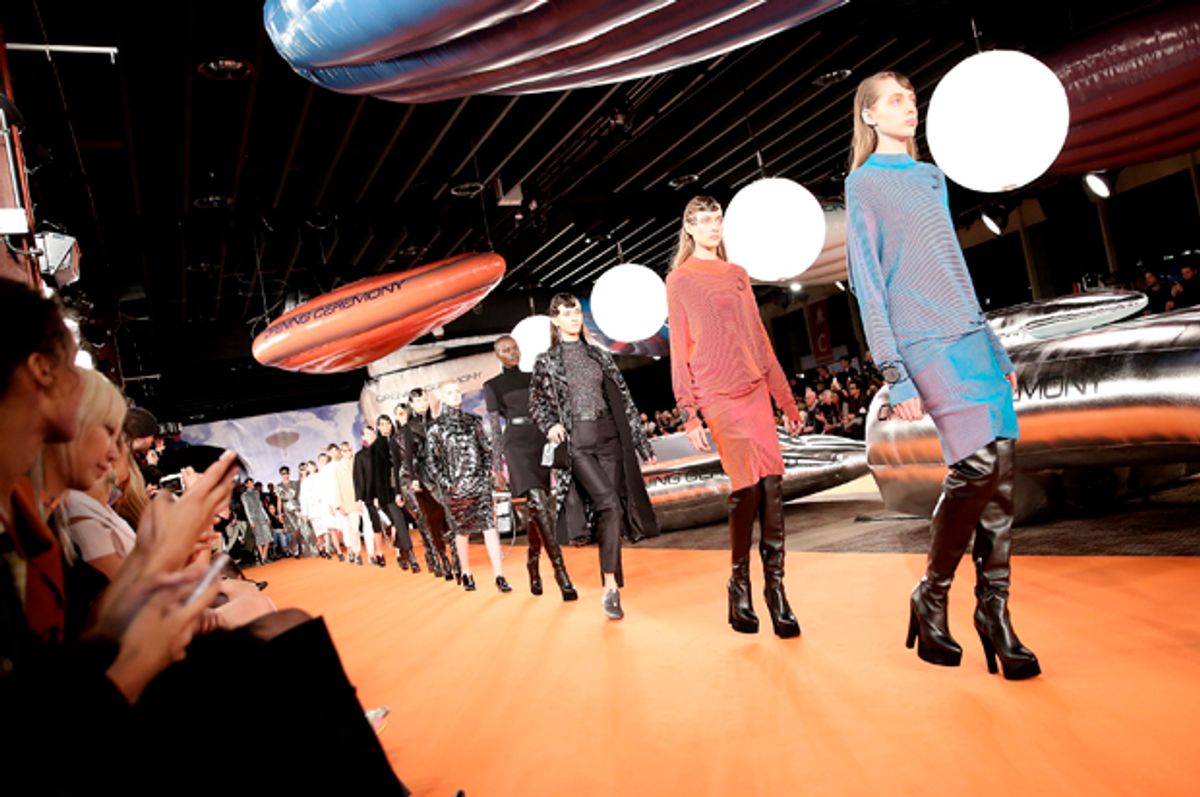 For starters, a number of notable names were missing from the calendar. Diane von Furstenberg, who generally throws one of the largest, and most celebrity-filled, shows of the week, instead held small private appointments to introduce buyers and press to her newly installed chief creative officer, Jonathan Saunders. Derek Lam, too, gave up his typical Sunday show slot in favor of small presentations at the Greenwich Hotel, telling Women's Wear Daily, “When there’s so much noise, and I don’t know really what way the fashion cycle will change, this is an opportunity to be centered and think more succinctly.” The young, ethically minded label Maiyet followed suit, while Misha Nonoo opted for a preview on Snapchat. And in lieu of a large presentation, Kate Spade released an online video to promote clothes currently for sale in stores.

Other fashion houses decided to shake up the format a little — or a lot. Tom Ford, who moved his show from London to New York this season, threw an elegant black-tie dinner for 160 guests, which attracted high-wattage star power in the forms of Tom Hanks, Julianne Moore and Jon Hamm. But what they saw from their round tables clustered around a makeshift runway in the space formerly known as the Four Seasons restaurant was not the collection that would hit stores next spring, but fall clothes that in fact appeared in his shop windows on Madison Avenue the very next morning. Ralph Lauren, who held his show outside his flagship store several blocks further up on Madison, made the consumer connection even more immediate, inviting guests to purchase the collection inside the store moments after taking his bow. Waiters stood invitingly before the handbag displays offering flutes of champagne.

Tommy Hilfiger went even bigger, and more mass, throwing a carnival complete with rides, a hot dog stand and temporary tattoo parlor that was partly open to the public — and he, too, made the collection shown available for purchase almost immediately afterwards. Opening Ceremony, which has been challenging the runway status quo for some seasons now, used its spot on the schedule to host an event that, with the help of “Portlandia” stars Carrie Brownstein and Fred Armisen, as well as a special appearance by Whoopi Goldberg, managed to nicely balance the showing of clothes with stand-up comedy and a call to vote in November.

Not since 1998, when Helmut Lang single-handedly moved New York Fashion Week from mid-October to early September, has showcase seen so much change. For decades, the event had a singular purpose: It brought together designers, buyers, press and other industry figures to preview the next season’s collections, allowing them to distinguish between the good and bad, and identify the major trends. But the advent of social media and fast fashion changed all that, prompting designers and the industry’s governing body, the CFDA, to question the raison d'être of runway shows: Is it still worth paying tens if not hundreds of thousands of dollars on these events when consumers must wait four to six months for those clothes to hit stores, by which point they’ve grown bored or forgotten about them, and far cheaper copies have already made their way into Forever 21 and Zara? Then, there's the difficulty of make each presentation feel unique: The similar nature of most runway shows makes it a struggle to stand out from one another — and tend to create nearly identical imagery that generally performs poorly on social media outlets like Instagram, making the investment even more questionable.

No one knows exactly what to do. So some designers experimented this season. Others saved a little cash.

Although Ford, Lauren and others drew headlines for the changes they made, the reality is that the mast majority of designers stayed with tradition — for them, a runway show (or in the case of many younger designers, a presentation with standing, rather than walking, models) remained as compelling as ever.

Ulla Johnson, whose 16-year-old eponymous label is carried by such major department stores as Barneys in New York and Selfridges in London, said that for her, having a presence at New York Fashion Week “is not just about the numbers.” “It’s wonderful to see clothes in context,” she told Salon, arguing that “things can be really divorced from the feeling [of a collection] when they’re just on the [sales floor].” In fact, she and her team are planning to invest in NYFW even further come February, upgrading from a presentation to a full-fledged runway show.

The Chilean-born designer Maria Cornejo, whose twice-yearly fashion shows consistently draw the industry’s top critics and editors as well as luminaries in the art world, told Salon that a runway show remains “the strongest way to let people know what you’re doing.” For her, the reasons are part creative, part commercial: “It’s about seeing it on different types of girls… [and] it’s the most effective way to get the sales people to see the exact same thing, to get the mood of it. At the end of the day, fashion, whatever it is, needs to be aspirational, not just clothes hanging on a rack.”

Indeed, there was something extra lovely about Johnson's and Cornejo’s shows this season, which offered a respite from the theatrics of the more headline-grabbing events so that one could really, truly focus on the clothes themselves. Dressed on the right model with the right hair and makeup, one could easily see how Johnson’s clothes channeled French cool-girl chic. Cornejo’s collection, rendered almost entirely in white, offered an opportunity to study her marvelous construction technique in detail.

And while many of these designers see the appeal of making a runway collection available for purchase directly after the show, that remains a financial and logistical impossibility for most. “We need the time to make the clothes, to make things beautiful, to make them properly,” said Cornejo. “We’re not making in China, or doing thousands of units — it’s a luxury product.”

For the foreseeable future, then, New York Fashion Week will remain in flux, with many more experiments — from hot dog stands to surprise point-of-purchase activations — to come. And that can be a very healthy thing. “The whole point of going a show is to get people to notice you, basically,” the designer Rebecca Taylor told Salon. She opted out of a show this season, but still believes they can be hugely beneficial, particularly for young designers. “It’s all about trying different things," Taylor said, "and seeing what works, there’s no rules at the moment, anything goes. At the very least, it should keep things fresh and interesting.”

And whatever the changes coming to New York Fashion Week in the seasons ahead, the 10 or so uninterrupted minutes during which designers present their visions to a captive audience will always have a place — particularly among those who truly love clothes.