Attack of the plastic eaters: Can mushrooms, bacteria and mealworms save the planet from pollution? 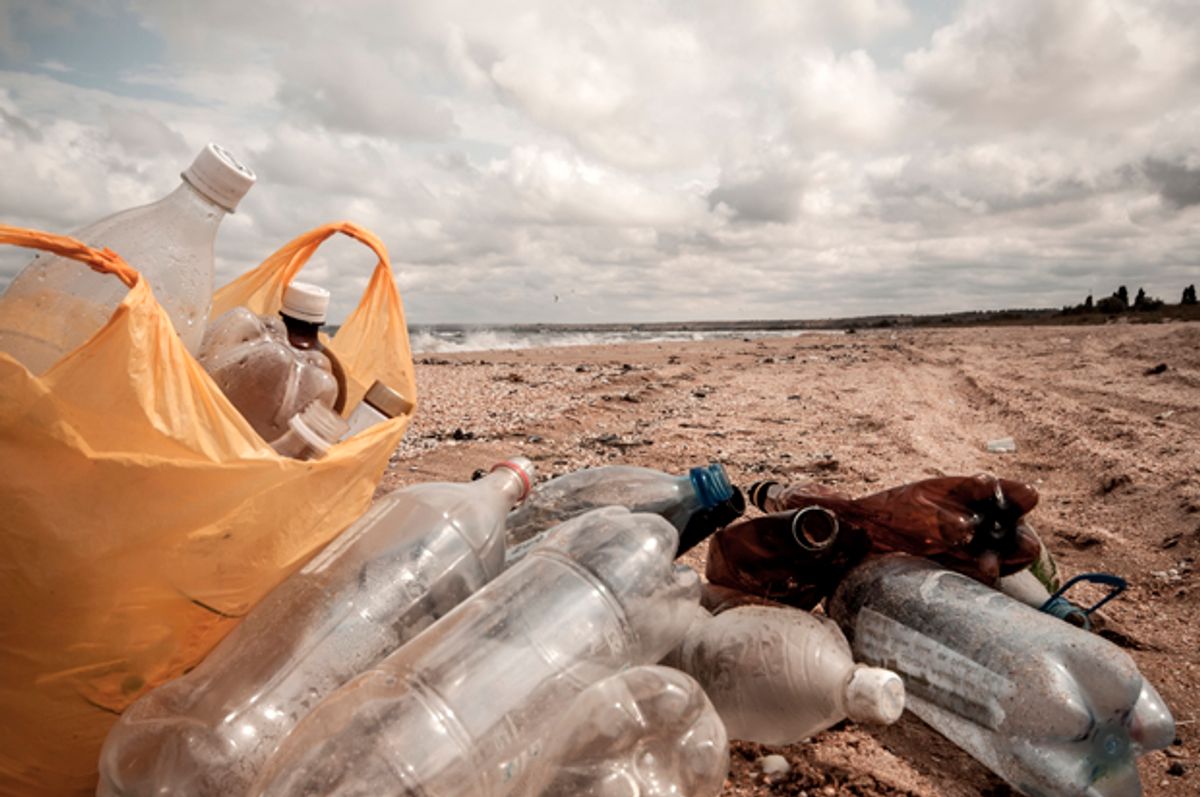 The colorless, threadlike tendrils expand slowly, on the lookout for unsuspecting prey. Gnarled and hungry, these twisting branches inject their targets with acidic, oozy secretions, and a chemical breakdown begins. The victims are left partially liquefied and easier to eat — or, more accurately, absorb.

This not the beginning of a horror movie — if anything, it's like a feel-good film for fans of the environment. The process here shows how a gang of fungi called “the decomposers” feed via complicated, often microscopic webs. Normally, organic plant matter is the prey in this compost-style consumption. But, as it turns out, a number of "the decomposers" can survive by feeding on plastic, which makes them, along with a handful of other plastic eaters, a possible secret weapon in the war against plastic waste.

As it turns out, nature might offer us the solution to our man-made problems. Scientists around the world are harnessing -- in test tubes, under glass domes, and within large bioreactors -- the power of living things that can digest plastic without suffering harm. Imagine a world where you can have your plastic and it gets eaten, too.

This research comes at a crucial time. Last year, researchers at UC Santa Barbara found that there may be as much as 12.7 million metric tons of plastic waste dumped into the world’s oceans annually. Marine species (those not equipped with plastic-digesting superpowers) are consuming it at an alarming rate, meaning plastic toxins are entering the food chain. And while the impact to human health is still being studied, the consensus among the scientific community is not looking good. Much of the plastic that doesn’t make it to the sea ends up in landfills, where it encroaches on available living space and leaches toxic compounds into groundwater. Each piece takes at least 450 years to decompose.

So the ocean and the planet are choked with plastic — what are we going to do about it? For students at Yale University in 2012, the "aha!" moment came in the Ecuadorian rainforest, during a study of mushrooms, or the visible flowers of a fungus web.

It’s likely these students already knew about the potential for mushrooms to clean up the planet -- mycologists and disaster experts have collaborated on a strategy for utilizing fungi to absorb radiation from the Fukushima nuclear reactor disaster. And dinner plate-sized mushrooms have been sopping up petroleum in the oil-ravaged Amazonian province of Sucumbíos since 2006. Now, the students have discovered a particular type of mushroom with the capability to not only digest plastic, but to subsist entirely off an all-plastic diet. Perhaps most encouraging, the Yale students realized this biodegradation can take place in an environment devoid of oxygen, like the bottom of a landfill. Since then, researchers have discovered several more shroom species that have this capability.

The breakthrough inspired Austrian designer/thinker/strategist Katharina Unger to develop, in conjunction with scientists at Utrecht University in the Netherlands, what she calls a Fungi Mutarium. In the prototype, underneath a small, transparent and humidity-controlled dome, Unger incubated two plastic-eating species: Oyster Mushrooms (which are sold at Whole Foods and already used in the breaking down of diapers) and Split Gill Mushrooms (popular in Mexico, Asia and Africa). A couple dozen mushrooms grow under the dome at a time, each in their own gelatinous, egg-shaped pod made of seaweed, which mimics a natural growing surface. Tiny pieces of plastic are sterilized by UV light and placed inside each pod via a pipette dispenser, and as the mushrooms grow, they feed on these strips, without retaining any of the chemical compounds in the plastic. This means that even after consuming plastic these mushrooms are safe for human consumption. Right now, plastic takes several months to biodegrade via this fungi-focused approach, but researchers are working on ways to speed up the process. Assuming this can be replicated on a much larger scale, the potential is great.

But the Yale study -- and the mushroom-growing dome it inspired -- created huge Internet buzz largely because “it’s a snazzy headline,” Melissa Duhaime, PhD, Assistant Research Scientist in Ecology and Evolutionary Biology with the University of Michigan, told Salon. “But as it happens right now, the rate is very slow, and it’s not a feasible pathway to answers for plastic pollution.”

Part of the problem is what Duhaime calls an “insurmountable” number of different plastic types, made of different polymers. The complexity of our plastic jungle makes it impossible to find one fungus that can handle them all. Scientists will need to manipulate the exact right community of fungi, and that’s one hell of a challenge -- like coordinating a huge dinner party for people with very specific dietary needs. Then, in order to make this an economically viable solution, we’ll need to genetically engineer this community to speed up its biodegrading process.

Still, it’s possible. This means you might one day see large facilities — similar in scale to wastewater treatment plants — set up for just this purpose. “That’s one option,” Duhaime said. “Another would be akin to a composting bin. Or maybe we create a big, plastic bioreactor. That’s not so crazy -- we might even be able to harvest energy from a bioreactor. But whether it’s cost efficient does not depend on science. There have to be cost incentives.”

When it comes to the scalability of plastic-eating organisms, it may be two 22-year-old scientists who have the answer. As undergraduate students at the University of Pennsylvania and University of Toronto, respectively, Miranda Wang and Jeanny Yao discovered that two strains of bacteria in Canada’s Fraser River are capable of breaking down plastic compounds called phthalates (the hormone-disrupting chemicals that make it uncool to microwave your food in Tupperware). However, because it takes these bacteria months to eat through a single small piece of plastic, the challenge became turning this discovery into an economically viable business solution. Now, the women think they’ve found it.

Wang and Yao, recent graduates and founders of seed-stage startup BioCellection, are coming to the end of their R&D phase, in which they’ve developed a proprietary and environmentally sustainable chemical process that converts plastic into a simpler form. In other words, they’re using chemistry to make our plastic trash more like a drive-through meal, and less like a seven-course chef’s tasting — bacteria will be able to eat it 80 percent faster.

“Our technology is going to answer the big question: Why should we clean up our plastic trash at all?” Wang told Salon. “Sure, it looks bad, and it’s dangerous, but why should we clean it up? We can answer that with a strong economic argument.”

The company already has three provisional patents, and they’ll be filing for a worldwide PCT patent in December. If all goes according to plan, by year five BioCellection will be able to remove 243 tons of plastic waste from the earth, which equates to more than 3,300 square feet of landfill space.

In the meantime, more bacteria strains may be evolving right now to digest plastic efficiently on their own, since plastic has become so ubiquitous in the environment. Scientists think this may have been the case for Ideonella sakaiensis 201-F6, a strain capable of completely biodegrading plastic water bottles, which was recently discovered by Japanese researchers. Now, there’s talk about the feasibility of spraying this bacteria over the top of our giant garbage patches at sea.

But while bacteria-centered research moves toward the water, other scientists are envisioning the potential for plastic-eating organisms to aid the agricultural industry. Take Professor Jun Yang of China’s Beihang University. In 2005, he felt excited by what most people would rather not see in their kitchen: worms. Specifically, he spotted the 2-centimeter larvae of the wax moth eating through a bag made of polyethylene plastic (this is the most common kind of plastic; think garbage bags and water bottles) to get to the grain inside. Research was conducted, and a paper confirming the ability of waxworms to safely digest plastic was published in 2014. But waxworms are difficult to work with -- it’s hard to control larvae with a penchant for flying away.

Yang and his colleague, senior researcher Wei-min Wu, PhD, at Stanford University, made the switch to happily-grounded mealworms -- the slightly larger larvae of the darkling beetle. They also shifted focus to a different kind of plastic: the dreaded Styrofoam.

What they discovered is that, due to special microbes in their gut, 100 mealworms can eat through 34 to 39 milligrams of Styrofoam in one day, which is only about the size of a small pill -- not exactly promising when you consider the scope of our plastic problem. But Wu says he can envision waste-conversion sites one day coming out of this research, where millions of mealworms are unleashed onto our plastic waste and allowed to feast. The larvae’s excrement can then be repurposed as soil for crops, since it’s free of plastic chemicals.

Because the researchers successfully isolated mealworms from their microbes, there’s hope of genetically engineering these strains -- i.e., souping them up to digest faster. It’s also possible larger animals, like bears and lions, might have a similar gut makeup, meaning research could soon move up the food chain. Imagine the king of the jungle safely feasting on hyenas, zebras and your Smart TV packaging.

The scientists are quick to remind us they aren’t the original pioneers. That title goes to a teenaged Chinese girl, Chen Cong-Guang, who made plastic-eating mealworms the focus of her high school science fair project in 2003. But, as school science projects often do, it flew under the radar. Even if they’d known about it, the scientific community would have likely dismissed the findings as implausible.

“Research on plastic degradation has been conducted since the 1970s around the world, including in the U.S.,” Wu told Salon. “The previous conclusion was that most kinds of plastic are not biodegradable or extremely poorly degraded. We have just changed the common wisdom.”

All of this begs the question: How far are scientists (and corporate investors) willing to go? If other organisms are coping with plastic pollution in their environment by evolving to digest it, isn’t it possible humans could evolve the same way? After all, we’re already consuming plastic -- could our bodies adapt to do it more efficiently, and without negative health implications?

“I don’t know if humans will evolve to have this ability,” Enzo Palombo, PhD, Chair of the Department of Chemistry and Biotechnology at Australia’s Swinburne University, told Salon. “but we might be able to modify our gut microbiome to introduce some of the species that naturally eat plastic.” Ready to take these next-generation probiotics?