Do you suffer from Election Stress Disorder? Your campaign obsession is part of a psychological epidemic — and it may be hurting your health

Political anxiety and fear used to be a health problem only in the developing world — now it's rampant in the U.S. 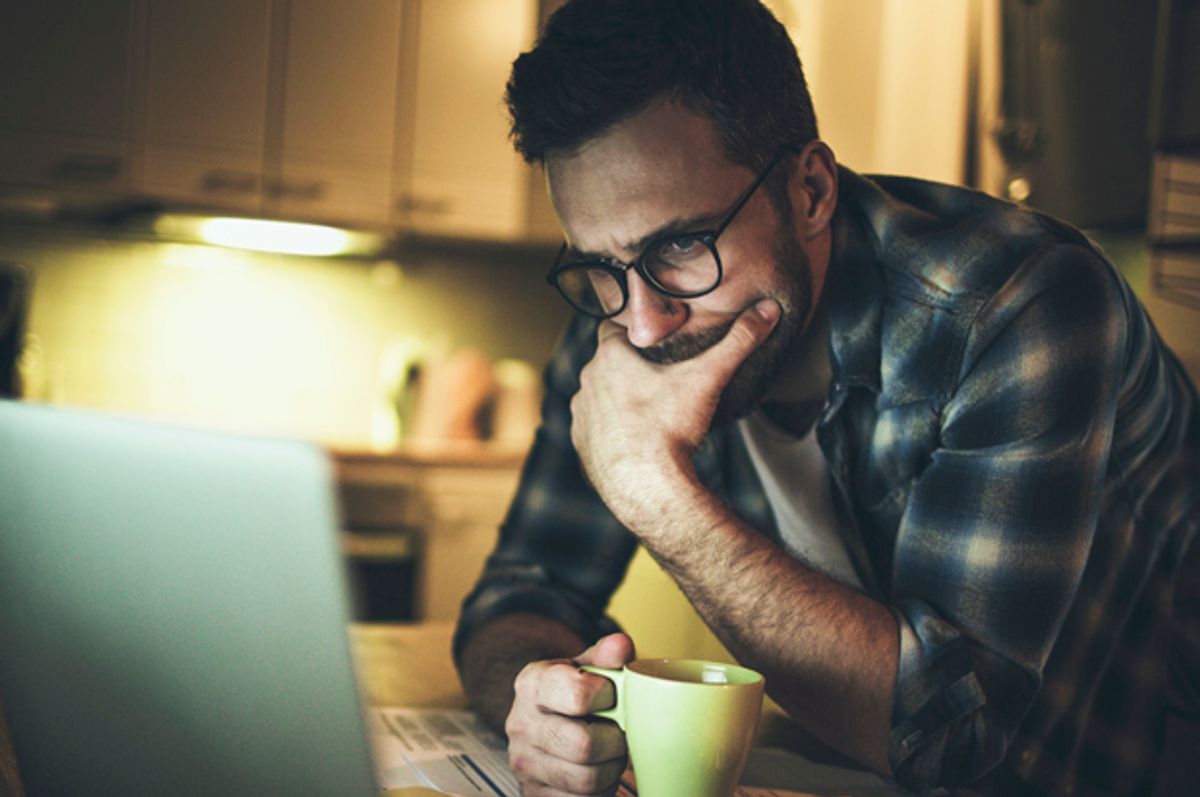 We all know the old adage: "Don’t discuss politics, sex or religion and everyone will get along just fine." That may work for sex and religion, but with political stakes — and antics — consuming the news cycle and our psyches like never before, it seems that election anxiety might have gone from an unpleasant dinner topic to a legitimate psychological disorder.

Steven Stosny, Ph.D, author of "Soar Above: How to Use the Most Profound Part of Your Brain Under Any Kind of Stress," recently identified a phenomenon he dubbed “Election Stress Disorder” in Psychology Today. As Stosny told Salon: “This election appeals more to the toddler brain — emotional, all-or-nothing thinking — with more of the toddler coping mechanisms: blame, denial, and avoidance. The body can’t distinguish kinds of stress very well, especially when blame, denial, and avoidance are used as coping mechanisms. If you get peeved at something a candidate says, you’ll tend to look for oversimplified solutions at work, drink more, drive more aggressively, and suffer the physiological and mental effects of general stress.”

Stosny isn’t the only clinician who sees cause for concern. Stephen Holland, the director of the the Capital Institute of Cognitive Therapy in Washington, D.C., recently told The Atlantic that “probably two-thirds to three-quarters of our patients are mentioning their feelings about the election in session.” For many, those feelings are related to one candidate in particular: a Washington Post/ABC News poll conducted last January found that the idea of “President Trump” made 69 percent of voters anxious (Hillary Clinton stressed out about 50 percent of voters). The Post also reported that everyone from therapists to masseuses were seeing clients who complained of “Trump Anxiety.” The fear of a Trump White House has even led some couples to reconsider their marriages. Kristin Kunkle, an instructor of medical psychology at the Columbia University Clinic for Anxiety and Related Disorders, says that “in general I have noticed growing stress about the election, both with my patients and with people in my personal life. In general, the most common reaction to this kind of uncertainty is generalized anxiety, which involves worry about the future, and symptoms like restlessness, irritability, muscle tension, fatigue, concentration difficulties, or sleep difficulties. It is worth noting that people with higher levels of generalized anxiety also typically have a range of worries — not just about the election — but election years may bring on additional worry.”

Experts point to the prolonged election cycle (a year and a half in the U.S. — significantly longer than in countries like Canada or the U.K, where campaigning typically lasts only a few months) as a major culprit, with sensationalized media stories, social media vitriol and an unceasing barrage of bite-sized news clips contributing to the anxiety. Stosny suggests that the rise of the 24-hour news cycle means modern politicians are constantly competing with cable television personalities and the online hive mind for the public’s attention, and the resulting hyperbolism creates a flood of adrenaline and exaggeration that more closely resembles a reality show than informed debate. Watch the news and see the same story repeated ad nauseam by well-coiffed talking heads; try to escape to social media and find your feed flooded with endless retweets of every inflammatory statement, creating a feedback loop that leaves voters feeling more anxious than informed.

Stress caused by election fatigue isn’t a new, or even uniquely American phenomenon — most previous documented cases come from politically unstable developing countries. In Thailand during a 2014 military coup and resulting social media controversy, the Public Health Ministry warned citizens that consuming too much news media could be harmful to mental health, saying, “People at risk of such stress are advised to follow only the news from state-run news... if one feels stressed, has difficulty sleeping, has a headache or becomes easily irritated, he/she should consult the stress clinic at public health establishments or call the Mental Health Department's hotline." A study done in the Indian state of Rajasthan on patients who visited a clinic “after developing psychiatric illness following panchayat [local] elections” found that “election stress has its impact not only on candidates contesting but also on others involved in the process and general population.”

It’s clear that all this stress is not only taking a demonstrable toll on the public’s well-being, but it could also affect the election itself. A 2014 study published in the journal Physiology and Behavior found that individuals with higher concentrations of the stress hormone cortisol were actually less likely to vote (regardless of which party they supported) — which means those experiencing severe anxiety over a Trump presidency might actually help make it a reality if they don’t make it out to the polls.

So, is there any remedy for Election Stress Syndrome? Stosny recommends voters try to shift to the adult brain and “hold other people’s perspectives alongside your own. Weigh evidence, see nuance, plan for the future and replace blame, denial, and avoidance with appreciation of complexity.” Of course, that won't stop a large number of people from obsessively Googling “how to move to Canada.”