Though different in tone and execution, "High Maintenance" and "Mary + Jane" depict the ordinariness of pot use 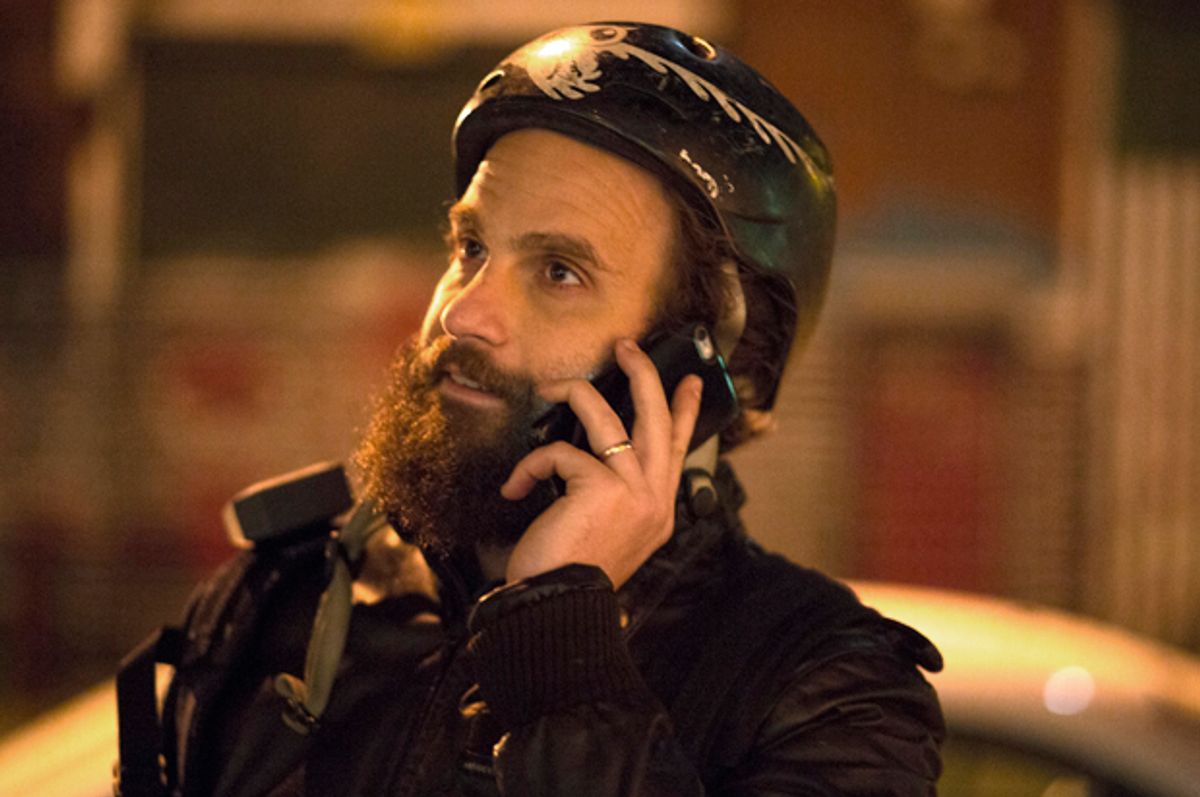 California is one of five states voting on the legalization of marijuana for recreational use in November, and if the predictions are correct, The Golden State will go green. Should that happen, casual tokers may give thanks not only to lobbyists who put in decades-worth of work, but to Hollywood — and television, specifically.

Saying that probably harshes the mellow of countless Cheech and Chong admirers, Harold and Kumar devotees and Seth Rogen worshippers. That’s understandable; the cinematic stoner comedy has long played an important role in selling mainstream America on the idea that pot is more harmless than other illegal substances, and that the worst side effects can be an epic case of the munchies.

The target audience of those comedies has already been converted to the cause, though. Television, on the other hand, has steadily done its part to demystify cannabis and destigmatize its users with much broader audiences. In 1997, Murphy Brown procured medical marijuana to cope with the side of effects of her cancer treatments. The kids on “That ’70s Show” smoked out in Eric Foreman’s basement on a regular basis, although we never actually saw or heard the bubbling of a bong.

Marshall, Lily, Robin and Ted were known to enjoy the occasional “sandwich” on “How I Met Your Mother,” one of the top-rated comedies on television for a time. “Sex and the City” viewers watched Samantha toke up frequently and without apology.

These are but a few of the characters and shows that helped lay the groundwork for “High Maintenance,” the popular Vimeo web series that made its HBO debut at 11 p.m. on Friday and MTV’s “Mary + Jane,” airing 10 p.m. Mondays on MTV. And their approaches could not be more different.

Where “High Maintenance” is for the person who leads a productive, probably average existence occasionally assisted by a bowl of bud, “Mary + Jane” is an adorable sales pitch for marijuana brought to us by a pair of 20-something white girls who don’t look like stickup kids.

“Mary + Jane” serves as a reminder of the unbalanced portrayal of pot smoking on television — when white girls do it, it’s silly and harmless and a sign of a free-spirited nature. Hispanic and black women can’t get away with that. This was one of the uncomfortable undercurrents in Showtime’s “Weeds,” which had Mary-Louise Parker’s suburban housewife seem edgy and brave by going into business with African-American dealers.

And that tiresome concept continues to play on MTV: The idea of having a sweet blonde or a sexpot brunette deliver weed to your door is somehow more palatable than, say, a character who could be an extra on FX’s “Atlanta.”

“High Maintenance,” in contrast, welcomes many more smokers and cultures under its tent and spends more time with the buyers as opposed to the dealer, known only as The Guy (Ben Sinclair, who co-created the series with his wife Katja Blichfeld).

One quality shared by both series is that their scripts defy the classic depiction of marijuana users as slovenly, sleepy-eyed simpletons searching for the answers to the universe’s mysteries under their fingernails. Sinclair and Blichfeld expressly made it a point to contradict that stereotype, in fact; their central mandate is to show cannabis use as a mundane part of life, serving a variety of purposes in a multitude of settings.

Sinclair’s The Guy is a tall, thin, shaggy bicyclist who deliver edibles, flowers and vape cartridges to customers living all over New York City.

In some ways, “High Maintenance” feels like a fictionalized version of someone “Weediquette” host Krishna Andavolu might profile on his Viceland docuseries. The Guy sells to older men and women, and to hipsters; his clientele includes extroverts and shut-ins alike. In playing The Guy, Sinclair meets our expectations of what we’d expect a weed dealer to look like, while dispelling the characteristics that come along with those visuals. He’s a patient, non-judgmental man who may tire of the hustle but loves the free-wheeling oddity of New York and New Yorkers.

His gentle nature leads some of his customers to project a level of intimacy upon him that is utterly uncomfortable to witness. But he quickly earns the viewer’s affection.

The Guy’s ability to take us into the apartments of a wide variety of strangers also enables “High Maintenance” to explore a few of the more colorful stories hiding in a city of millions. As connects go, he’s high-grade.

Over the course of HBO’s six-episode season of “High Maintenance,” we spend time with a pair of toxic friends as well as slide into the world of a Muslim college student hiding her very American rebellious side from traditional parents. Riding along with The Guy grants us access to the world of day raves and polyamory pods, and inside the life of a social media queen.

That’s part of the reason the show’s stories and characters feel honest and familiar; even if you don’t smoke, you probably know people who are just like The Guy’s customers. You may even recognize yourself in one of those people. Thus, when a customer treats The Guy like a therapist, a single-serving friend, or a dirty servant, flinching is a perfectly understandable reaction.

“High Maintenance” is at its best when it expands beyond simple portraiture and zeroes in on human behavior. One story is quite interesting in that its central characters don’t directly connect with The Guy. But, like his customers, one of them hides his love of a pleasurable activity out of a self-imposed notion of propriety and shame. The activity in question is perfectly legal, and to go into specifics would ruin the surprise. But it also makes one wonder: Why do we impose limits on our joy, particularly in aspects of our lives that have the smallest stakes?

An alluring quality of “High Maintenance” on Vimeo was the way that its bootstrapped grittiness pervaded its dialogue and even the cinematography. As the project progressed, the execution became more polished even though its distinctive flavor remained intact.

Previous episodes of “High Maintenance” are available on HBO’s streaming services, and if you choose to watch — which you absolutely should — you may recognize a few rising stars, including “Orange Is the New Black’s” Yael Stone and “You’re the Worst’s” Kether Donohue. The series has lost nothing in its move to HBO, and actually expands some of the best stories and characters introduced in past seasons.

If there’s a quibble to be made with “High Maintenance,” it is that the majority of The Guy’s customers are members of the same socio-economic class as the average HBO customer. In terms of cultural inclusion, the world of “High Maintenance” looks much more like New York City than “Girls” does, and far more realistic than the Los Angeles we see in “Mary + Jane.”

“Mary + Jane” capitalizes on the classic sitcom odd-couple dynamic, pairing a nice-girl blonde named Paige (Jessica Rothe) with a naughty brunette, Jordan (Scout Durwood). Paige was a lifestyle blogger and budding event planner who put her dreams on hold when her bisexual bestie Jordan needed help to get her weed delivery business up and going.

Their adventures are typical of L.A. twentysomethings, in that they’re angling for fame and navigating the usual assortment of urbanite concerns, such as an old pal biting their business or competing lovers cramping their style. Actually, there’s really nothing special about Paige and Jordan, or “Mary + Jane,” which may not bode well for its long-term survival odds.

The objective of the series may not be to rival the longevity of “Friends,” or even “Weeds.” Maybe all it has to do is run beyond the November election. You see, although “Mary + Jane” was co-created by Deborah Kaplan and Harry Elfont, Snoop Dogg and his longtime manager Ted Chung, who co-founded the cannabis-centric media site Merry Jane with the hip-hop star, serve as executive producers. Snoop also has his own cannabis product line called Leafs by Snoop.

So with “Mary + Jane,” Snoop and Chung could be following the same marketing plan employed by Mattel with G.I. Joe. Except instead of kids playing with action-figure versions of their favorite cartoon characters, trade in those toys for dabs and vape pens. If legalization passes in California, picture young adults smoking the same strains of cannabis that Mary, Jane and their customers are enjoying in each episode. You’d have a tough time finding a more inspired example of smoking synergy.

The unimaginative execution of “Mary + Jane” makes its effectiveness as a product placement vehicle a bit dubious, however. No worries; more weed-themed series are on their way, including a sitcom that Chuck Lorre and Kathy Bates are doing for Netflix, “Disjointed,” and a drama titled “Humboldt,” which has John Malkovich attached to star.

Snoop Dogg is also filming “Martha and Snoop's Dinner Party,” in which he and America’s top domesticity expert host various celebrity guests. While Snoop would neither confirm nor deny getting baked with Stewart on the show, that there’s even a chance that we may see that happen on television truly makes these the highest of times.