Emmy Awards catch up to fans: Finally, Academy voters are watching the same shows we are

Some of the usual suspects won, but this year's Emmys had some welcome surprises, and an able host in Jimmy Kimmel 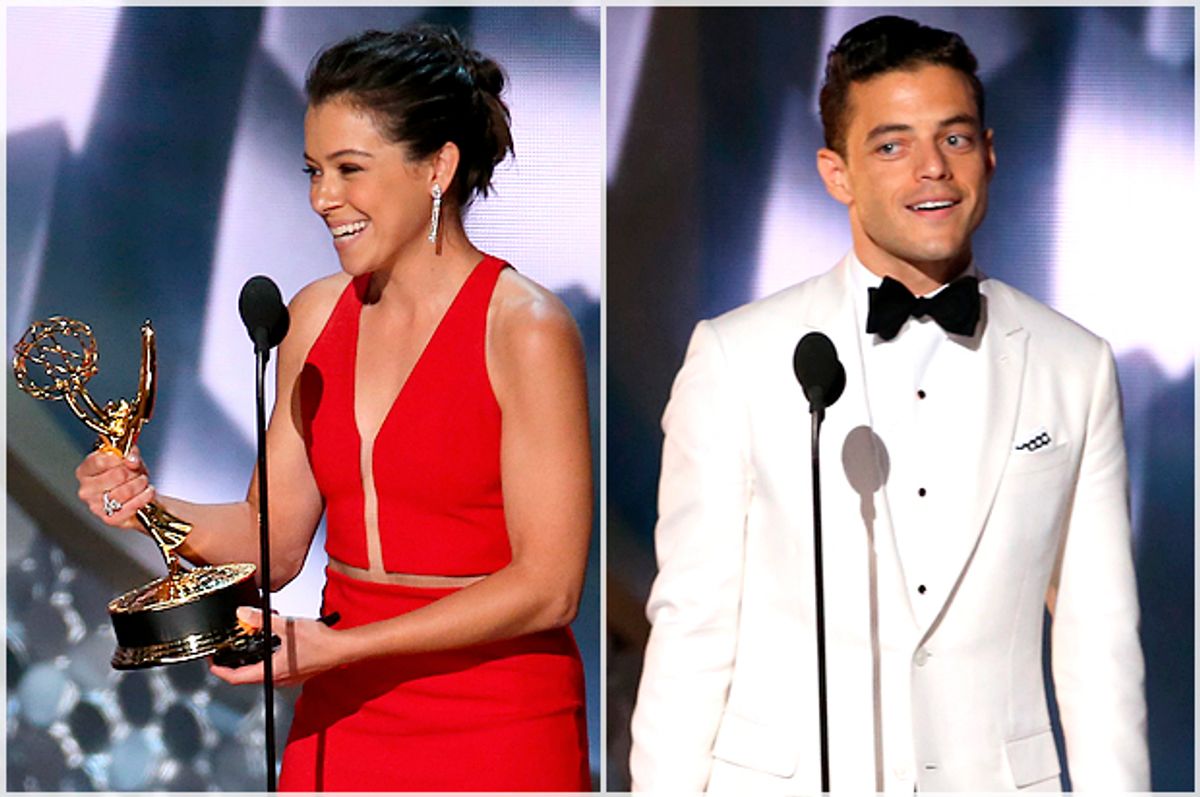 In many ways, the Platinum Age of Television has more than compensated for the shortcomings of cinema. Writers have shattered the medium’s constructs and reconsidered the definitions of genres. Actors and actresses who made names for themselves in the theatrical realms have crossed over to the smaller screen, happy to dig into longform storytelling.

It follows, then, that in response to the #OscarsSoWhite controversy that bleached out this year’s Academy Awards, the 68th Primetime Emmy Awards, broadcast Sunday night on ABC, would celebrate diversity in all of its facets. This idea applies to performers of color and women who enjoyed the widest, highest recognition the TV industry offers.

The event even got a catchphrase in “Transparent” creator Jill Soloway's acceptance speech: “Topple the patriarchy!”

Soloway, a winner for Outstanding Directing for a Comedy Series for her work on Amazon’s “Transparent,” was one of two female directors who took home Emmys on Sunday. Susanne Bier won for her work on AMC’s limited series “The Night Manager.” Their victories alone won’t do much to implode the industry machine, but maybe in a small way they represent a start.

Certainly this Emmys telecast was one of most exciting to view in recent memory, owing much to host Jimmy Kimmel’s playful deadpan style.  “If your show doesn’t have a dragon or a Bronco in it, go home now,” he said during his nimble opening dialogue.

More than once, Kimmel took chances and aimed for the kill, though he didn’t alienate anyone when he did so. Another brilliant bit exemplified this when the chipper Emmy announcer introduced “Dr. Bill Cosby” as a presenter. The camera panned across bemused faces in the audience before Kimmel strolled onstage. “Don't worry, he's not really here, I just wanted to see what you guys would do.”

Wielding his Everyman insider shtick as comfortably as he does on “Jimmy Kimmel Live!”, Kimmel’s even-keeled demeanor lent a relaxed accessibility to the festivities starting with a filmed opener that could have been titled “Comedian in Cars with Calamities”. The segment began with the host starring in a version of O.J. Simpson’s slow-motion Bronco chase, before Kimmel jumped into a van with “Modern Family’s” Dunphys. He then hitched a ride with CBS’s “Late Late Show” host James Corden, resulting in a carpool karaoke bit and a quirky re-enactment of Wham!’s “Wake Me Up Before You Go-Go” video, wigs and all.

Who brought Jimmy home? None other than Uber driver Jeb Bush. Surprise! (Also…wow, Jeb. Evidently that exclamation point has left the building.)

Bush’s appearance was one of several unannounced cameos. Another that featured Matt Damon stretched out a tad too long but was still more enjoyable than not. In any event, Kimmel’s unwavering dedication to keeping things moving resulted in an upbeat telecast that ended early but felt full, helped by a hosting style that was brisk and edgy but never unkind. Even when Kimmel strolled up to Emmy winner Sarah Paulson’s date, former L.A. country prosecutor Marcia Clark, and observed, “This must be very strange for you. Are you rooting for OJ to win this time?” Clark seemed to appreciate the joke.

The miniseries could not unseat “Game of Thrones” from the top of the pile, however. The HBO epic netted 12 Emmys, walking away with enough hardware to set a new record: “Thrones” has now won more Emmys than any primetime television series in history, with 38 under its belt and counting.

Truly Sunday night gave nerds of all stripes reason to cheer, with USA’s “Mr. Robot” star Rami Malek winning Outstanding Actor in a Drama, and Tatiana Maslany, a bit of a dark horse pick, garnering Outstanding Lead Actress and giving BBC America’s “Orphan Black” its first Emmy. That Louie Anderson unexpectedly won Outstanding Supporting Actor in a Comedy for his work in FX’s “Baskets” also was stupendous. Kate McKinnon’s first win in the Outstanding Supporting Actress in a Comedy category will be remembered for her honest tears and heartfelt thanks to Hillary Clinton and Ellen DeGeneres, two inspirations for the impressions that got her to that podium.

Maybe the Television Academy voters are watching the same shows we are, at long last! If so, they seem to be better attuned to the world outside the Hollywood bubble that past shows indicate.

Sunday’s Emmys gave us Malek, an Egyptian-American, breaking into ranks largely populated by white males and taking home one of the top individual prizes, alongside Brown and Vance. “Please tell me you’re seeing this too,” Malek said as he accepted, calling upon a memorable line from his series to put his awe into words.

Elsewhere Aziz Ansari and Alan Yang won a Writing Emmy for the excellent “Masters of None” episode “Parents,” one of the best half hours Netflix has produced to date.  And when Comedy Central’s “Key & Peele” claimed the Emmy for Outstanding Variety Sketch Series, it was impossible to refrain from engaging in excessive celebration.

All told there wasn’t much to be upset about on that winners list. Yes, “Transparent’s” Jeffrey Tambor nabbed another Emmy for Lead Actor in a Comedy as expected, because his portrayal of a transgendered woman on the Amazon series stands above just any other individual’s on television, comedy or drama. (“Transparent was born a drama, but identifies as a comedy,” Kimmel quipped.)

Yes, HBO’s “Veep” and “Game of Thrones” repeated victories in the top Comedy and Drama categories, and Julia Louis-Dreyfus won Lead Actress in a Comedy yet again, clinching with a speech that balanced razor-sharp political comedy with the devastating news that her father had passed away on Friday. Anyone who has doubts about that woman’s skills would marvel at her ability to maintain her composure. “Veep” may be an awards show favorite, but as Louis-Dreyfus proves, there’s a reason for that.

In spite of all of this greatness, a few things didn’t quite work out. You can blame the voters in some cases, such as Dame Maggie Smith’s baffling victory (again!) for the finale season of “Downton Abbey” on PBS, inexplicably beating several worthy contenders in the Outstanding Supporting Actress in a Drama race. Even Smith didn’t deign to show up for that nonsense. The Emmy repeat for NBC’s “The Voice” in Outstanding Reality Series felt similarly lazy, though that win had less of a sting.

Other upsets were simply bizarre. Honestly, even “Sherlock” most dedicated viewers on PBS must have been shocked to witness its win over HBO’s “All the Way” in the Outstanding Made for TV Movie category. Surely that announcement dislocated many jaws at HBO’s headquarters, since the premium channel has had a lock on the made-for category for eons.

The Emmy production itself also wrestled with a few flaws, including a flimsy bit in which the “Stranger Things” kids handed out peanut butter and jelly sandwiches to the stars. Food bits rarely work on awards shows, regardless of how enamored we are at who’s doing the serving. Where that went on too long, ABC’s pre-commercial teases featuring presenters struggling to have their lines heard over distracting background clamor should have been flat-out abandoned.

And lest we forget, this joyous industry fest rewarded the finest work in television during a season in which, according to a study released by San Diego State University's Center for the Study of Women in Television and Film, some ninety-one percent of series lacked female directors and 71% hired no female writers.  It also marks the opening of a season in which inclusion is still a concept waiting to be adopted in front of and behind cameras, and one broadcast network has no lead characters of color in any of its new primetime shows.

Perhaps that’s why Kimmel’s observation, "Here in Hollywood, the only thing we value more than diversity is congratulating ourselves for valuing diversity," landed so fiercely with the audience. It’s funny because it’s so not true!

Overall, though, the 68th Emmys telecast was a more a symphony of praise-worthy moments than dissonance, and the producers’ awareness of the show’s tone-setting power was apparent. Dedications to late greats Garry Shandling and Gary Marshall were appropriately poignant, and the rest of In Memoriam segment brought home, painfully, how many talented people death has stolen from us in 2016.

Additional kudos to the writers who wove in an opportunity for “Saturday Night Live’s” Leslie Jones to reclaim her image and dignity with humor by having her appear with the accountants responsible for keeping the night’s results safe.  "I just wanted to feel beautiful, y'all,” she told her industry colleagues. “Can a sista feel beautiful?"

Ebullient as Jones was, her presence on a night focused on how far TV has progressed reminded viewers of how far it, and the society it reflects, still have to go. Funny and defiant, she added a tinge of sobriety to a terrific evening for people who love television, and she went a long way in helping make the 68th Emmys telecast a bit less boring for everyone else.