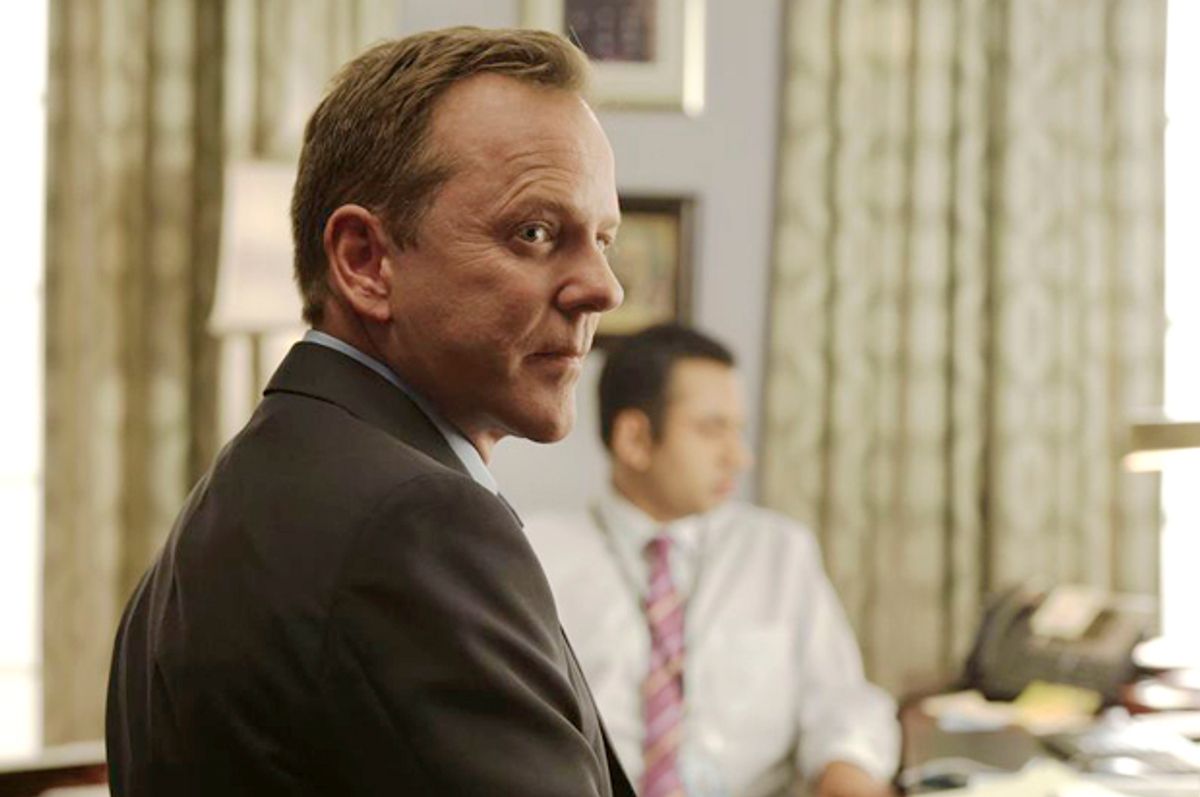 ABC’s “Designated Survivor” begins with an act of terror that, for voters fed up with a gridlocked Congress and incestuous politics, offers a fantastic and brutal reset. As Kiefer Sutherland’s character Tom Kirkman is drinking beer and watching the State of the Union, the seat of America’s government is suddenly annihilated. The president, vice president and many of the nation’s most powerful political figures have been blasted off the face of the Earth and, just like that, leadership falls into his quivering hands.

This would have kicked the unstoppable Jack Bauer of “24” into action. Agent Bauer, Sutherland’s most famous role, is a man who runs toward explosions and not away from them. He had the president on speed dial. Contrast that with Kirkman, a bespectacled man who can’t even get an invite to the State of the Union address. Instead, he is named the “designated survivor,” the Cabinet member low enough not to be missed during the president’s major speech but close enough to the heart of power that he can assume the duties of commander in chief should calamity strike. Which never happens . . . right?

By now, meeting Sutherland’s characters on the worst days of their lives is a familiar gig. This one is remarkably awful for Kirkman, given that it begins with his being fired from his rather thankless position as the secretary of housing and urban development. A few hours later, his first act as president is to be briefed on the attack in the situation room. His second is to excuse himself so he can vomit. (Yet another point of contrast with Jack Bauer: We never saw that man enter a bathroom.)

The giant shadow that Sutherland’s past work casts over the TV-thriller genre can make watching “Designated Survivor,” premiering at 10 p.m. on Wednesday on ABC, a strangely meta experience. Indeed, the opening four minutes feel like an alternate version of Agent Bauer’s life, one where he went to Cornell, married an attorney named Alex (Natascha McElhone) and cranked out a couple of beautiful children, neither of whom were ever hunted by a cougar.

Remembering the way in which Sutherland used to roar at villains each week, it’s odd to see him in the gentler guise of a morally upright man who looks downright uncomfortable sitting at the head of a powerful table, surrounded by solemn suits and military might while he’s stuck in his ratty college hoodie.

Created and executive produced by David Guggenheim, “Designated Survivor” is completely unrelated to “24,” of course, and most people can distinguish one fiction from another. But a viewer can’t be blamed for making the comparison. The memory of Sutherland’s longest-running role also makes watching him channel waves of uncertainty into Kirkman uniquely satisfying. Sometimes we forget that the actors inside of pop-culture icons can access a variety of emotional shades. Sometimes, too, it helps for them to show us the difference between an action heavy and a character who is as far from superhuman as they come but who can be heroic nevertheless.

“Designated Survivor” is a prescient drama, debuting very near to the presidential election, not to mention an election informed by deep rancor rooted in fear and powerlessness. Voters claim to want an inexperienced outsider not beholden to corporations or all-powerful lobbies; here, we’re given a particularly violent birth to the populist president whom so many claim to desire.

The president of “Designated” is a true unknown, plucked from the world of academia. Having never been elected to office or made any questionable alliances, he’s a clean slate.  But he’s never drawn blood either since he hasn't fought his way through the political ranks. This makes him highly vulnerable.

That Kirkman’s main adversary is a military hawk, Harris Cochrane (Kevin R. McNally), hints at some might-over-right debates and accompanying power struggles in future episodes, and it’ll be interesting to see what kind of leadership will be forged in such a crucible. Problems are going to arise that Kirkman can’t simply punch or shoot his way out of, even if obstinate policymakers and backroom deal-makers will no doubt make us want to see him do so. He’ll need to call on logic, diplomatic skill and pure guts, all of which can be thrilling to watch in the hands of a compelling performer of Sutherland’s caliber.

Adjunct to all this chaos is the realization that as “Designated Survivor” progresses, Kirkman is journeying into a political landscape littered with unknowns. The bitterly partisan Congress, a number of the joint chiefs of staff —they’re all gone. It is literally a dawning era in D.C., and that notion creates endless story possibilities.

As such, the alternate universe of “Designated Survivor” doesn’t instantly provide the kind of inspiration and comfort that Josiah Bartlet’s fictional presidency on “The West Wing” gave to half of America during the George W. Bush administration. Nor for that matter does Kirkman, a loyal family man, hold an eighth of the sex appeal of “Scandal” POTUS Fitzgerald Grant.

But the fact that he reacts to being thrust into the world’s most powerful leadership position with a mixture of fear, doubt and a determination makes Kirkman an appealing figure, refreshingly normal and fascinating to watch. No matter who wins in November, we’re betting that “Designated Survivor” will accomplish what real-world politics couldn’t: uniting a broad swath of Americans behind the idea of this drama’s fictional leadership.