Exclusive: Rep. Lieu tells Salon "There is now overwhelming evidence that war crimes are being committed in Yemen" 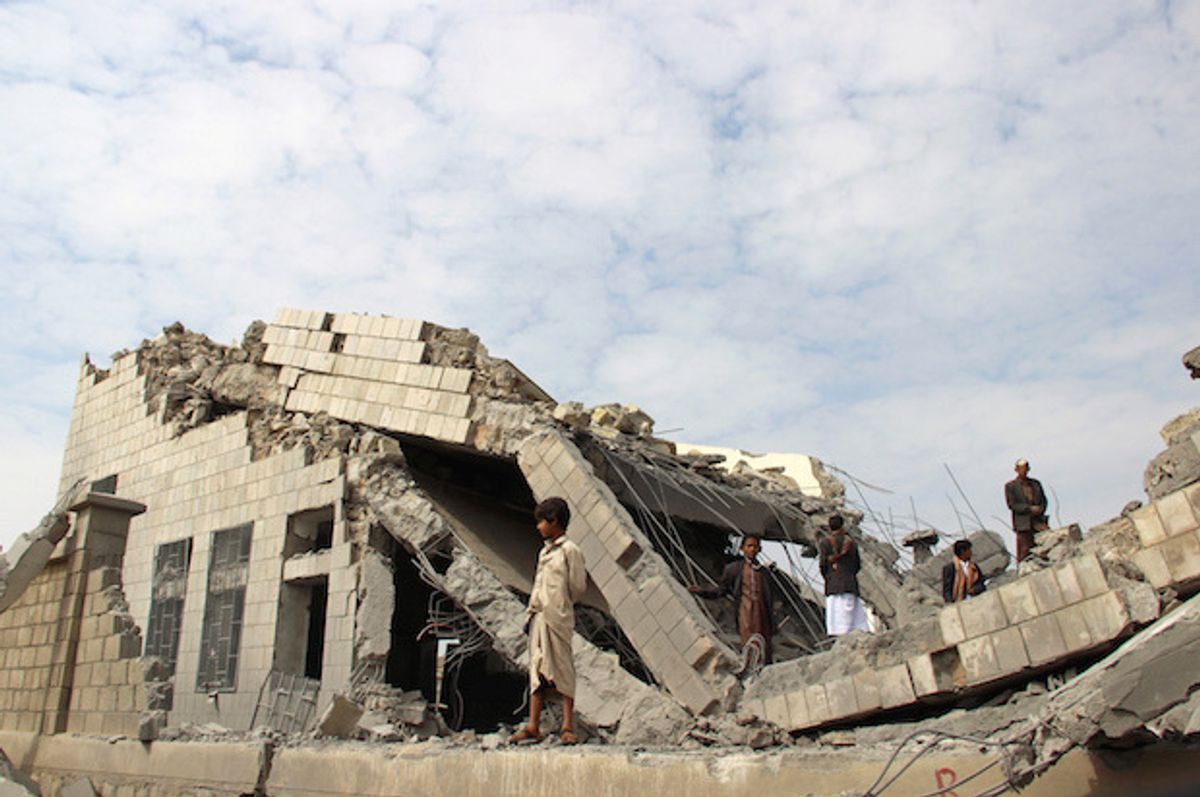 Yemenis stand on the rubble of a school destroyed by a U.S.-backed Saudi-led coalition air strike in an outskirt of the northwestern city of Saada, Yemen on September 14, 2016 (Reuters/Naif Rahma)
--

The bipartisan campaign to block U.S. arms sales to Saudi Arabia is growing, both within and outside the government.

"The reason we're doing this is because there is now overwhelming evidence that war crimes are being committed in Yemen and that most of them appear to be done by Saudi Arabia-led air strikes," Lieu told Salon in an interview on Monday.

He noted that U.S.-backed, Saudi-led coalition attacks on civilians have been thoroughly documented in an array of independent reports by Amnesty International, Human Rights Watch, Oxfam, the United Nations and other organizations.

A minimum of 10,000 Yemenis have been killed in the war, U.N. Humanitarian Coordinator Jamie McGoldrick reported in August. About 3,800 civilians have been killed and more than 6,000 have been injured; on average 13 civilian casualties have taken place each day since the coalition launched its bombing campaign in Yemen in March 2015, according to the U.N. Office of the High Commissioner for Human Rights.

"Because the Saudi Arabia-led military coalition has continued to kill civilians in Yemen, we're seeing more and more outrage from Congress," Lieu said.

Rep. Mick Mulvaney, a South Carolina Republican, is the legislation's first co-sponsor, and Lieu's office is in the process of gathering more co-sponsors in the House. "I imagine people will keep adding to the legislation the more they find out about the facts," Lieu said.

Explaining the motivation behind their joint resolution, all four senators cited the atrocities committed by the U.S.-backed, Saudi-led coalition in Yemen and how the destructive campaign there has strengthened extremist groups like al-Qaida and ISIS.

The Senate bill is scheduled for floor debate on Tuesday.

The $1.15 billion arms deal that both chambers of Congress are taking action to halt would transfer hundreds of tank structures, machine guns, grenade launchers and armored vehicle structures, along with thousands of rounds of ammunition, from the U.S. to Saudi Arabia.

Earlier this month, more than 60 members of Congress signed a letter calling on President Barack Obama to stop the weapons sale. The lawmakers expressed concerns about the "deeply troubling impact on civilians" in Yemen.

The White House has not responded to the letter, Rep. Lieu said.

Lieu cited a new report that found that one-third of the Saudi-led coalition air raids have hit civilian sites.

"That's just completely unacceptable," he said. "Every air strike that hits a civilian causes more momentum in Congress to stop the killings of civilians by Saudi Arabia. And every bomb Saudi Arabia drops on civilians degrades [its] reputation, as well as that of the United States."

For months, human rights organizations such as Amnesty International and Human Rights Watch have called on the U.S., the U.K. and other countries to stop selling weapons to Saudi Arabia.

In August Sunjeev Bery, the advocacy director for Middle East and North Africa issues at Amnesty International USA, told Salon, “It’s astonishing just how vast the flood of weapons has been to Saudi Arabia and other human rights offenders in the Middle East.”

The Obama administration has offered Saudi Arabia more than $115 billion in weapons, a record-breaking figure.

Many of these weapons have been used on civilians. Since a temporary ceasefire in Yemen broke down in early August, the U.S.-backed coalition has bombed a school, a market, a civilian home and a hospital run by Doctors Without Borders.

The hospital was the fourth medical facility supported by Médecins Sans Frontières to be destroyed or heavily damaged by the Saudi-led coalition. Amnesty International confirmed that the bomb used in this fourth attack had been made in the U.S.

A February report by a U.N. panel of experts documented coalition attacks on a slew of civilian targets, including refugee camps, weddings, hospitals, schools, homes, vehicles, markets and factories.

Despite the enormous civilian casualties and destruction, the U.S. has stood behind the war in Yemen. The Pentagon is still refueling coalition planes and providing intelligence to the Saudi-led coalition. The State Department has stressed that Saudi Arabia, a repressive theocratic monarchy that has exported radical Islamist ideology throughout the Arab and Muslim world, "remains a key ally and partner" and that the "United States continues to support a strong defense and security relationship with Saudi Arabia."

Support from the American and British governments is crucial for the continued operation of the Saudi-led war, in which the United Arab Emirates has also played a significant role. “Experts say the coalition would be grounded if Washington withheld its support,” the editorial board of The New York Times noted in an August editorial condemning the U.S. role in the "carnage" in Yemen.

For more than a year, Lieu, who represents a district in Los Angeles, has been raising concerns about U.S. support for the war in Yemen. He has been one of the most outspoken critics of a bitter campaign of violence that has dragged on for 18 months, often with very little media coverage.

As Salon has reported previously, Lieu in March sent a letter to the secretaries of state and defense, raising "serious questions about the coalition’s operational conduct."

"Last year, it was just me and a handful of other members who were speaking up about what looked like war crimes being committed by Saudi Arabia in Yemen," Lieu told Salon in Monday's interview. Now support is growing.

After Amnesty International and Human Rights Watch in October 2015 documented the Saudi-led coalition's use of widely banned U.S.-made cluster bombs in civilian areas, 12 members of the House sent a letter to President Obama urging the U.S. to take greater action to protect civilians in Yemen. By June 204 members of the House voted to block the transfer of cluster bombs from the U.S. to Saudi Arabia. Lieu says the number is increasing as the atrocities continue.

On Monday The Washington Post reported that the Saudi-coalition might be using in the war in Yemen U.S.-supplied white phosphorus, an incendiary chemical that can burn human flesh down to the bone. "If true, that is another action that will degrade Saudi Arabia's reputation in the eyes of the global community," Lieu said on Monday.

Lieu said he has been speaking regularly with Sen. Chris Murphy in an effort to bolster the campaign to block the U.S. arms deal.

Several months ago Lieu had been frustrated at the silence in the political sphere as well as in the media surrounding the U.S.-backed war in Yemen. Today he is more hopeful.