"If I had a bowl of skittles and I told you just three would kill you. Would you take a handful?" Trump Jr. tweeted 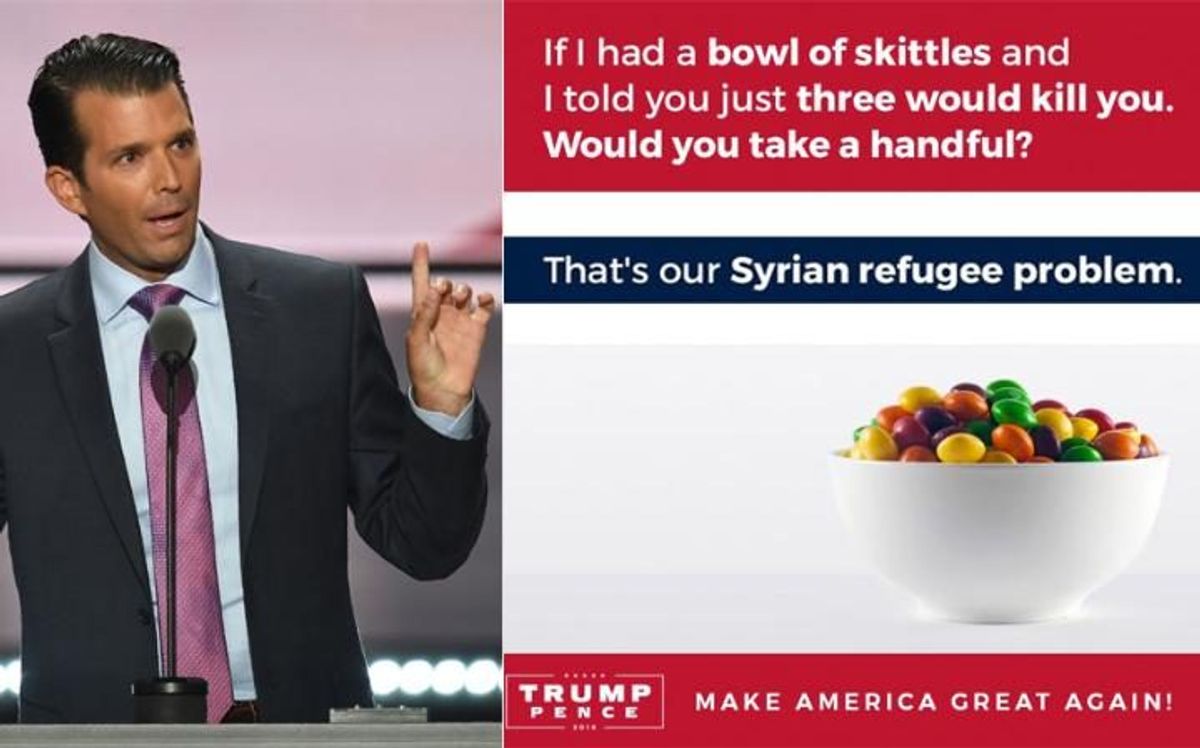 I really wanted to avoid the great Skittles debate of 2016. I shut off my social media just as the memes mocking Donald Trump Jr.'s ridiculous fearmongering about Syrian refugees took over Twitter last night. But, of course, I awoke to candy comparisons leading every newscast this morning. So let's dissect the latest "gaffe" from the eldest Trump son.

On Monday night Trump Jr. used a Twitter post to liken Syrian refugees to poisoned Skittles in order to suggest that America should not accept any refugees from the war-torn region. Recycling a white-supremacist meme first shared by former Republican congressman Joe Walsh, Trump Jr. affixed the official Trump logo onto an image of a bowl of candy, asking, "If I had a bowl of Skittles and I told you three would kill you, would you take a handful?"

"Now I saved you, cried the woman. And you've bit me, . . . why," Trump sang at a Florida rally Monday, reciting the lyrics to a jazz song "The Snake."

"And you know your bite is poisonous and now I'm going to die. Ah shut up silly woman, said that reptile with a grin. Now you knew damn well I was a snake before you brought me in."

The White House announced last week that it wanted to increase the number of refugees it accepts in the next fiscal year to 110,000. This year the country has taken in more than 11,000 Syrian refugees. More than 11 million people — over half of Syria’s population — have fled their homes, including 6.6 million displaced inside Syria and 4.8 million seeking refuge abroad, according to the latest U.N. figures.

But as the Washington Post pointed out, the bowl of Skittles would have to be awfully large for Trump's analogy to be accurate: The odds of being killed by a refugee in a terror attack is about 1 in more than 3.6 billion, according to a recent study from the conservative Cato Institute.

“Skittles are candy. Refugees are people. We don’t feel it’s an appropriate analogy,” said Denise Young, vice president of corporate affairs for the company. “We will respectfully refrain from further commentary as anything we say could be misinterpreted as marketing.”

But all the outrage and public condemnation doesn't seem to have fazed the eldest Trump, who just last week faced rebuke from the Anti-Defamation League for his gas chamber joke. And on Tuesday morning, Trump Jr. followed up his controversial tweet with more fearmongering about Western women being "sacrificed at the altar of mass migration":