The real Clinton Foundation: Joe Conason is out to tell the true story behind Bill Clinton's career in philanthropy 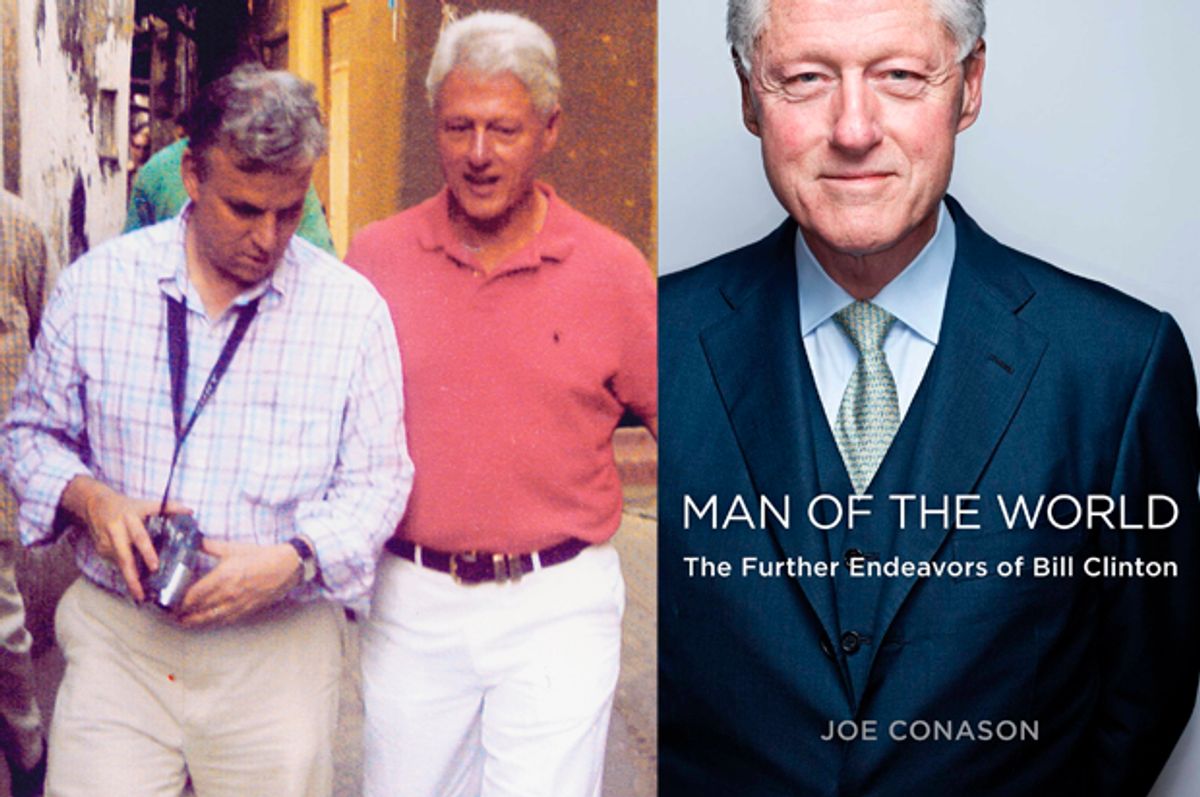 Journalist Joe Conason wants to change that. In his new book, "Man of the World: The Further Endeavors of Bill Clinton," Conason profiled Bill Clinton's post-presidency career in philanthropy. Through his work for the Clinton Foundation, the Clinton Global Initiative (CGI) and other activities, former president Clinton has devoted himself to fighting against poverty and for greater access to education, nutrition and health care around the world. I recently spoke with Conason over the phone. The interview has been lightly edited for length and clarity.

You’ve written a lot about the Clintons for how long now?

Well, I mean since he first ran for president. So that’s — what is it? Almost 25 years? Something like that.

So what motivated you to write this book about Bill Clinton’s post-presidency?

Esquire magazine asked me to write a profile about him in 2005 when he was just about to launch Clinton Global Initiative. That summer before [he and his associates] launched it, I went to Africa with him on his annual Africa trip, and we visited several countries.

And when I came back and went to the first CGI and wrote the piece for Esquire, it got a huge reception. I realized sometime after that that what they were doing was really interesting and different from what other presidents had done when they left office and that there might be a book in it.

It took a couple of years, but I persuaded [the Clintons] to cooperate with a book that they would have no control over. President Clinton didn’t see the book until August, when it was all ready to hit the printer.

But they nevertheless were very cooperative, and I went on a couple of more trips to Africa with him and other places, traveled with him a lot and interviewed him, you know, more than a dozen times — sort of sit-down, taped interviews. And it turned out that I was right, there was really a lot to write.

How would you say President Clinton’s vision of a post-presidency differs from other presidents before him? And, well, after him, as well?

Well, we’ll see what comes after. In spite of their sometimes tense relationship, President Obama has displayed a lot of interest in what Clinton has done since he left the White House since he knows he’s leaving soon, and they’ve talked quite a bit about it. So we’ll see what Obama does.

Clinton studied the post-presidencies of earlier presidents very carefully, and especially Jimmy Carter, who[m] he hosted at Camp David just before his own presidency ended to talk about what Carter had done. That again was a very tense relationship, one that had big ups and downs, but I think Clinton really respected what Carter had done.

But [Clinton is] a bigger personality in a lot of ways and more ambitious and wants to do more things. He never sort of set a boundary around what he was doing.

He started out realizing that something really needed to be done about AIDS treatment in the developing world, because there were likely to be 100 million AIDS victims if nothing was done.

How do you see the Clinton Foundation and [its] work? And how does that differ from the way it’s being portrayed in the media?

I’m looking at things like they’ve had 11 and a half million AIDS victims on treatment who otherwise would have died, for instance. That’s just one thing. Or, rebuilt the entire health system of the country of Rwanda. Or, you know, they’ve eliminated malaria from most of Tanzania and saved thousands and thousands of people’s lives that way.

It would take a long time to enumerate all the accomplishments of the foundation. This is not just Clinton himself. This is a lot of people who are either volunteers or employees there — doctors, volunteer business executives, all kinds of people who decided they wanted to address these problems. It’s why I wanted to write the book in the first place.

For some reason, very few of our colleagues have the slightest interest in that. I’ll hear, as I have already a few times while I’m going around talking about this book, Well, no one would deny the good work, but ...

That’s the difference between my outlook on it and what I would call the conventional media narrative now, which is all about this idea that somehow something corrupt had to have happened.

Keep in mind, these were people who, up until the election cycle started, would go to Clinton Global Initiative every year and suck up shamelessly to Clinton trying to get an interview. [The] same people now only want to talk about why nobody trusts the Clintons and ask, Don’t you think that they should shut down the foundation?

Sure, they should shut down the foundation and if those 11 million people die, nobody in our media world would care. I think says a lot more about them than it does about Clinton.

In the book, I talk a lot about The New York Times, which influences all media coverage basically, especially in politics. And The New York Times has been very focused on the foundation and problems that [Times journalists] allege in the foundation, such making up this whole story about Russian uranium, which was a completely fabricated, phony story taken from “Clinton Cash” that they put on the front page.

You know what, they know better. Celia Dugger, who is a very good reporter for the Times, went to Africa with Clinton and saw what he did — and saw what the foundation had done. So they know, and they ran a very good story about it years ago but this is years ago. And that was one time in 15 years basically that they paid attention the real work. Meanwhile, they are constantly on this, and it’s all part of the political cycle.

The popularity of the Clintons goes up and down. You can see it in Gallup polls that are taken every year, it goes up and down whether one of them is running for office — especially her. And I think you know the basis for all of that.

How would you characterize Bill Clinton's philosophy of philanthropy?

He talks often about keeping score. He wants to know what works. He wants to know how many people are getting the medicine and how many clinics are being refurbished. Whatever the metrics might be, he’s very interested in keeping track of that. And his daughter, who knows a lot more of how to do that than he does, is even more interested in that than he is. Being a millennial, that generation and having worked at McKinsey, she knows how to do those kinds of measurements and metrics.

He cares a lot about directing markets toward solutions. He is not a socialist. He believes the market is here to stay in one form or another. But he also know we have what economists call “market failures” — that is to say, big problems market don’t solve, for one reason or another.

AIDS treatment was a very good example of that. We had AIDS medications that worked, that kept people alive at least. We had gigantic potential market for them in the rest of the world besides the West. And yet, there was no way to harness the demand to create this supply at a price that could be afforded.

So they addressed that in a lot of ways that I described in the book and succeeded, to a great extent, in making AIDS treatment — and that doesn’t mean just drugs but testing and all the things you need to do around treating AIDS — available at an affordable price, given the amount of money that you could raise worldwide to do it.

Is that a market-oriented solution? It is, in a way because they drew the generic drug manufacturers into it, and the people who supplied chemicals to those manufacturers. They made it into a market for those people, those companies. Would it have worked if it was just left to the magical forces of the market? Definitely not. And he understands that. It’s government and social networks, government and private philanthropy, government and citizens, who he sees work[ing] on modern problems.

A lot of the focus on your work is on Bill Clinton’s uniqueness in his philanthropy, but there is a very good chance that he’s going to be unique in another way: He’ll be the first president to be a spouse of another president.

The first president to go back to the White House in any way, that I know of.

What sense do you have of how he feels about that? How he is going to approach this unique role he is about to take — well, hopefully will take?

He’s the kind of person who, when I used to try to talk to him about whether Hillary was going to run for president when she was a senator, he would just scold and say, “You know, she has to win her second Senate race first. We’re not going to talk about that because if you start talking about the next thing before you’ve done the thing in front of you, you might very well lose the one you are trying to do now.”

So he’s not going to talk about that in any meaningful way now. What I can say about him is, just observing him — there are things that he is interested in that if someone asked him, “What would you like to do?” I think there would be places where his talents, interests and even obsessions would take him.

For instance, even his adversaries agree that he is one of the most skillful diplomats we have ever had in public service in this country, both in and out of the White House. And I think a lot of the relationships that he’s had with heads of state and leaders of political parties and social movements and all kinds of organizations abroad, corporations, labor unions, he knows people all over the world.

He could serve President Hillary Clinton very well in diplomatic roles. Whether dealing with specific problems or overarching issues, I think, that’s something she would be wise to call upon him.

He is really concerned about climate change and about the transition to clean energy. He has been quite interested in this since [Al] Gore became his vice president and persuaded him that this is a huge issue that threatened the planet.

In his post-presidency, he has certainly tried to emphasize that. He has given Gore as much of a platform as he could at CGI. He has tried to bring those same kinds of market forces to bear and making clean energy affordable in cities.

He had less success at that than he would have liked because it is still a huge problem.

But . . . as a spouse of a new president, I think, he would be interested in trying to move that stone up the hill.