The hard truth about Terence Crutcher and Tulsa: What kind of white person do you want to be? 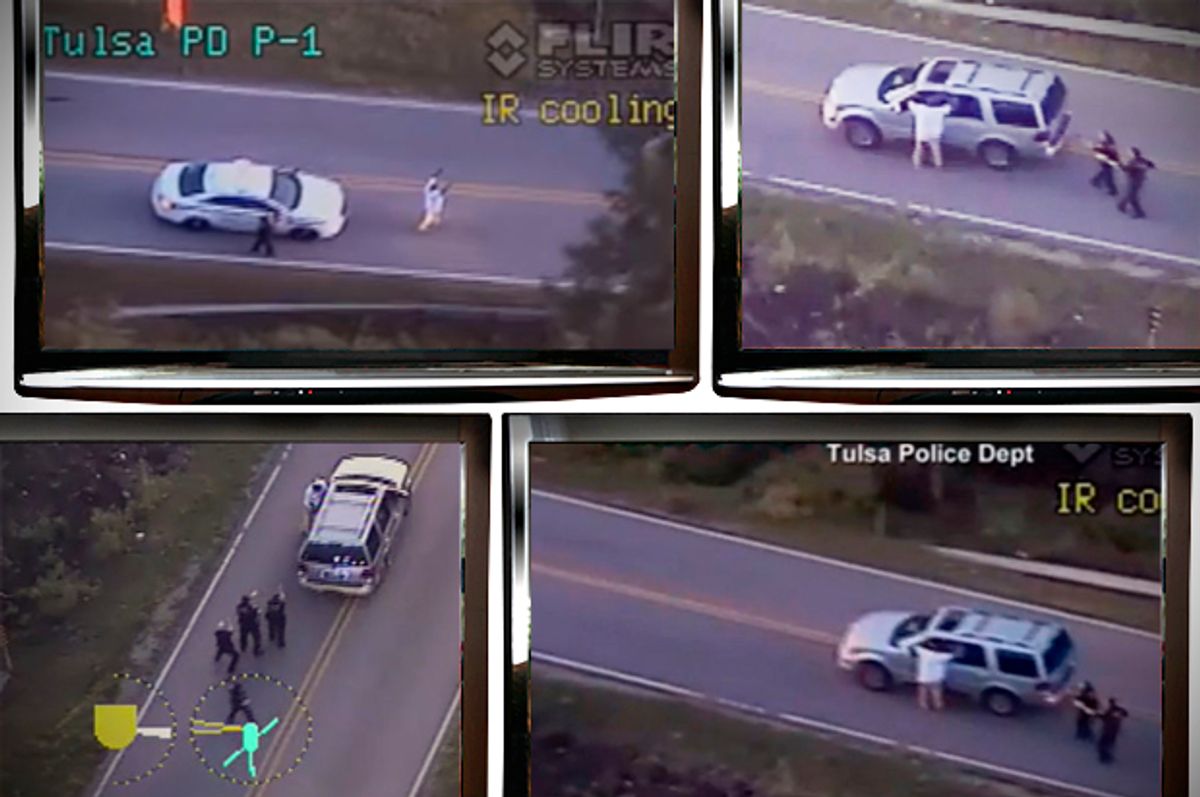 If America were a song, the killing of unarmed black people by the police would be a standard chord progression or rhythm, the sort of indistinguishable background noise that you hear so often you might not even notice it anymore.

On Friday, in Tulsa, Oklahoma, a 40-year-old black man named Terence Crutcher had car troubles. The police approached him. Crutcher responded by putting his hands in the air. The Tulsa police used a Taser on Crutcher. A Tulsa police officer, Betty Shelby, then shot him dead. They left him bleeding in the street for almost a minute before rendering any aid. The incident was recorded on video.

Crutcher had committed no crime. He was unarmed. He was a motorist in distress. He was driving home from a music-appreciation class at a local college. This street execution took less than 30 seconds.

Several months ago, I decided that I would no longer watch videos of black people being killed by America’s police. These images have become a type of pornographic violence, a new digital-era version of lynching postcards. I know all too well what dead black bodies look like. To be repeatedly exposed to such images is psychologically unhealthy.

And yet how could I ignore Terence Crutcher? So I made an exception. I was not surprised by what I saw. Lynching postcards and photographs were a way to circulate images of white-on-black racial terrorism with the goal of intimidating an entire community of people. The contemporary images of Terence Crutcher, Tamir Rice, Philando Castile, Alton Sterling, Eric Garner, Walter Scott, Laquan McDonald and many others do much of the same type of political work.

Over the last several years, I have written many dozens of essays about police thuggery and abuse against black and brown Americans. I have even developed an open-letter format to that end. How's that for macabre efficiency? Every one could start this way:

Please stop killing black men. I am a black man. Police have threatened and harassed me while I was doing nothing wrong. I do not know why you hate people like me so much. I have no criminal record. I hope that you will reflect on your behavior and subsequently do a better job of stopping the foul, horrible, and criminal behavior that routinely takes place in white communities all across these United States.

Those in denial about the war by American's cops on people of color will say they are "shocked" by what is quite common. White denial — perhaps most so when embraced by people of color — is one of the bedrocks and cornerstones of white supremacy.

As I would tweak, modify and update this with specific, horrific details to fit a given circumstance, I would be reminded that I was ultimately making both a plea and a demand to the white reader. Black people — especially black men — are not monsters — yet somehow the white gaze all too often and immediately defaults to such a conclusion.

I know this phenomenon, which philosophers such as Judith Butler, George Yancy and others have described as white racist paranoia, is neither my fault or responsibility. It is an existential and psychological problem that white folks must heal for themselves. But I also know that as a matter of practical survival in America and elsewhere people of color must be hyperaware of white folks’ anxieties and fears. To not do so is a grave risk — and often a matter of life and death.

Police violence against African-Americans is also a reminder that black people are an asterisk on American history that upsets and challenges almost every popular myth and narrative about the United States.

The freedom symbolized by automobiles and the road are central to American culture. As such, African-Americans used cars to escape the racial terrorism of Jim and Jane Crow and the formal apartheid of the American South. But for decades (and perhaps even now in the present) black Americans still needed to use resources such as "The Negro Motorist Green Book" in order to try to travel in safety and with dignity.

Black America’s collective memory contains many stories of happy journeys by car that are disrupted and derailed by white bigotry and racism. In 2015  this was the narrative of Sandra Bland, a young black woman who, while traveling to her dream job from Chicago, was pulled over by an overzealous white police officer on a pretext stop and then somehow ended up dead in a prison cell in a small Texas town many hundreds of miles away from her family. This is a black American nightmare made real. The $1.9 million in blood money paid to Bland's family by Waller County in Texas will not reanimate Sandra Bland. Her death is permanent.

The police killing of Terence Crutcher is also a reminder of how the ugliest parts of America’s history and culture of racial violence against black people are still with us. As the Tulsa police took less than 30 seconds to kill Crutcher, officers can be heard describing him as a “big, bad dude.” Terence Crutcher is not an ogre, troll or bear. He is a human being — a brother, son, father and friend.

Moreover, describing Terence Crutcher as a "big, bad dude" echoes the overt white-supremacist invective of the 19th- and early-20th  centuries, when as brilliantly explained by the late David Mills (a writer for TV shows such as “The Wire” and “Treme”), black men were often described in headlines as being “giant negroes” who partook in rampages against the police and raped white women.

In 2014, Darren Wilson, the white Ferguson, Missouri, police officer, who shot the black teenager Michael Brown at least six times, described him as being able to run through bullets unharmed as he snorted and made bestial noises. Brown was apparently a black Goliath that had to be put down by the “hero” Darren Wilson.

Because it is such a fixed feature and tradition in the country’s social and political life, it is difficult to find anything new to say or write about police violence — or racism more generally — against black and brown people in America. This is the stress and marathon of working the “racism beat.” Writing on Medium, Cord Jefferson described this condition perfectly:

We can go on like this, of course, because in America the racist traumas are widespread. How about the next time a black person is stopped and patted down without cause? How do you write about that humiliation in a way that’s different from what you wrote when Forest Whitaker received the same treatment last year, and a New York City police chief before him, and thousands of other innocent black and Latino men before them?

I used to think that maybe I’d let my anger serve as an engine. But I’ve since discovered that my anger over each new racist incident is now rivaled and augmented by the anger I feel when asked to explain, once more, why black people shouldn’t be brutalized, insulted, and killed. If you’re a person of color, the racism beat is also a professional commitment to defending your right and the right of people like you to be treated with consideration to an audience filled with readers champing at the bit to call you nothing but a nigger playing the race card.

What to do? I used to end my essays on police racism and brutality with some or other version of the following observation:

When America’s police shoot, kill, beat, use excessive force, against and otherwise violate the human rights and dignity of black and brown people this is the system working exactly as designed and intended. On a basic level, racism persists in the American criminal "justice" system because white America wants it to.

On this one occasion, however, I will deviate from the script.

Paul Breines was a freedom rider. He, along with dozens of other white young people, risked their lives to confront white supremacy in the Jim and Jane Crow American South during the civil rights movement and long black freedom struggle. In making his decision to join the movement, Breines asked himself, “What type of white person do I want to be?” His personal moral accounting moved him to join the freedom rides.

I implore white Americans to watch the video recorded killing of Terence Crutcher by the Tulsa, Oklahoma, police (or the many other examples of similar incidents) and to ask themselves the same question: What type of white person do you want to be?

I offer a reminder as you undertake this personal moral accounting. Do not forget that silence and inaction in the face of such wrongdoing and bigotry are in fact complicity with them.

Again, what type of white person do you want to be?