The Muslim card: The "other" birther claim Trump is keeping in play

Trump admitted that Obama was born in the U.S., but he hasn't renounced the rest of the birther conspiracy theory 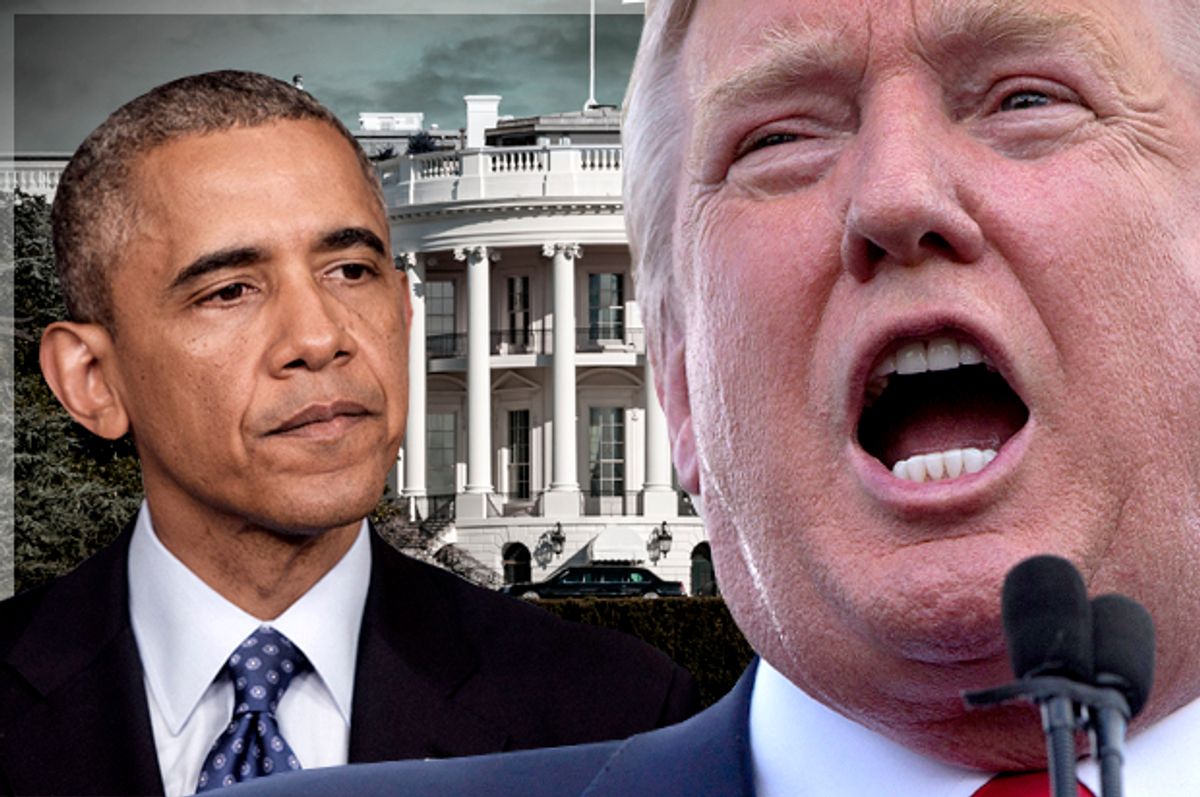 In the book "The Art of the Deal," Donald Trump and his ghostwriter wrote, "You can’t con people, at least not for long." Not surprisingly, Trump's strategy as a presidential candidate has been to directly contradict his own published advice again and again.

Indeed, just the other day Trump colossally tricked almost everyone when he finally denounced the main thrust of his birther crusade by graciously anointing President Barack Obama as an official citizen of the United States. Trump said, "Hillary Clinton and her campaign of 2008 started the birther controversy." He continued, "I finished it. I finished it. You know what I mean. President Barack Obama was born in the United States. Period."

Everything he said during his brief remarks about the birther issue late last week was a fabrication, minus the part about Obama being an American citizen. And regarding that, he left out two major aspects of the conspiracy theory — two parts that we can assume he and his fanboys still believe.

Before we dig into what Trump left out, it's important to emphasize that no, Hillary Clinton didn't "start" the birther thing — not by a long shot. In research that I conducted for a book in 2008, I discovered that the movement really began during the 2004 campaign when Obama ran for the U.S. Senate. Around the time Obama delivered his legendary keynote address at the Democratic National Convention, an email allegedly composed by Illinois politician Andy Martin began circulating, titled "Who Is Barack Obama?" The manifesto featured a litany of lies regarding Obama's ethnicity, religion and, of course, his birthplace.

The falsehoods contained in the email were joined by various characters in the political press who, once Obama's name was being circulated as a possible 2008 contender, routinely mixed up his name with Osama Bin Laden's. For some pundits it was accidental; for others, such as Bill Cunningham and Rush Limbaugh, it was entirely deliberate, thereby subliminally and with racist intentions conflating the American non-Muslim politician born in Hawaii with the mastermind of the 9/11 attacks. Clever, no?

While the email and the name mix-up stirred underground discussions inside conspiratorial bubbles online, birtherism was never really mainstreamed until NBC News and Bloomberg political analyst Mark Halperin wrote in his column for Time magazine that John McCain should, "Emphasize Barack Hussein Obama’s unusual name and exotic background through a Manchurian Candidate prism." Clearly Halperin in February 2008 was paying close attention to the proto-birther movement and thought it'd be an excellent strategy for the presumptive Republican nominee. Halperin also suggested that McCain should "encourage interest groups, bloggers, and right-leaning media to explore Obama's past."

It wasn't until a week later that Hillary Clinton was asked about the issue, to which she replied, "I take [Obama] on the basis of what he says. And, you know, there isn’t any reason to doubt that." She continued, "No! There's nothing to base that on, as far as I know." Donald Trump has claimed to know all of the "best words" so surely he would recognize Clinton's words as contrary to the birther claims popularized online and mainstreamed by Halperin.

So, no, Clinton didn't start birtherism. And Trump didn't end it, either (as he has sometimes claimed to have done in 2011 when Obama released his long-form birth certificate). A full two years after Trump "ended" the issue, he tweeted:

That's two massive cons in two short sentences. But by merely bestowing the president with citizenship, Trump left out two major prongs of the conspiracy, and the political press, blinded by the spectacle, failed to see it.

Birtherism isn't exclusively about the birth certificate. The place of birth is the seed, but the rest of the conspiracy grew out of it by design and directly involved Obama's religion and whether he's part of a terrorist sleeper cell, as Mark Halperin and Andy Martin originally suggested. The whole point of placing Obama's birth in Kenya rather than his actual birthplace in the Kapiolani Women's Hospital in Honolulu was for the express purpose of characterizing Obama as a terrorist sympathizer at best and an al-Qaida operative at worst. Left to the knee-jerk assumptions of poorly educated red-state voters, it worked extremely well and survives today.

Trump, through these omissions, allowed plenty of wiggle room for his loyal fanboys to continue grappling onto the theory.

Despite Trump's referencing of Clinton's remarks from early March 2008, members of the political press have mostly failed to review those remarks. And if they had, they would've learned that she was responding to a question about Obama's religion, not his birthplace. The religion angle, by the way, is directly linked to Obama's father's birth religion, but the theory conveniently failed to note the fact that Barack Obama Sr. was an atheist at the time of the president's birth in 1961. (Or was he? Hmmm.)

As most conspiracies go, one misreported detail can too easily spawn a slew of other rumors, lies and whisper campaigns. This one is reliant upon gigantic leaps of logic, going something like this: Obama's dad was Kenyan and was born into the Islamic faith, therefore the president had to have been born in Kenya, is probably also Muslim, and because Muslims are carrying out terrorist attacks against American interests, Obama must be a covert operative who will overturn the Constitution while allowing his fellow jihadists to continue to their attacks on American soil. Or worse. Because, they falsely believed, all Muslims are terrorists.

Trump was perhaps the most recognizable marketer of this theory. Still is. And, to repeat, he's yet to renounce two-thirds of the birther theory.

Shortly after Halperin borrowed the conspiracy and injected it into the carotid artery of the 2008 election, and prior to Hillary Clinton's being questioned about Obama's religion, Michelle Obama observed, "They threw in the obvious, ultimate fear bomb. 'When all else fails, be afraid of his name, and what that could stand for, because it's different.'"

The goal, of course, was to stoke racial animosity. It was the Southern strategy's high-water mark, given that the president is African-American. Cable news roundtables in which white pundits concern trolled about Obama's "exotic" name, calling attention to his blackness, became a top-shelf feature of the primaries and continued into the general election when Sarah Palin went rogue and accused the president of "palling around with terrorists." Trump chose to take up the topic from Palin when he had a television show to promote and obviously he was all too willing to go full racist as a means of promoting his NBC vanity project.

Until Trump clarifies his position, he's still very much in the business of birtherism and anyone letting him off the hook is ignoring the major racially driven details inherent in his five-year con — his "ultimate fear bomb."