Behind China's steel curtain: How a heavy metal merger might stave off a trade war

Why consolidation in China’s steel industry could send ripples through the U.S. economy — and shut Trump up 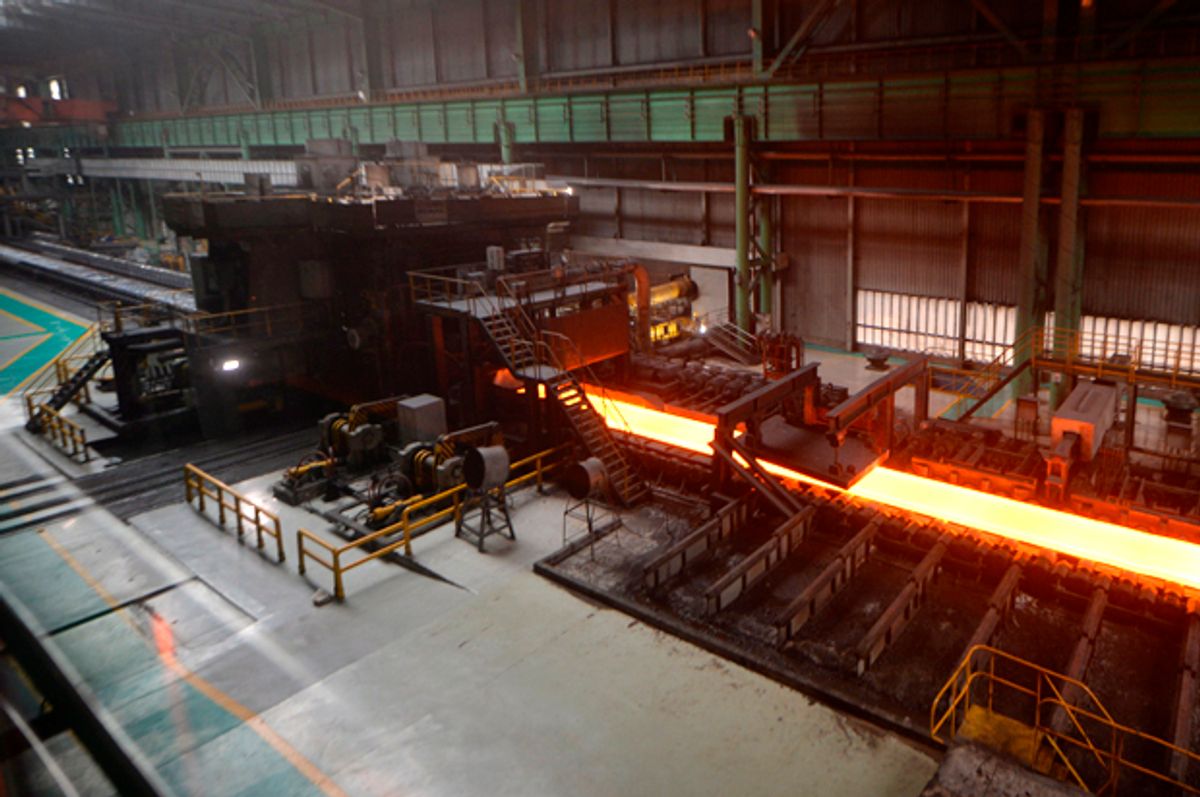 China has been shoveling excess amounts of steel onto global markets, playing a major role in driving down global prices and rankling American producers and government officials. Now a massive shakeup is taking place in China’s juggernaut steel industry, and the question on many people’s minds is what effect this will have on that country’s ongoing trade dispute with the U.S.

This week two of China’s largest steel companies, both state owned, announced plans to merge into one enterprise that would issue nearly one-fifth of the country’s entire steel output. Under the deal, Baosteel and Wuhan Iron and Steel would become China Baowu Iron and Steel Group. The new company would annually produce about 60 million metric tons of steel, an amount equivalent to about three-fourths of the total steel production output in the U.S. This would put China Baowu behind only Luxembourg-based ArcelorMittal as the world’s largest steel producer.

The merger comes after China has been recently hit recently with a series of punitive measures from the United States: In May the U.S. government imposed steep duties — as much as 210 percent — on steel imports from China and other countries. And in September the U.S. Commerce Department announced preliminary tariffs (import duties imposed while an anti-dumping investigation proceeds) on Chinese stainless steel. For its part, China has denied that it is dumping steel and has argued that the tax rebates it gives to its steel producers aren’t state subsidies.

Meanwhile, U.S. producers are struggling. Pittsburgh-based U.S. Steel Corp lost $1.5 billion last year and $340 million in this year’s first quarter alone. The struggles of American steel manufacturers have provided Republican presidential nominee Donald Trump with ammunition to push for a more than 45 percent tax on all Chinese imports, a move that would likely spark an ugly trade war.

The proposed Baosteel-Wuhan merger is part of Chinese President Xi Jinping’s pledge to redirect his country’s complex array of state-owned enterprises to reduce their manufacturing capacity. China’s economy, the world’s second largest, is growing at its slowest pace in 25 years and this has created a massive oversupply of steel, a key ingredient in everything from office buildings to washing machines.

Beijing also faces the challenge of what to do with the millions of workers who would lose their jobs as it tries to reduce manufacturing output without having an adequate amount of service-industry jobs to replace factory positions.

“China has to deal with supply-side reforms on the one hand and on the other hand be sensitive to labor issues,” Mark Wu, assistant professor at Harvard Law School who specialized in international trade law, told Salon. “There’s a need to reform in China regardless of what types of trade measures are being imposed by China’s trading partners.”

Consolidating the Chinese steel industry into a smaller number of players might lead to more effective planning, Wu said, comparing the move to having three airlines flying a specific route instead of 20. “Consolidating these players makes it easier for the Chinese industry to try to monitor overall supply in order to mitigate the scale of an overcapacity problem in the future,” he said.

But American manufacturers are skeptical about the motives of China, which already leads the pack in producing large quantities of steel. Chinese manufacturers churned out 804 million metric tons of the metal last year, according to the World Steel Association. And China exported a record 112 million metric tons last year, a rise of 20 percent from the previous year. China’s export volume is more than the total amount of steel made by Japan, the world’s second-largest steel-producing country.

“For the last decade the Chinese government has used mergers and acquisitions as a potential leverage point to reduce industrial overcapacity, but there’s zero evidence that the strategy has worked,” Scott Paul, president of the United Steelworkers Union-backed Alliance for American Manufacturing, told Salon. “This merger may actually have an opposite effect. It could create a global steel giant with a newfound ability to buy up some other assets around the world.”

The United Steelworkers has estimated that 19,000 American steelworkers face layoffs, reduced working hours or expiring unemployment benefits this year because of the global steel glut presented by China’s overcapacity.

David Dollar, a senior fellow at the John L. Thornton China Center at the Washington-based Brookings Institution, told Salon it could take a couple of years to determine if China has fulfilled its pledge to whittle down its steel overproduction. (So far, China has missed its targeted reductions for this year)

“This merger is potentially helpful,” Dollar said. “You would hope these two big steel companies coming together can help resolves some of the overcapacity if they close some facilities and streamline operations. To be fair to China they’re making some progress on consolidation.”

Yet the fact that China’s overcapacity results in cheap steel has some cheering in the U.S., including some conservatives and economic libertarians.

“Tariffs on steel imports limit choices and increase costs for these industries,” Tori Whiting, a researcher at the conservative Heritage Foundation’s Center for Trade and Economics, wrote last week. “Those costs are ultimately borne by American consumers and act as a tax on everyday goods made from steel, such as lawn mowers, washing machines, and microwaves.”

Using the same line of reasoning in June Tim Worstall, a fellow at London’s Adam Smith Institute, argued on Forbes against U.S. anti-dumping measures. “What we want is to be able to consume as much as possible at the lowest cost possible,” he wrote.

But Scott at the Alliance for American Manufacturing scoffed at these points. “It’s damaging to the market to have this subsidized overcapacity in the long term,” he told Salon. “It’s an inefficient use of capital. It’s disrupting a major contributor to U.S. manufacturing. If this drives U.S. steel companies out of business, that doesn’t do any U.S. steel consumers any favors down the road.”