Nothing left but the dog whistle: Trump, "real America" and the death of the conservative movement

White provincial resentment, as embodied by Trump and Sarah Palin, has destroyed the conservative movement 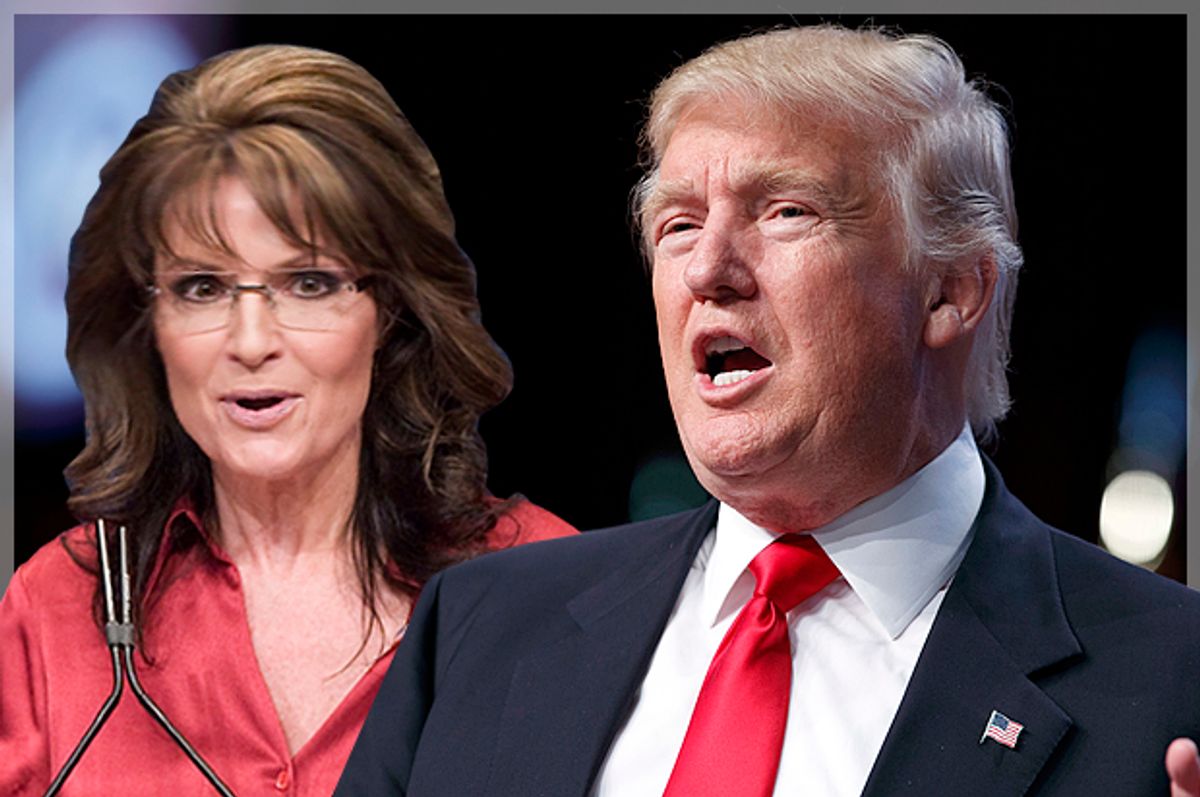 That day 15 months ago when Donald Trump descended that escalator to announce his candidacy, it was obvious to me that whether he won, he was going to turn the race into something we had never seen before. He had massive celebrity and a lot of money, and he was tapping into a groundswell of anger over immigration that had shocked the political world just a year earlier when the incumbent House majority leader (Rep. Eric Cantor of Virginia) was defeated in a primary largely because of that issue. It was foolish for political insiders to laugh at the possibility that Trump could go all the way. But they did. And they've had to play catch-up ever since.

Members of the mainstream Republican establishment were knocked for a loop. They had offered up a dazzling array of GOP all-stars for the public to choose from: former and sitting governors and senators, movement heroes, policy wonks, tough guys, pious religionists, a world renowned neurosurgeon and even a famous high-tech businesswoman. It was beyond their imagination that this crude and inexperienced demagogue could beat any of them, much less all of them.

But as much as political insiders and establishment leaders should have been more savvy about the potential of a populist celebrity billionaire to throw a grenade into a presidential campaign, it was entirely reasonable for many conservative movement leaders to be shocked that a man like Trump could capture the imagination of their movement so quickly and without any serious commitment to their cause.

After all, the last we heard, members of the Tea Party was still running the congressional asylum. Those folks may have a flair for the dramatic, but they're true believers in the conservative movement. There was every reason to believe that the millions of Republican voters who supported them were, too.

What conservatives found out was that all those years of carefully and patiently educating their voters in the nuances of small government, traditional values and strong national defense — to the point where they could elicit ecstatic cheers by merely uttering the words "tort reform" or "eminent domain" — turned out to be for naught. The voters really only heard the dog whistles.

This has been a rude awakening for conservative intellectuals who've spent their lives developing their elaborate ideological framework only to find their millions of supposed adherents never really cared about it. Zach Beauchamp at Vox interviewed one such leading intellectual, a professor of political theory at George Washington University named Samuel Goldman, about the state of the movement in the age of Trump. Goldman admitted that the conservative movement is "doomed," or at least it is no longer viable as a majority, and rightly attributed the problem to the fact that conservatives no longer attract anyone but white people:

The answer has to do with the adoption of a fairly exclusive vision of American nationalism -- which sees America not only as a predominantly white country but also as a white Christian country and also as a white Christian provincial country. This is a conception of America that finds its home outside the cities, exurbs and rural areas, in what Sarah Palin called the real America.

If you project yourself as a white Christian provincial party, you're not going to get very many votes among people who are none of those things. That's what's happened over the last 10 or 15 years.

Goldman said this is the result of a demographic delusion in which conservatives believed, despite all evidence to the contrary, that their idealized vision of the real America was literally true.

I'm confused as to why he thinks this trend goes back only 10 or 15 years, however. This idea that "real Americans" are white small-town folks, hardscrabble farmers, blue-collar workers and small-business owners who live somewhere in the heartland has been around a lot longer than that. And it's been used specifically in politics since the late 1960s, when Richard Nixon first coined the phrase "silent majority" and the political press began to notice its experiences were not necessarily reflective of the nation at large.

I previously cited a piece by Joseph Kraft, a famous newspaper columnist of that era, because it illustrated the point of view that began to pervade the political establishment in the wake of the upheavals of civil rights, the counterculture and the anti-war movement. He wrote it right after the famous 1968 Democratic convention in Chicago:

Most of us in what is called the communications field are not rooted in the great mass of ordinary Americans – in Middle America. And the results show up not merely in occasional episodes such as the Chicago violence but more importantly in the systematic bias toward young people, minority groups, and presidential candidates who appeal to them.

The most important organs of media and television are, beyond much doubt, dominated by the outlook of the upper-income whites.

From there flowed decades of "plenary indulgence" toward this white, provincial real America by both parties, in which politicians were required to pledge fealty to "heartland values" and ensure that such folk were treated with the deference and respect they required.

In other words, this isn't new. The only thing that's changed is that the people real Americans resent -- African-Americans, women, recent immigrants and LGBT folks -- are now assuming positions of prominence and power, and the provincial anger, stoked for so long by the Republican Party, has finally boiled over. Donald Trump is telling those folks what they've been wanting to hear, exactly the way they've been wanting to hear it for a very long time.