Welcome to the Terrordome: “Stop-and-Frisk” and Donald Trump’s promise of a police state for black people

It was billed as black outreach, but Trump's embrace of racist policing tactics a terrifying master plan 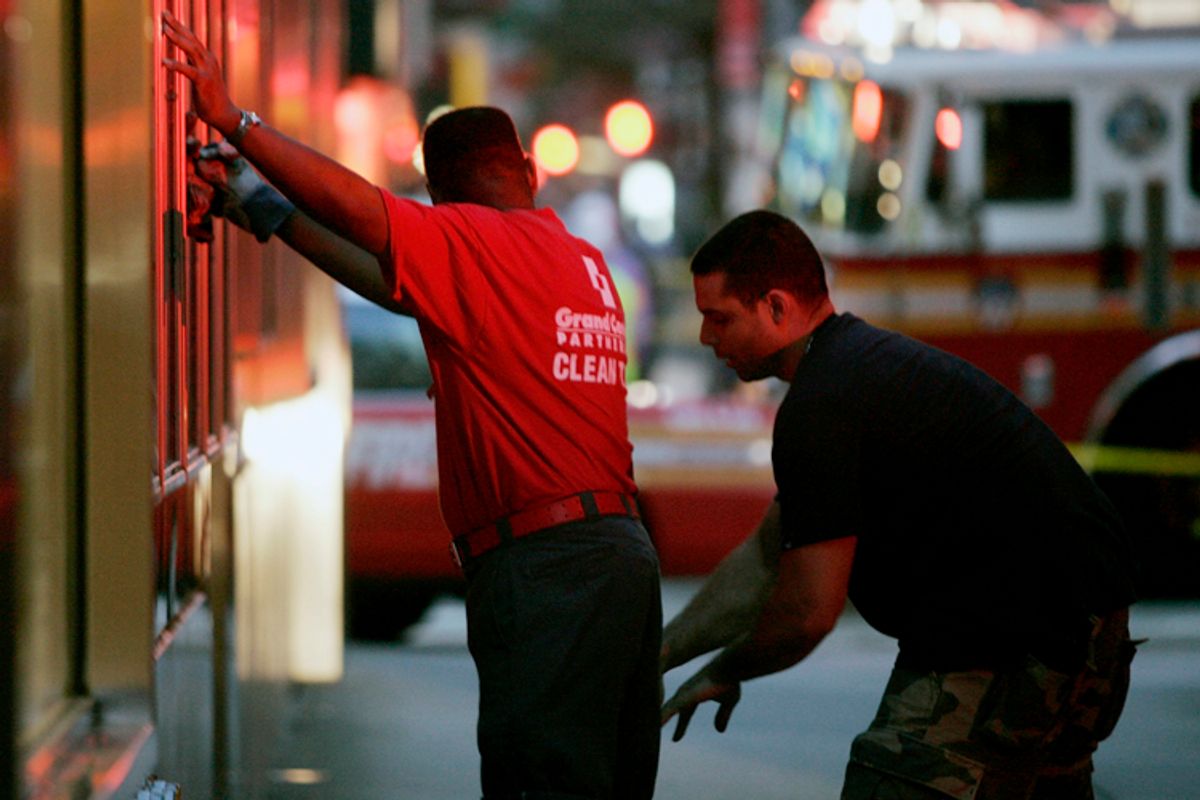 Fox News hate merchant Sean Hannity moderated the event which will be broadcast on the network at a later date. Almost all of the attendees of this event were white. Before that crowd, Donald Trump introduced the next component in his plan to win over black voters — a group whose lives he has repeatedly described as a type of dystopian nightmare and living hell that is worse than slavery, the Black Codes, and Jim and Jane Crow.

"Right, well, one of the things I’d do, Ricardo, is I would do stop-and-frisk. I think you have to. We did it in New York, it worked incredibly well and you have to be proactive, you know, you really help people sort of change their mind automatically, you understand, you have to, in my opinion, I see what’s going on here, I see what’s going on in Chicago, I think stop-and-frisk. In New York City it was so incredible, the way it worked. Now, we had a very good mayor, but New York City was incredible, the way that worked, so I think that could be one step you could do."

Donald Trump’s “African-American town hall” is a moment that calls for the wisdom and genius of the master comedians Richard Pryor and George Carlin. Alas, they are no longer here to find for us the comic value in the event. Even amid all the absurdity of Trump’s black “outreach” campaign, we must not overlook how Donald Trump’s national “stop and frisk” plan is deadly serious business. It has the potential to ruin the lives of many millions of people,  imperiling their safety, security, freedom and dignity.

A serious question remains: What is the political logic driving Trump’s embrace of stop-and-frisk as a centerpiece of his so-called “black outreach” campaign?

Stop-and-frisk is a failed public policy. It has been found to be ineffective and counterproductive in reducing street crime. Stop-and-frisk is also an example of a broader approach to crime known as “broken windows policing,” a strategy whose effectiveness in reducing street crime is increasingly suspect and questionable. Donald Trump’s political brand is based upon his ability to sell himself as a “winner” and  a man who surrounds himself with “experts” that “know how to get things done.” Yet, he is embracing an approach to policing  that has been proven to be a losing proposition.

Stop-and-frisk is extremely unpopular among black Americans. For example, as reported by a The Wall Street Journal/NBC 4 New York/Marist Poll of voters in New York’s 2013 mayoral election, 75 percent of African-Americans wanted stop-and-frisk policies to be “overhauled.” The systematic harassment of blacks and Latinos by America’s police under stop-and-frisk is also racist and classist. For example, while black and brown youth in New York were stopped much more often under stop-and-frisk, it is actually white people who were twice as likely to have weapons, drugs, and other contraband on their persons. Moreover, in a moment when the United States has experienced urban rebellions in cities Charlotte, Ferguson, Baltimore and elsewhere in response to police thuggery and brutality, onerous and draconian tactics such as stop-and-frisk will actually foment the type of disorder and chaos that Trump supposedly wants to end.

Ultimately, to support it is to drive away blacks whose support Trump and the Republicans purport to want: It cannot be part of an effective outreach plan to attract African-American voters.

So what, then, is actually driving Donald Trump’s “black outreach” campaign?

First, his black outreach campaign is simply one more example of the tired, fake, insincere, and ineffective efforts by Republican presidential candidates to win over non-white voters with the goal of appearing more moderate for the general election. In this cynical ploy, a faux-courting of non-white voters is a way of making independent and center Right-wing white voters feel more comfortable with the extreme and retrograde conservatism and racism of the current Republican Party.

Second, and most importantly, Trump’s promise to create a nationwide stop-and-frisk program targeting black and brown people is red meat for the “basket of human deplorables” that is his base. As shown by a litany of public opinion polls and other research, Trump supporters are racists, bigots, authoritarians, misogynists, and extremely hostile to African-Americans and other people of color.

Trump’s promise to expand a mechanism that enables police harassment and the unfair targeting of black people is further proof of his fascist bonafides and strongman persona. To this point, Trump has now vowed to create a Gestapo-like force that will magically remove millions of “illegal aliens” from the United States the day he is inaugurated, violate the Constitution by banning Muslims from the United States (as well creating an enemies list and registry for those already here) and disregard the rights and liberties of black Americans under the guise of “protecting” that community from crime.

When these facts are added to his threats against the free press and the First Amendment, his unfounded claims that the country’s political institutions such as voting are “rigged” against him, as well as encouragement of political violence against his foes such as Hillary Clinton and the Black Lives Matter movement, it becomes abundantly clear that Donald Trump is not flirting with fascism, he is a dyed-in-the-wool member of and poster boy for that ignoble political tradition.

Take all his promises together and it becomes clear: Donald Trump wants to create a police state where non-whites and Muslims live in a state of perpetual terror and fear.

This is the America that Trump wants to birth. This is not a work of speculative fiction from Philip K. Dick or an installment of Rod Serling’s “The Twilight Zone.” It is real, it is here, it is present — and if Donald Trump and his “basket of deplorables” get their way, less than 60 days from being enacted.

Welcome to the Terrordome.