Chinese viewers — and investors — are saving Hollywood. But is China's influence causing studios to self-censor? 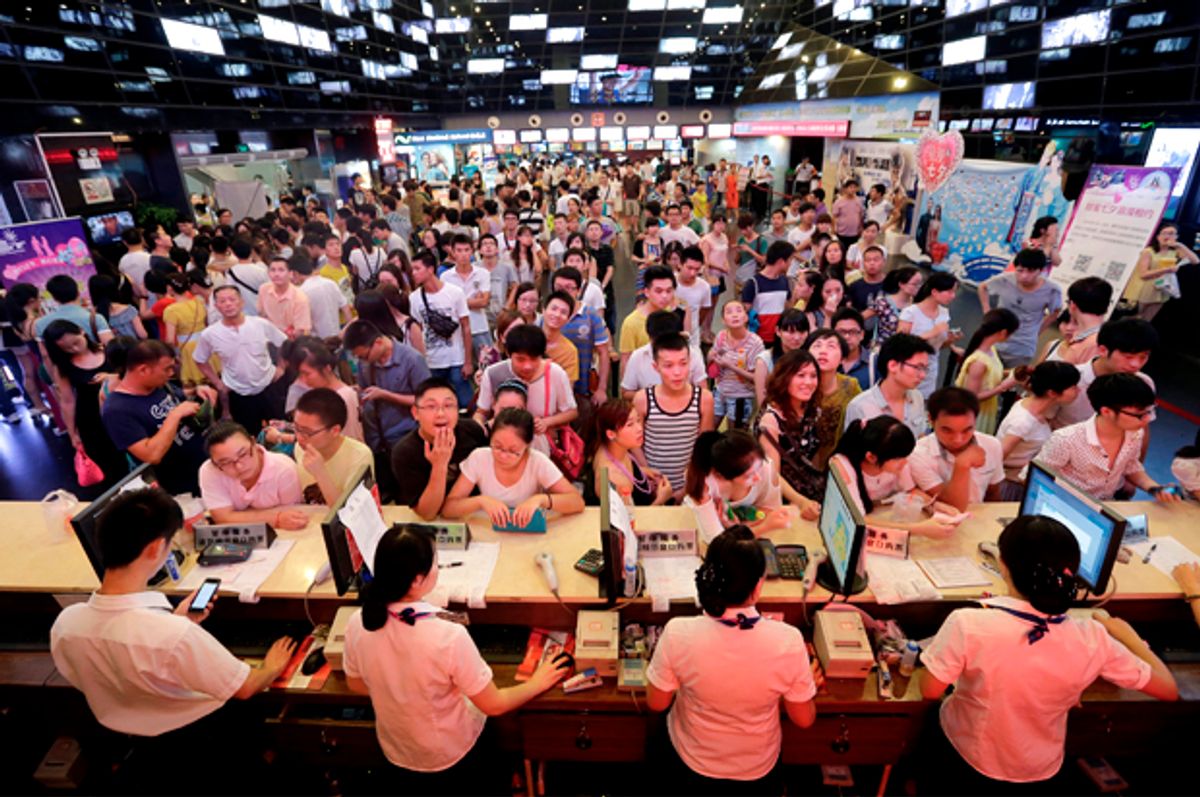 How’s this for a good news-bad news situation? If you are in the business of making or selling movies, a market bigger than any you’ve ever dreamed of — a country of more than a billion people — has opened up, and its invigorated population is flocking to movies theaters in a way that Americans have lost their enthusiasm for.

But the country is also a dictatorship (its constitution calls it a “people’s democratic dictatorship”) with an uneasy relationship to the West, a history of censorship, a government with no accountability or transparency and little tradition of the freedom of speech we take for granted here. Sound good? Good! Because for Hollywood, China is probably going to be the biggest story for the next decade or so. In fact, China could become the biggest film market in the world as soon as next year.

“This is a very big deal,” said Jason Squire, editor of newly revised “The Movie Business Book” and a lecturer at the University of Southern California’s film school. “The first thing worth understudying is the velocity: They are building on average 22 screens a day.” China’s population is approaching 1.4 billion, and the portion of the nation belonging to the urban middle class — those most likely to be filmgoers — is growing rapidly and is roughy equivalent to the entire U.S. population of 320 million.

And China’s film market, which increased by almost 50 percent last year, is now about $6.8 billion in box office.

China’s impact on Hollywood filmmaking is just getting started, but already it has made some bizarre things happen. An invading Chinese army has been transformed into marauders from North Korea when MGM decided it did not want to imperil its chances to break its “Red Dawn” remake in the Chinese film market. In “Ironman 3,” a notorious villain from the comic book known as “The Mandarin” becomes an ethnically ambiguous figure played by the Anglo-Indian actor Ben Kingsley.

Movies that bombed (or close to it) in the States — “Battleship,” “Pacific Rim” — are receiving 2017 sequels because of the enthusiasm of Asian audiences. “Independence Day: Resurgence,” released this summer, includes a Chinese actress previously unknown to most Americans — Angelababy — as well as a bizarre scene in which Stanley Tucci’s character takes a break from a chase to take a gratuitous sip of a Chinese brand of soy milk.

Expect more Chinese actors, gratuitous product placement and baffling sequels as time goes on. And, yes, expect more script tweaks in deference to Beijing. A new report from PEN America said that foreign journalists in China “face more restrictions now than at any other time in recent history.” The Chinese government remains very hard to read compared to Western democracies, and 21st-century China is a strange hybrid: a kind of capitalist autocracy, combining a mostly free market with state repression. This is the nation of Tiananmen Square, remember, and the ensuing cover-up, and the government has hounded outspoken artists such as Ai Weiwei. If you are a Chinese director trying to make a probing film about flaws in your homeland like, say, Jia Zhangke, director of “A Touch of Sin,” this can be a very hard wall to climb.

But so far, a Chinese Communist takeover of Hollywood — a panic for some on the political right — has not taken place. What’s happened so far is mostly a massive infusion of cash and a vast expansion of the movie audience.

Despite the outsize influence it exerts on Hollywood, China accepts only a handful of films for exhibition there. For what are called “revenue-sharing films” — movies where a non-Chinese studio earns a percentage of box office — Beijing allows only 34 films total, from all foreign nations. (The vast majority tend to come from the U.S.) Another few dozen American movies comes through a flat-fee arrangement, and some joint productions between Hollywood and China — a growth area — enter as well. Because China produces its own comedies and romantic dramas, and since these genres tend to be culturally specific, it doesn’t need those types of films from the U.S.

“What the appetite is for, whether a small cinema built in the '50s or an IMAX theater, is action, sci-fi, and fantasy movies,” said Tom Nunan, a longtime Hollywood executive and UCLA lecturer who won an Oscar for producing the movie “Crash.” “They are consuming these movies from the United States hand over fist. They love men in tights.”

The film quotas, most observers suspect, are less about keeping China morally pure than about protecting the strength of its homegrown movie industry, which turns out about 800 films a year, an amount second only to India’s Bollywood. But with Chinese regulators, it’s hard to know what’s really on their minds.

In any case, the process of working to create one of those anointed films and engage a large box office once inside China is a far more decisive force than government censorship. "It just requires special handling, and a respect and understanding for the rules," Squire said.

So important is the Chinese movie market to American studios that some films will simply not get made if they don’t have a chance of playing there: A movie that costs more than $60 million to produce will simply die in a green-light committee if it’s unlikely to screen in China, Nunan said.

The films accepted for exhibition enter a world with its own rules and patterns. “Star Wars: The Force Awakens,” a record-breaking blockbuster in the U.S., did not do nearly as well in China, likely because of its lack of Asian talent. The appearance of Harrison Ford’s Han Solo provided no nostalgic thrill there, and Chinese audiences did not recognize Adam Driver from his role in “Girls.”

The next “Star Wars” film will be different. “So ‘Rogue One’ has major Asian stars — as big as Brad Pitt is here,” Nunan said. And it has martial-arts sequences, in the Asian tradition, in a way previous “Star Wars” movies didn’t.

Some American actors, though, do very well in China. Tom Cruise, Robert Downey Jr. and Matt Damon are beloved; this past summer's “Jason Bourne” was a bigger hit in China than it was here. So far, though, Chinese audiences have not responded the same way to black or Latino actors. A Chinese movie poster for “The Force Awakens” left out one of the movie’s leads, John Boyega, who is black and British. “I don't want to say ‘racism,’” said Nunan. “But they’re completely unfamiliar with embracing non-Caucasians.”

Chinese financiers and filmmakers are also making an impact in Hollywood in a more direct way: By buying up entertainment companies. Chinese investors own part or all of Lionsgate, Studio 8, Ron Howard’s Imagine Entertainment and the AMC cinema chain, and they may soon own part of Paramount. The purchase of cinemas in particular has caused concern in Washington that China is swallowing the movie industry: A letter last week from 16 members of Congress, suggested that a backlash may be developing.

The investment allows Chinese investors to not only take a financial stake, but to learn how Hollywood does things. “You’d think they could do it themselves,” Nunan said. “But the United States stands for innovation. And China does not. There are exceptions, but they are Microsoft to our Apple.”

So China is getting deeper into American movies from both directions and will soon be making its own films aimed at the U.S. audience. (Zhang Yimou, who once made films critical of Chinese culture, many of then starring Gong Li, is planning a large-scale action movie with Matt Damon.)

So far, at least, the brutal censorship that some have feared from China has not taken place, though it’s certainly substantial in the country's native film industry. “The role of censorship is constantly debated,” said Patrick Frater, Variety’s China correspondent. “I’ve seen film directors onstage literally crying about it.” And a few American directors have been frustrated: Quentin Tarantino’s “Django Unchained” was originally let in, but required 11th-hour trims that removed some very violent scenes.

Chinese regulators are increasingly working with American distributors to take the agony out of the system. “So there’s less of a surprise, less of an abrupt ‘yes’ or ‘no,’" Frater said. “The process is not going away, but it is becoming more flexible, more pragmatic."

The blockbuster action movies that generally open in China tend to have very little overt political content that would trouble Beijing, though they are sometimes recut for excessive violence, sexuality or superstition. (Because China sees itself as an atheist nation, movies about the supernatural have a hard time.) Chinese regulators recently discussed the importance of keeping China free of Western values, encouraging instead “positive energy.” Filmmakers, a government congress concluded, ”should also avoid putting stars, billionaires or internet celebrities on pedestals.”

So far, Squire has not seen serious censorship of American films coming to China. “In general, the sense is that it’s like the MPAA rating system — you need to please the regulators without compromising your artistry.” (Films that show in China, unlike in the States, are not rated differently by age group.)

It could all get much tighter and nastier in the future: A new regime in Beijing could become more repressive and less internationally minded than the current one led by President Xi Jinping.

And while it’s hard to know for sure, some in the film industry — producer Lynda Obst, for instance, author of the book “Sleepless in Hollywood” — argue that the Chinese-driven appetite for huge-budget action movies is further marginalizing midsize, character-driven films made for grown-ups.

But the reaction of most in the U.S. film world to China's emergence has been hopeful, crossed with a bit of confusion or uncertainty. Nunan, for instance, sees the history of Hollywood as the tale of various forms of technology saving the industry whenever finances sag, whether it’s TV licensing, the VHS player, DVD sales or streaming. This is the fist time, he said, that another nation is coming to the aid of Hollywood rather than a technological advance.

And this comes as the film industry has become more oriented to big, effects-driven superhero and comic book movies that are extremely expensive — often about $400 million — to make and market.

Frater sees a sometimes awkward relationship between China and Hollywood but thinks the two sides are starting to figure each other out a little bit better. “This is a $7 or $8 billion film market that has just emerged from nowhere," he said. "And it comes at a time when home video — DVD sales — have collapsed, and Europe is going backwards in terms of revenues. The arrival of China comes at a time when things were looking very worrisome. As in the wider economy, China and the United States need each other.”