Thoughtful writing elevates Netflix's new series, as fulfilling as it is relevant, into necessary viewing this fall 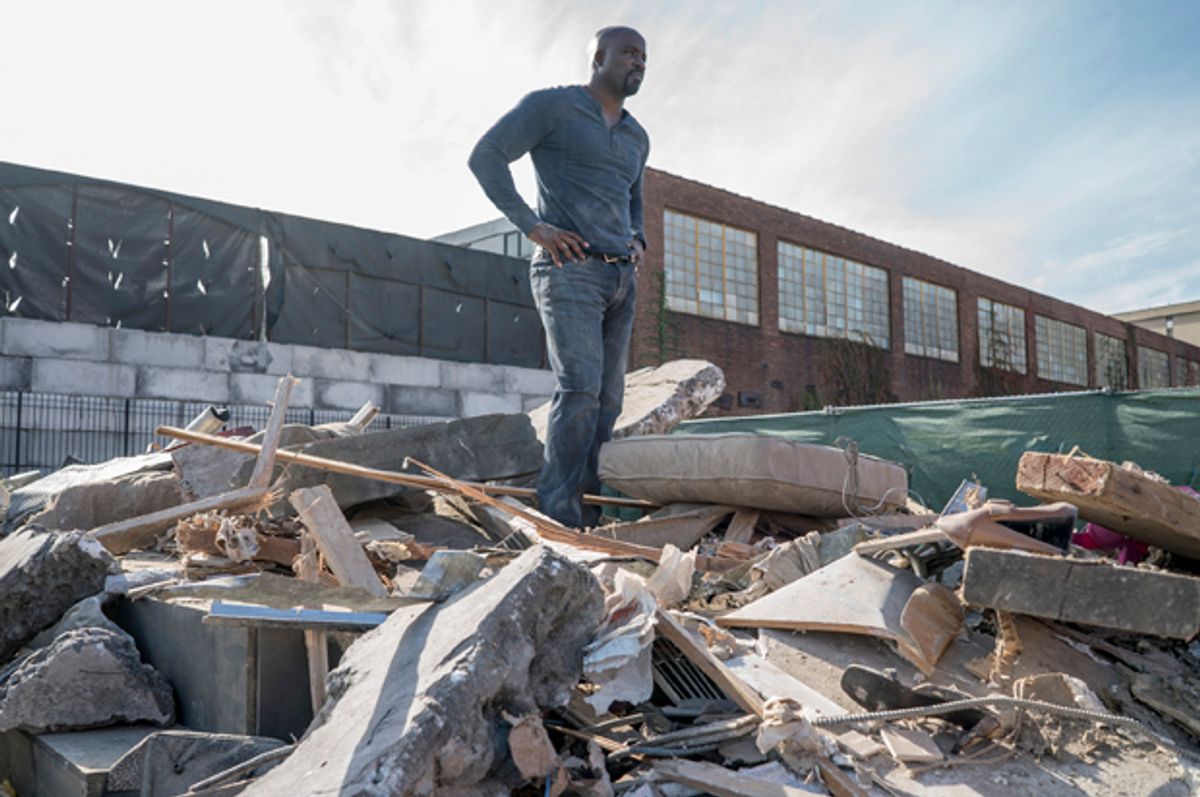 The word that best sums up Luke Cage, both the character and “Marvel’s Luke Cage,” the Netflix series dropping on Friday, Sept. 30, is cool. That's cool, as in the version of the term that is specifically African-American, the cool defined by strength, dignity and style, the one that channels generations of tragedy, joy, anger and perseverance into poetry, inimitable art and unstoppable music.

Cool is at the heart of black life and living, available in any number of shades and with various complexities. Series creator Cheo Hodari Coker uses “Luke Cage” to illustrate and play with all the elements of cool in his superhero series, celebrating the preciousness of black life as it's lived and viewed from the perspective of a black man in Harlem — one who happens to be bulletproof.

Throughout “Luke Cage’s” 13-episode first season, men with guns try and fail to fell the hero, played by Mike Colter, with a bullet or 10. They come at him from all sides wielding pistols and rage, and as Cage endures these showers of hyper-accelerated metal, Colter’s face hardens into an expression of forbearance, even fatigue. It’s as if he’s asking himself why it always comes down to the trigger and the clip; just as likely, he’s simply sick of having to replace his clothing, a complaint he brings up more than once.

As soon as his opponents’ clips are empty, Cage goes to work with muscle and fists, which he wields with brutal efficiency. He lacks fancy martial arts skills, but he gets the job done and goes right back to the business of living. That is, until the cry for justice sings out once more.

Think of all the unarmed black men and boys who have died by the gun, men like Terence Crutcher, Keith Lamont Scott and other names known to us, as well as those most will never hear about. Lives snuffed out by tiny pieces of metal traveling through flesh at 1700 miles per hour. I thought of them as I watched Colter standing defiantly in the bulletproof body of Luke Cage and experienced a churn of emotions. Is there even a term that describes the simultaneous feeling of wonder and pain?

As of this writing, Netflix is still dropping “Luke Cage” on Friday, Sept. 30, which is as it should be, although many an episode of broadcast or cable shows has been delayed or even pulled completely following news of significant tragedy. But one could make the grim observation that if Netflix were to follow this model of deference, “Luke Cage” would never see the light of day. The miserable horror behind those headlines is that there’s no sign that these senseless killings will cease any time soon.

Then again, Netflix’s model makes that idea somewhat moot by putting entertainment consumption into the hands of its users; we can watch as many episodes of its shows as we like, whenever we’re ready to. Or we can never watch them at all.

You should watch “Luke Cage,” of course, because the story takes the character beyond the simple constructs of comic book entertainment, making it about much more than a black man with unbreakable skin. This is a drama that examines the risk and value of remaining upright in a crooked world, and what can be lost when people disregard their place in history. “Luke Cage” is not a quick binge, but there’s something to appreciate in its 1970s noir-influenced pacing. As slow burns go, this one rewards patient viewing; if nothing else, it’s a music and film nerd’s dream, buoyed by Ali Shaheed Muhammad and Adrian Younge's original score. It’s incredibly cool.

Netflix’s entries into Marvel’s “Avengers”-related universe have made interesting divergences from their original comic book versions, and some of this is out of necessity. Cage, introduced to audiences as the main love interest in last year’s excellent “Marvel’s Jessica Jones,” originated on the page as a "Hero for Hire" in 1972. In Netflix’s version, he doesn’t charge for his heroism. He's also less interested in reconciling with his past, which includes a wrongful conviction and a stint behind bars, than in hiding from it.

As “Luke Cage” begins, the hero is content to make ends meet by sweeping floors in the neighborhood’s social hub, Pop’s Barbershop. Under the watch of Pop (Frankie Faison), the barbershop is a safe haven for the neighborhood kids as well as a gathering place. It serves the same purpose that actual barbershops do, in other words. For Luke, it’s the perfect hideout; nobody would guess that the janitor is a superhero.

Trouble always seems to find a super, though. Luke’s second job has him washing dishes at Harlem’s Paradise, the Cotton Club-style night spot that serves as a lair for the borough’s resident gangster Cornell “Cottonmouth” Stokes (Mahershala Ali, who also plays Remy Danton on Netflix's "House of Cards"). Eventually Luke gets drawn into a situation he’d rather avoid, making his employer at Harlem’s Paradise into his nemesis. But Cottonmouth has his own worries, in that his boss has saddled him with a quietly intimidating minder known as Shades (Theo Rossi).

More than a gorgeous setting, the deep blues of Harlem’s Paradise inform much of “Luke Cage’s” palette; it’s a place that feels classically dangerous and unpredictably new at once. Jidenna, Faith Evans and Raphael Saadiq are among the artists who appear on its stage, and a gigantic portrait of Biggie Smalls wearing a crown holds a central spot on the wall in Cottonmouth’s office.

Music and art, particularly that piece of art and the ’90s-era hip hop music that informed it, play important roles in this series, enriching each episode (every one named after a Gang Starr song) and adding a measure of force to the surprises held in store for the season’s later episodes. A great deal of Harlem’s history and popular fantasies about the place insinuate themselves into  the psychological layers of the show's characters as well. Ali stupendously plays Cornell as an unflappable man with ice in his veins, but he holds a regard for music in the way that only a person with thwarted creative aspirations does. If he’s the walking dream deferred, he’s made peace with it by supporting his cousin Mariah Dillard (Alfre Woodard, in an initially understated performance), a politician with her own ambitions.

Crime has a way of defying orders, even those imposed by criminals higher on the food chain. And eventually Luke realizes that his desire to hide his abilities is vastly outweighed by the good it can do. His efforts also earn the unwanted attention of local detective Misty Knight (Simone Missick), who is curious about this man who keeps on popping up near crime scenes.

Coker wrote the first two episodes of the season, molding Luke into a figure informed by gallantry and humility even before he puts on the mantle of struggle and justice. (The fact that Luke wears hoodies is a detail as subversive and defiant as the street sign marking Malcolm X Boulevard shown clearly in the credits.) And the way that Luke comes to understand that he’s a symbol of courage, that the act of standing out and stepping up is too rare and incredibly brave, is powerful to witness.

Real television footage has shown far too much proof that black people are not impervious to pain, violence and bullets. This either could make watching “Luke Cage” too much for some to bear, or offer the balm of escapism through power fantasy.

But the flood of intricate artistic details coloring in every episode, as well as its thoughtful script and compelling performances, elevate “Luke Cage” into an immersive viewing experience that’s as sensually fulfilling as it is relevant. There aren’t many new shows this fall that merit the designation “necessary viewing.” The undeniably cool “Luke Cage” does so, meaningfully.