My mother and Trump's border: America has been through this "extreme vetting" before 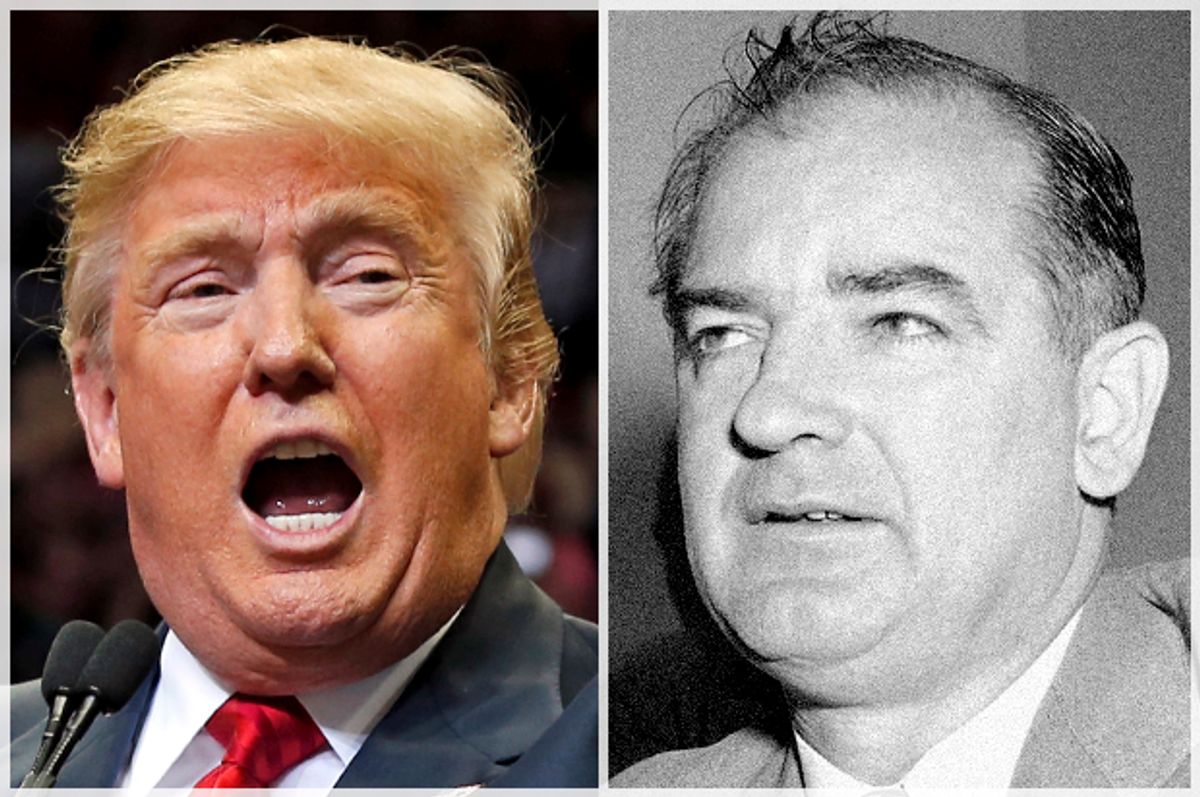 Donald Trump, reacting to the recent terror attacks, called on the government and law enforcement to fight, McCarthy-like, the “cancer from within.” He then went on to exclaim: “How they came into the country in the first place is beyond me.” Obviously, he believes that these and thousands of other possible (and according to him, inevitable) assailants did not undergo the “extreme vetting” that he proposed as indispensable to keep Muslim terrorists and those advocating Sharia law from entering the United States. Whether this prospective weeding out of aliens antagonistic to American values at the border would bolster our security is doubtful.

A long time ago my mother, Fanny Zelicovich Dorfman, who, alas, has not been alive for some 20 years, fell afoul of a system of interrogation similar to the one the Republican candidate wishes to put into place. Her story might provide a sober perspective on the pitfalls and traps that such examinations entail.

Though Fanny would later recount her detention by immigration officials lightheartedly, as was her wont when tragedies descended upon the family (and they were many), there was nothing amusing about the episode when it occurred.

My sister and I found out about my mother’s mishap when, on the last day of our stay at Camp Tevya in Massachusetts — it must have been some time in late July or maybe August 1953 — my parents did not turn up to retrieve us. Instead, my father had asked some nearby friends in Boston to take care of us while he sorted out the mess my mother found herself in.

The problem started because my mother, having accompanied my dad on a trip to Europe that summer, decided not to fly back with him but take a leisurely boat ride to the States, where our Argentine family had resided for the last nine years, most of them with a diplomatic visa, as my father was a high-ranking official of the United Nations. Which meant she was by herself when she confronted the immigration authorities.

They had begun by asking her the usual questions about her name (are you now or have you ever been known by any other legal names?), address, resident status and then, perhaps emboldened by the McCarran Act that had been passed the previous year despite President Truman’s veto, went on to probe other aspects of her identity.

“Are you now or have you ever been a member of the Communist Party?”

Simple for my mother to answer that. She rarely disagreed with my father about anything, but regarding communism had demurred from his fervent Bolshevik sympathies, though always did so gently, and with humor. At the dinner table she would announce, with a mischievous twinkle in her eye, that she had founded an organization, the SRCLCommunist Party — the Slightly Reformed Conservation Life Communist Party — of which she was the chairman, secretary, treasurer and sole member. So she answered, truthfully, that no, she was not currently nor had she ever been a member of the totalitarian group that the immigration functionaries were seeking to exclude from America.

“Do you advocate the overthrow of the government of the United States by force or subversion?”

The question was ridiculous, but my mother bit her tongue. She did not tell them that she loved many things about America (she adored Roosevelt), to the point of having contemplated becoming a citizen, but that the Red Scare, the House Un-American Activities Committee, Joseph McCarthy’s quest for ideological purity, and the hounding of her own husband and many friends now made the country unpalatable, so much so that we were already planning to move to Chile. But what was the point of getting into an argument with these people?

And then came the clincher:

“Do you intend to assassinate the president of the United States?”

My mother could not help herself. She laughed at the absurdity of the question; all she wanted to do was get off the boat and join my father and drive north to pick up her two kids. She thought a jest might lighten the proceedings.

“If I was going to assassinate the president, would I tell you?”

Confident that her charm — which was indeed prodigious — would get her through any thorny situation, she was surprised when they blocked her entry to the United States and sent her to Ellis Island for further investigation of her subversive and possible lethal activities. Her protests that she had been joking were met with a grim response: “This is no laughing matter, Mrs. Dorfman.”

Family lore and her own storytelling aptitude — always ready to augment any incident to epic proportions — has it that she spent three nights and days in detention, but my guess is that it was not more than 24 hours. What is true is that the Secretary General of the United Nations, Dag Hammarskjöld, had to intervene personally to convince the United States authorities that Fanny Zelicovich Dorfman was no threat to the security or future of the nation nor to the health and well-being of its president.

Sixty-three years later, as we endure another era dominated by fear of what is foreign and different — Muslims instead of Reds as the enemy, Sharia Law instead of doctrinaire Marxism as the target — my mother’s encounter with those inquisitors and their queries offers anecdotal proof that the form of extreme vetting proposed by Donald Trump, besides being unconstitutional, would end up snaring innocent people like her at the border while letting seasoned criminals slip by undeterred. Those who are truly determined to wreak havoc will undoubtedly hide their objectives (or did they not undergo extensive training?), and those who are naïve enough to believe that making a joke about our current paranoia will be delivered unto the inefficient hands of Homeland Security.

And that, in effect, is no laughing matter.