Rebooting Hillary: How Clinton can win the digital war and make the debates great again

Bernie Sanders head of digital advertising explains what Hillary Clinton needs to do beat Trump at his own game. 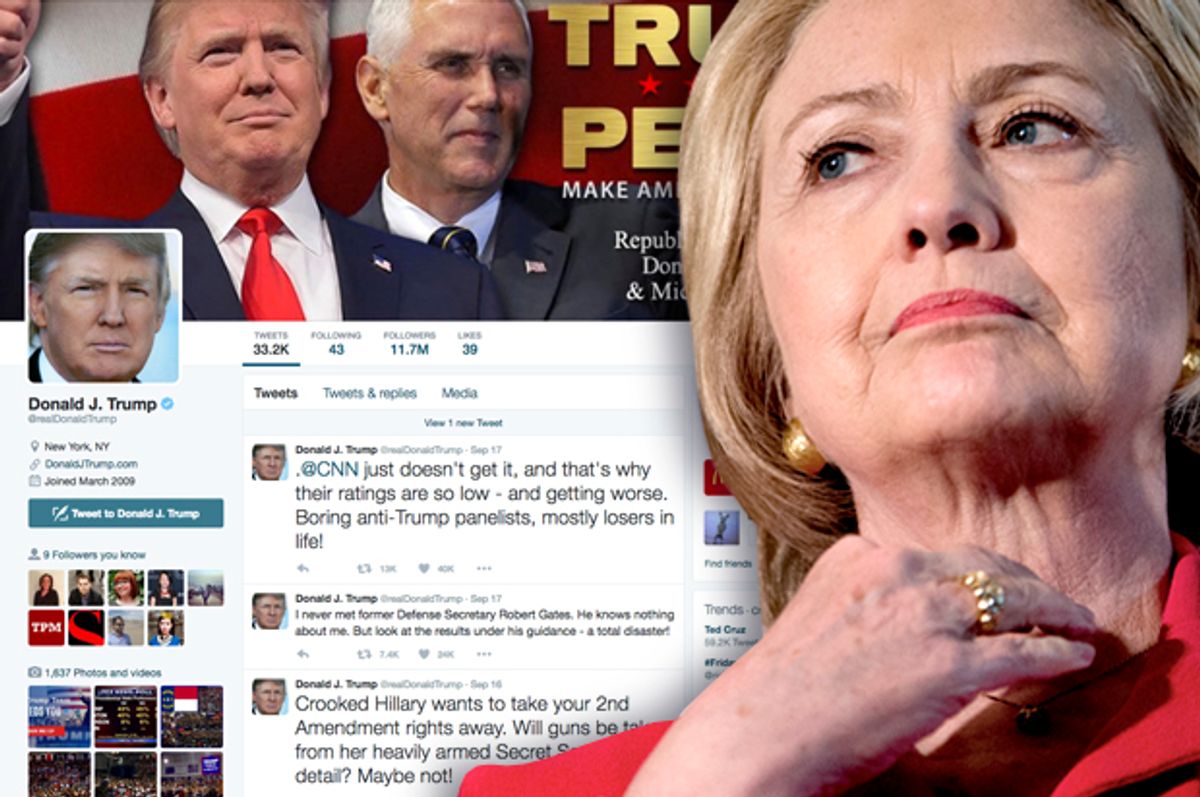 “I was totally against the war in Iraq.”

It was the lie heard around the world at the Commander-in-Chief Forum earlier this month. But moderator Matt Lauer failed to rebut Donald Trump’s claim with any of the bevy of evidence available to prove the statement false. It was an enormous blow to have this statement go unchecked, but campaigns can’t control the moderator and need to focus on what they can control. The narrative coming out of the first presidential debate will dominate the news cycle and could set the tone for the final stretch of the campaign. One hundred million people may watch Monday’s debate. If we want to ensure Donald Trump doesn't get away with lying at the debate, a huge (yuuuge?) digital ad presence will be needed.

Clinton has assembled one of the best teams in modern politics, is raising hundreds of millions of dollars, and has well-funded allies running independent expenditures on her behalf. Yet in key battleground states she is running neck and neck with a reality TV star who bankrupts businesses, incites racial violence and thinks America will be great as long as we have a giant wall on the border with Mexico. Why is this? Because Trump is a master of media, and has proven wrong anyone who ever doubted the adage “any press is good press.” The world of media has completely changed. When running against a non-traditional candidate such as Trump it’s clear the TV ads are not working.

Trump’s source of power — the reason he can bypass advertising altogether — is social media. The formula is simple. He posts something outrageous and gets millions of dollars in free media again and again. It doesn’t matter if he contradicts the facts or even himself. He plays the media for fools, and then benefits from all the stories explaining how he is playing them for fools. TV advertising can’t come close to competing with the attention that Trump’s free media is garnering. To compete, the Clinton campaign needs to do its best to disarm Donald Trump — it needs to spend millions in social media and search advertising to reduce the effectiveness of Trump’s key weapon.

Over the last five years TV viewership has plummeted among those under 49. Those who are watching TV are more distracted than ever because of the second-screen effect. Clinton’s campaign missed out on a golden opportunity to embrace the second screen during the Olympics. They made major TV buys and the spots were great, but they failed to match that with major digital advertising to reach the millions of Americans that use social media while watching the Olympics. In today’s very noisy media world, you have to plan to promote your content if you want the right people to see it. You can’t just assume that because a D.C. reporter tweeted out praise around your hard-hitting video, that a critical undecided voter in Ohio saw it.

TV ads still do work, but their effect is greatly diminished from 2012. Yet most campaign consultants rely on the decades-old “truth” that buying 1,000 points of television ads is what you should do to persuade someone. The commercial space has drastically changed how they advertise, but the political world is stuck in the ’90s. As the Director of Digital Advertising for Senator Bernie Sanders’ campaign, I oversaw more digital advertising than any other 2016 campaign and more than all the 2008 campaigns combined. Those investments gave us the edge we needed to make up for an enormous gap in name recognition and establishment support, ultimately winning more votes from young voters than Clinton and Trump combined. However, according to the latest reports filed with the FEC, Hillary for America has spent just $11.6 million on digital advertising — that's less than 10 percent of its paid media budget. This is a far cry from commercial spending on digital, which is nearing 50 percent. Clinton’s lopsided spending on TV is compounded by recent polling that makes it clear that her problem in states like Ohio is a generation gap -- and not the generation that still watches TV. Voters 18 to 34 years old will most likely decide the fate of this year’s presidential election.

After several days of media focus on her longstanding problem appealing to young voters, the Clinton campaign just announced they are reserving $30 million in digital advertising placements. While one could say that should have been done long ago (it should have!), this is good news. Now Clinton’s team must put this investment to work -- starting with Monday's first presidential debate.

Digital advertising is now vital to a candidate’s overall debate game plan. While we were able to take advantage of Clinton’s 20th-century media tactics numerous times during the primary, the debates, in particular, gave us an opportunity to make sure Sanders' message was being seen more than Clinton’s. Starting with #DebateWithBernie in the first Republican debate, and in every Democratic debate after that, we used rapid response Twitter, Facebook and Google search ads to help amplify Sanders’ performance and complement more traditional fact-checking being done by the communications team. It takes a great deal of planning: setting up ad placements in advance, creating infographics, videos and other creative products on the issues or lies you anticipate will be addressed. All of this must be closely coordinated with the email and digital fundraising team as well as the communications team. This immense preparation and coordination is what frees up the capacity to recognize and take advantage of the unexpected key moments in real time. These key moments can shift an entire narrative, raise millions in grassroots donations, and energize voters.

With Trump on the stage, fact-checking will undoubtedly be a critical component of Clinton’s debate plan. A large investment in digital ads during the first debate could counter the lies more than any organic efforts. For one thing, trust in media has plummeted in recent years. For another, the way we access news is more fragmented than ever. Then, there's the fact we are in a situation where it doesn’t matter how much the media says Trump is lying. The best way to counter a lie is to make sure someone witnessing it is presented with the truth as quickly as possible (like in their Facebook or Twitter feed during the debate), or when they search on Google to see if a particular claim or statement is true that they are presented with the truth in as noticeable a spot as possible (like the spot reserved for ads).

Of course, it's not enough to not be Trump — Clinton has to share her vision for the future as well. As with Sanders, Clinton’s most compelling message is that the deck is still stacked for those at the top. I believe the first debate will be a perfect opportunity to outline her plan for fixing this. By communicating the facts and consistently and authentically reaching out to voters where they spend time (on their smartphones, of course), Clinton can make that much needed connection with younger voters and win this election. And America needs her to do just that.

Keegan Goudiss is a partner at Revolution Messaging, leading the digital firm's award-winning online advertising for progressive issue and political campaigns. He served as director of digital advertising for Bernie Sanders' 2016 presidential campaign.