Trump's speeches this week had a common theme: African-Americans don't deserve the same rights as whites 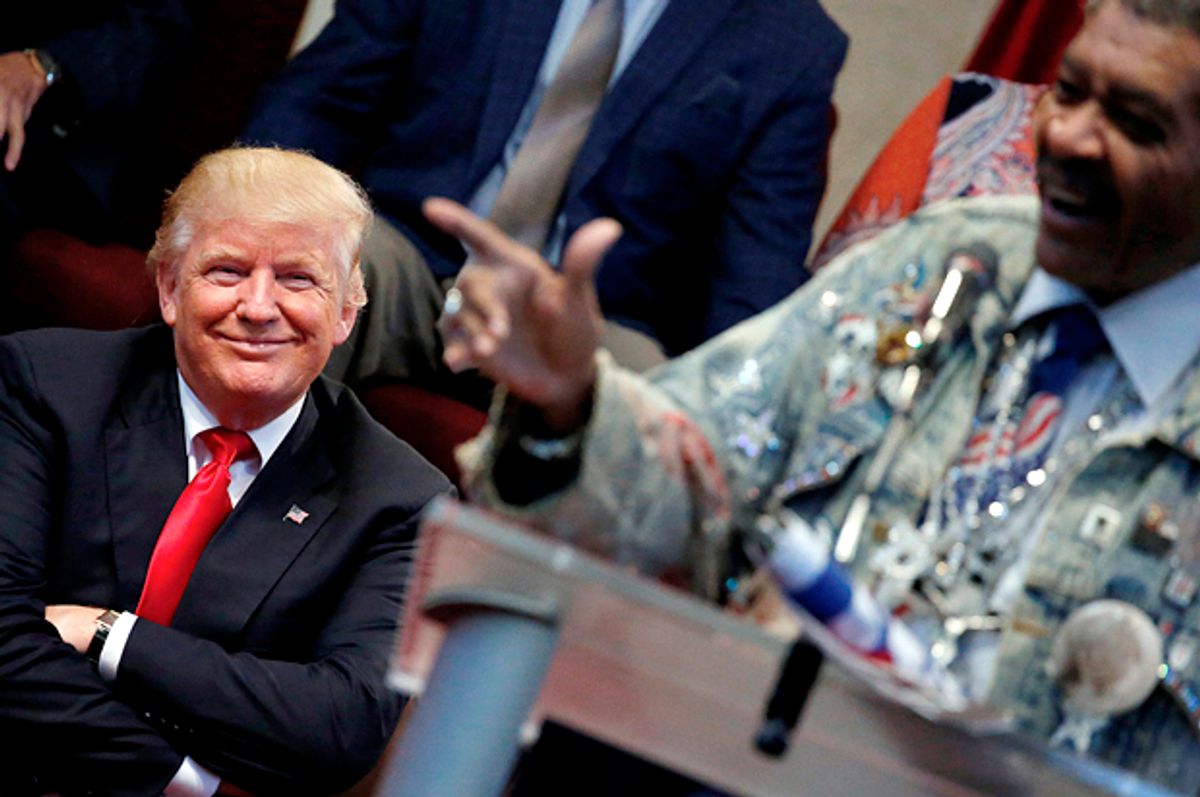 Donald Trump's "outreach" to black voters is a farce. Luckily, the mainstream media is beginning to clue into the fact that when Trump speaks about black people, the message is about reassuring his white supporters that they aren't really racist, more than trying to win over black voters.

On Tuesday, Trump gave a speech in North Carolina — at the same time that protests were erupting in Charlotte after police killed Keith Lamont Scott, a 43-year-old black man who had nothing to do with the warrant they were serving on someone else — where he painted, for his nearly all-white audience, a picture of black life that was rooted in racist caricature rather than any known facts.

"We're going to rebuild our inner cities because our African-American communities are absolutely in the worst shape they've ever been in before. Ever, ever, ever," Trump told the crowd in Kenansville.

"You take a look at the inner cities, you get no education, you get no jobs, you get shot walking down the street. They're worse, I mean honestly, places like Afghanistan are safer than some of our inner cities," he continued, adding the claim that his numbers with African-American voters are "going, like, high."

It hardly bears mentioning that every word of that is a lie. Trump's poll numbers with black voters are hard to nail down, but overall, they are lower than those of any Republican nominee since 1948.

More importantly, as other journalists have detailed, Trump's claim that black communities are "in the worst shape they've ever been" is flatly a lie.

As President Obama joked, "He missed that whole civics lesson about slavery or Jim Crow." Even in more recent years, data shows that for black Americans unemployment is down, poverty is down, incomes are up and education levels are rising.

As Zack Beauchamp painstakingly detailed at Vox, Trump supporters are primarily motived by a desire to reassert white male dominance over the culture. So why does Trump even bother with this feigned concern for the well-being of black people?

What he's really pushing is an old and ugly narrative: Black people are incapable of handling responsibility and therefore need white people to control them. You know, for their own good.

As a feminist writer, I've frequently encountered a similar narrative coming from anti-feminists. The right-wing press is forever publishing articles arguing that feminism has made women unhappy, and that we were all so much happier when we didn't have to deal with the stresses of equality with men.

In other words, it's an argument in favor of female inferiority. No one disputes the idea that men are capable of "having it all" — that men can handle the responsibilities of a job and a family — but women are viewed as too delicate to put up with the scary world outside the white picket fence.

It's the same narrative that Trump is using on black people: OK, we tried it your way and let you have some equality -- and look where that got you! Now it's time to return to a system where you are subservient.

The same assumptions informed Trump's comments about stop-and-frisk. "One of the things I’d do,” he told a mostly white audience in Cleveland Heights, “is I would do stop-and-frisk. I think you have to. We did it in New York, it worked incredibly well and you have to be proactive.”

Trump wasn't even trying to pretend that stop-and-frisk isn't a racially discriminatory practice, as some conservatives do — the speech was specifically focused on the black community and he was quite clear that he wanted to target predominantly black neighborhoods with these tactics. (Which, to be clear, don't work to reduce violence.)

"Beyond the weak substantive case for Trump’s proposal, there’s the audacity of a candidate who rails against moderate gun-safety reforms as civil-liberties violations -- but suggests that racially discriminatory police searches are an acceptable means of promoting public safety," Eric Levitz at New York Magazine wrote.

It's further evidence that Trump's underlying narrative is: White people should be allowed rights and power, but not black people, because, in Trump's view, they can't handle the responsibility.