Big data wants your tweets: What is Salesforce.com and why is it crushing so hard on Twitter?

Twitter just keeps on losing money, but the data freely shared by its 300 million users make it very valuable 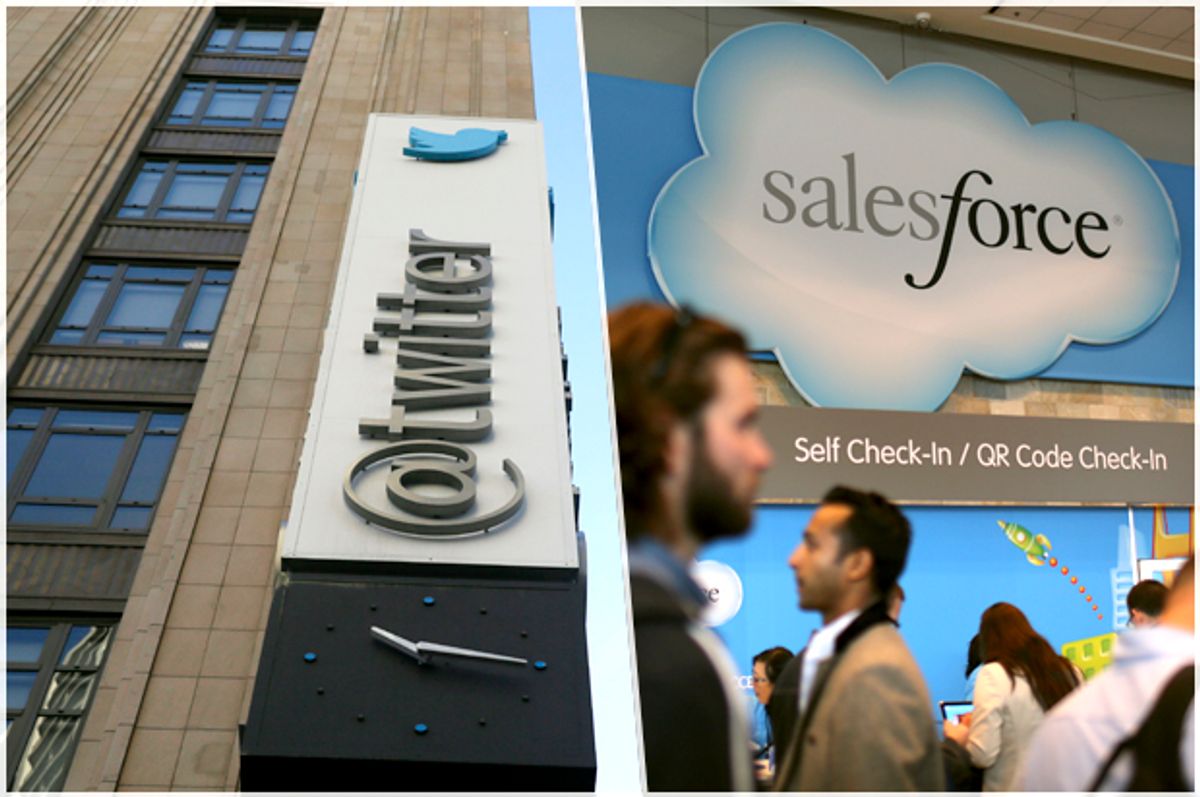 You know Twitter’s profile: The influential social network has a huge number of active subscribers, but it’s never been able to figure out a way to profit from them. Now the San Francisco-based company led by CEO Jack Dorsey is reportedly shopping itself around.

“Twitter has struggled to take all of that data that is has around the consumer – it has over 300 million active users – and actually use that and apply it in a way where it actually can turn a profit,” Jack Mohr, chief investment strategist for financial news site TheStreet.com told CBS News. Last year, Twitter reported losses of $512 million on $2.2 billion in sales. The company hasn’t turned a profit since it was founded in 2006.

This stream of losses may be too much for the company to handle. While neither Twitter nor its rumored suitors are commenting, news that Twitter could be taken over by a company capable of bringing it to profitability sent its stock price up 19 percent to $22.22 per share — its largest one-day leap since its November 2013 initial public offering.

Among the companies reportedly in the hunt are well-known media giants CBS, Walt Disney, Comcast and Fox, all of which could use Twitter for news distribution, media analysts told the Financial Times. Anonymous sources who spoke with CNBC on Friday suggested Google owner Alphabet was looking at Twitter to give Google a social-media network that people actually use after years of its own failed starts.

“It's the way to be able to get a seamless customer relations management among big customers who want to be in touch 24/7,” said Jim Cramer, host of CNBC’s “Mad Money.”

Salesforce.com already uses Twitter’s Firehose service with its new artificial intelligence Einstein platform, according to Reuters. The platform takes access to all Twitter traffic and condenses it into channels to measure consumer sentiment about brands. That data, largely extracted by software, is then sold to Saleforce.com clients — which include American Express, Canon and Delta Air Lines, according to its website — to help them improve their relationships with and marketing to consumers.

Salesforce.com, whose co-founder and CEO Mark Benioff is one of the most powerful leaders in Silicon Valley, has emerged as a $45 billion major player in the cloud-computing space. Last year the company tied with Google as the fourth-largest cloud-computing company in the world, behind IBM, Microsoft and Amazon.com, which controls nearly a third of the market. Acquiring Twitter would give Salesforce.com an edge over Google in the cloud business. So if there’s a bidding war over Twitter, don’t expect Google to back down easily.

Previously, Salesforce.com had shown an interest in acquiring LinkedIn, but it lost out to Microsoft, which bought the professional social-networking company for $26.2 billion in June. Clearly, Saleforce.com is looking to acquire a major player in the social-networking space, and Twitter, with its losses and all, could be the perfect match.