It's science, stupid: Why do Trump supporters believe so many things that are crazy and wrong? 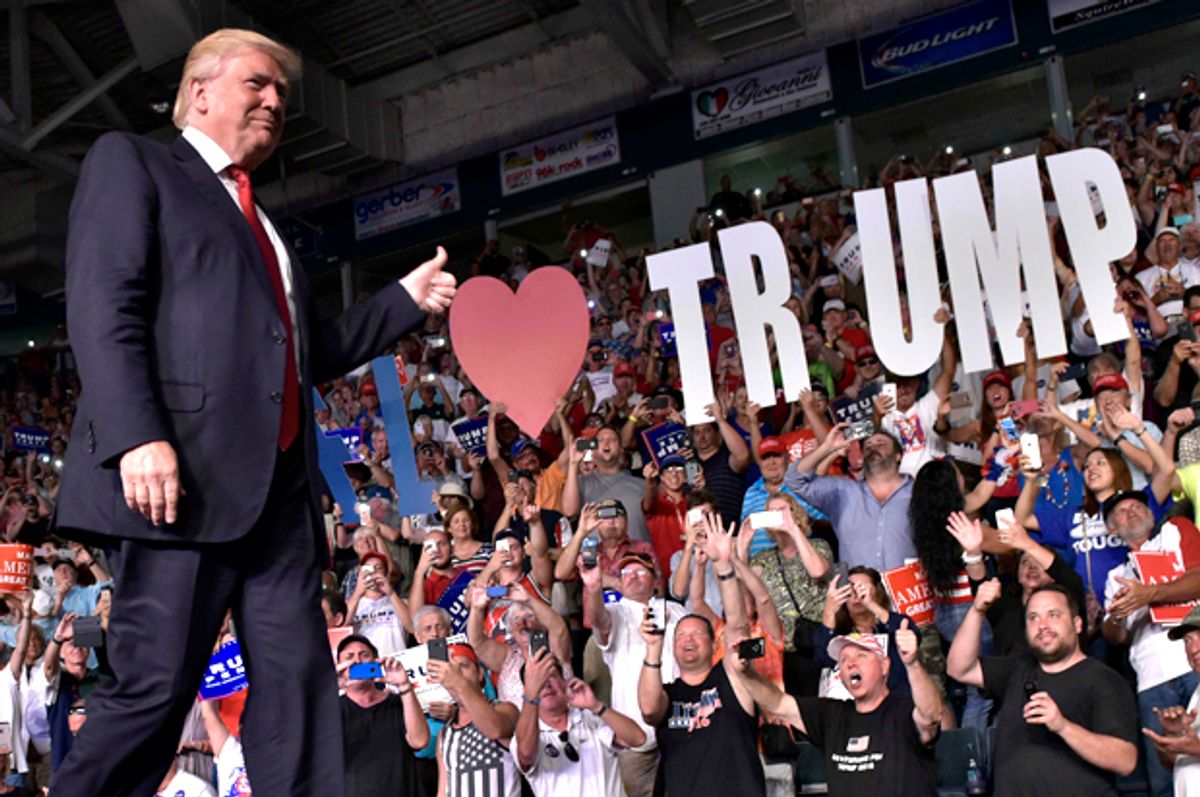 Last week, The Daily Show's Jordan Klepper went to a Donald Trump rally to interview the spray-tanned oaf's supporters about some of their more fantastical beliefs. The results were bizarre, even by the standards of a presidential campaign that long ago broke the wacky-meter.

Trump supporters suggested that Hillary Clinton had multiple sclerosis, Parkinson's disease and even AIDS, and was using a body double to conceal her ill health from the public. They also dug into birther conspiracy theories about President Obama.

One man even ranted that, "Barack Obama had big part of 9/11," because he was "always on vacation, never in the office." (Pro tip: Barack Obama was not president when 9/11 occurred.)

To liberal viewers, this whole display is boggling. These folks clearly are competent enough to dress themselves, read the address of the rally and show up on time, and somehow they continue to believe stuff that's so crazy and so false that it's impossible to believe anyone that isn't barking mad could believe it. What's going on?

"There definitely are conspiracy theorists. There definitely are facts where people have fundamentally misinformed beliefs. But there are also propositions that they’ll affirm for a display purpose," Dan Kahan, a Yale professor of law and psychology explained to me over the phone.

Kahan also works as a researcher and educator for the Cultural Cognition Projection, where researchers look into "the tendency of individuals to conform their beliefs about disputed matters of fact ... to values that define their cultural identities." The project looks at issues, such as climate change or vaccination safety, where huge swaths of people stubbornly reject scientific facts, because those facts don't conform to their worldview.

There are a couple of reasons that people might embrace flatly false beliefs like the ones on display at this Trump rally, Kahan explained to me. One explanation is that they sincerely belief these false things.

"People have a stake in some position being true," Kahan said, "because the status of their group or their standing in it depends on that answer."

"But then there are other things that people will say because that’s kind of like a declaration of who they are," he added. "Part of the reason they might be doing it is because they know it’s really going to get an aversive response from people who have an alternative identity and who know that’s the true answer."

With birtherism, Kahan continued, there are people who actually believe that Obama is hiding the facts of his birth, but there also a lot of people who are saying that more because it's a "kind of a middle finger" and because it gives conservatives pleasure to drive liberals batty by saying these things.

As evidence, Kahan pointed to a paper by published in Public Opinion Quarterly in 2014 that found that minor changes in survey wording found very different rates of birtherism in the public.

With some questions, researchers hypothesized, "respondents might have viewed this question as constituting a quiz to assess whether they were well informed about political facts," leading Republicans to be more inclined to admit that Obama was born in the United States.

Other questions, however, might have been viewed "as offering them an opportunity to express anti-Obama sentiment by challenging the legitimacy of his presidency." In these cases, aligning one's self with birtherism was less about actually believing the president was born in Kenya, per se, and more about expressing one's racism and hostility towards liberals.

It's not exactly lying. It's more that the truth is secondary to the goals of expressing political views and antagonizing liberals by staking out these positions.

This distinction might explain some of the positions that Trump supporters staked out in the Daily Show video.

"I don't have any," one man told Klepper when asked for proof of his outrageous claims. "It's my opinion."

This, of course, makes liberals nuts, because whether or not Clinton has Parkinson's is not an opinion, but a matter of empirical fact. But folks who say things like this are "telling you something about this belief," Kahan explained.

"It’s not even a matter of fact for them," Kahan continued, noting that some beliefs, "by their essence, defy empirical assessment."

"Do I have proof? No. Do I have articles? No," one woman in the Daily Show interview proudly declared. "My mind is made up."

"I think at that point someone’s just telling you that it’s some kind of performance,” Kahan said.

This no doubt goes a long way towards explaining how on earth it is that Trump is considered more honest and trustworthy than Clinton by voters. According to Politico's fact-checkers Trump tells a lie an average of once every three minutes. Clinton, in contrast, was rated by Politifact as the most honest candidate in either party in this year's primary season.

For a lot of people, a candidate's adherence to empirical facts isn't really relevant to their estimation of how honest they are. "Honest" is more about a tangle of beliefs, stereotypes and wishful thinking than about the facts on the ground.

The fact that Clinton is female, for instance, works against her, since she's carrying hundreds, possibly thousands of years of misogynist stereotypes about women's mendacity as baggage. Many people have a kneejerk belief that ambitious women are inherently conniving and deceitful, and that is more powerful than actual facts in shaping perceptions of Clinton's honesty.

On the flip side, Trump's willingness to thumb his nose at "political correctness" may not be fact-based, but it is blunt, and that often gets confused with honesty by a lot of people. Conservatives aren't wrong to think that a lot of people believe racist or sexist things, but fear to say them out loud for fear of social censure. Trump throws caution to the wind and says the foul things that many people fear to say out loud, and that makes him seem "honest" in their eyes, even though he literally struggles to make it through five minutes without telling a lie.

None of this means that facts don't matter. But in understanding why people believe the things they do or say the things they do or vote the way they do, facts matter less than things like identity, values or what social circles people run in. That Trump can lie his head off, day in and day out, and never lose the support of his fans is just further evidence of what social science has been demonstrating for years.