LePage's binder, said to contain all arrested drug dealers in Maine, only showed 37 percent were black or Hispanic 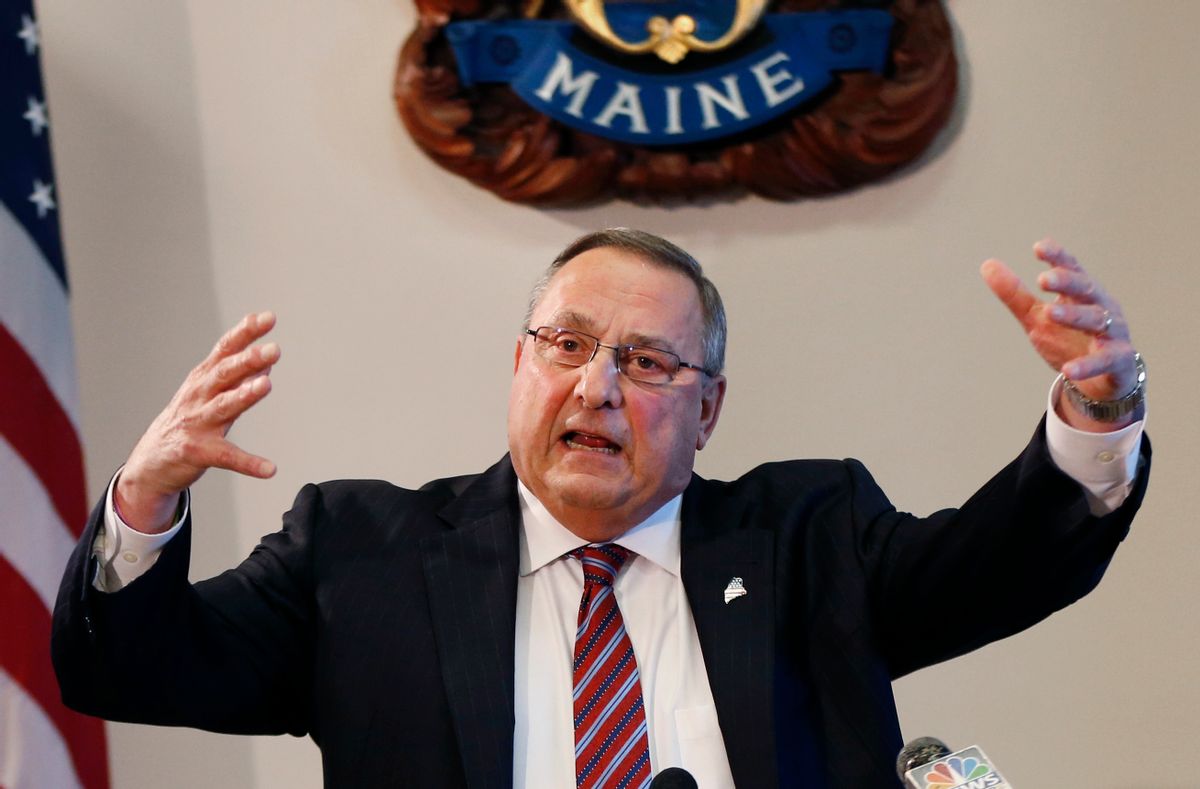 Maine Gov. Paul LePage once complained that black and Hispanic drug dealers from New York and Connecticut were invading his state to “impregnate” white women. He later insisted his office had a binder filled with photos of drug dealers — and that 90 percent of them were black or Hispanic people— to prove it.

A binder exists. But like the snow that blankets Bangor streets every winter, it’s incredibly white.

The national media excoriated LePage in January for saying drug dealers with names like “D-Money, Smoothie, Shifty” were flooding the state and impregnating white women.

When LePage was asked about his inflammatory statements at a town hall forum last month, the embattled governor doubled down.

“I don’t ask them to come to Maine and sell their poison, but they come and I will tell you that 90 plus percent of those pictures in my book, and it’s a three-ringed binder, are black and Hispanic people from Waterbury, Connecticut, the Bronx and Brooklyn,” LePage said at the event.

LePage apparently kept the binder to reinforce his belief that members of racial minority groups were responsible for the state’s heroin epidemic. “I made the comment that black people are trafficking in our state. Now ever since I said that comment, I’ve been collecting every single drug dealer who has been arrested in our state,” LePage said at the event.

The American Civil Liberties Union of Maine immediately put in a request to review the binder, citing the state’s open records law.

After studying the contents of this infamous three-ringed binder, the Portland Press Herald reported that only 37 percent of the alleged suspects and criminals represented in the binder were either black or Hispanic, as opposed to the 90 percent LePage swore by last month.

The conservative governor, who is quite liberal when it comes to rounding up numbers, has been called a racist by local and federal lawmakers.

In response to one state politician's charge of racism, LePage left the lawmaker an expletive-filled voicemail and said he wished to duel the man.

“I would like to talk to you about your comments about my being a racist, you [expletive]. I want to talk to you. I want you to prove that I’m a racist," LePage said in the voicemail.

Now the people of Maine just have to reference LePage's big book of drug dealers to prove their governor may be a small percent racist.

The contents of the binder can be found below, courtesy of the Portland Press Herald: