Of course gender is a factor: Being a woman is still Hillary Clinton's biggest liability

A lot of Americans think sexism is over because a woman got the Democratic nod for president, but they're wrong 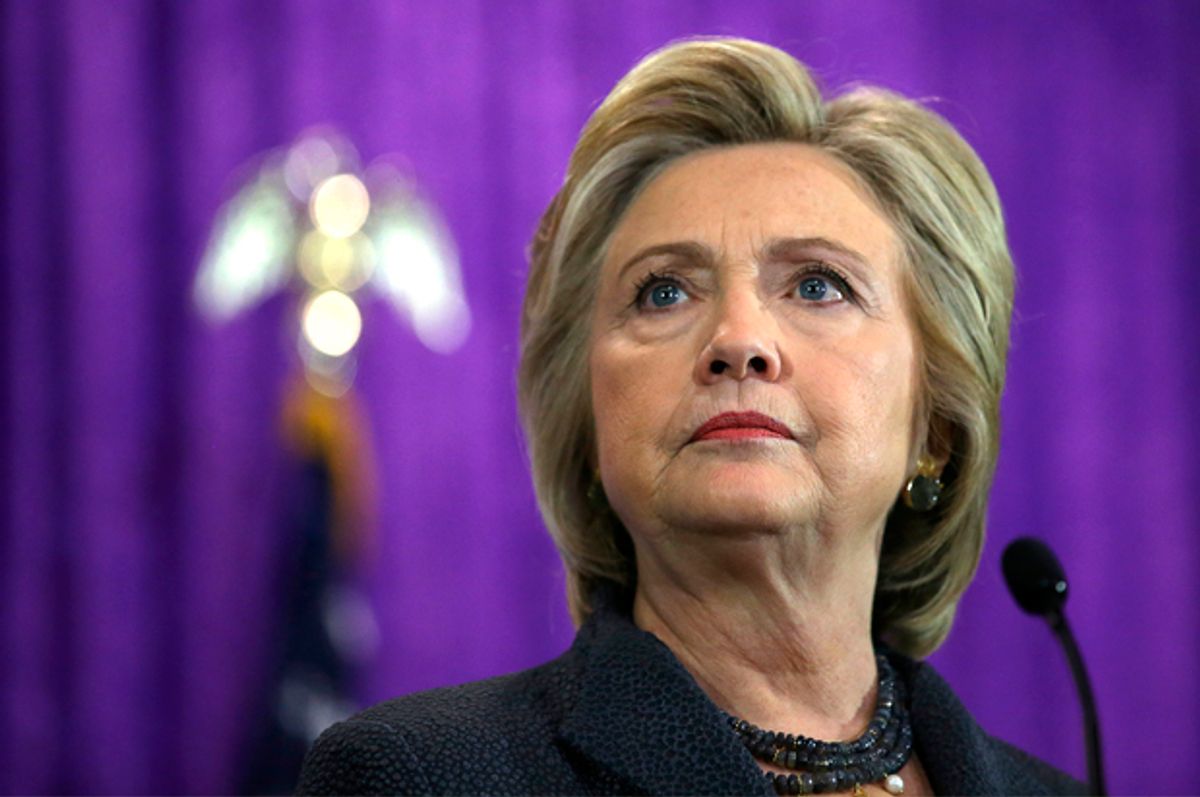 Sexism and misogyny in American politics: real or Bigfoot? For a good chunk of the electorate, sexism is a feminist fantasy, and the irrefutable proof is the fact that Hillary Clinton is the Democratic nominee for president. These same people tend to argue that Barack Obama’s very existence means that anti-black racism is a liberal myth and E Pluribus Unum means God Save President Trump. After November, there's a good chance it will.

Tonight, however, the mythical beast called Sexism may peek out and show itself, as the fact of Clinton onstage with Trump may force unrealistic expectations to face the burden of the impossible paradox: a woman in public life. As imagined by writer Charles Clymer, Clinton is expected to not only meet but exceed standards that verge upon the surreal.

Hillary Clinton’s greatest political liability is simply that she is not a man. According to her Twitter bio, she is “wife, mom, grandma, women + kids advocate, FLOTUS, Senator, SecState, hair icon, pantsuit aficionado, 2016 presidential candidate.” Her list is both cumulative and compound.

Like rindfleischetikettierungsüberwachungsaufgabenübertragungsgesetz (the now-defunct German word for “law for the delegation of beef labeling”), each thing sticks to the previous bit, and none of it ever goes away. Once a mother, always a mother. Pantsuits excepting, same goes for the rest of who she used to be and who she currently is. But in Clinton’s alphabet self-portrait, “wife” comes first and “presidential candidate” comes last, highlighting the fact that society still expects women to fulfill traditional familial roles in addition to saving the world.

On Twitter, Rachel Held Evans (author of "A Year of Biblical Womanhood"), has been steadily pointing out the sexist double standards have applied to Clinton. “Don’t tell me ‘gender isn’t a factor’ when Hillary Clinton is more despised for being cheated on than Trump is despised for cheating,” Evans tweeted, on the heels of stating flatly: “So angry at evangelicals who support shaming Hillary for Bill’s affairs but shrug off Trump’s chronic infidelity. Hypocritical, sexist b.s.”

For many traumatized American women, this election season has felt like an extended immersion in collective public gaslighting. Mouths agape, they’ve watched as a manipulative and dystopian fantasy has swept half the country into a narrative more believable than any lived truth because reality has long been what a (white) man says it is.

Then, a miracle of sorts: #Laueringthebar, the hashtag that sprung up in the wake of Matt Lauer’s shoddy treatment of Clinton during NBC’s commander in chief forum. If nothing else, Lauer did the country a backhanded favor when he put unconscious sexism on display. By themselves, his dismissive attitude and repeated interrupting wouldn’t have been enough to convince true unbelievers that sexism was any kind of factor because it’s totally legit to hate on Hillary as a Clinton.

'Nuf said: being Mrs. Bill is a necessary and sufficient condition for partisan attack. But when Lauer not only failed to interrupt Trump but also maintained an attitude of rapt, even star-struck attention when Trump replied with his usual brand of fact-free gibberish, “EVEN the New York Times noticed,” noted Frances Legum sarcastically. “That’s pretty bad.”

In front of rolling cameras, Lauer’s interview confirmed what working women already know: The sexism that matters isn’t being called “honey” at the office or being leered at by your bosses. It’s fighting the perception that women are somehow naturally less competent than men then realizing that being good at your job and having professional ambitions is to invite mockery as a goody-two-shoes, a teacher’s pet (the Hermione trap) or, to put it politely, a freakish monster (pretty much every powerful non-princess female in a Disney film.)

Worse, working women also know that using logic to argue against these particular cultural assumptions is like trying to fight a congress of misogynistic monkeys by throwing circus peanuts at them. They just hoot louder and beg you to do it again.

So, how to respond when you’re fighting human nature? It depends, because nature is what we make of it. In a much-quoted analogy, famed primatologist Jane Goodall liked Trump’s mannerisms to “male chimpanzees and their dominance rituals”:

In order to impress rivals, males seeking to rise in the dominance hierarchy perform spectacular displays: stamping, slapping the ground, dragging branches, throwing rocks. The more vigorous and imaginative the display, the faster the individual is likely to rise in the hierarchy, and the longer he is likely to maintain that position.

For these observations to apply to any male politician is to invoke essentialist assumptions regarding what zoologist Desmond Morris famously called “man, the naked ape,” meaning certain ideas regarding biologically determined or essential “nature” are being invoked to explain human social behavior.

OK, but it’s worthwhile noting two details: 1. Those behaviors establish dominance among male chimpanzees, meaning they chiefly impress other males (see "The Three Stooges," which many women dislike). 2. Female chimpanzees neither participate in these performances nor do they particularly care about them, and Goodall herself seems to regard their antics with amusement. Like McKayla Maroney, she is not impressed.

So if we’re going to look to primates as a way to explain the strange fascination that Trump holds over the very male-dominated press, consider by contrast the behavior of bonobos. Like chimpanzees, they are closely related to humans and share 98.7 percent of our DNA. Unlike chimps, however, their society is female led and, in lieu of chimpanzee aggression and warfare, bonobos resolve conflicts with group sex. Perhaps even more amazingly, the females band together to control unruly males, which not only works but the bonobos seem all the happier for it.

Although female bonobos are about 20 percent smaller than males — roughly the same ratio as is the case for chimps and humans — they dominate males by sticking together. If a male gets out of line and harasses a female, all the other females will gang up on him. This sisterly solidarity, combined with lots of sex, tends to keep the males behaving politely.

The point is that humans are neither chimpanzees nor bonobos, but it’s also the case that women view Trump differently than do men. Instead of being endlessly fascinated by him, great swaths of women (as distinct from girls) are loudly proclaiming they're appalled. That’s not sexism. It’s pragmatism. Poll after poll has shown that Trump performs poorly with women for reasons ranging from his gleeful chauvinism to his long record of business failures. All the way back in April of this year, 7 out of 10 women viewed Trump unfavorably, whereas on the eve of the first debates, Clinton now leads Trump by 57 percent to 32 percent among college-educated white women.

Not all women support Hillary, of course. Millions are voting for Trump. This is the U.S. of A.; diversity of opinion and a diverse population make this country great. But as Propane Jane tweeted earlier this year, “The lesson of Obama in 08 and 12 is that women and people of color finally have the numbers and power to beat White rage at the ballot box.”

The bigger question is whether there is sufficient political will for these groups to collectively band together or if ideological squabbling and urban tribalism will let white rage win. The really maddening bit? No matter who wins, the chimpanzee candidate or the bonobo nominee in this Chinese Year of the Monkey (which 2016 happens to be), it’s hard to shake off the feeling that we the people are going to get royally screwed.